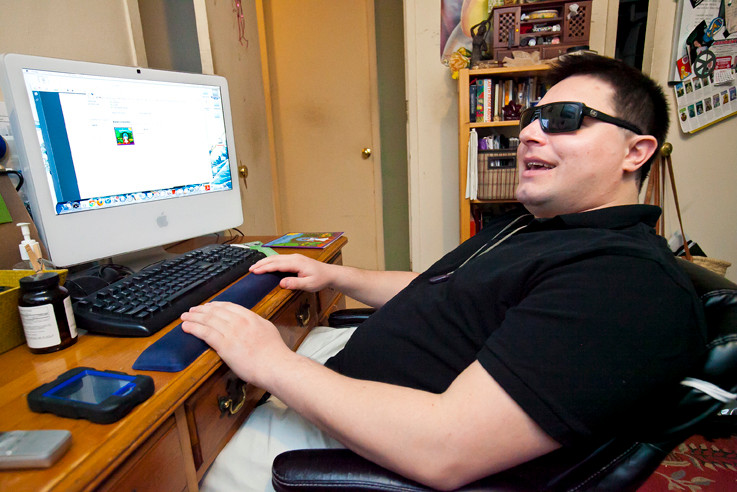 The whole book is true, even the part about the pizza guy, Andrew Kranichfeld boasts.

The 28-year old Kingsbridge resident’s first children’s book, Karen’s Garden, is the true story of his mother, Karen, who cultivated an enormous garden at the Kranichfeld home in Rye, N.Y. She grew so many tomatoes that she gave the leftovers to her friends, co-workers and even to the local pizzeria in exchange for pizza.

Every part of Andrew Kranichfeld’s story is true as well, even the crazy parts.

After graduating from Manhattan College in 2007, Mr. Kranichfeld dedicated his time to taking care of his mother, who was suffering from leukemia. She died in 2010, and he said he was concentrating so much on helping her that he didn’t pay attention to his own health. Days after her death, he found out he had a brain tumor.

A few months later, he lost his eyesight because the tumor was misdiagnosed and he is now completely blind.

He’s taken it in stride.

He’s organized charity hockey tournaments in the town he grew up in, Rye, N.Y., writes for an appropriately titled blog, sitebeyondsight.blogspot.com, and self-published Karen’s Garden in September.

“I was trying to think of a way to memorialize my mom and make a tribute to her. I just started jotting it down to her,” he said about the book.

He studied film and broadcasting at Manhattan College and when he was in school, he loved video editing.

“I can’t video edit,” he said, but with voice software on his Apple computer and devices, he said, he’s otherwise able to lead a very normal life.

“I play fantasy football. I can e-mail ... It’s crazy, I can do online banking” he said.

He hasn’t been able to see his friend Andres A. Pratts’ illustrations of the book he wrote with voice software, but he’s had people describe them to him.