If you’re an adult and live in New York City, you’re now eligible for booster shots at local pharmacies 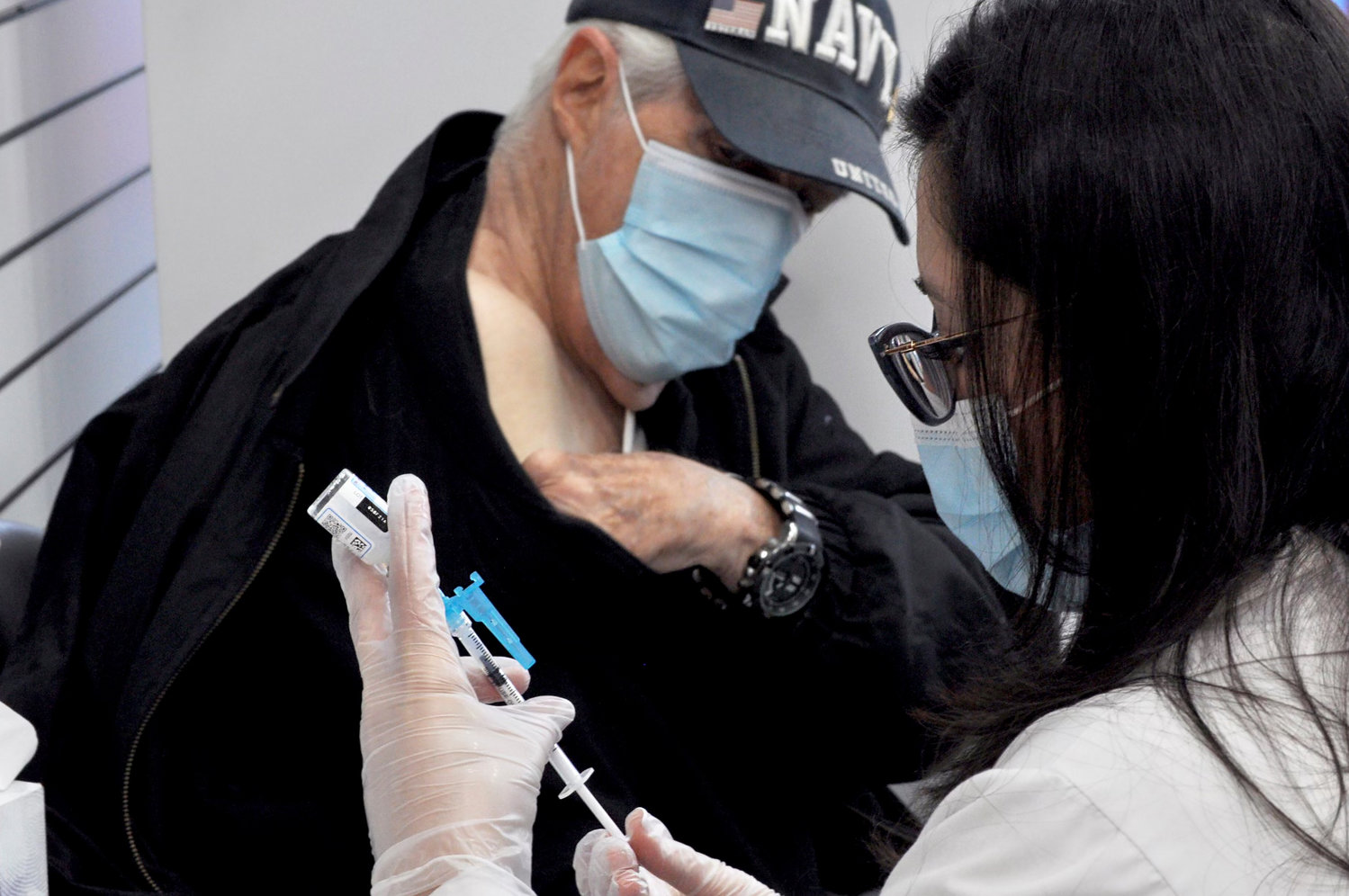 Booster shots of the coronavirus vaccine is now available for anyone in the city 18 and older. That means it’s all hands on deck for family-owned shops like Riverdale Specialty Pharmacy on Johnson Avenue as the take daily phone and walk-in appointments for the Moderna booster shot.
SARAH BELLE LIN 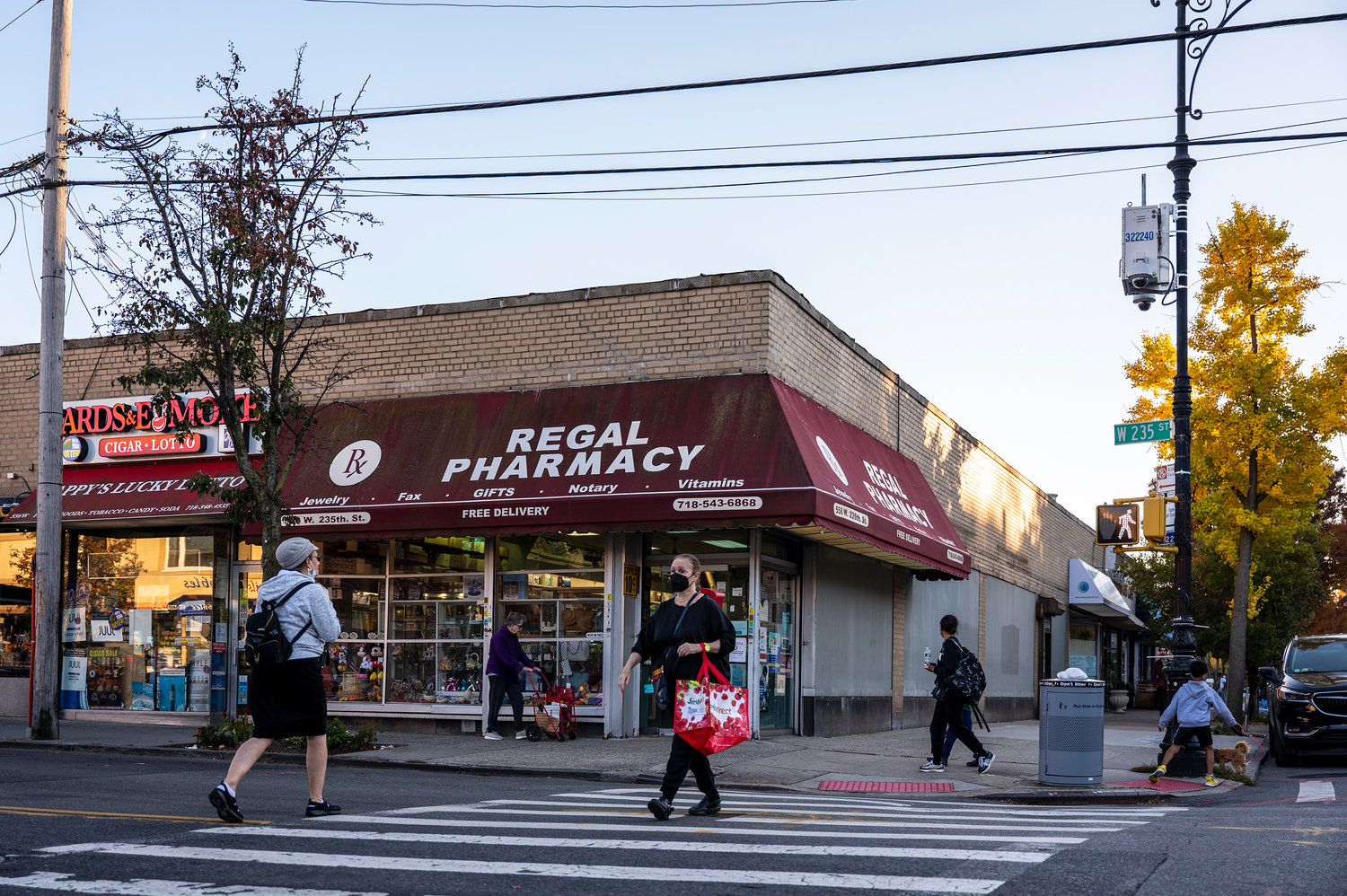 Local pharmacists, like Robert Newman of Regal Pharmacy on West 235th Street, have been busy with a renewed sense of purpose and duty vaccinating people with booster shots against the virus that causes COVID-19.
HIRAM ALEJANDRO DURÃN 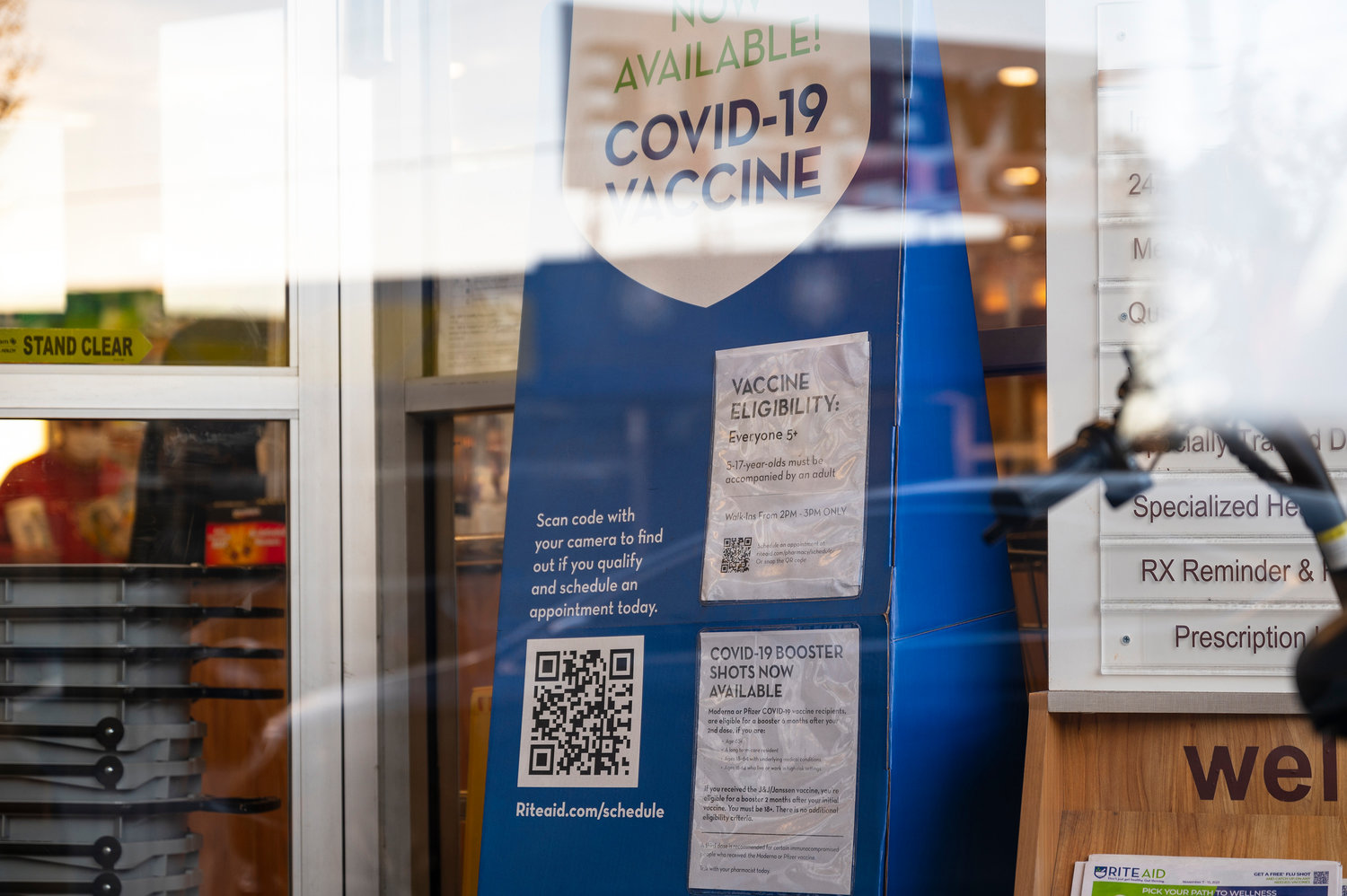 The Rite Aid Pharmacy at West 238th Street and Broadway in Kingsbridge now offers the Pfizer coronavirus vaccines for young people between 5 and 11. New York City — once the epicenter of the coronavirus pandemic — now has some of the highest vaccination rates in the country, which also is reflected by the city’s continued low infection rate.
HIRAM ALEJANDRO DURÁN 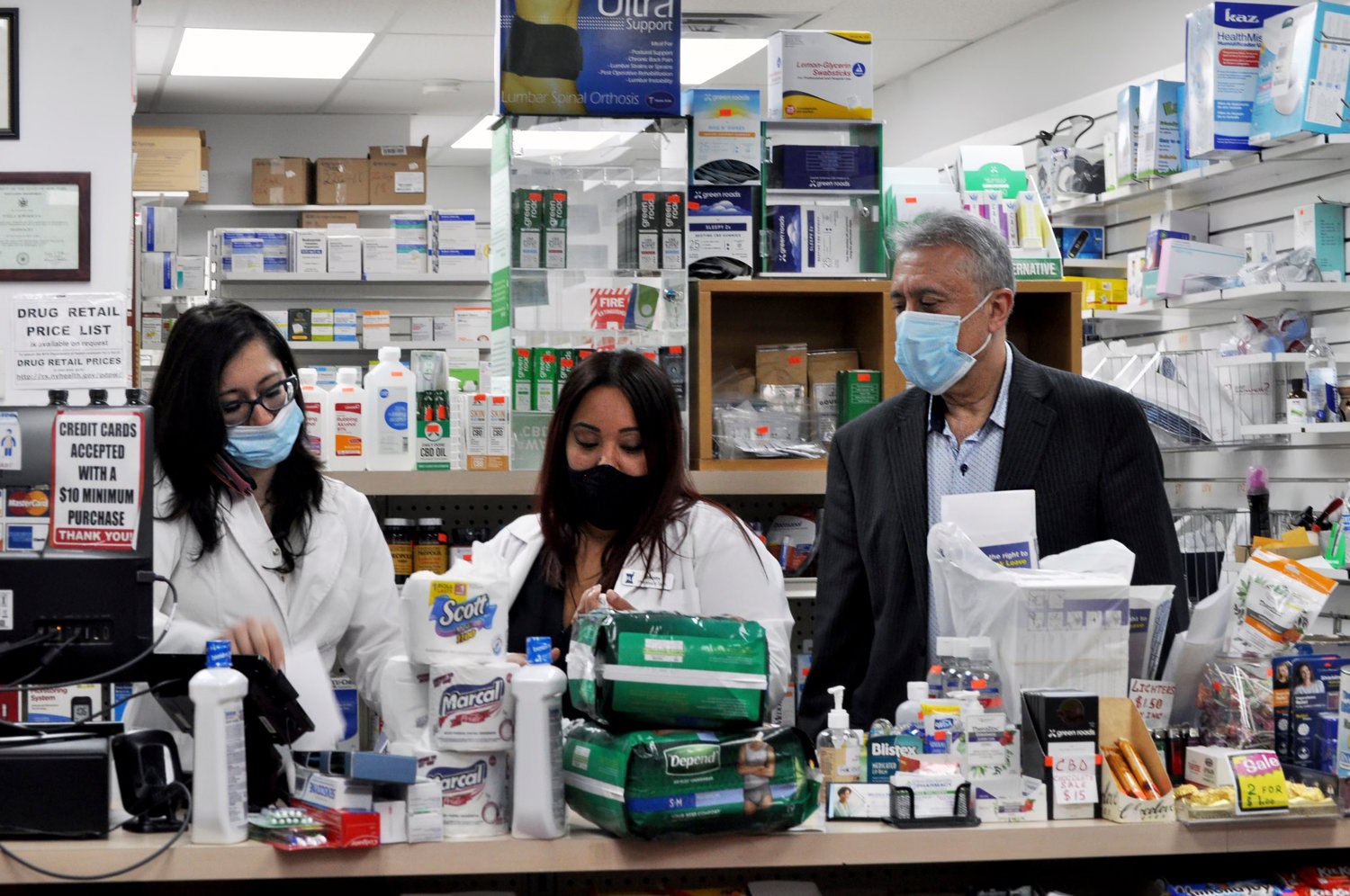 Booster shots of the coronavirus vaccine is now available for anyone in the city 18 and older. That means it’s all hands on deck for family-owned shops like Riverdale Specialty Pharmacy on Johnson Avenue as the take daily phone and walk-in appointments for the Moderna booster shot.
SARAH BELLE LIN
Previous Next
By SARAH BELLE LIN

It’s always been a family affair, but the coronavirus pandemic has taken Stella Borukhova’s pharmacy on an especially rocky “rollercoaster” of a ride.

Borukhova is the lead pharmacist at her family-owned Riverdale Specialty Pharmacy on West 236th Street and Johnson Avenue. Just recently, the pharmacy rolled out its Moderna vaccine booster shots with appointments to get it quickly nabbed not only over the phone, but from customers walking in.

“There’s a very high demand,” said Borukhova, who says she easily vaccinates dozens of people every day. “We’re not doing the Pfizer — we might be doing it later on. And we’re not vaccinating children at the moment.”

Maureen and Bill Lipman consider themselves “Stella fans,” arriving at Borukhova’s storefront on a recent Friday for their Moderna shots. Maureen said she’s got family members who are having a “hard time” deciding on the booster shot. She hopes more people will come around to it, the same way culture generally adapts to other safety measures.

“They forget that they were told to put car seatbelts on, (that) them and their kids got shots for measles and mumps, and that we have to drive 25 mph now in Riverdale,” Maureen said. “They forget all that.”

Other than regular family get-togethers, the couple had another momentous reason for getting the booster: “It’s our 65th anniversary,” Bill said.

“If you can do that,” joked Maureen, “you can do anything.”

Afterward, the steady-going couple celebrated their vaccinations with Subway sandwiches.

The city’s health department opened eligibility for booster shots on Nov. 15. Now, any adult who received their Moderna or Pfizer shots at least six months ago — or their Johnson & Johnson shot at least two months ago — can make online appointments for their booster.

Dr. Vanessa Pratomo just began administering the Moderna booster at her own pharmacy. A family physician at Montefiore’s Marble Hill office near West 230th Street and Broadway, Pratomo knows there are some who are confused about whether to get booster shots, but she’s ready to take their questions.

“What I’m finding is that most patients who have already received the primary series don’t have a lot of vaccine hesitancy,” Pratomo said. “Most of them are interested in the booster shot. They’re just waiting for it to become available to them.”

As a health care worker and breast cancer survivor, Mary Ellen Gibbs has been through too much to play around with her health.

“Not out of the woods yet,” said Gibbs, who is now on the verge of remission. “Going through breast cancer — treatment and surgery and everything — I wasn’t taking a chance on getting sick.”

In fact, this third dose is really meant for those who are severely immunocompromised, Pratomo said, adding this category might include organ transplant recipients or those on heavy-duty “immunosuppressive” medications.

“The booster is really applicable to a much broader range of people,” Pratomo said, “so anyone 65 and older, that’s really the largest group that we see in our offices.”

Gibbs was scheduled to get the Pfizer booster this month at work. While some might avoid vaccinations because they’d feel like test subjects, Gibbs has what she says is a better reason for getting the shot.

“Well, I don’t feel like we’re being guinea pigs,” she said. “To me, I’d rather take a little uncomfortableness than have a ventilator down my throat.”

Rabbi Gabriel Kretzmer Seed works around a lot of unvaccinated people as a prison chaplain, so getting the vaccine is more not just for his sake, but others’, too.

“Where I work had been hit so hard by COVID and continues to be,” said Kretzmer Seed, who drove to Rite Aid for his Moderna booster.

The booster did make him feel achy and tired for a couple days. He’s not surprised, because his second shot originally caused him to feel feverish and  “icky.” This time around, he suffered a bit through Thursday evening and the following Friday. “And then I woke up Saturday morning and felt 100 percent better.”

Pratomo expects the booster’s side effects to parallel any symptoms someone may have experienced from their second COVID-19 shot.

“People often wonder whether it’s going to make them feel worse than the primary series did,” she said. “We really expect the side effects to be similar. So if you had soreness in your arm, you can expect to have that soreness in your arm again. If you felt tired, you should expect to feel that similar fatigue or headaches or whatever you had after the first and second dose.”

A “part-time caregiver for her mother,” Wendy Levinson just received her Pfizer booster at the Rite Aid on West 238th Street and Broadway.

“What’s the expression? COVID fatigue?” said Levinson, acknowledging how people miss a sense of normalcy. But be as she may, she’s just not willing to put her mother’s life on the line.

“I really do everything to ensure that I’m healthy and safe,” Levinson said. “So when I go into her home, I’m not compromising her health and safety.”

Regal Pharmacy, just down the road from Borukhova’s storefront, now has the capacity to vaccinate up to 20 people a day with the Moderna booster. So far, Robert Newman has been vaccinating primarily senior citizens.

“I still got a few more years to go before I retire,” the supervising pharmacist said. “Then COVID comes. I feel like COVID has kind of given my pharmacy career a shot in the arm. Like there’s a renewed purpose.”

He’s already given more than 150 booster shots up to the start of November, and feels pleased about making a difference in his community before finally actually retiring.

Pratomo is astonished by some of the concerns she hears from unvaccinated people, especially those involving some of the common side effects people may experience when they get the shot.

“Things that really surprised me, like the COVID vaccine might make them more likely to pass COVID on to others,” Pratomo said. “That’s not founded in any scientific literature at all.

“I really encourage any patients, any members of the community who have questions, to talk to a medical professional. Make an appointment with your primary care doctor and really get those specific questions answered by someone in the medical field.”