City officials say they are pumping cash into homelessness and schools 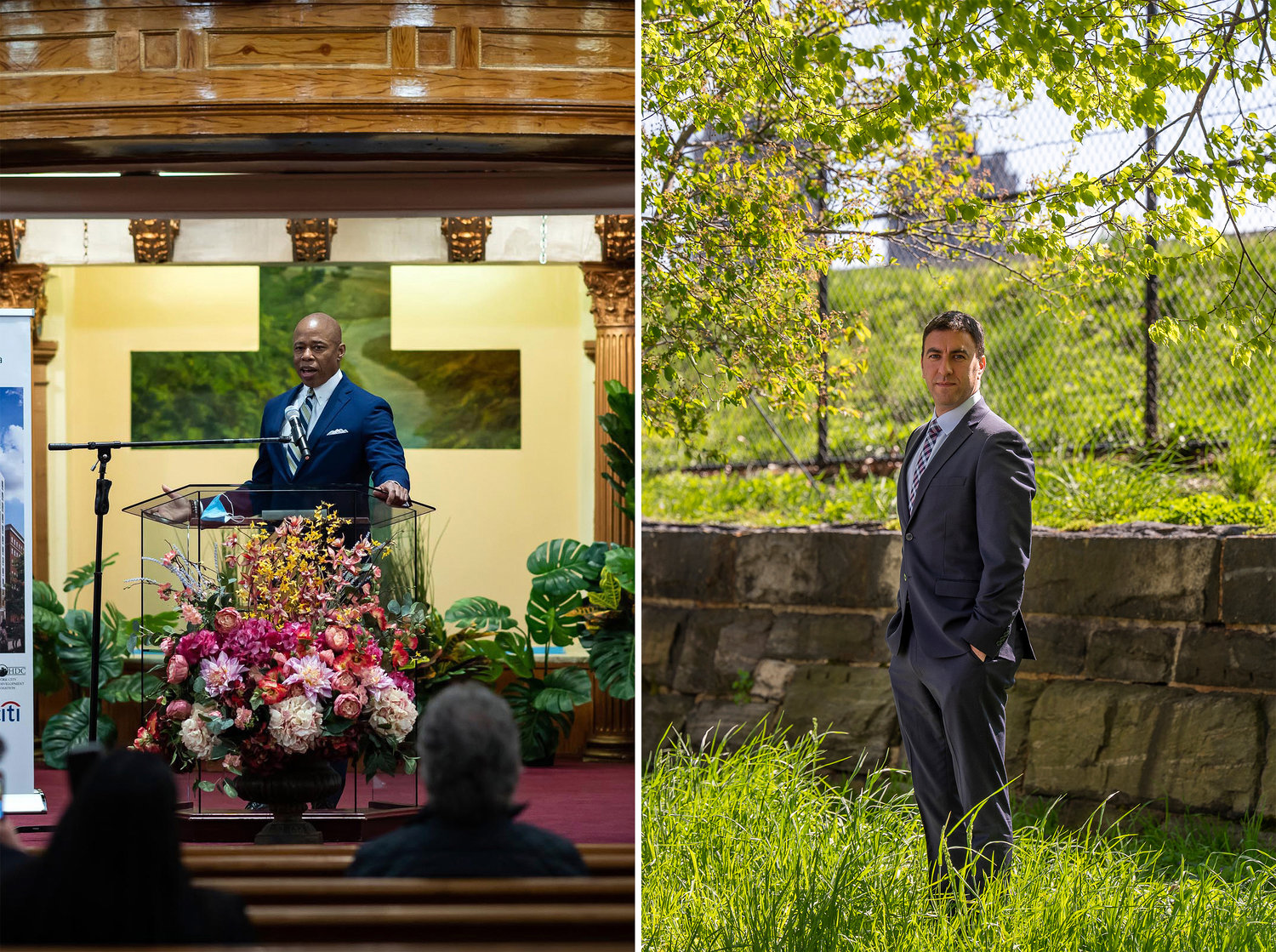 At left, Mayor Eric Adams delivers remarks at the Hanson Place Seventh-Day Adventist Church affordable housing groundbreaking. 88 Hanson Place, Brooklyn. At right, before he was elected to the city council, Eric Dinowitz was a public school special education teacher. And he believes that experience will prove formative now that he can impact city policy on a higher level in his new role as a councilman.
Hiram Alejandro Durán
By GARY LARKIN

“I appreciate many aspects of the mayor’s executive budget, and my colleagues and I on the budget negotiating team will be working to ensure that the investments we make serve all New Yorkers,” Councilman Dinowitz said.

For Gibson, the mayor’s budget is a good start toward bringing the city back from the economic and physical impact of the pandemic.

“As we continue to work together towards creating an equitable recovery from COVID-19, it is up to us to work with our partners on the local, state and federal level to develop plans that will move our borough forward, and invest in our city’s future,” she said shortly after the mayor gave his first state of the city address April 26. “It is important that the Bronx is included in any conversation around economic recovery and investment.”

The mayor’s plan uses new revenues and savings to make investments that boost public safety, advance the city’s recovery, make New York City streets safer, upgrade parks, and provide compassionate care for the most vulnerable New Yorkers, according to a statement from the mayor’s office.

In the financial plan, fiscal 2022 and 2023 remain balanced, with manageable outyear gaps of $3.9 billion, $3.4 billion, and $3.7 billion, respectively, over fiscal 2024 through 2026, respectively. With $200 million added to the city’s rainy-day fund, budget reserves are now $6.3 billion — the highest level in city history. The budget reflects $411 million in savings over fiscal  2022 and 2023, bringing total savings achieved in the administration’s preliminary and executive budgets over those years to more than $2.4 billion.

“The pandemic has hollowed out our economy and threatened peoples’ livelihoods, stability, and mental health,” Adams during his state of the city speech. “Housing prices remain out of the reach of the working people of this city. Too many of our brothers and sisters are living on the streets, in need of support and shelter.”

At one point in the speech, he emphasized what the pandemic has done to the city’s youth and their education. He cited his administration’s expansion of the Summer Rising program, which provides academic support, arts, recreation and food to students in the summer.

“While all New Yorkers were impacted by the pandemic, our children and students are still feeling the effects of two years of grief, trauma, and learning loss,” Adams said. “We are proud that we successfully kept schools open and students safe, but we must do more for our young people, especially when it comes to helping them train for a career. Because as I have often said, if you do not educate, you will incarcerate.”

He continued: “Student absenteeism was high, educator morale was low, and our children had fallen behind academically and socially. That is why, during the first 100 days, we committed to expanding the Summer Rising program. In the executive budget, we are adding funding to increase the total Summer Rising program capacity to 110,000 K through 8 students this year.”

Additionally, he mentioned his administration’s expansion of the gifted and talented program so it can reach every school district and make it easier for families to access the program by providing entry point in Kindergarten and third grade.

Dinowitz is most concerned about funds for education and the need to create permanent housing for New York residents.

“When it comes to education, we are proposing more funds behind the most programs that will be serving our kids, like supporting a citywide expansion of restorative justice, youth employment, English language learners, and (education department) community coordinators that will help reach our unsheltered student population,” he said.

As for housing and homeless crises, he thinks more can be done while Gibson believes the mayor’s proposed spending plan will start to get the job done.

“While an investment of $171 million to create 1,400 Safe Haven and stabilization beds is on the right track, we need to invest in permanent housing for New Yorkers,” Dinowitz said. He thinks it not only makes sense economically, but leads to better outcomes.

“We are also calling on the administration to fund more housing vouchers so that people can move out of the shelter system and into permanent housing,” he added.

Gibson was a bit more laudatory about the plan for unsheltered people in New York City.

“I applaud Mayor Adams for this decision” to invest the $117 million, she said, “and I believe it could not come at a more crucial time for our city.”