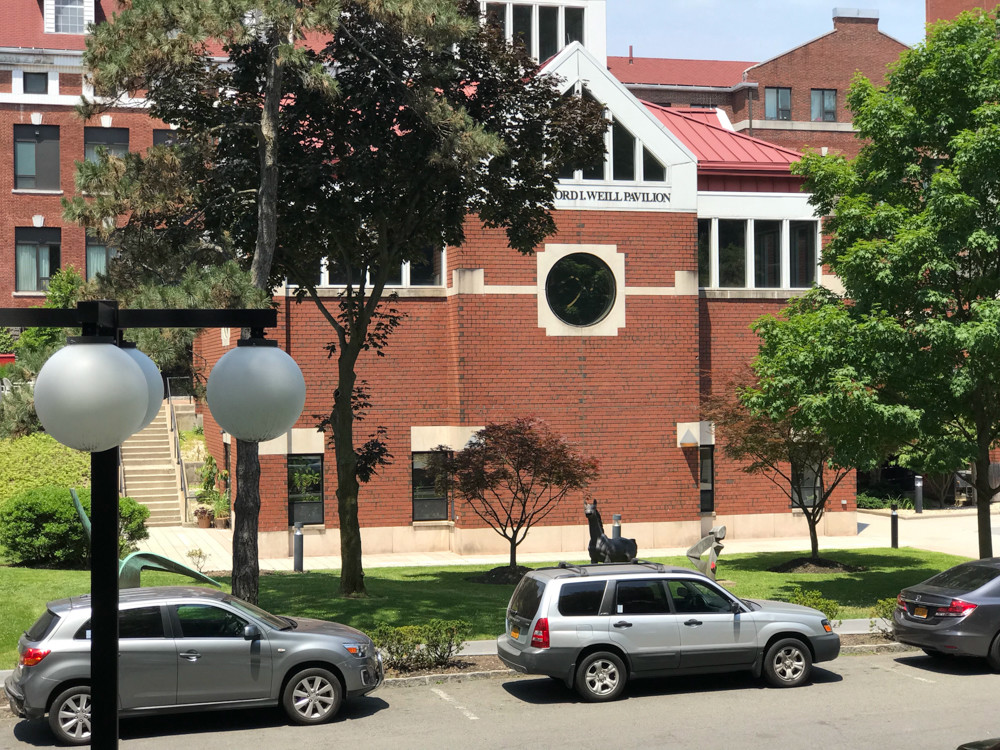 The Hebrew Home at Riverdale has faced significant pushback with its plans to build a continuing care retirement community, and not even a pair of compromises could get it past Community Board 8. However, the compromise was enough for Bronx borough president Ruben Diaz Jr., who approved the application July 30.
JULIUS CONSTANTINE MOTAL / File
Hebrew Home at Riverdale
5901 Palisade Avenue
Bronx, NY 10471
View larger map
By MICHAEL HINMAN

The proposed expansion of the Hebrew Home at Rivedale is moving forward, but a little shorter than before.

Bronx borough president Ruben Diaz Jr., recommended Hebrew Home's plans to build New York City's first continuing care retirement community on its Palisade Avenue property, so long as the non-profit follows a previous compromise agreement that would reduce its tallest building from 12 stories to a height no taller than its Resnick Building structure, and the two smaller structures by a single story each.

"It is my full belief ... that the Hebrew Home has acted in good faith towards a resolution to issues raised," Diaz said in his written recommendation. "The changes made over time address several of the community concerns."

The Hebrew Home has struggled to get surrounding neighbors to agree on a compromise to its original plan of a 12-story building on its north Palisade campus, along with a six- and four-story building on a parcel of land where the former Passionist Retreat building currently sits. Neighbors felt the development so close to the river would block views and disrupt environmentally sensitive areas — something Community Board 8 agreed with when it voted down the request last month.

Although Diaz wasn't present at a July 12 official presentation by the Hebrew Home, he said he met with many of those involved in the project, as well as the neighbors who opposed it.

"It was unfortunate that many of these issues could not be addressed at the community board level," Diaz said.

In all, eight people spoke in support of the expansion at the July 12 hearing, while 11 were against. Afterward, Diaz received another 21 written testimonies opposing the project.

Yet, the 2016 amendments to zoning regulations were designed to encourage the construction and expansion of senior housing and elder care facilities.

"Today, New York City is home to more than 1 million people over the age of 65, and by the year 2040, one in every five New Yorkers will be 60 years or older," Diaz said. "Housing that accommodates that accelerated growth of our diverse aging population is a critical component in ensuring the health and well-being of our residents and communities."

With Diaz's recommendation, Hebrew Home's application now moves on to the City Planning Commission, which has two months to either approve or deny, before heading to city council.

"We appreciate and are encouraged by the Bronx borough president's support of River's Edge," Hebrew Home spokeswoman Wendy Steinberg said in a statement. We "look forward to continued dialogue and collaboration with community groups.

"River's Edge will provide peace of mind to older New Yorkers, providing connection and community, and health care as they age. River's Edge will be an exciting and important addition to the Bronx and New York City."

Martin Zelnik, a local architect who owns property near the Hebrew Home, cited the work of groups like the Riverdale Community Coalition and the Riverdale Nature Conservancy who "worked extremelty hard" to achieve Diaz's support of a compromise.

"BP Diaz supports this compromise which, while far from ideal, is the very best that either side could achieve," Zelnik said, in a statement. "I would personally acknowledge the significant contributions made by the CB8 board and land use committee for truly providing a reality check in its courageous vote to oppose the Hebrew Home's CCRC submission. They understood the need to stand strong for the 197a Plan conceived 15 years ago by Riverdalians."