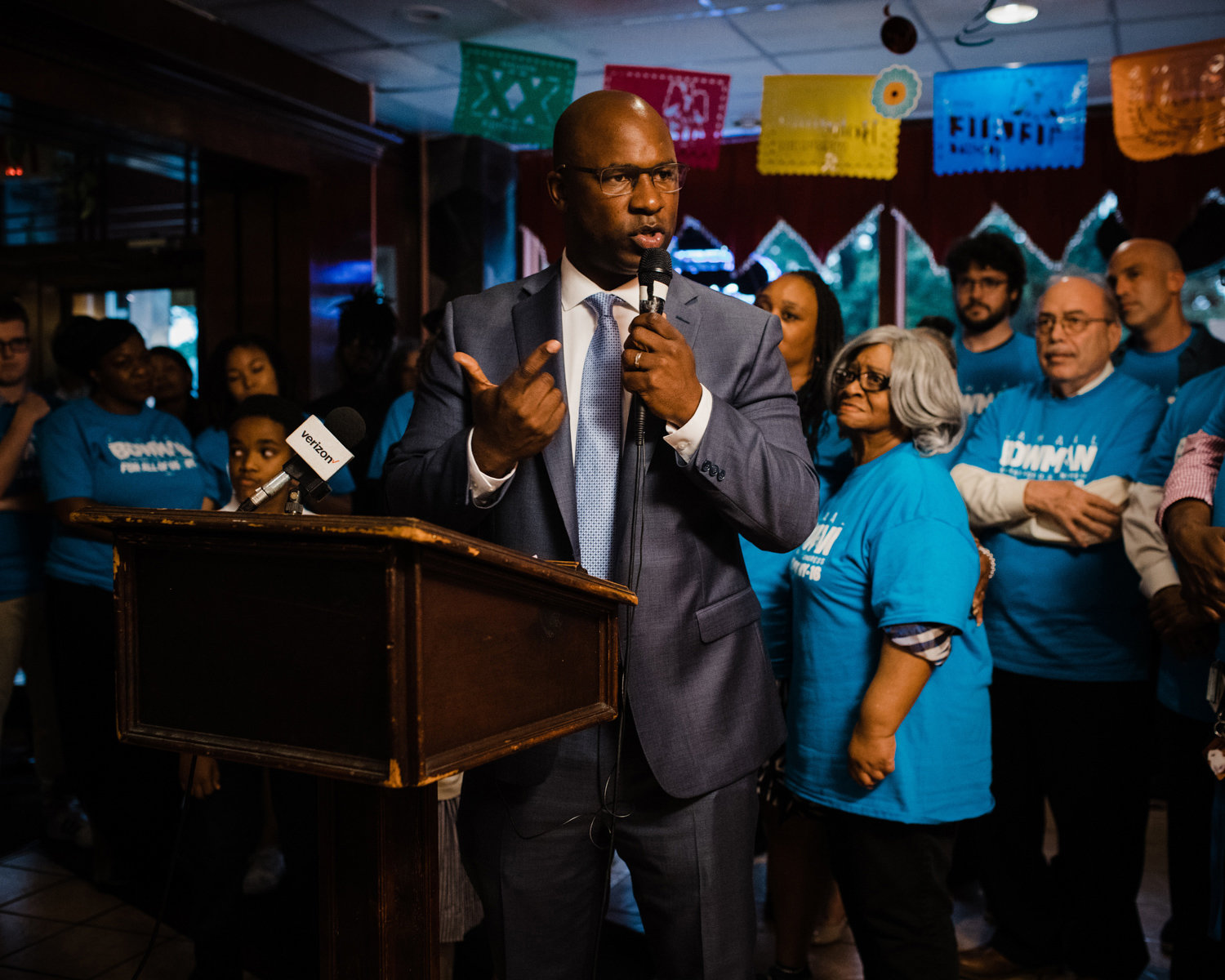 During his campaign, Jamaal Bowman was up against powerful incumbent Eliot Engel. But Bowman says the power comes from his constituents, and he’s ready to ‘fight like hell’ to improve their lives from Washington.
Corey Torpie Photography 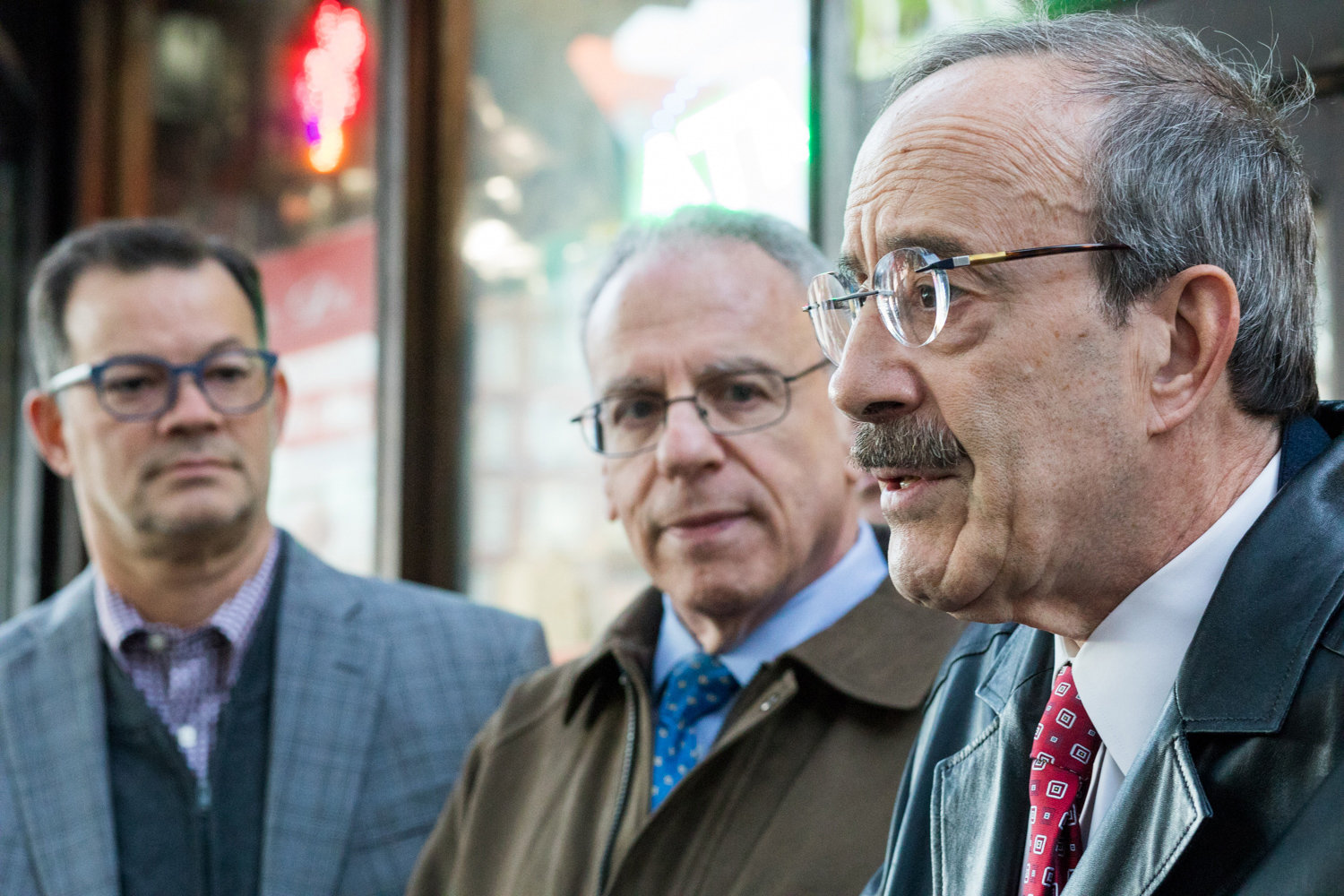 Eliot Engel, a 30-year congressional incumbent, was unseated by progressive Jamaal Bowman in the June primary. After the general election, Bowman is officially preparing to head to Washington.
JULIUS CONSTANTINE MOTAL / File 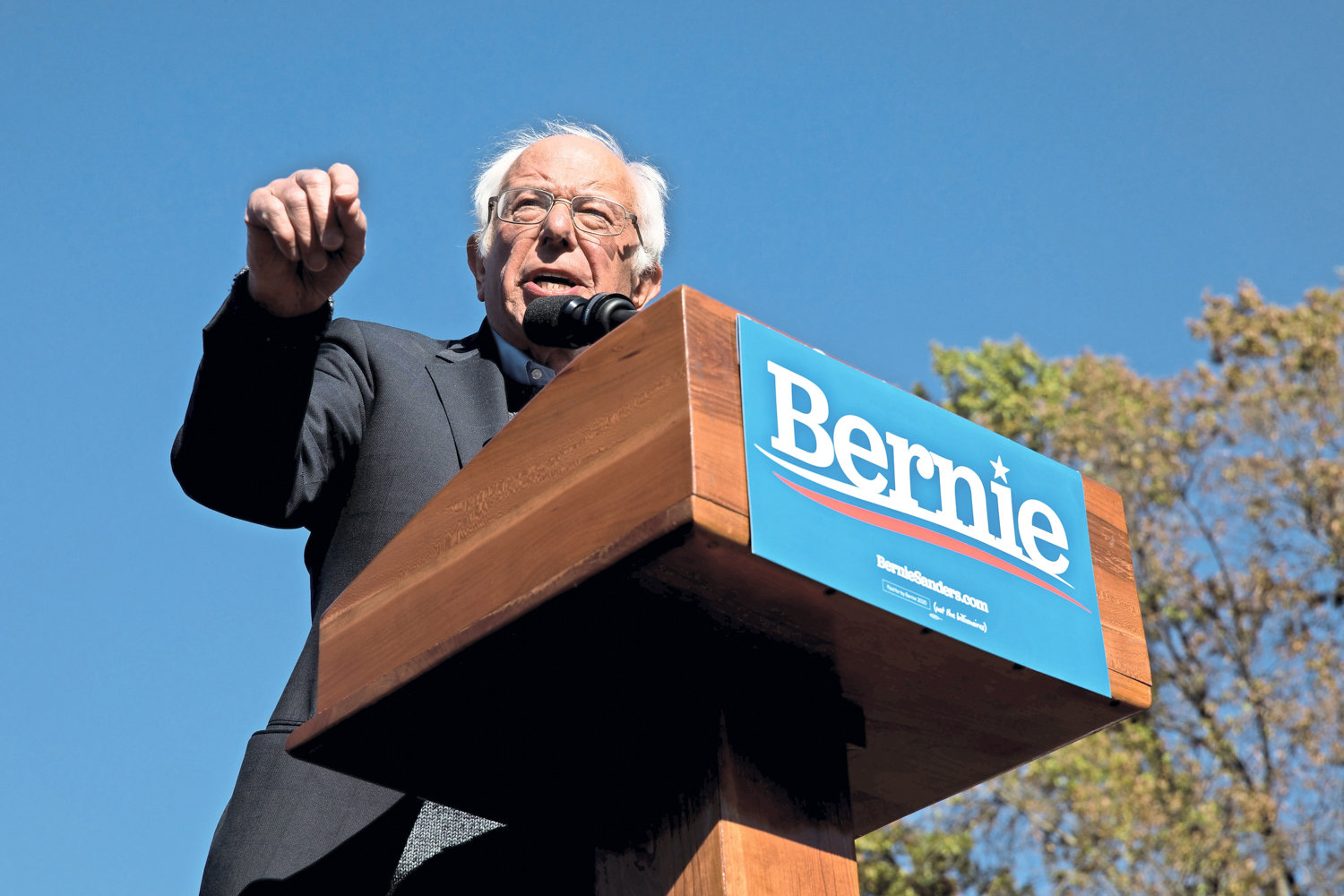 Backed by pillars of the progressive movement like Bernie Sanders, candidates like Jamaal Bowman, Alexandria Ocasio-Cortez and Cori Bush are becoming nationally known faces championing causes like the Green New Deal and Medicare for All.
JULIUS CONSTANTINE MOTAL / File 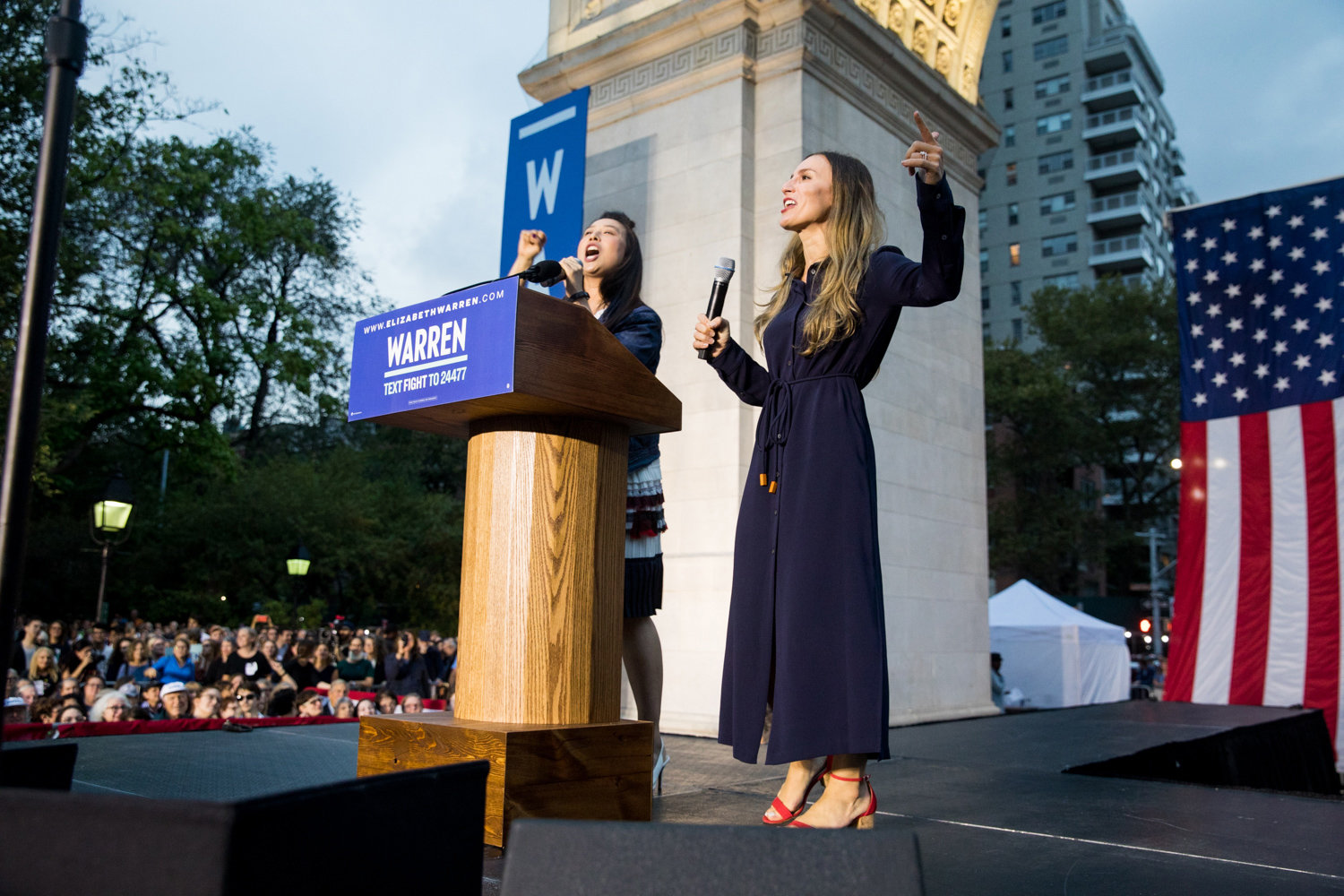 Alessandra Biaggi, whose 2018 win against Jeff Klein kicked off new progressive leadership in this part of the Bronx, rescinded her endorsement of Eliot Engel in June to support Bowman, saying she wanted to support the leadership of the future.
JULIUS CONSTANTINE MOTAL / File
Previous Next
By KIRSTYN BRENDLEN

It’s almost impossible to dispute. New members of Congress don’t have as much experience or power as their veteran colleagues. And because of that, they might not be as effective.

That was a common refrain during the campaign to become the next representative in the U.S. House for this part of the Bronx. Eliot Engel had served these same constituents for 30 years, building significant personal and political connections in the House, leading to ultimately chairing the House Foreign Affairs Committee.

It was a snapshot into conversations that would start after the general election. Democrats didn’t take as many seats in the House as they had hoped, and some politicians and analysts pointed fingers at progressive Democrats like Alexandria Ocasio-Cortez, who has become the de facto head of the party’s seemingly ultra-progressive wing.

Ocasio-Cortez hit back on those critics, however, saying she and other progressives had been unseating “powerful” Democrat incumbents since she beat 20-year incumbent Joseph Crowley in 2018. AOC endorsed Jamaal Bowman’s campaign in June, joining former presidential candidates — and progressive U.S. Senators — Bernie Sanders and Elizabeth Warren.

“The reality is, the majority of people across the country are ready for transformative change,” Bowman said. “The American people are ready for leaders who are talking about issues that connect to their everyday lived reality. Issues like ending poverty, challenging racism in all its forms, raising the federal minimum wage, holding police accountable, ending food insecurity, funding our public schools, and treating health care and housing as a human right.”

Bowman’s district first saw some big change on the state level. In 2018, as Ocasio-Cortez shocked the country with her own win, Alessandra Biaggi was busy toppling Jeff Klein in the state senate after what had been a comfortable, yet controversial, 20 years in office.

“This is about the candidates who are standing up and saying, ‘The basic needs of people in these districts are not being met. Here are ways that we can solve these problems.’”

In the Bronx in particular, she said, elected officials haven’t done enough to improve the health of their communities by addressing the borough’s longstanding issues like poor access to doctors and hospitals, as well as poverty. Showing up every year to hand out turkeys is important for families who can’t afford them, Biaggi added, but it’s also important to think about why they can’t afford them and start to solve those problems.

It was issues like that which prompted Biaggi to pull her endorsement of Engel a few weeks before the primary, and instead back Bowman.

It was definitely a mind change, but there was good reason, Biaggi said. When she backed Engel in 2019, she believed it wasn’t the time to primary Democrats, but to instead focus on the presidential election. After the country was slammed with the coronavirus pandemic, things changed “practically 180,” and it was time to have “the leadership of the future” in the district.

Bowman agreed. The perceived divide between progressive and moderate Democrats isn’t important, he said. But being able to work together to make notable changes in the lives of constituents is important.

“COVID-19 relief, Medicare for All, a homes guarantee, and a Green New Deal with a federal jobs guarantee — these are the issues that matter the most to voters in my district, and the issues that my campaign was focused on,” Bowman said. “All Democrats — moderates and progressives alike — need to respond to the needs of their constituents if they hope to connect and engage with the voters in their district.”

Throughout the campaign, Bowman has taken to social media to joke about joining “the Squad,” a group of four congresswomen who took the progressive wing of the party by storm: Ocasio-Cortez, Ayanna Presley, Rashida Tlaib, and Ilhan Omar. All elected in 2018, the four have been the subject of myriad praise — and criticism.

And although their names may have been new to many Americans when they were first elected, they quickly became the face of a movement. And some of the best-known faces in politics, at that.

“The reason so many Americans have been drawn to the Squad is because we finally had people in government who were talking about the issues and needs that are connected to the lived reality of the poor and working class,” Bowman said.

Bowman joined his fellow newly elected representatives in Washington last week for orientation. There the congressman-elect posted photos meeting Cori Bush, another new Squad member. Bush ran in Missouri’s First Congressional District in 2018, losing to incumbent Lacy Clay, who had represented the district since 2001. Clay’s father, Bill, had held the seat since 1969.

Taking another crack at the seat in 2020, Bush picked up endorsements from Sanders and Bowman himself, ultimately winning her August primary against Clay.

Bowman and Bush already are receiving national attention. And while he may not be likely to receive a high-level committee appointment like his predecessor, Bowman said his job isn’t to sit on those committees, but to deliver for his district.

“The people, through their vote, have authorized me to exercise power in Congress on their behalf. But our power is collaborative,” Bowman said. “Having seniority or a prestigious committee assignment doesn’t mean a whole lot to constituents who don’t have health care, can’t pay the rent, (and) whose kids don’t have enough to eat.”