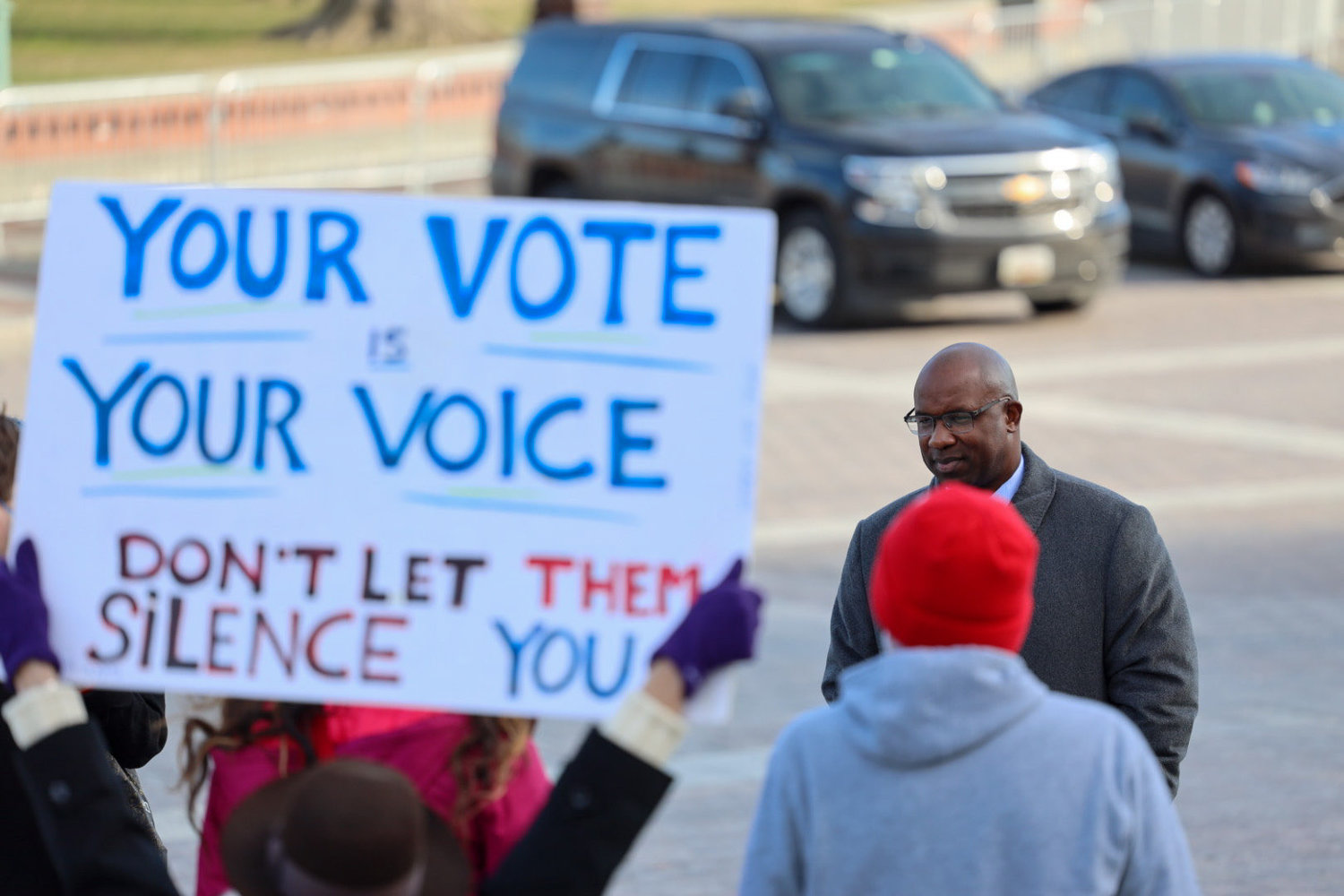 U.S. Rep. Jamaal Bowman joins member of the progressive youth political group un-PAC in front of the U.S. Capitol Building shortly before he was arrested Thursday. Bowman says the need to reform voting laws is vital, and that while he's not challenging Thursday's arrest, he would certainly do it again.
Courtesy of U.S. Rep. Jamaal Bowman
By MICHAEL HINMAN

Jamaal Bowman stood on the steps of the U.S. Senate on Wednesday, calling for his upper chamber colleagues to pass a bill he and Democrats say will protect voting rights — especially among people of color — across the country.

He held up a stack of papers, describing them as 33 bills passed in 19 states since the 2020 election that would restrict voting rights. The Senate could fix all of that with just a simple vote approving the John Lewis Voting Rights Act — named after the late congressman and civil rights activist — Democrats and other advocates say will restore key parts of the Voting Rights Act of 1965.

"There is a battle for the ballot box, and we can't watch it from the sidelines," Bowman later shared on social media. "Organizers did their jobs. Now it's time for the Senate to do its job."

But the Senate didn't do its job. Without the support of Republicans and a pair of swing Democrats, the John Lewis Voting Rights Act failed on the chamber floor.

Bowman — sworn in as part of the 117th U.S. Congress last year — was dejected. And understandably so. But when he arrived at the U.S. Capitol Building Thursday morning, he was very happy to see the group of young people he stood with for hours the night before were still out there.

But this time, they had company: The U.S. Capitol Police.

"These are protesters who have been on a hunger strike for several weeks — multiple hunger strikes — demonstrating in their communities, trying to push to get voting rights passed," Bowman told The Riverdale Press on Thursday evening. "So, they came down here to apply that same pressure. I wanted to be out there with them today, as well. But by the time I got there, about 20 of them had already been arrested for, I guess, being in an area they weren't supposed to be."

The congressman wanted to find out what was going on. But to do that, he had to go where even members of congress aren't allowed to be.

"I went underneath the police tape to go to shake their  hands and thank them for being there," Bowman said. "And then the cop came over and told me I was under arrest. He grabbed my arm, made me put my hand behind my back, and started to put the handcuffs on." 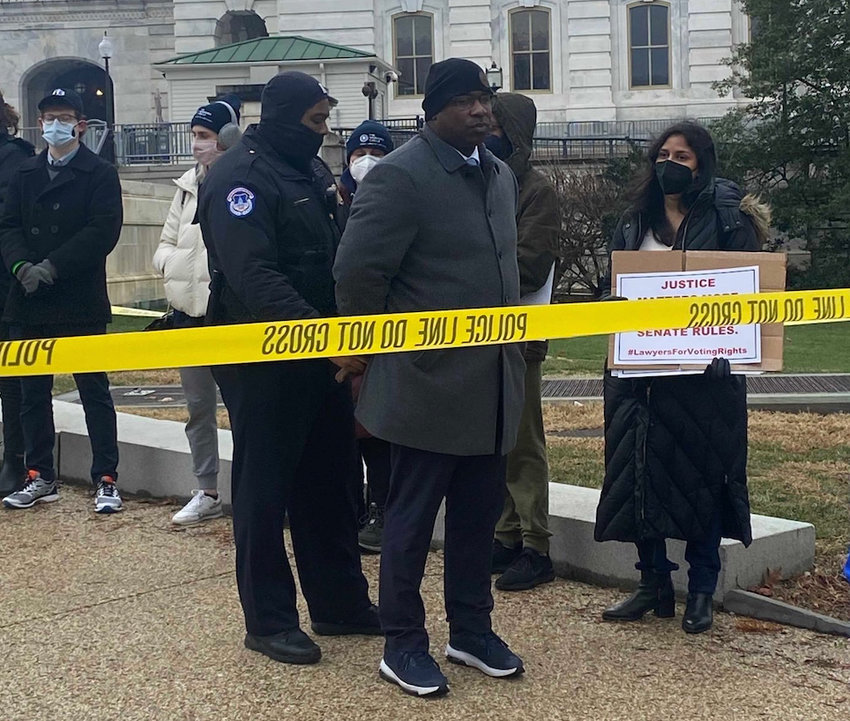 They include Ohio Democrat Joyce Beatty, arrested outside the Senate building last July, while wearing a T-shirt demanding to "protect our voting rights."

Within days, two more members of the Black Congressional Caucus would find themselves in cuffs — Georgia's Hank Johnson and Texas' Sheila Jackson Lee — over voting rights.

Bowman didn't expect to join them in that exclusive club on Thursday. But the congressman doesn't regret it. He was there to support members of a newly formed group known as un-PAC — which bills itself as the political action committee designed to end political action committees. Its agenda is considered quite progressive, tackling many of the larger issues of today like gun control, immigration, climate change and health care.

But this particular protest was focused on voting rights, specifically parts of the landmark 1965 law that many say was gutted after a pair of U.S. Supreme Court decisions in recent years. The biggest one — Shelby County v. Holder — removed the federal government's ability to require states to get its approval before enacting laws that could restrict voting in any way.

It was designed to prevent municipalities in many states from limiting turnout in minority communities.  Chief Justice John Roberts said using data from 40 years ago had "no logical relationship to the present day," adding the areas of the country covered under the pre-clearance laws no longer displayed the "pervasive, flagrant, widespread and rampant discrimination that faced Congress in 1965, and that clearly distinguished the covered jurisdictions from the rest of the nation."

But in the immediate wake of that 2013 decision, states were said to have closed more than 1,000 precincts — primarily serving communities of color — which would have been restricted under the 1965 law.

Following record turnout in the 2020 election, Republicans supporting former president Donald Trump and his unsubstantiated claims of voter fraud, moved to restrict voting even further in a number of states. That included more difficult barriers to cast a ballot — or even register — and eliminating many of the vote-by-mail options that became popular during a pandemic-era election.

"What we're seeing in states right like Michigan, and Arizona, and Georgia, and Texas and others, we see them introducing legislation that is way more restrictive than it ever was," Bowman said. "Legislation related to mail-in ballots and voter ID and drop boxes. And even changing election officials to make them more partisan.

"That's what's happening in states across the country, and it has gotten even worse since Trump's 'big lie.' It has become the main focal point of the Republican Party."

un-PAC members are primarily teenagers and young adults, Bowman said — some as young as 15 or 16, and few older than 25.

"They're putting their bodies on the line," he said. "And unfortunately, throughout American history, the most powerful way to move legislation is to put your body on the line. Fannie Lou Hamer, John Lewis, Dr. King, and so many others have done that. We see these young people do that, and I just wanted to be there to support them.

Bowman says he'll pay the fine, but he's not going to stop fighting for the Voting Rights Act. He was no sooner out of police custody when he was trying to get Senate Majority Leader Chuck Schumer on the phone, and will continue to be part of the fight to get the bill onto President Biden's desk.