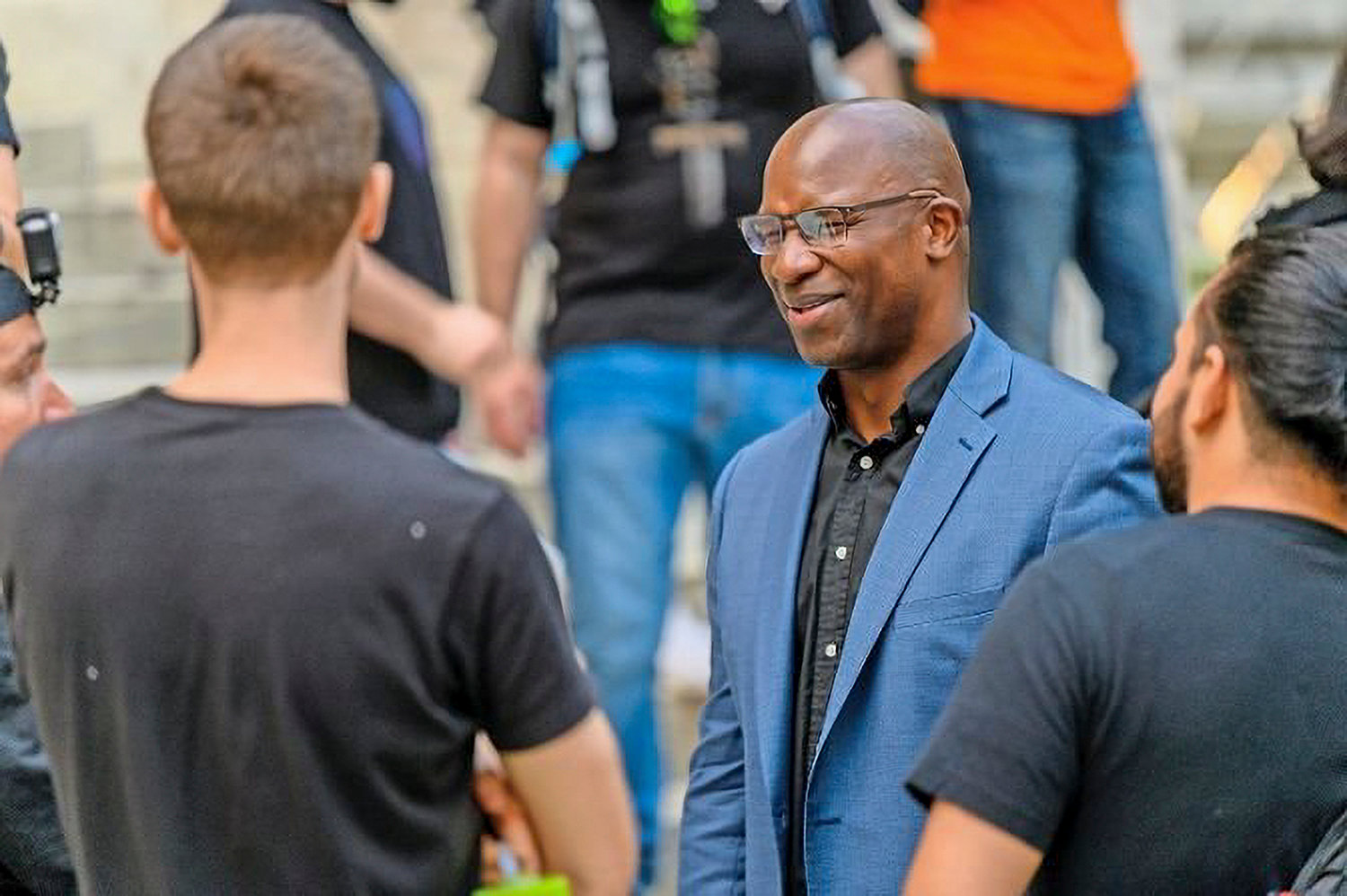 U.S. Rep. Jamaal Bowman faced an uphill battle when he ran against longtime incumbent Eliot Engel in a primary election last year. Bowman says he backed the For the People Act in the U.S. House last month so he can help more first-time candidates like him get public funding for their grassroots campaigns.
Courtesy of Jamaal Bowman Campaign 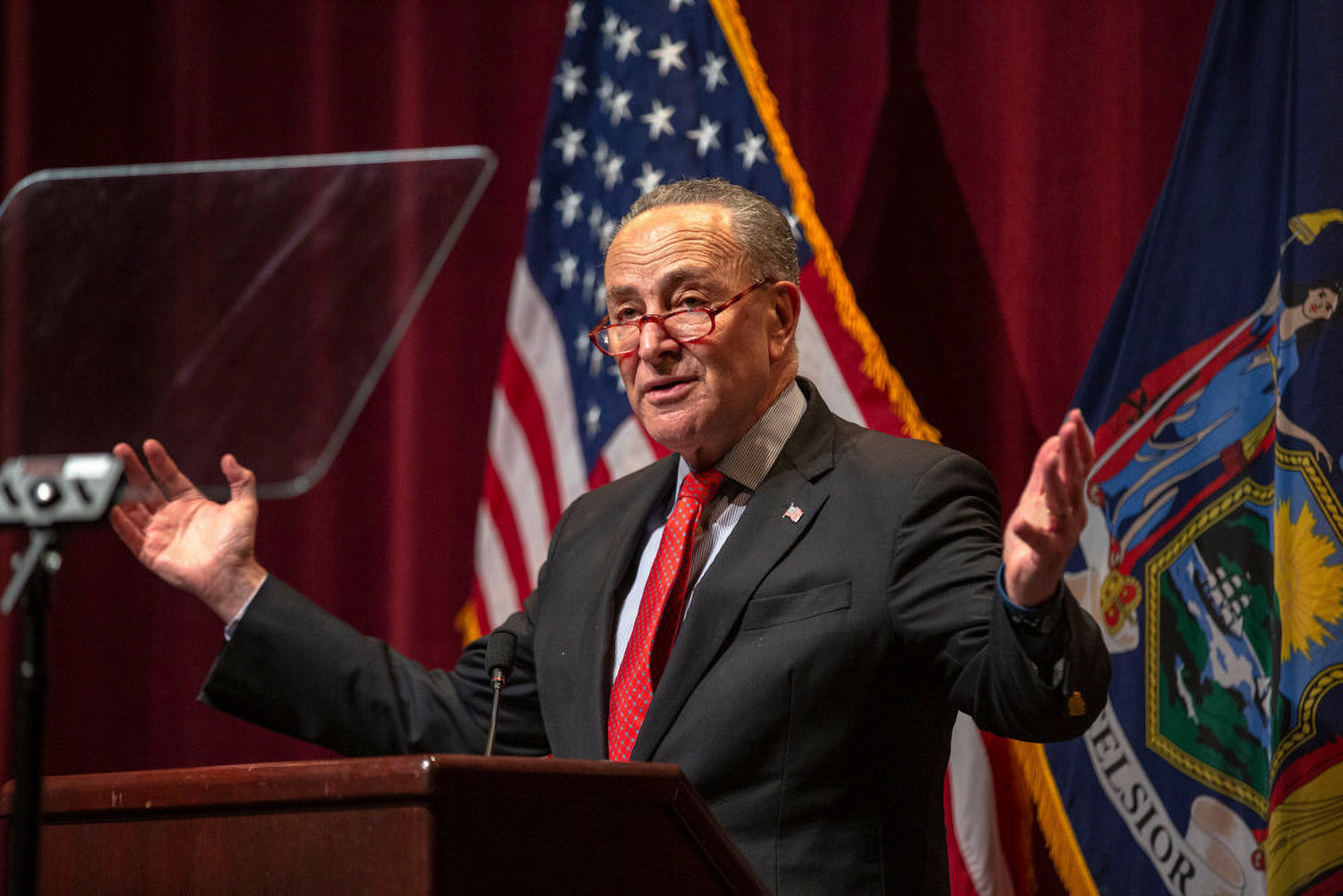 Although Senate Republicans block the For the People Act — a package of voting reforms — Senate Majority Leader Chuck Schumer says this is only the beginning of his effort to pass this bill. Helen Meltzer-Krim of Northwest Bronx Indivisible says she has no doubt Schumer will eventually succeed.
EIAN KANTOR/ File
Previous Next
By ETHAN STARK-MILLER

With no political background and minimal name recognition, Bowman faced an uphill battle against Engel, a 32-year incumbent. But against tough odds, Bowman was victorious.

That lack of name recognition and few political allies also meant Bowman had little to no access to the large fundraising apparatus available to political insiders like Engel. So instead he relied on grassroots support and small-dollar donors to propel his campaign forward.

Now Bowman wants to make it easier for more first-time candidates to run for office. That’s part of the reason why he supported the For the People Act — or H.R. 1 — last May. This massive election reform bill intends to institute a national public campaign financing system while rolling back some of the significant voter restrictions put in place by many Republican-led states.

“The public financing piece allows regular people like me — who don’t come from means, who aren’t wealthy, who don’t have corporate backers or many wealthy donors — to run for office in my community,” Bowman told a town hall hosted by the New York Working Families Party last month. He was joined by Senate Majority Leader Chuck Schumer, U.S. Rep. Mondaire Jones, and state Attorney General Letitia James.

But late last month, Senate Republicans used the filibuster — a mechanism to vote down legislation that isn’t supported by a 60-vote majority — to block the bill from even making it to the Senate floor. That left Democrats with no clear path forward on For the People without limiting or completely abolishing the filibuster.

While an outright rejection of the bill by Republicans isn’t how Bowman wanted this process to start, he admits it was expected.

“Republicans have not negotiated in good faith,” Bowman told The Riverdale Press. “They want to maintain the status quo, which is to keep the filibuster, keep corporate control of Congress, and make voting as difficult as possible for the American people. Because that’s the only way they can maintain power. So, I wasn’t surprised by that.”

There’s plenty of reforms in the bill Republicans aren’t too keen on, the congressman said. In addition to changes to how campaigns are financed, the broader bill aims to make voting more accessible and remove partisanship from the congressional redistricting process nationally.

Campaign finance reform is essential, Bowman said, to dilute the influence of big corporations and other special interests’ groups in national elections.

According to a breakdown of the legislation from the Brennan Center for Justice, For the People would implement several reforms to combat the power given to big-dollar donors through the Citizens United Supreme Court decision in 2011. That ruling recognized these large entities as individual donors and all but eliminated campaign spending limits.

“Big money controls our political arena,” Bowman said. “The reason why we cannot pass any legislation of consequence in the Senate is because too many senators are controlled by big money. And the senators continue to support policy that continues to fatten the pockets of the robber barons, which are large corporations and the wealthy elite.”

One of the ways the bill aims to break the influence of these big-dollar donors is by requiring online political advertisements to clearly show who paid for them.

Another is by implementing a national matching funds program for Congressional elections. This means if a candidate raises a certain amount in small-dollar donations, it will be multiplied using public funds.

New York City already uses a similar system. For example, if a city council candidate can convince 75 donors in their district to give at least $10 to their campaign, then the first $175 of every donation from most New York City residents will be matched eight times over by public funds.

The program has poured millions of taxpayer dollars into local campaigns, including by most of those running for the seat eventually won by Eric Dinowitz, in an effort to keep big money out.

Making voting easier and more accessible is also an essential part of the bill, Letitia James said. The state attorney general pointed to the wave of voting restrictions being passed in Republican-controlled states around the country to show why this particular provision is necessary.

Since January, at least 14 states enacted nearly two-dozen new laws making it harder to vote, according to the Brennan Center. That includes laws that shorten the window by which people can request mail-in ballots, or those that impose stricter voter identification rules at poll sites.

For the People Act would reverse most of these state-level restrictions and implement reforms, Bowman said, like ensuring all states have at least two weeks of early voting.

“This is about ensuring there are more voting machines in certain counties,” the congressman said. “Ensuring that there’s automatic registration. Ensuring that the federal law supersedes what the states are doing across the country.”

Helen Meltzer-Krim, who’s on the steering committee of Northwest Bronx Indivisible, said the most critical provision of the bill is its goal to establish non-partisan redistricting commissions. This is intended to fix the problem of partisan gerrymandering — a tactic both major political parties have used to redraw Congressional districts in their favor.

However, after the vote last month, the likelihood of this bill passing is extremely low. This is because not one Republican has indicated they’d vote for the bill, and Democrats only control the split Senate through the tie-breaking vote of Vice President Kamala Harris. Democrats can’t pass the bill on their own without eliminating the filibuster, or convincing 10 Republicans to join them.

But two Democrats are also standing in the way — West Virginia Sen. Joe Manchin and Arizona Sen. Kyrsten Sinema, who have both publicly indicated they want the filibuster to stay.

Bowman, however, remains convinced they can be swayed, paving the way to send the legislation to Joe Biden’s desk.

“Over the last several weeks, there’s been a lot of conversation around everything from appropriations, to infrastructure, to voting rights, to the filibuster,” Bowman said. “And in those conversations, there has been movement from Manchin and Sinema and others. So, I see it as a possibility. Yes.

“But again, it’s going to take both inside and outside organizing and pressure.”