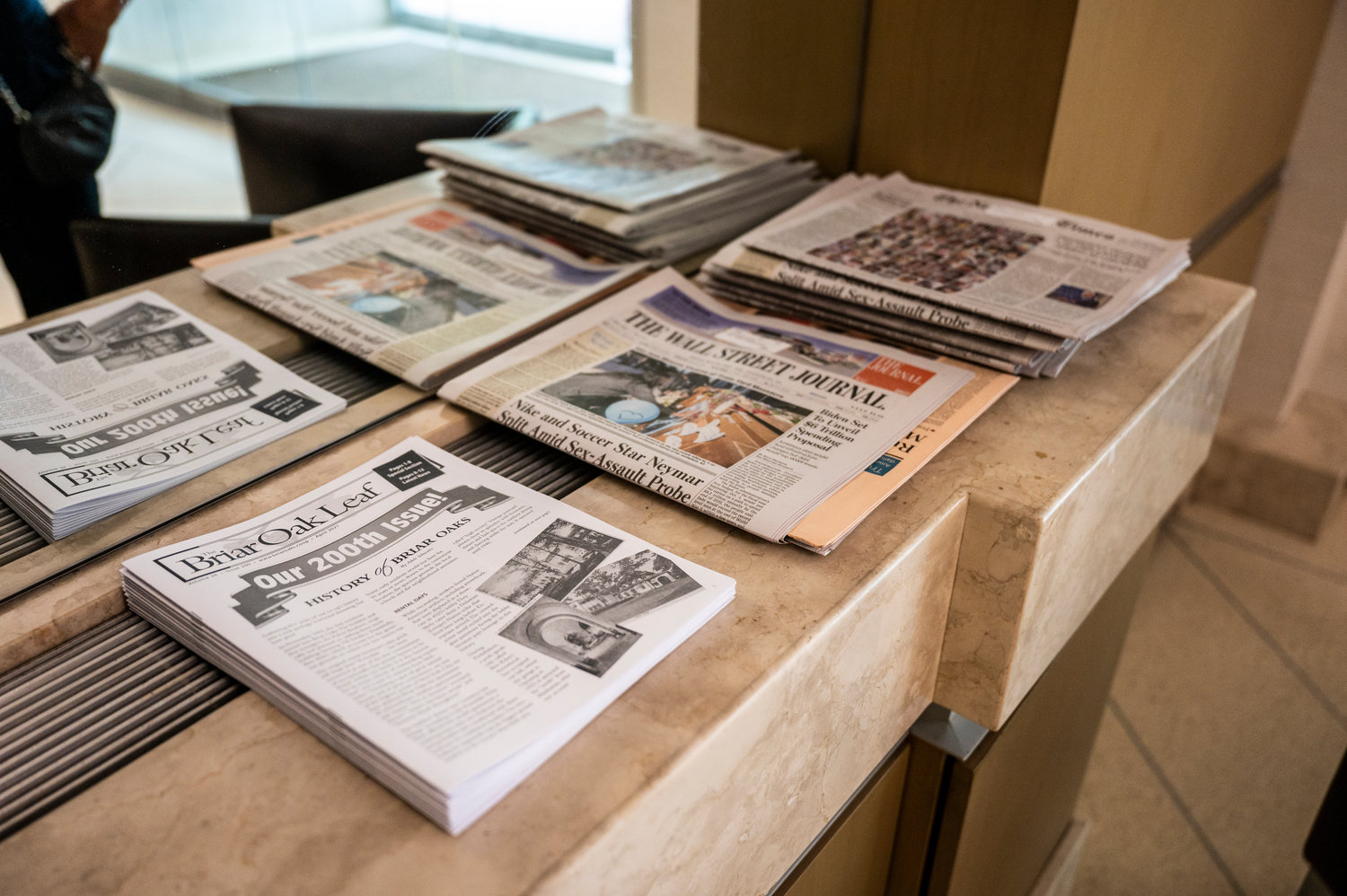 The Briar Oak Leaf, the newsletter for the Briar Oaks community on Henry Hudson Parkway West, celebrated its 200th issue by diving deep into the history of the building itself, which first opened in 1953.
HIRAM ALEJANDRO DURÃN 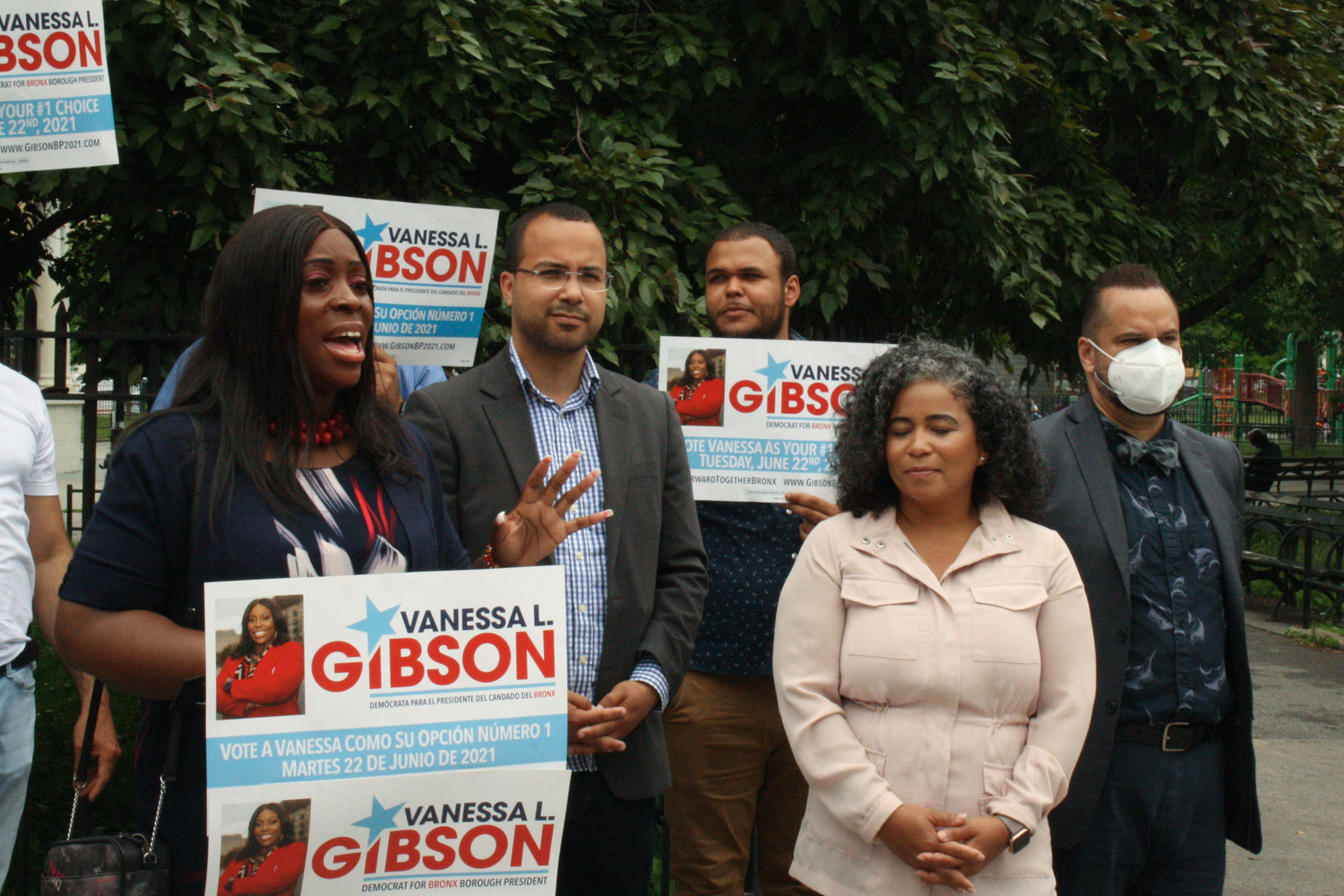 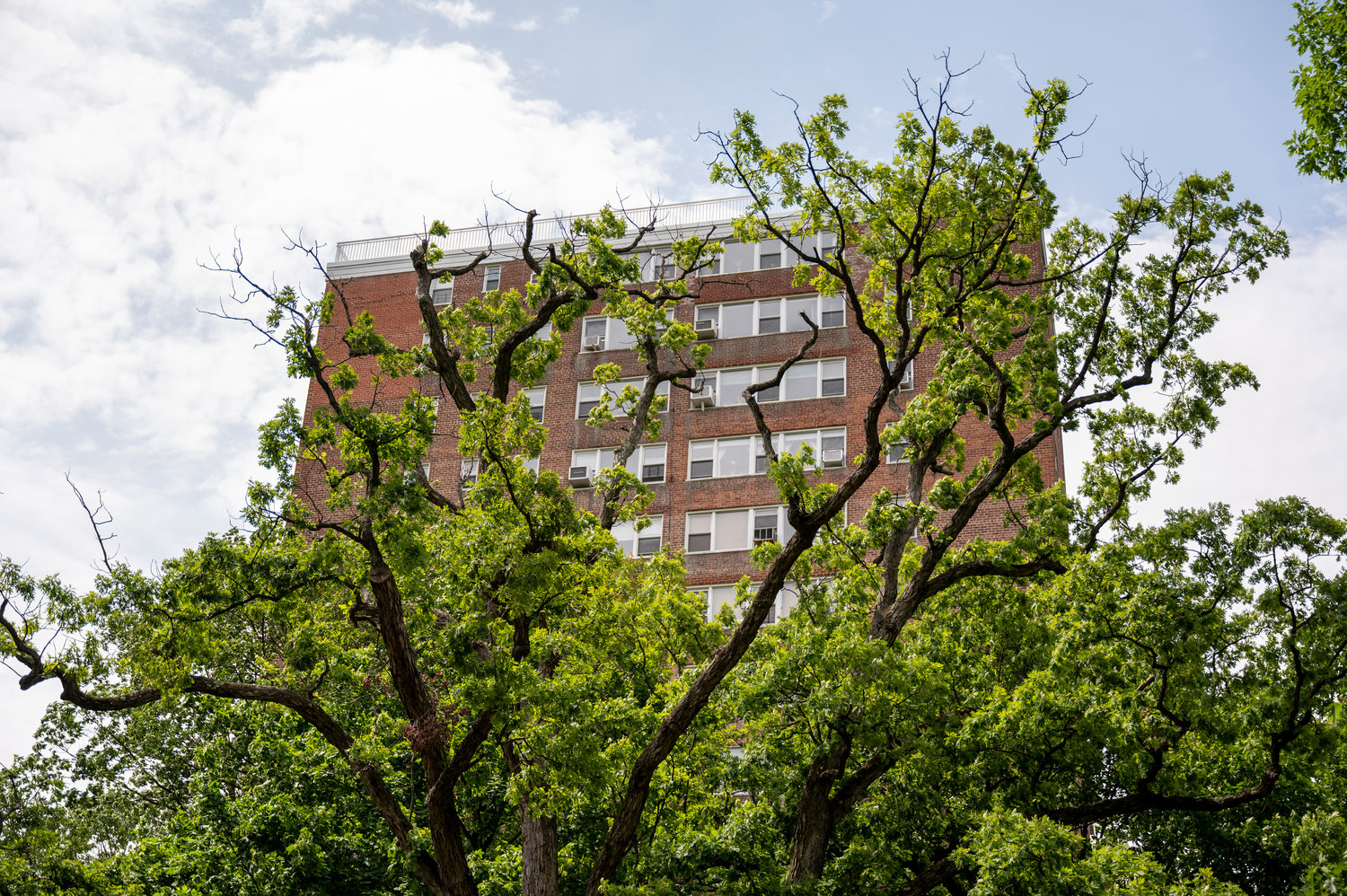 It’s no longer winter at Briar Oaks. As the weather heats up, the apartment complex grows evermore adorned with greenery.
HIRAM ALEJANDRO DURÃN 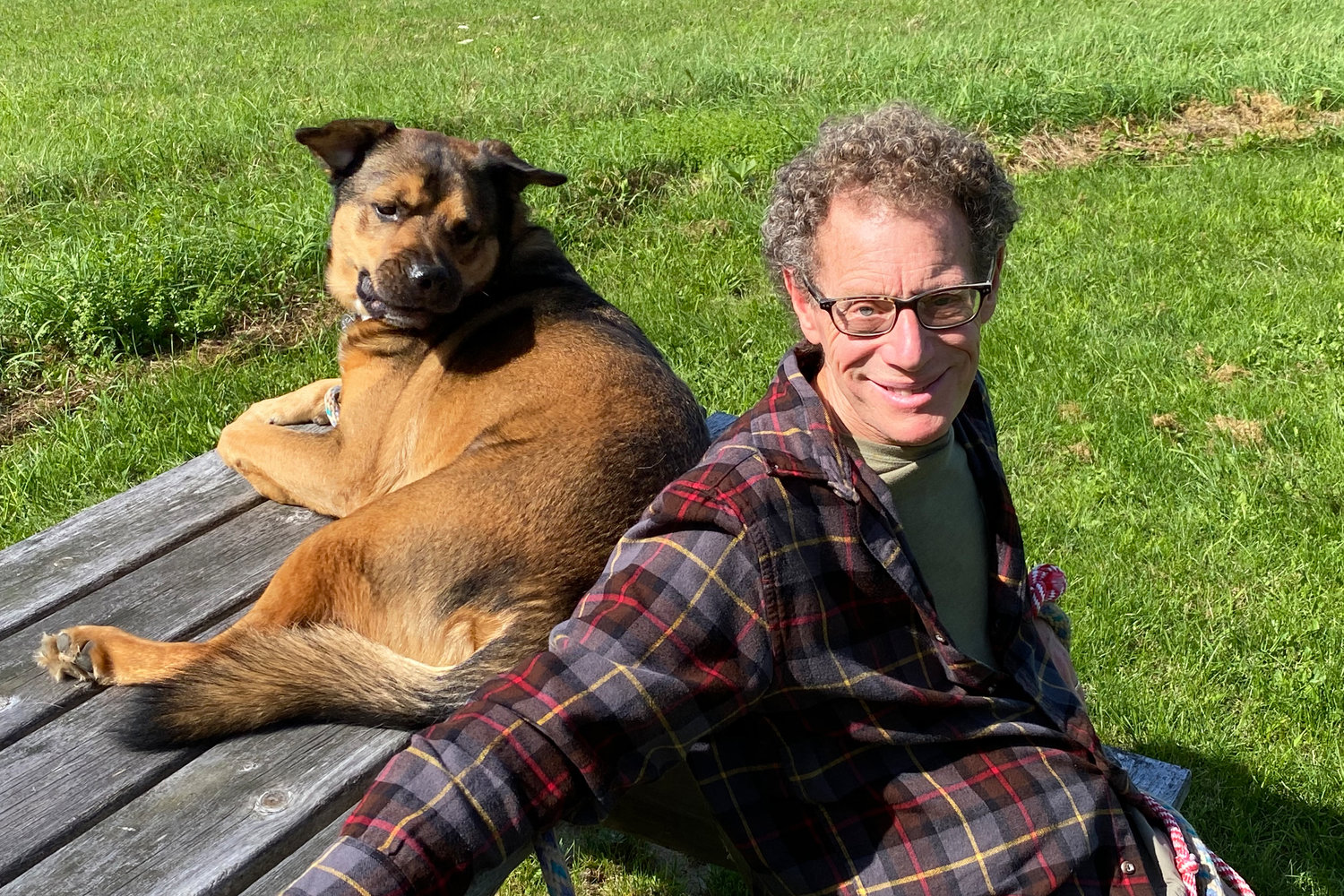 Neill Rosenfeld is a former journalist and a longtime resident at the Briar Oaks complex on Henry Hudson Parkway West. After moving in with his wife, Rosenfeld saw an opportunity to keep his fellow residents informed and connected through what would become the Briar Oak Leaf.
Courtesy of Neill Rosenfeld 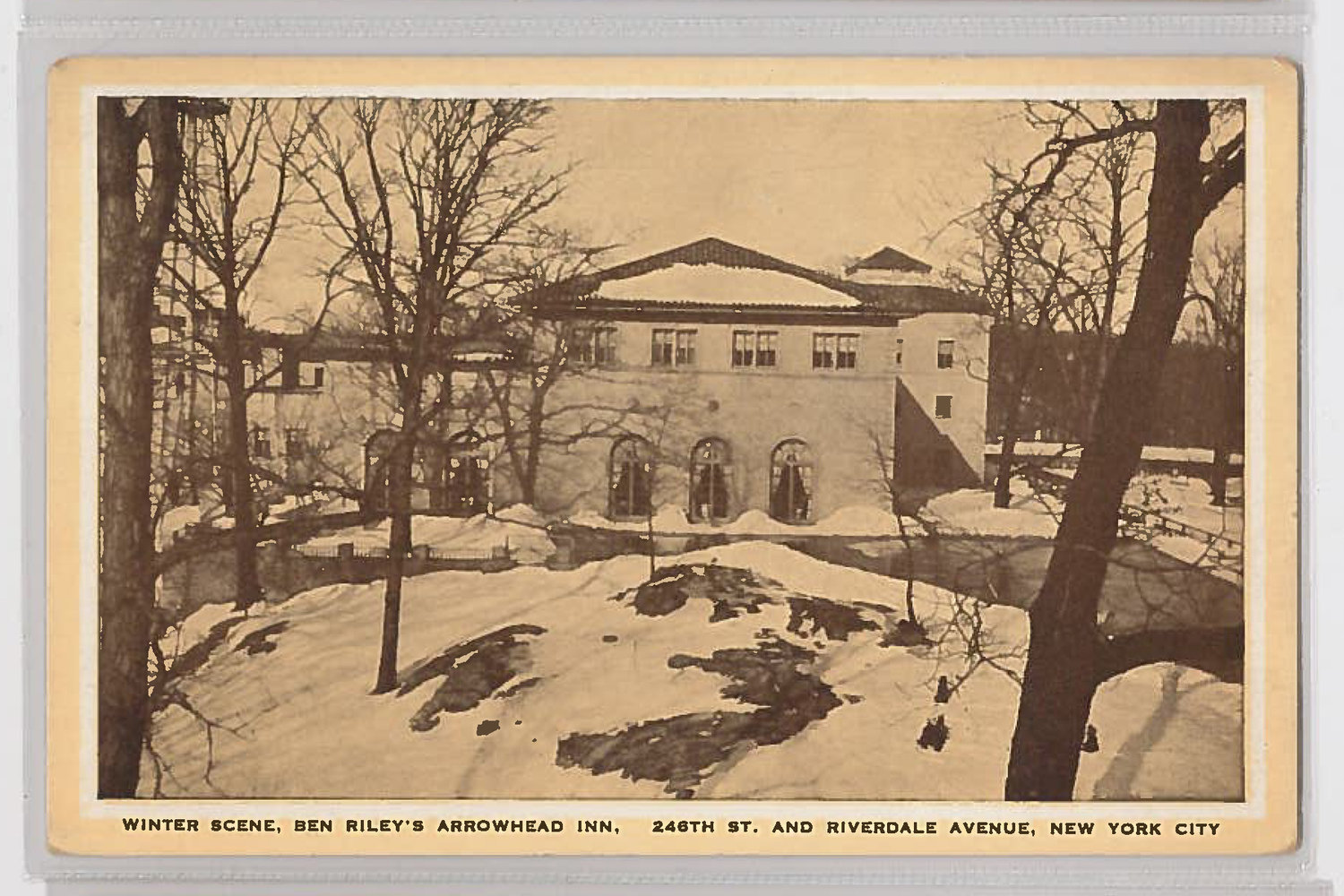 Before there was Briar Oaks, there was the Arrowhead Inn, a popular speakeasy that would draw its own kind of crowds to this part of the Bronx back during the days of Prohibition.
Courtesy of Neill Rosenfeld
Previous Next
By SOPHIA ROMANO

When the Fisher brothers opened Briar Oaks on the Henry Hudson Parkway in 1953, they probably didn’t expect their complex to thrive well into the 21st century.

But 68 years later, the grounds have accumulated a unique personality through rich history and diverse residents.

Before either of the residential buildings were constructed, the grounds were home to a popular speakeasy called Arrowhead Inn. Restaurateur Ben Reily’s 1923 nightlife hotspot sat on the hill now occupied by the Briar Oaks garage.

Dorothy Delaney moved into Briar Oaks with her parents when it first opened in 1953. She shared some of those experiences with the complex’s community newsletter, The Briar Oak Leaf, which celebrated its 200th issue last April. There Delaney notes the significance of the arrowhead motifs found on panels in the building’s lobbies, which she says are remnants from the Arrowhead Inn’s interior.

Piercing the historical core of the grounds, these arrowhead motif panels not only incorporate direct pieces of history into the everyday living of Briar Oaks, but also pay tribute to the grounds the residents there live on. Arrowheads were unearthed during the initial excavation of the Briar Oaks property, and are believed to have belonged to the Lenape nation tribe.

Therefore, the “Arrowhead Inn” as a choice of name hits a bullseye.

At some point, like many developers, the Fisher brothers sold Briar Oaks, and the new owners weren’t as fond of the excavated artifacts as the Fishers were.. To this day, no one knows where those artifacts are, according to the newsletter’s anniversary issue.

On top of that, the building started going into a state of disrepair — elevator maintenance was lacking. Rent soared. Objectors were prompted to relocate.

But the frustrated residents didn’t just step aside as the new owner thought they would. Instead, they staged a successful rent strike, forming what would become the Briar Oaks Tenants Association, all spearheaded by resident Marion Silberman.

Silberman and her fellow tenants stood up for their home yet again in 1982 against plans to convert Briar Oaks into a co-op. Their landlord at the time had reportedly intended to evict any resident not willing to buy a pricey share. The no-buy pledge sparked by the tenants association apparently made the landlord think twice about his eviction plan.

Maintenance and rent weren’t the only issues that have plagued the community from time to time. The early days — like many residential complexes at the time — faced racial issues. At the same time, 1957 brought a new couple to the complex — the Varons. They immediately questioned why they had no African-American neighbors.

When the building’s management explained they feared existing white tenants might object, this resident group led by the Varons disagreed.

They circulated a petition, got a lot of positive response, but in the end didn’t make much of a difference. Clementine Pugh and husband G. Douglas were denied an apartment at Briar Oaks in the early 1960s because of the color of their skin.

The Pughs weren’t so easily dismissed, however. They collaborated with a white family to pursue the same apartment the Pughs were told wasn’t available.

Unsurprisingly, the white family was offered the home. G. Douglas reached out to the city’s Committee Against Discrimination in Housing, and planned a protest with neighbors, friends, and family.

It wasn’t even necessary — the threat of the protest alone was enough to force the landlord to finally start renting out apartments to African-American families. That included the Pughs.

In 1996, a former journalist named Neill Rosenfeld noticed there wasn’t anything he or his neighbors could read that would give real news about Briar Oaks. Not long after, there was something sharing the news — and something he would spend years contributing stories to: Briar Oak Leaf.

“It’s important to them to know where their money is going,” Rosenfeld said. “If there’s a leak in the roof, is it going to be repaired? And what’s it going to cost? And how’s it going to work? It just seemed like necessary health maintenance for the community.”

It doesn’t hurt that Briar Oak Leaf keeps residents updated on important issues within the complex.

The front page even features a “from the board” section where tenants are told about important changes in the buildings that could affect their enjoyment of their home.

Rosenfeld likes talking about the Pughs, and how they stood up against racism to become a major part of Briar Oaks history. In the end, they helped turn its mix of tenants into what they are today.

Heck, for a time it was even the home of singer Tony Bennett.

There isn’t the same kind of drama at Briar Oaks today as there once was. And for Rosenfeld, he’s perfectly fine with that.

“It’s racially mixed, it’s ethnically mixed,” Rosenfeld said. “It’s religiously mixed. And it has been a place without problems for the last 25 years that we’ve been operating.”