As nation scrambles to restore key supplies, neighbors begin to feel the impact closer to home 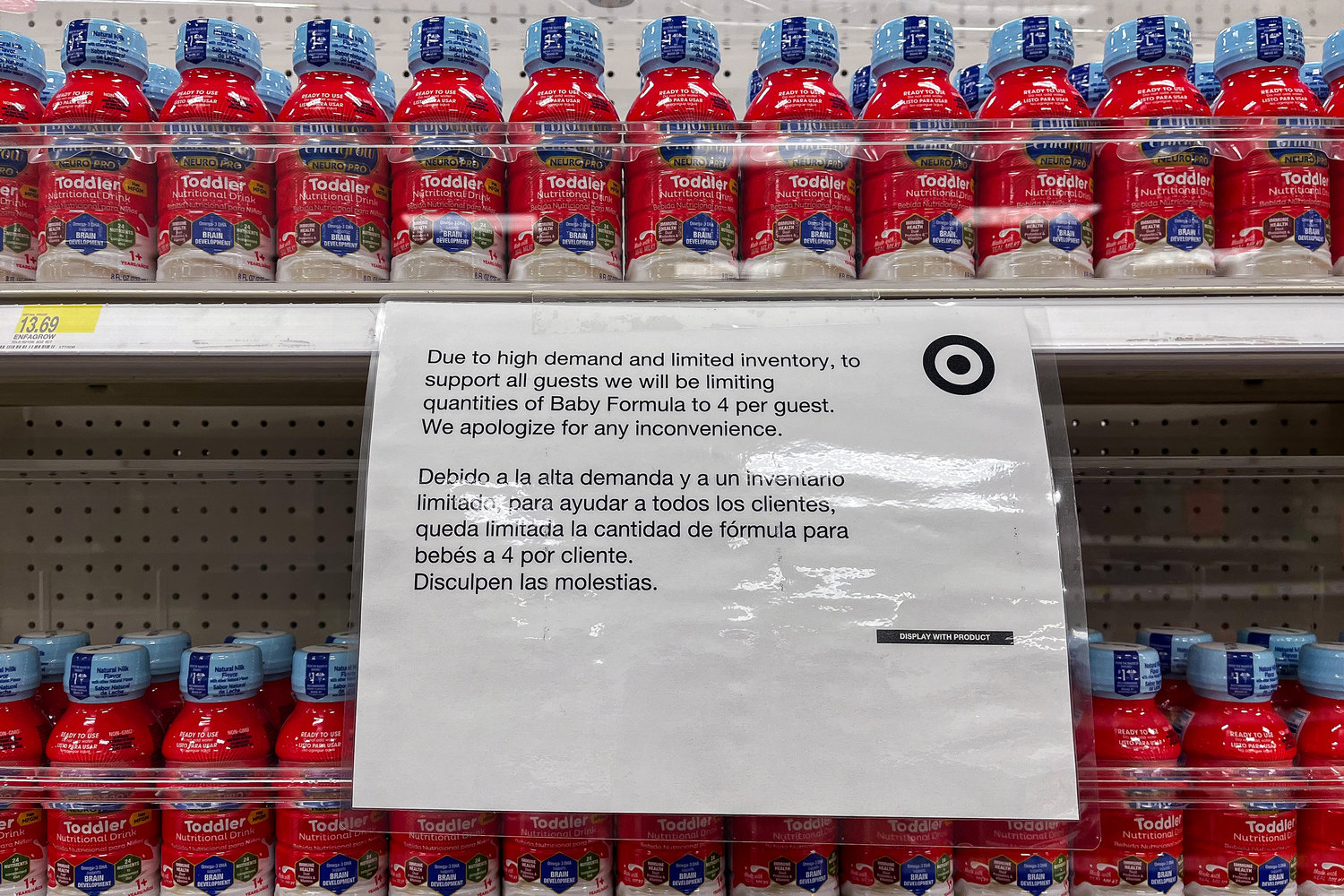 Formula behind locked shelves at the Target in Marble Hill on Wednesday, May 18, 2022. Signs in the aisle note that customers are not allowed to purchase more than four formula products per purchase in light of nationwide shortages.
Hiram Alejandro Durán 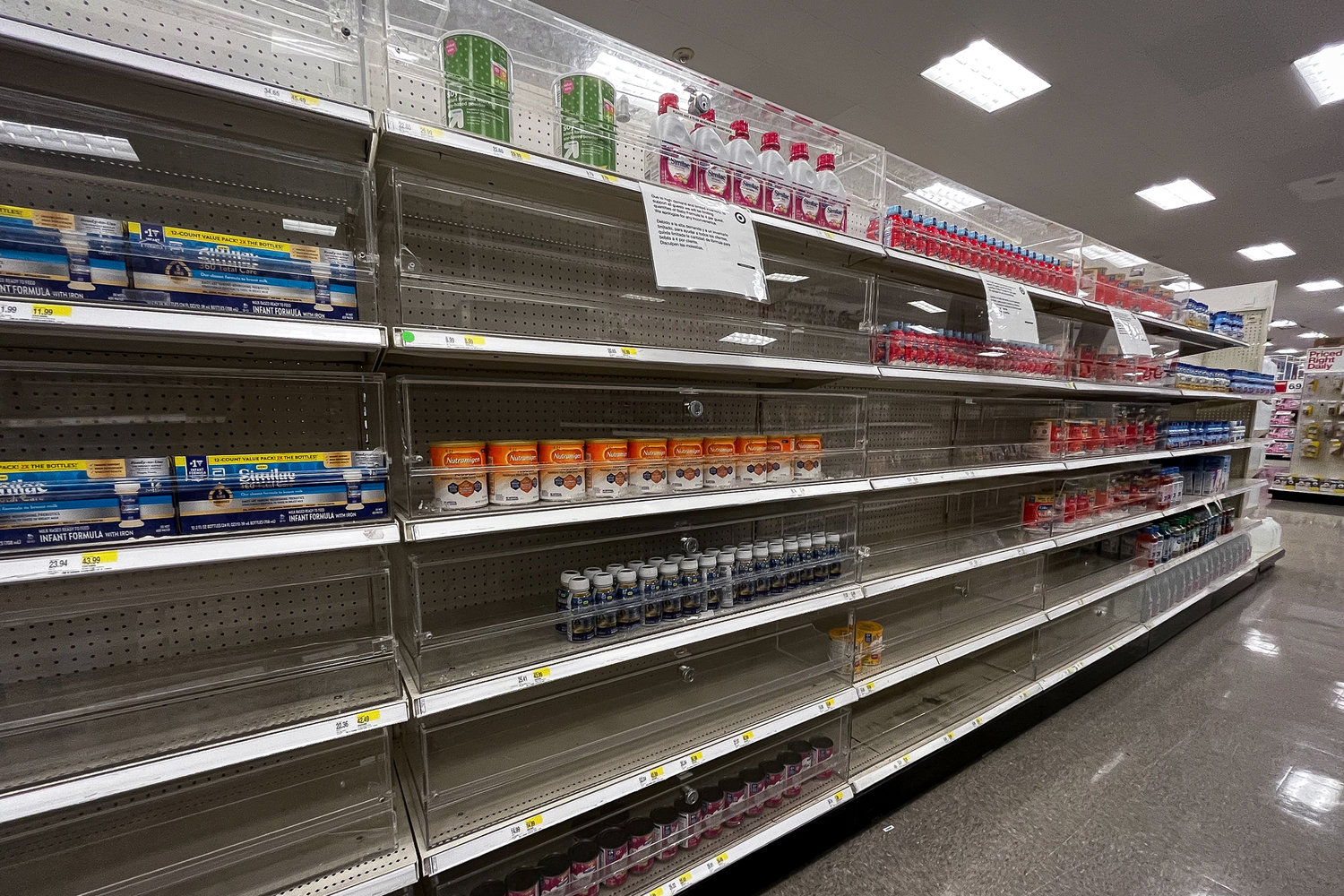 Formula behind locked shelves at the Target in Marble Hill, which are half empty, on Wednesday, May 18, 2022. Signs in the aisle note that customers are not allowed to purchase more than four formula products per purchase in light of nationwide shortages.
Hiram Alejandro Durán
Previous Next
By JOSEPH DE LA CRUZ

There’s already massive inflation, Russia’s invasion of Ukraine, and the skyrocketing costs at the gas pump. But there’s a new dilemma facing American families, and it’s one that could have dire consequences.

Baby formula is in extremely short supply. But it’s not just a report on the news happening in some faraway place. One needs not look any further than the neighborhood Target store in Marble Hill to see just how bad this pandemic-fueled shortage is.

The West 225th Street store has been rationing formula, keeping it locked in a plastic-like encasement requiring an employee with a key to access it.

The purpose? To limit the number of baby formula purchases to four units per customer.

But the quantity may not be enough for families who rely on big-box retailers like Target to keep them supplied. Like the families just blocks away at Broadway Family Plaza, a transitional housing facility at 5731 Broadway, where a number of infants are regularly taking up residence.

It’s managed by Praxis Housing Initiatives, one of the city’s largest social service providers of transitional housing to families that were, up until recently, homeless.

Ruth Rogers — the facility’s office manager — is on the frontlines. Her organization struggles to help keep many of her families properly supplied, especially with access to the vital infant food extremely limited.

“We help a lot of new moms (and families) that come in,” Rogers said. “When they come into the shelter for the first time for intake,” this is where they come.

Broadway Family Plaza does more than just provide shelter. It also helps out with a number of other services like with meals and anything else that isn’t covered by their own work paychecks, or through government assistance.

“We’ve been giving them a lot of food,” Rogers said. “We know a lot of them have babies. We have Pampers and stuff like that here. We have a few items of baby food. And we had some formula.”

But for some, the issue is much more dire because they don’t qualify for government assistance.

“We’ve been getting a lot of undocumented families, so it’s even harder,” Rogers said. “Since the shortage, we’ve noticed a lot of the moms are having difficulties, and they’re not able to get food stamps. We’ve been giving them a lot more formula.”

It’s added pressure for the organization that, simply put, doesn’t have enough supplies to go around.

“Those that do get food stamps, and the moms that have babies, are having issues with trying to get milk from the supermarkets,” Rogers said. “Within the last five months, we’ve had a lot of moms that have come through here. They’re pregnant. They’ve had their babies here. So, we have a quite a few newborns.”

While many of these supply chain issues feel new, it’s actually not the first time the Broadway shelter has had trouble getting supplies for families. But the workers and volunteers there have been lucky to get help from neighbors — including one currently running for office.

“A couple of times when we needed extra formula for moms — back when we had the influx of moms who had come through and were undocumented — we had some help from Jessica Woolford,” Rogers said. “But at the time when she helped us, she was just a regular community neighbor. We were getting help from her. She would get some gift cards. She came and went to BJs and bought a couple of cans of formula. She gave it to us.”

Woolford is now running against Jeffrey Dinowitz, seeking the Assembly seat he’s held since the mid-1990s.

But Woolford is far from the only neighbor helping. Just last week, received a small donation of four cans from someone from a Riverdale-area synagogue.

“We usually just put the word out to the community and see if anybody you know comes across anything if they’re able to purchase,” Rogers said. “That’s how we’ve been getting a little bit of formula here and there.”

But Rogers is now left holding on to four cans under her desk she suspects will only last until Thursday. The organization doesn’t know what to do or where to go to obtain baby formula.

Other neighbors, like Laura Levine-Pineda — owner of the Bronx Burger House in North Riverdale — are hearing the calls for help and are getting involved.

“Anyone who is looking to donate to the shelter is more than welcome to drop off baby formula here,” Levine-Pineda said. “We’d be more than happy to help get them whatever they need.”

The baby formula shortage comes after the feds shut down a Michigan plant operated by Abbott Laboratories over safety concerns. Yet, even after the Food and Drug Administration reached a deal with Abbott to reopen the plant, the Washington agency warns it could take weeks before formula reaches store shelves again.

Biden also announced “Operation Fly Formula,” designed to speed the import of infant formula from Switzerland that could import more than 1.5 million bottles.

Still, the efforts could take weeks before these young families can normalize again. It’s time many affected newborns and infants might not have.

“This is the first time we’ve experienced something like this and I’m worried,” Rogers said. “I’m thinking, ‘How do you get a shortage of formula?’”

But even more importantly, what do you do if your family does run out. That could come in the form of alternatives — like other brands of formula — or even pooling breastmilk, like through the New York Milk Bank.

For more information on that particular service, visit NYMilkBank.org.