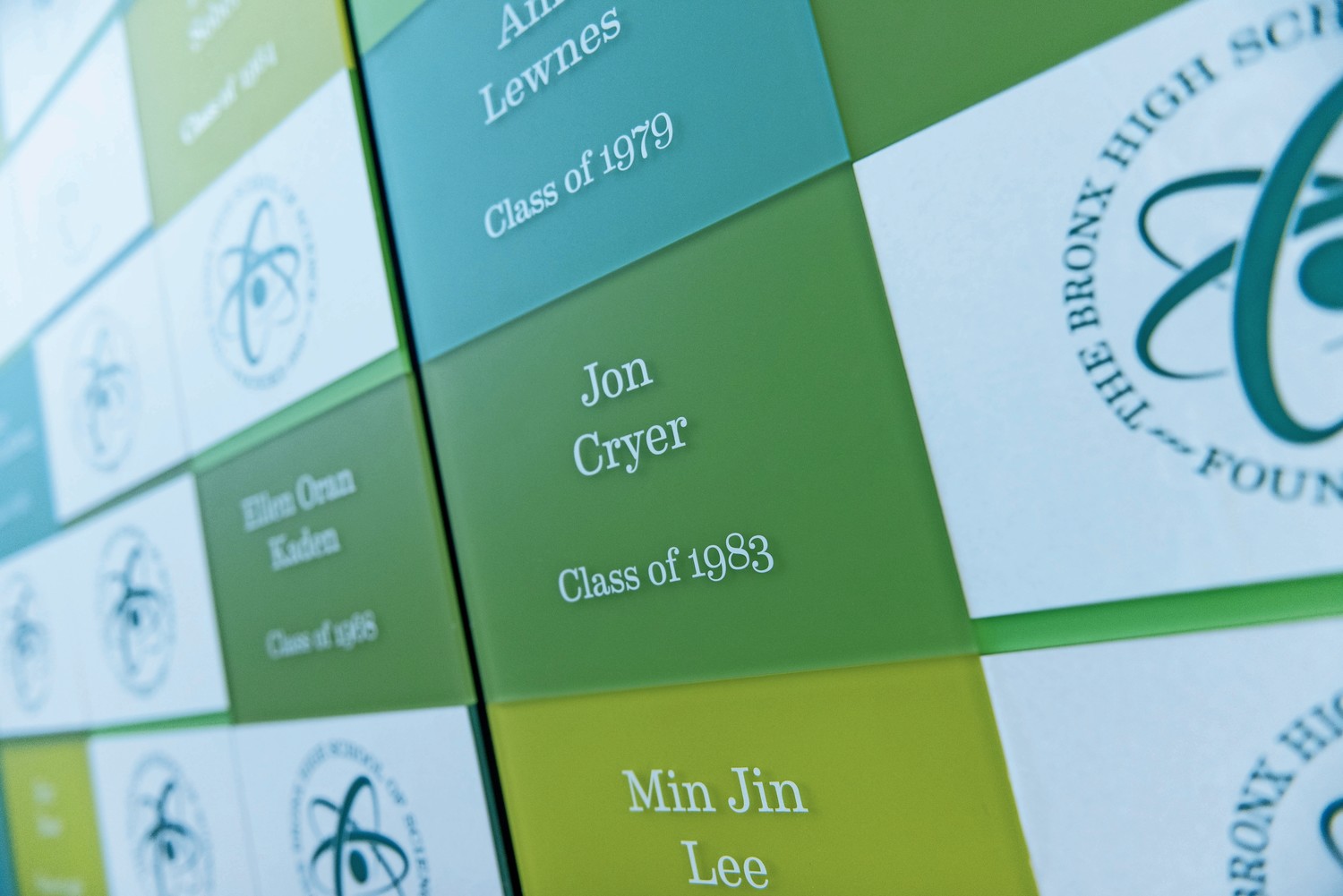 One of Bronx Science's notable alumni is the actor Jon Cryer, who is known for his role as Alan Harper in the sitcom 'Two and a Half Men.'
JULIUS CONSTANTINE MOTAL 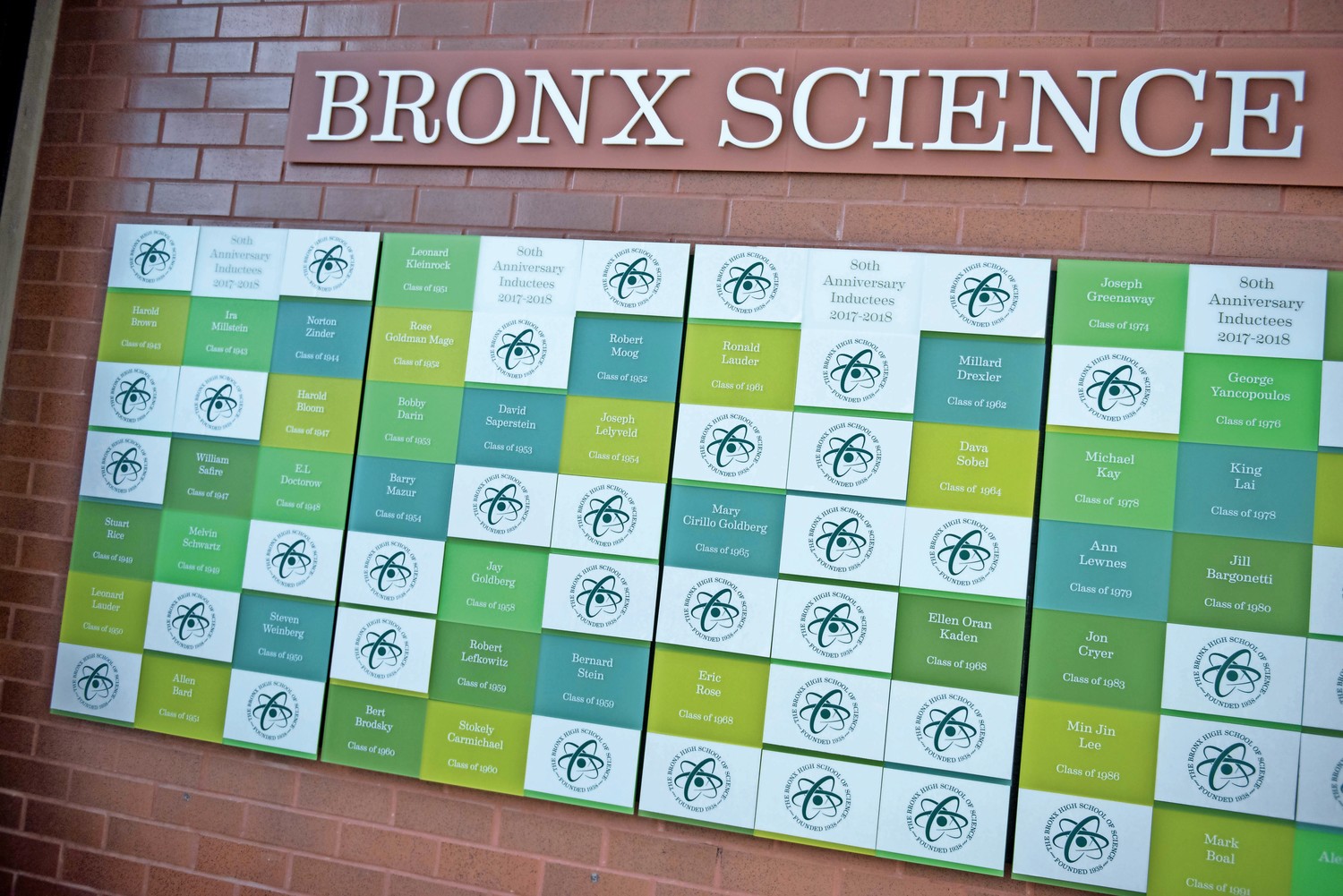 The hall of fame at Bronx Science displays the names and graduation years of notable alumni. Each alum has to come by the school to unveil his or her name.
JULIUS CONSTANTINE MOTAL 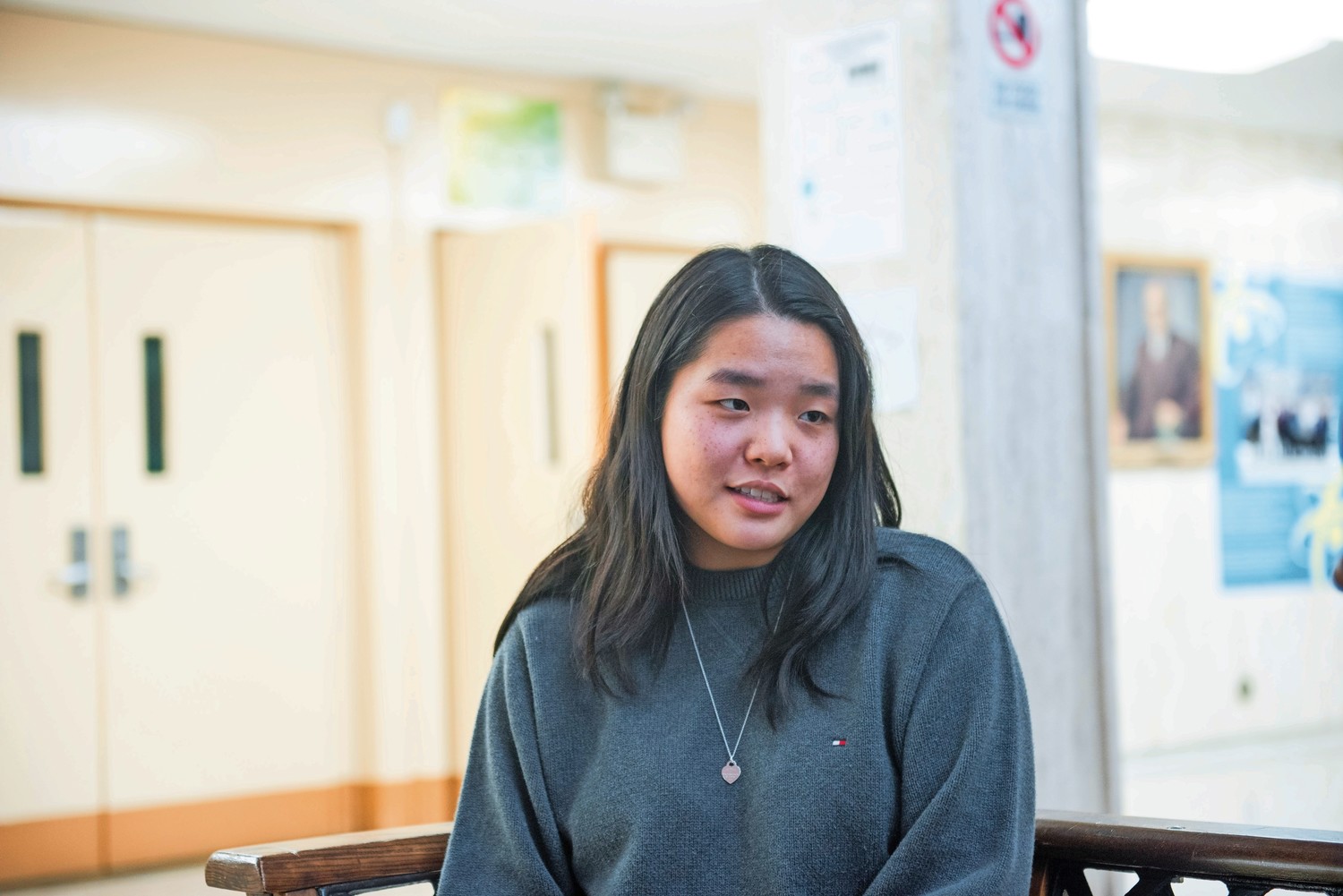 Stephanie Tu, a senior at Bronx Science, talks about being a student ambassador and working with alumni at the school. Bronx Science recently unveiled a hall of fame to celebrate notable alumni.
JULIUS CONSTANTINE MOTAL 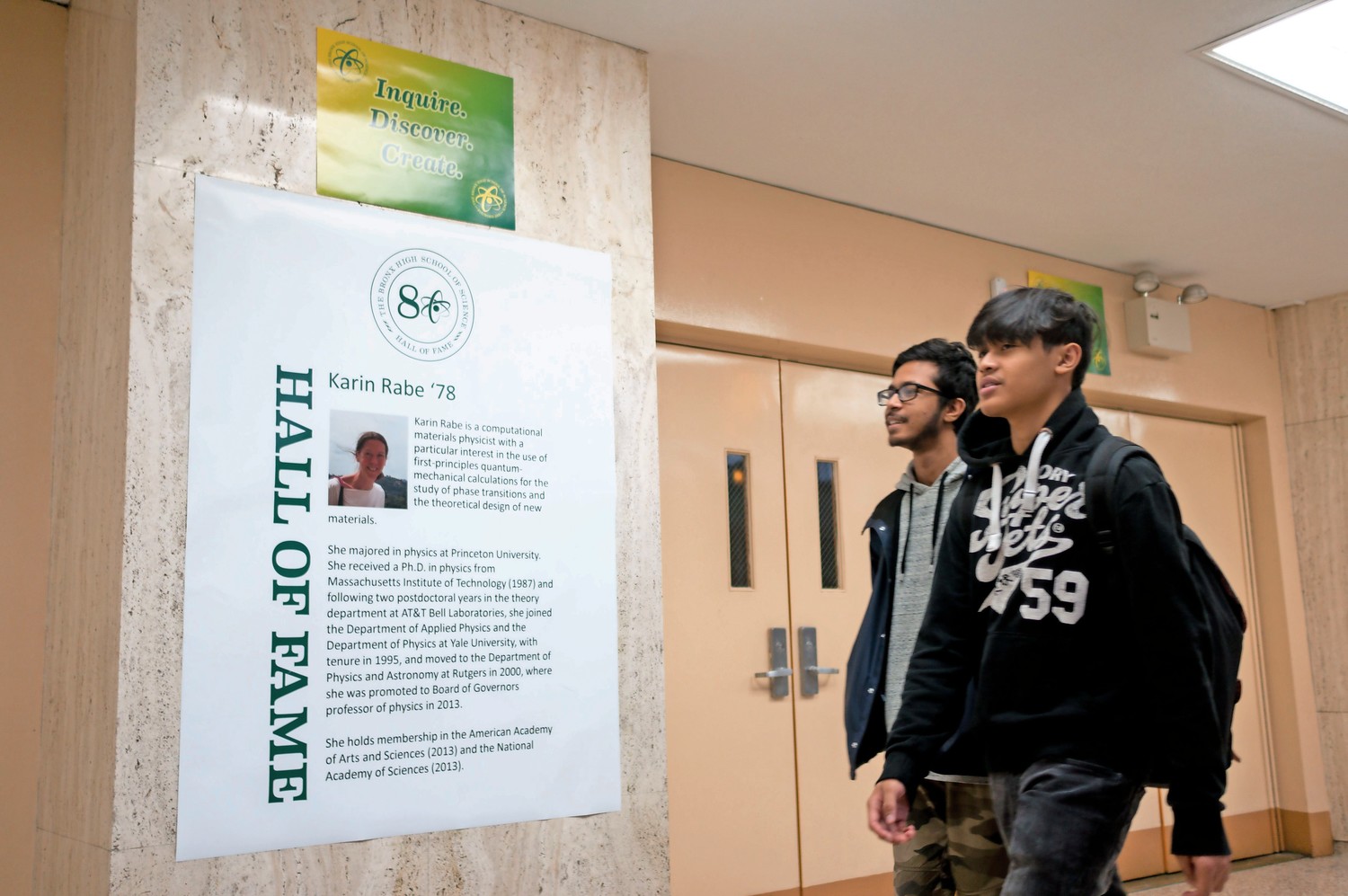 People may now know him as Duckie from “Pretty in Pink” or as Alan Harper in “Two and a Half Men.” But before all that, Jonathan Cryer delved into his acting career as a student at Bronx High School of Science, graduating in 1983.

However, it was John Hughes’ film “Pretty in Pink” that put him on the map.

Cryer won two Emmys from seven nominations during his time on “Two and Half Men.”

Karin Rabe is a physicist who studies the property of materials through computer simulations. She uses methods like electronic structure calculations and classical molecular dynamics to study liquids, colloids and atomic crystals.

Rabe graduated from Bronx Science in 1978, moving on to get her undergraduate degree in physics at Princeton University before earning a doctorate at the Massachusetts Institute of Technology.

Soon after, Yale University asked her to join their physics and applied physics department.

In 2000, Rabe moved to Rutgers University, and was later awarded the David Adler Lectureship Award in the field of materials physics.

Neil deGrasse Tyson gave the commencement speech at his old high school in 2014. He graduated in 1976, going on to become a world-renowned astrophysicist.

Tyson also is the director for the Hayden Planetarium at the Rose Center for Earth and Space in New York City. He received his undergraduate degree from Harvard University, his masters at the University of Texas at Austin, and his doctorate from Columbia.

Born in Manhattan, Tyson moved to Riverdale as a child from Castle Hill. He attended a number of public schools, including M.S. 141 before moving on to Bronx Science.

Today, he’s likely one of the most famous scientists in the world, appearing on a number of television shows, and even hosting his own. Tyson took over hosting duties of the Fox series “Cosmos” from his mentor, the late Carl Sagan, in 2014, with a second season set for next year.

Growing up in the Bronx and graduating from Bronx Science in 1959, Robert Lefkowitz is best known for his work in biochemistry.

In 2012, he was awarded the Nobel Prize for chemistry for discovering the functions of a significant protein group called G protein-coupled receptors, which helped pharmaceuticals better target medication for specific ailments.

The Bronx High School of Science has given the world two Academy Award winners, which is impressive enough on its own. But add eight Nobel Prize winners, and it would be hard not realize Bronx Science might be on to something.

The school at 75 W. 205th St., is celebrating its 80th anniversary, and as a way to commemorate that, Bronx Science’s alumni foundation not only is honoring those Oscars and Nobel Prizes, but 80 of its most notable graduates with a new hall of fame.

“If the high school was a country, we’d rank like 14th in the world,” said Robert Lefkowitz, a Nobel Prize winner in chemistry, and a Bronx Science alum, about the total number of Nobels past graduates like him have received. “Bronx Science has a very enriched curriculum, and they have this critical mass of really smart kids interacting with one another. All these strivers and achievers, and that is what you get.”

Foundation vice president Eleanor Coufos created the hall of fame with her team because she wanted to recognize the value of those that have walked the halls of the school over the years, while inspiring more of the same in the future.

“We always try to find ways to celebrate our alumni, and we wanted to do something different for their 80th anniversary,” said Coufos, who focused on professional achievements and outstanding contributions to their field when selecting the inaugural hall of fame class.

When alumni are inducted into the hall, they are invited to visit the school and are escorted by student ambassadors. Stephanie Tu, a senior from Queens, filled that role for Bernard Stein, a past publisher and editor of The Riverdale Press who won the Pulitzer Prize in 1998 for editorial writing.

Ambassadors are given the opportunity to pick the alumni they’d like to accompany for the day. Tu chose Stein because even though she aspires to be a dentist, the 17-year-old also is interested in humanities with a love for journalism.

“He was really nice and charming, and he’s really easy to talk to,” Tu said. “I did a lot of research beforehand and I found it interesting. He was really wise and has gone through a lot. I think he’s really well-spoken and good with his words.

“The way he talks about his experiences, it really makes you want to go.”
Like Stein, Lefkowitz also had a chance to interact with eager students.

“I had an absolutely marvelous day there,” Lefkowitz said. “We had an assembly in the auditorium and (the students) were having a hell of a time. They all aspire to higher achievement.”

Part of what makes Bronx Science so special, Tu said, is that all interests are represented. The school encourages students to research, and in the same breath, pushes them toward theatre and arts as well.

Visiting alumni range from movie directors to biologists, Tu said. And she’s not afraid to imagine herself needing a student ambassador to spend a day with her one day when Bronx Science adds her to its hall of fame. That’s something every student can aspire to achieve.

With so many names joining the hall of fame — not just Lefkowitz and Stein, but also people like Neil deGrasse Tyson, Jon Cryer and Karin Rabe — the revolving door of visiting alum simply does not stop. Some weeks, Courfos said, can have as many as five visits from former students.

“Bronx Science is unique because we take unique and talented students from all over New York City and principal (Jean) Donahue helps bring out the best out of her students,” Coufos said.

“It’s not uncommon to find that alumni still speak to other alumni. They show students that the sky’s the limit, and that everyone can succeed.”