Bronx seems to like the mayor’s ‘yes’ rally cry

Eric Adams’ vision is picking up supporters in Throggs Neck — here next? 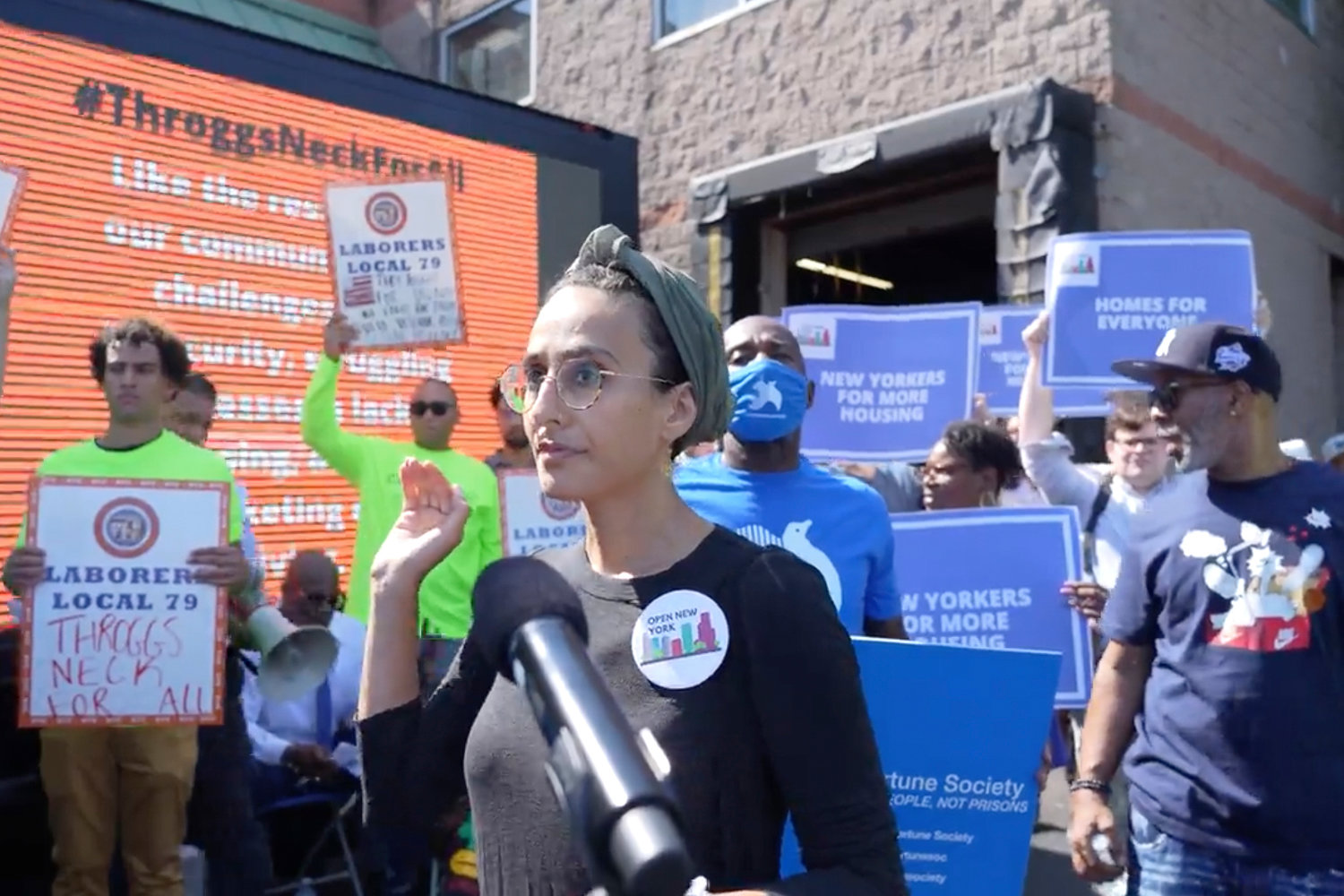 "We desperately need affordable housing in the Bronx," a woman told a crowd of supporters gathered at the Bruckner Boulevard rezoning site Aug. 30. "People like me who grew up here cannot afford to continue living here." The development spurred rancorous protests and counter-protests this summer leading up to the city planning commission’s vote to approve the upzoning.
Courtesy of New York Housing Conference
Support journalism

It has been the summer of protests and counter-protests in Throggs Neck.  Supporters of the proposed Bruckner Boulevard upzoning rallied Aug. 30 to say “yes” to four new buildings in their neighborhood. The redevelopment will add 349 apartments if it survives a city council vote early this fall. It passed unanimously in a planning commission vote Aug. 24.

Amid their cheers was a message for Mayor Eric Adams, whose “City of Yes” zoning plan has gained a growing chorus of support on both sides of the Bronx River Parkway. Adams was scheduled to attend the rally, but was not able to show up.

“We’re proud to join everybody here to say yes to housing, yes to equity, and yes to a more affordable and thriving New York,” the New York director of the Regional Plan Association, Maulin Mehta, said to the jubilant crowd Tuesday. His speech was met with cheers from residents and housing advocates as well as members of Laborers Local-79 and SEIU 32BJ who attended to support the Bruckner upzoning.

Earlier in the summer, videos of rallies opposing the development went viral online.

“This happens across the city,” Mehta said. “A small minority of the community has been loudly opposed to any affordable housing in this neighborhood. But you don’t hear from the veterans, the senior citizens that have to work extra jobs because they can’t afford to live in this city. You don’t hear how they will benefit from these new units.”

Adams coined the slogan in June when he outlined his vision for three citywide zoning text amendments he plans to propose in the coming years. “We are going to turn New York into a ‘City of Yes,’” the mayor said. “Yes, in my backyard. Yes, on my block. Yes, in my neighborhood.”

Yet a majority of residents in the same five council districts are rent burdened and the average vacancy rate is 3.2 percent — both signs of significant need for housing.

The New York Housing Conference joined a coalition of 90 community groups, faith leaders, and housing analysts that signed a letter last Tuesday supporting the mayor’s citywide approach to create more affordable housing. Adams has proposed increasing the floor area ratio for all types of affordable housing, easing parking requirements, and opening up the city’s loft law to make it easier to convert hotels and other commercial buildings into apartments.

Citywide zoning amendments can “lead to more equitable development throughout the five boroughs, and we are excited to collaborate with the administration to develop these,” the letter said.

“But just as key is to make sure that good proposals, especially those in areas with a dearth of affordable housing currently, are not defeated by a few neighborhood residents who would rather not see anything, no matter how needed, get built.”

“What we wanted to do with that letter was show the widespread support for this idea of a ‘city of yes,’ and reinforce that idea to the mayor, the borough presidents, and city council leaders,” said NYHC policy and communications director Brendan Cheney. “The things (the Adams administration) has said so far we like, like allowing for a floor area bonus for affordable housing. That’s good policy. Reducing the parking requirements would also be helpful for the city to build affordable housing. We want to encourage continuing support for it.”

Cheney said programs and policy is one arm of NYHC’s work in New York City. Equally important, he said, is public messaging.

“In some districts the councilmembers are on board,” Cheney said. “They understand the importance of affordable housing. Our report wasn’t an indictment on any of the members. Afterall, a lot of them are new. Having said that, (Rafael) Salamanca, (Charles) Barron, (Diana) Ayala – the members at the top – all want to see more affordable housing in their districts. In some places, there’s recognition that low zoning is a challenge, but then there’s this resistance, like we’ve seen in Throggs Neck.”