If you build it, Manhattan College will come (back) ... maybe 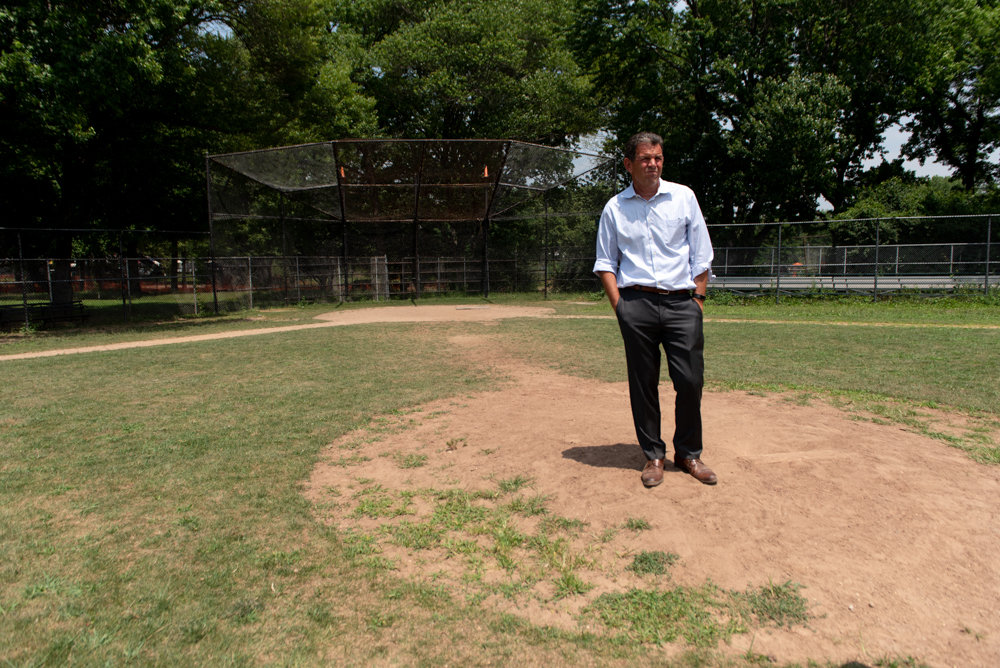 Rob Walsh, senior advisor to Manhattan College’s president, takes in the view of the ballfield in Van Cortlandt Park. Walsh wants the city to renovate the field, restoring it to its former glory.
FRIDA STERENBERG 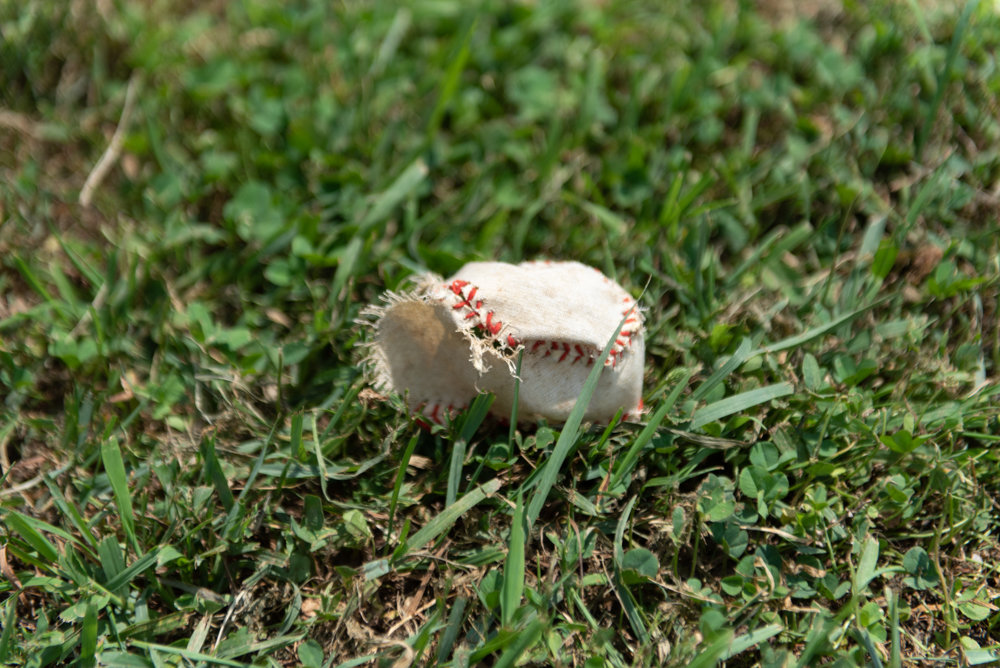 A torn baseball lies on the ground at the Van Cortlandt Park ballfield, which once was the home for Manhattan College’s team. The Jaspers now play home games more than 60 miles away in Dutchess County.
FRIDA STERENBERG 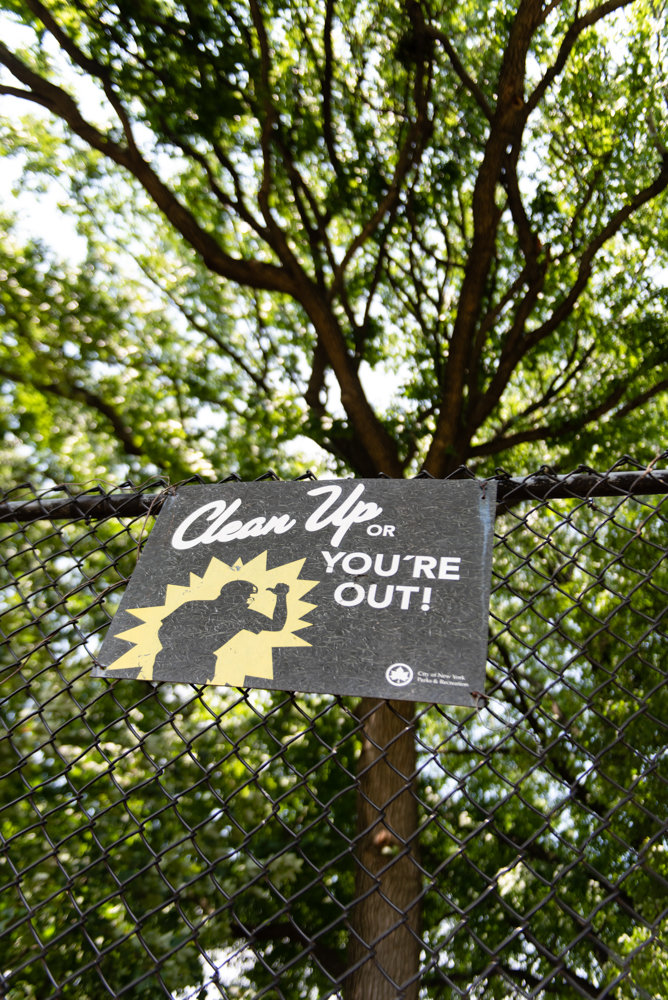 A sign on the fence of one of the baseball fields in Van Cortlandt Park reminds players to keep it clean. Rob Walsh, senior advisor to Manhattan College’s president, wants the city to do its part to restore the field to meet NCAA's minimum requirements. That way the Jaspers baseball team can stop traveling 60 miles away to play ‘home’ games.
FRIDA STERENBERG 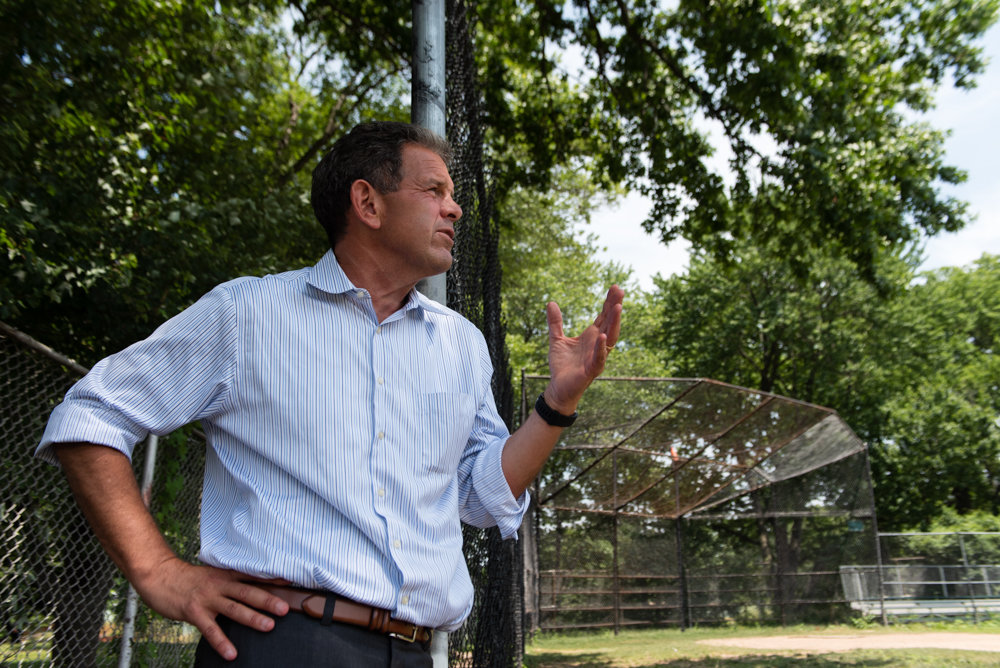 Rob Walsh, senior advisor to Manhattan College’s president, wants the city to invest in returning the ballfield at Van Cortlandt Park to its former glory. The field is beset by problems and doesn’t meet NCAA's minimum requirements for games. The college’s plan would not restrict the public from also using the field.
FRIDA STERENBERG 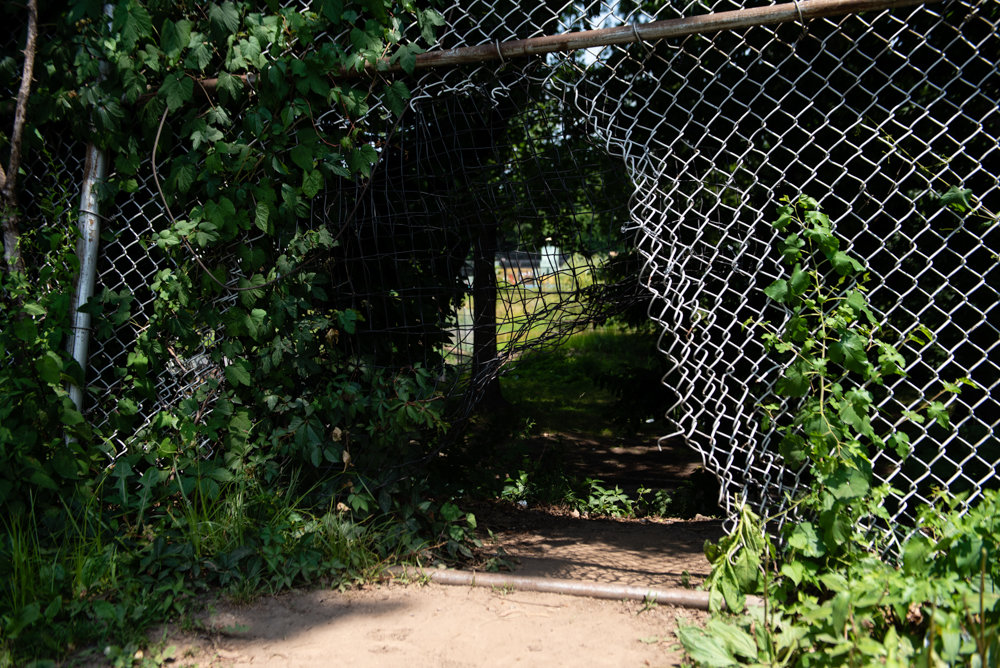 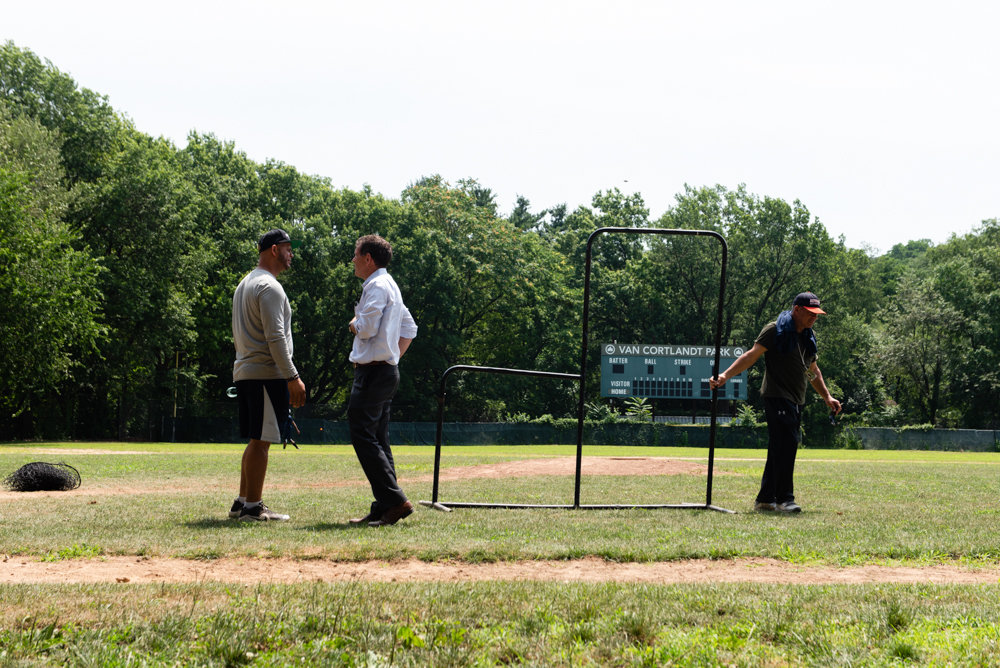 Rob Walsh, senior advisor to the Manhattan College president, second from left, walks through the ballfield at Van Cortland Park, which once was the home to the Jaspers baseball team.
FRIDA STERENBERG
Previous Next
By HEATHER J. SMITH

To Rob Walsh, there’s something magical about the baseball field in Van Cortlandt Park. Standing on the pitcher’s mound, he looks around at the meager stands and the holey backstop, the grass encroaching on the infield and the graffiti-scarred scoreboard.

“It wouldn’t take much to get back to playing here,” Walsh says. “A little bit of work and this would be in good shape.”

It looks worse for wear now, but this ballfield was once a warm, welcoming home to the Manhattan College Jaspers. Some of the team’s best games took place in the park, boasting a 167-52 home turf record. And the college was proud to have the city’s only Division I team playing in a public park.

But five years ago, the team gave up trying to keep the field raked and the grass watered. So many things needed fixing that the field no longer met standards for NCAA play.

“The field was just not in the condition for collegiate level,” said Walsh, a senior advisor to Manhattan College president Brennan O’Donnell. “Sometimes it wasn’t cleaned up after a weekend and we’d have a Monday game. Our folks were hustling around doing more maintenance than baseball.”

Now they practice at Van Cortlandt Park, but their home games are played more than an hour away at Dutchess Stadium in Wappingers Falls.

Walsh and athletic director Marianne Reilly have a vision for what the ballfield could be. They have since laid the groundwork to bring the Jaspers back home.

“Every home game is an away game in my eyes,” Reilly said.

Walsh, who joined Manhattan College last year, got on board. He and O’Donnell began strategizing what needed to be done. They met with city parks deputy commissioner Liam Kavanagh and Bronx parks commissioner Iris Rodriguez-Rosa to discuss a capital project that would breathe new life into the ballfield.

The college came up with two plans. The first — and the one the college really wants — is to turn the field into a genuine baseball stadium. Manhattan College submitted plans to the Bronx borough president’s office and the parks department for a $2.8 million build-out with dugouts, a press box, batting cages and stands.

Unfortunately, that project won’t be funded this year, according to the borough president’s office, but Manhattan College officials hope to secure the money in the future.

That has not stopped the team from planning.

The more modest plan is for the college to pool resources and do a bit of fundraising to just get the Jaspers playing their home games on that field by next spring, Reilly said. Grading the infield would take out the bumps and ridges. Securing the field would prevent vandalism. It will still need a new scoreboard and perimeter fences.

Putting in turf would be a big upfront cost, Reilly said, but it would save a lot of the labor a grass field needs. An investment from the college, she added, might be what prompts the city into funding the larger project.

Walsh envisions a stadium as something the whole community can use, not just the Jaspers. During the team’s off-season, he envisions the field as the perfect place for youth leagues, kids baseball clinics, and amateur teams.

Ensuring the field remains part of the public park is an important part of getting at least one elected official on board.

“I would say tentatively that I support it,” Councilman Andrew Cohen said. “But we need to come up with a model to make sure the community continues to have access to the field.”

The college also needs permission to renovate the field. That will take partnerships with the parks department and organizations like the newly formed Van Cortlandt Park Alliance. As of now, there is no partnership between the college and the alliance, interim director Julie Micou Cerf said.

The alliance is focused on advocating projects included in the park’s current master plan, which doesn’t include the ballfield. While the alliance has a close relationship with the college — O’Donnell is a board member — there are no plans yet to begin major work on the ballfield.

“We’d have to see what they have in mind,” Cerf said. “We haven’t seen anything, no specifics about that at all. And, of course, we want to make sure the whole community has access to the park.”

Still, Manhattan College officials hope something can make their field of dreams a reality.

“I do want (the team) in there by 2020,” Reilly said. “I want it playable, where they can play a game there. It may not be optimal right away, but … if they allow me to, I’m going to aim high and hope that we can have that stadium there.”