Award-winning photographer thought it was just another accident, but instead he fought for his life 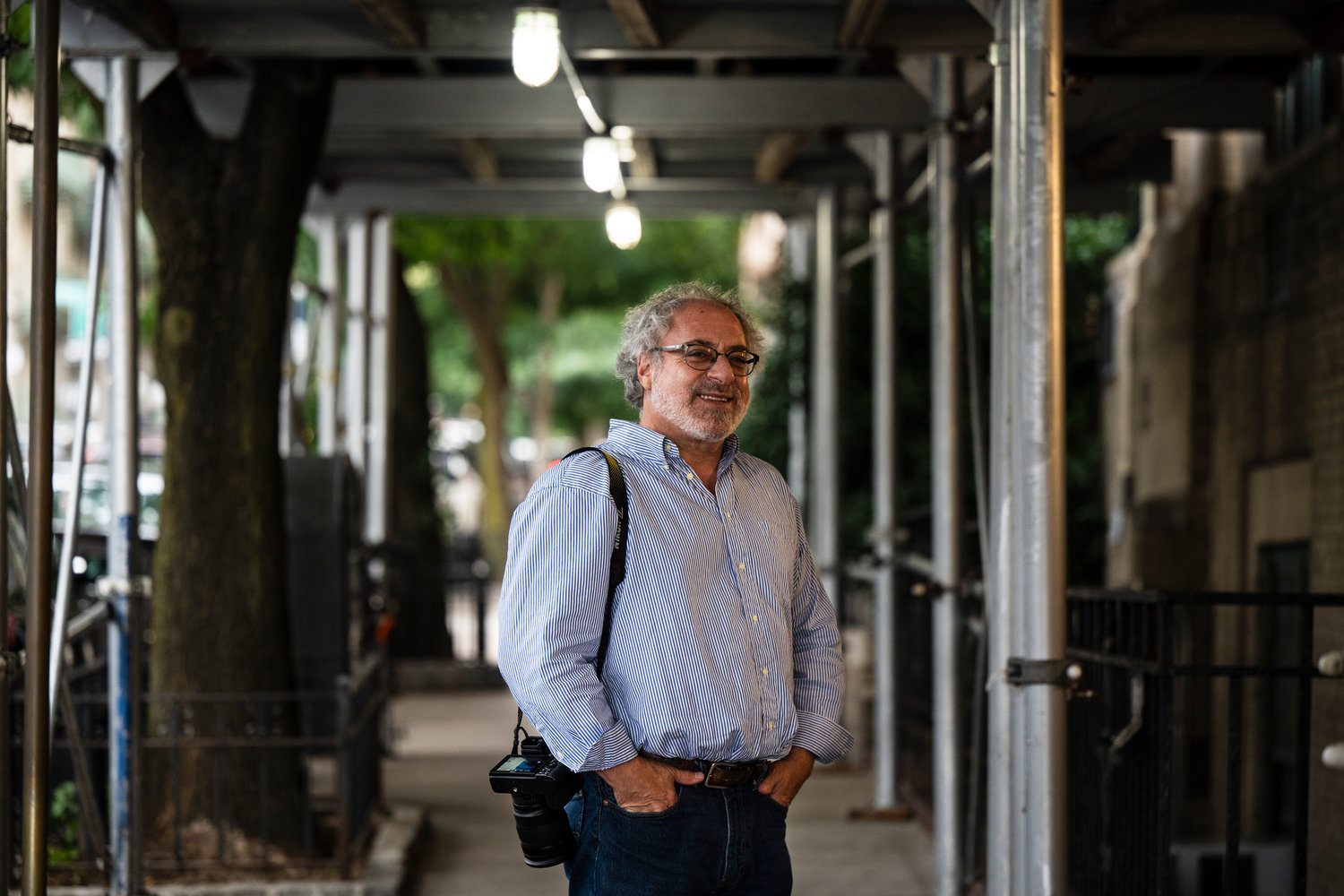 As a teenager David Handschuh would visit The Riverdale Press offices on Broadway, selling spot news photos he took and developed to David Stein. Becoming and award-winning photographer as an adult, Handschuh never realized the biggest threat to his life would come in lower Manhattan on Sept. 11, 2001.
HIRAM ALEJANDRO DURÁN 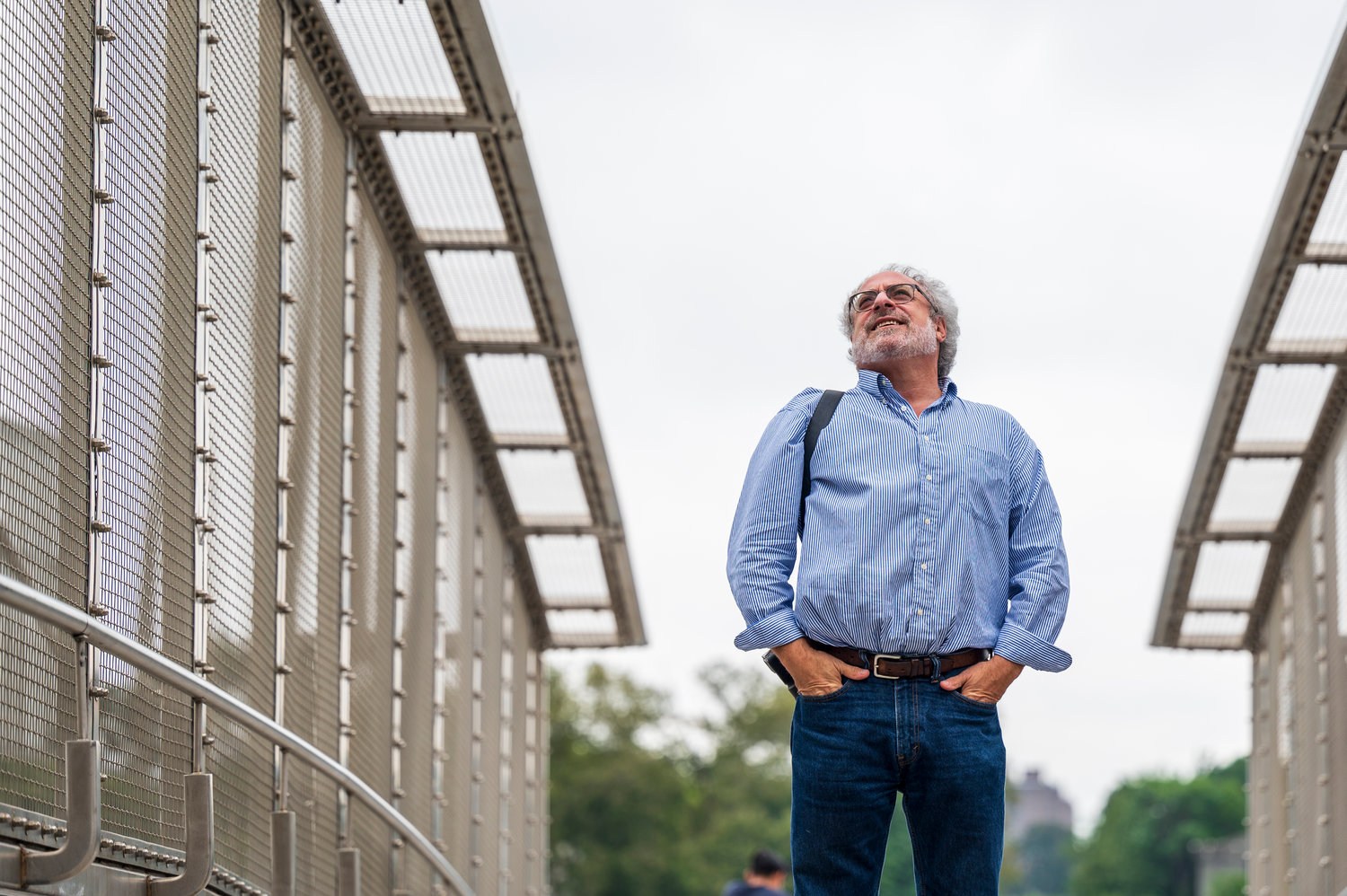 As a teenager David Handschuh would visit The Riverdale Press offices on Broadway, selling spot news photos he took and developed to David Stein. Becoming and award-winning photographer as an adult, Handschuh never realized the biggest threat to his life would come in lower Manhattan on Sept. 11, 2001.
HIRAM ALEJANDRO DURÃN
Previous Next
By MICHAEL HINMAN

Outside, lower Manhattan bustles with activity. But within the confines of the 9/11 Memorial & Museum, the waterfalls inside the twin footprints of where New York City’s original World Trade Center stood creates a serenity unmatched anywhere.

David Handschuh finds himself drawn to the memorial pools — especially as the anniversary of the Sept. 11, 2001 attacks nears — slowly walking around both, quietly reading every name on each of the 152 bronze parapets that border the pools. More often than he would have ever wanted, Handschuh stops at a name he recognizes from his many years as a Daily News photographer.

He thinks about them a bit, and then says a simple “hello.” He’ll do this over and over.

“I have some conversations in my mind with people who I remember,” Handschuh said. “It’s a good place to think.”

Some of those names are from Rescue 1, racing down the wrong side of traffic toward the burning structure just before 9 a.m., that day. Handschuh snapped some photos of the truck with the smoking north tower in the distance. None of those first responders would return.

But there are four other names Handschuh will never forget, either. Yet, he won’t find them at the memorial because they were not lost that day. Instead, they pulled him from underneath the rubble of the south tower. And if it weren’t for Jimmy Hart, Tom McGoff, Tommy Michel and Danny Naughton, Handschuh wouldn’t be alive today.

Handschuh cannot remember a time when he didn’t want to be a photographer. Growing up in Riverdale, he would transform the family’s bathroom into a makeshift darkroom. He’d set up his photo enlarger used to expose prints on the closed toilet, and carefully place the developer and fixer chemical trays in the bathtub.

When he felt a picture was worthy, Handschuh would trek down to The Riverdale Press office on Broadway, and head straight for David and Celia Stein who he remembers were always there, always busy. He might have been a teenager, but the Steins were impressed with Handschuh’s work. Not only would they buy some prints, but more often than not they would end up on the front page.

Some of his earliest work, in fact, can be found on the front of the newspaper’s July 6, 1978 edition. A tattooed and mustached police officer named Fred Fata — donning his uniform cap — squares up with a baseball bat at home plate, part of a fundraiser baseball game between the 50th Precinct and the Riverdale-Kingsbridge-Marble Hill Chamber of Commerce.

“They were always encouraging you,” Handschuh said of the newspaper’s founders. “You’d walk in, and they’d be sitting at a desk in the corner. They both were there all the time, and they were very, very hands-on. They had a strong belief in community, and also an understanding that probably carries on today that people need to start journalism somewhere, and that this is a good place to start.”

When he became an adult himself, Handschuh quickly made a name for himself as a news photographer — first at the New York Post, and then for the Daily News, where he worked more than 25 years, beginning in 1988.

On Sept. 11, he was racing to shoot pictures of a plane accident. Yes, it was one involving the World Trade Center, but even for someone like Handschuh who witnessed many unusual events in his life, nothing prepared him for what he found when he arrived on scene.

“Nobody would think that somebody would fly a full-sized passenger plane into a tower loaded with people going to work,” Handschuh said. “So in my mind process, it was basically some idiot flew a Cessna or a small plane and hit the building by accident. You were learning how to fly, or there was a gust of wind.

“Up until the morning of Sept, 11, 2001, I don’t think anybody thought that jet airplanes were going to be used against civilians like this.”

Handschuh was keeping what he thought was a safe distance from the spectacle, staying close to the south tower while its twin brother burned. He was snapping some pictures from his vantage point at 9:03 a.m., when a loud engine sound directly above him caught his attention, and he watched as United Airlines Flight 175 crashed into the building right next to him.

“It’s then that you realize this is no accident,” Handschuh said. “It was intentional. But there was still never any doubt in my mind that the thousands and thousands of people inside would be saved. There wasn’t a scintilla of belief in my mind that both towers would come down.”

Because of that, Handschuh stayed put, working purely off his journalistic instincts to capture every moment he could with his lens. But all of that would change just 56 minutes later when the building Handschuh sought refuge near became no more.

Saved from the brink of death

“The only warning I had was a very, very large sound,” Handschuh said. “I looked up and I saw the building turning and starting to fall. I brought the camera up to my eye to take a picture, and then I started to run. I missed the picture, but I’m here.”

Except Handschuh almost wasn’t. His legs could not carry him to safety in time as the south tower’s 110 floors crashed back down to the earth. Handschuh was completely buried in rubble.

“I lost my lens. I lost my cell phone,” he said. “I lost my glasses, which I think was a very good thing, because it kept me from seeing how badly injured I was, and to realize what really happened.”

Even 20 years later, Handschuh doesn’t remember much of his time under the rubble. He can’t even say how long he was there, except he knows it was less than 30 minutes, since his lifesaving firefighters pulled him from the debris before the north tower collapsed as well.

Leaving his shoes behind, the firefighters carried Handschuh out, shooting past another Daily News photographer, Todd Maisel. His picture of the first responders carrying the bearded, soot-covered man would become one of the iconic images of that day.

Maisel followed them to a deli near Battery Park, and it was there he found out the man being rescued was his Daily News colleague.

“I gave him my two cameras and lenses,” Handschuh said. “They had pixels and pixels of history on them, but I realized that I wasn’t going to be able to get into the office to upload my pictures.”

Handschuh’s legs were mangled from the debris, but it wasn’t until much later he realized how close he had come to death that day. If those firefighters hadn’t rescued him, Handschuh would have certainly been killed when the north tower collapsed. Even Maisel had a guardian angel that day — Handschuh believes if he hadn’t followed his rescue from the debris, he would have been caught in the north tower collapse and likely perished.

Life since that day hasn’t been easy. It took a long time and a number of procedures before Handschuh could walk again. And the memories continue to haunt him.

After 9/11, Handschuh stopped covering dangerous breaking news events, and instead focused on feature photography. Even now, calling himself the “Flying Manatee,” Handschuh concentrates more on the calm of nature and the quiet world around him. Every day he works to put what happened to him on Sept. 11, 2001, behind him.

“You know, these days, I’m making cranky old-man noises, but it’s probably because I’m a cranky old man,” Handschuh said. “Then again, it’s remembering, ‘David, shut up. You’re here, and so what if you have aches and pains and things aren’t working the way they should be.’ I have the luxury of being alive to deal with those health issues.”

Every year, he reconnects with the four men who carried him to safety that day, getting together at the same site where they first met. And his message to anyone he shares his story with is simple: “always remember.”