HELP IS ON THE WAY?

COVID-19 not too kind to anyone, but some proprietors — especially of Black-owned shops — are hit extra hard 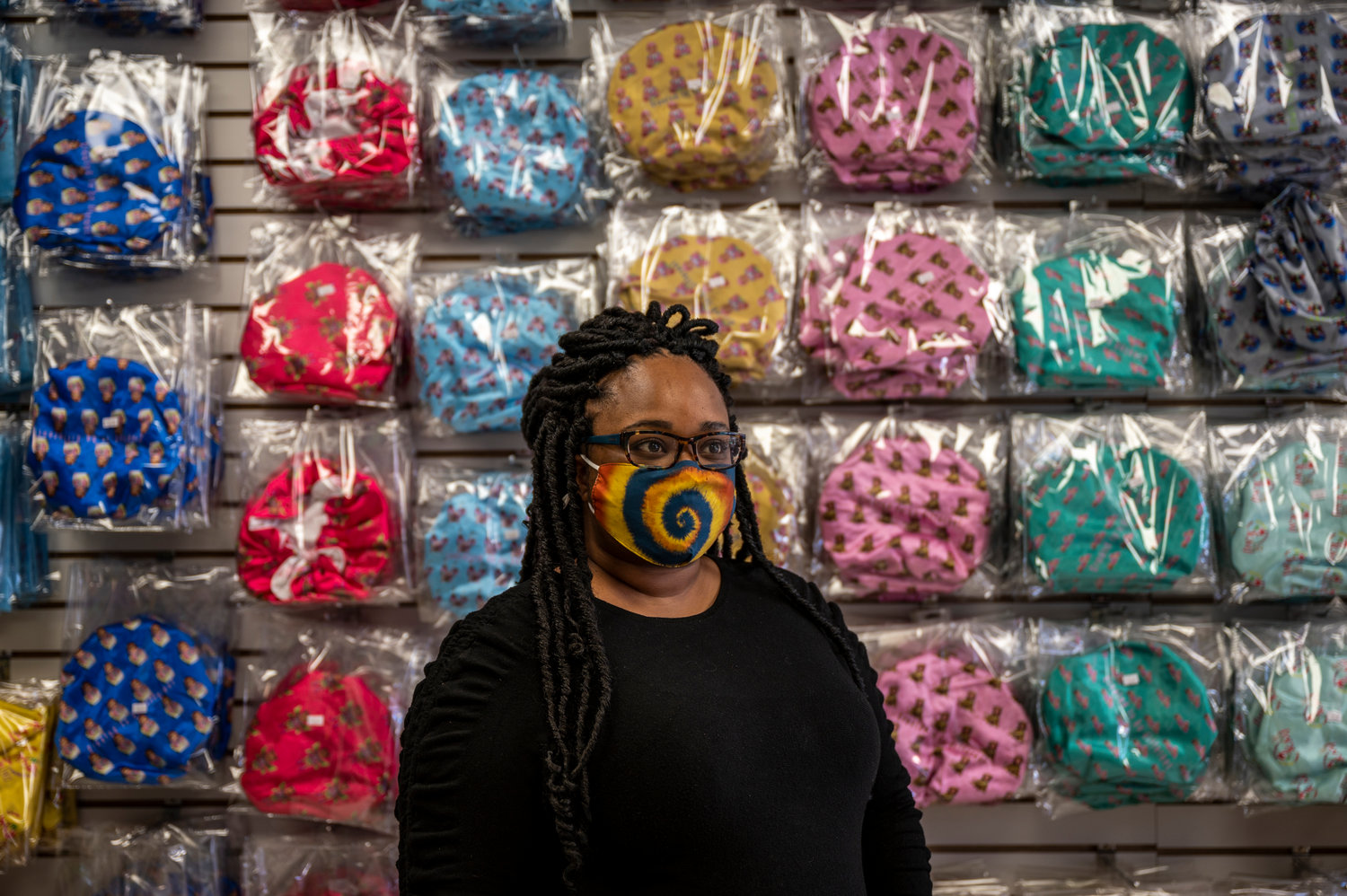 Racquel Johnson was inspired to start her new adaptive clothing store, KMJ Love Wear, after the death of her 5-year-old daughter, who had cerebral palsy. The Black-owned store opened in December and has had some struggles getting traffic to her North Riverdale storefront because of the coronavirus pandemic.
HIRAM ALEJANDRO DURÁN 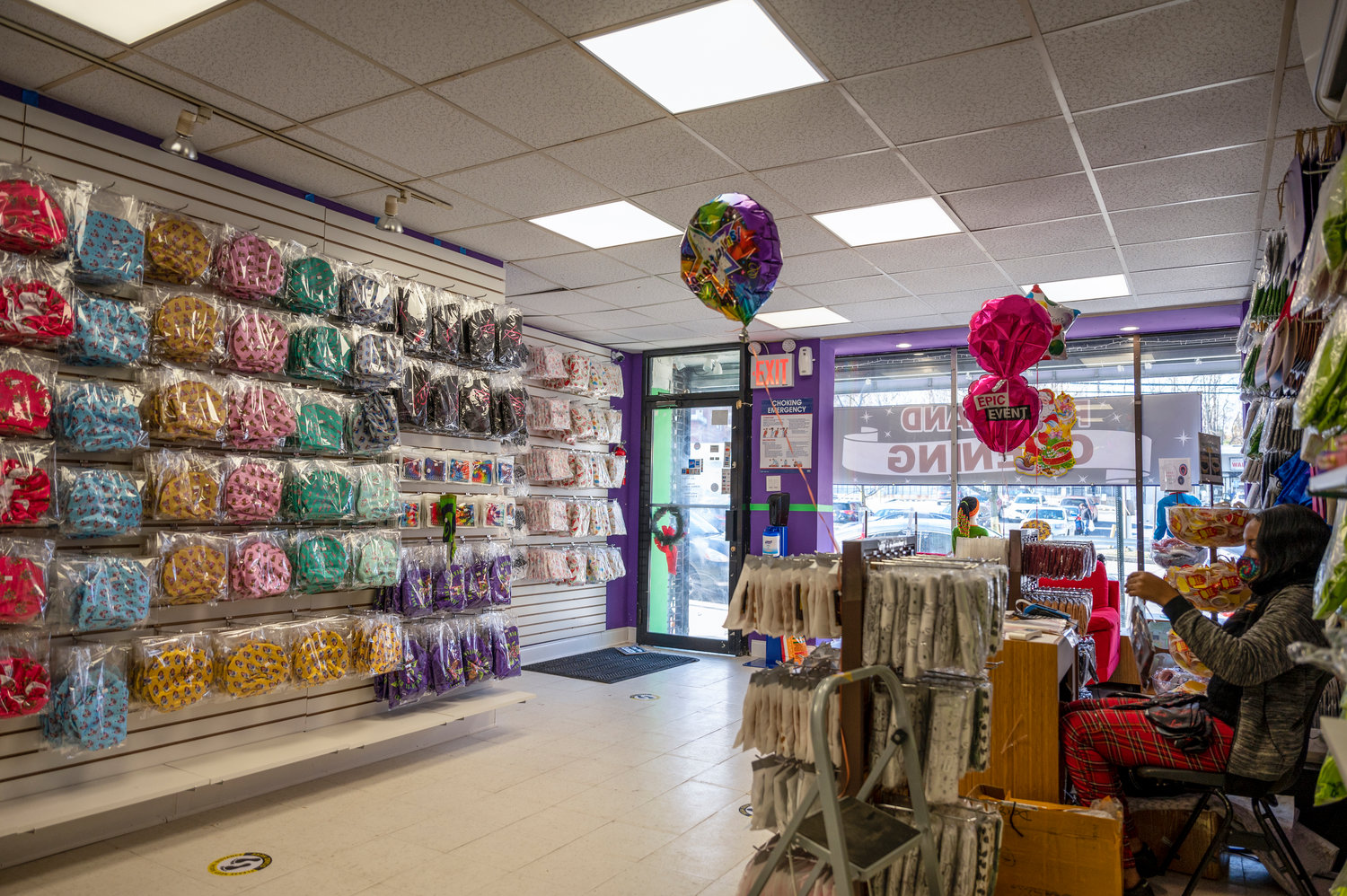 KMJ Love Wear sells adaptive clothing for children with disabilities who have to be fed through surgically placed gastrostomy tubes, says founder Racquel Johnson. The store opened in North Riverdale late last year as one of the neighborhood’s few Black-owned businesses. And it’s been rough going because of the coronavirus pandemic, Johnson says.
HIRAM ALEJANDRO DURÁN 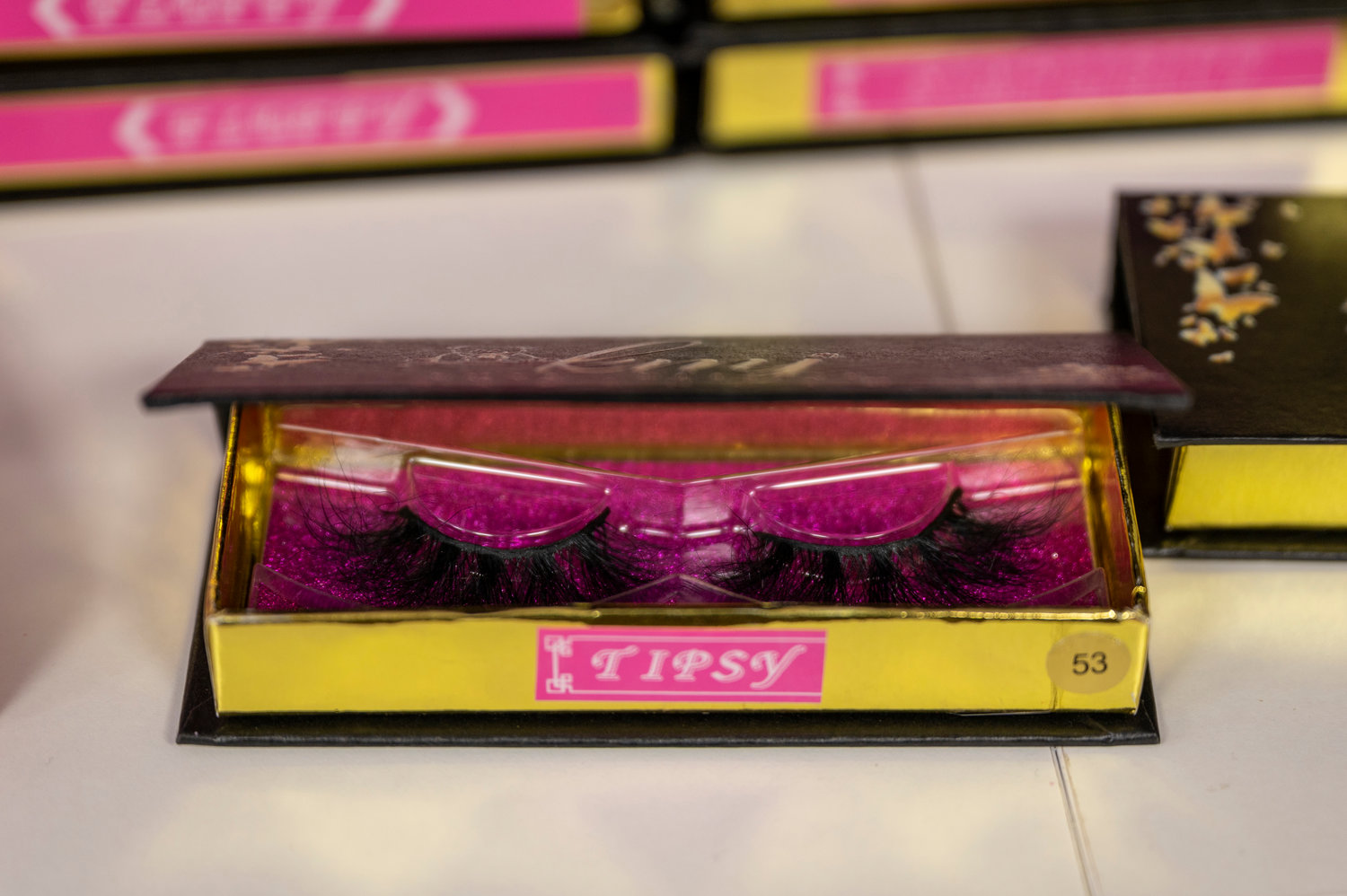 Looking stylish is really important to Racquel Johnson when she designs her clothing and accessories for children with disabilities, sold at KMJ Love Wear. Johnson opened her North Riverdale store last December, right in the middle of the coronavirus pandemic, and has struggled with attracting steady business.
HIRAM ALEJANDRO DURÁN 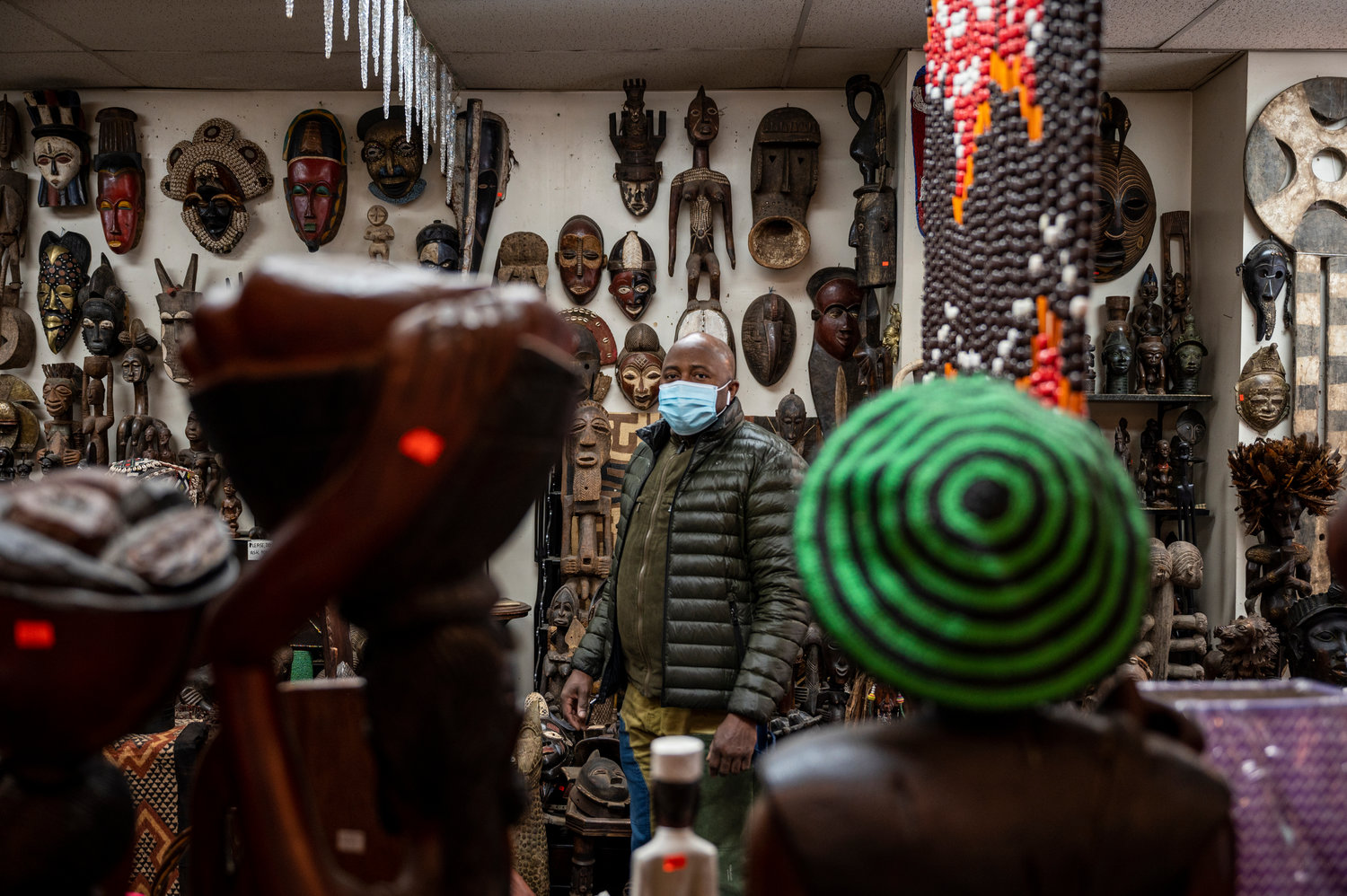 Cheick Conde has owned African Masidi and Co., a pan-African art store in Kingsbridge, for more than 25 years. Things haven’t been easy during the coronavirus pandemic, however. The store closed for five months, and now foot traffic is down significantly from more normal times.
HIRAM ALEJANDRO DURÁN 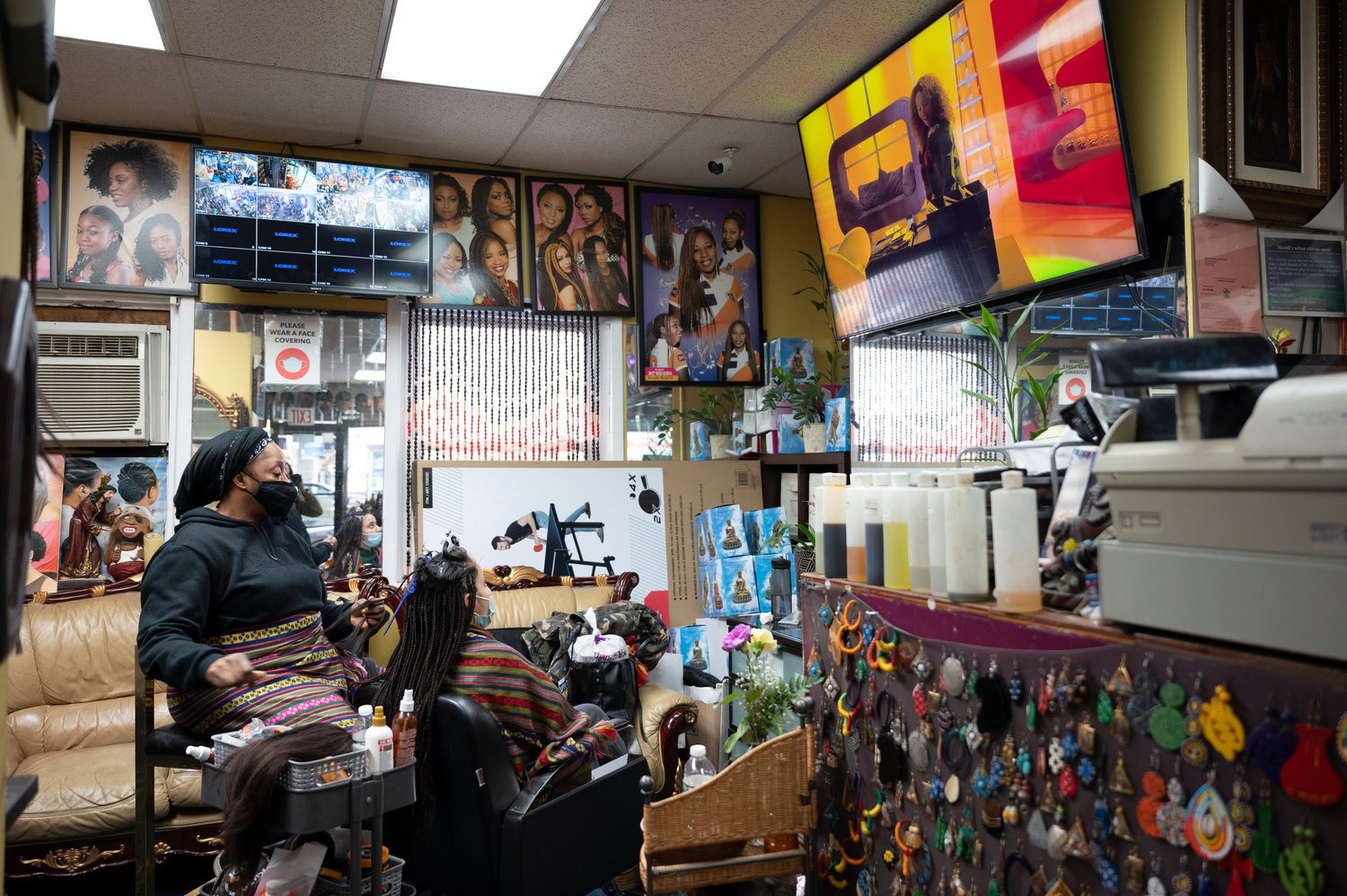 In addition to selling art in the front, African Masidi and Co., also offers hair-braiding in the back, says Cheick Conde, the store’s owner. The coronavirus pandemic has significantly reduced foot traffic to his Kingsbridge store, which has forced Conde to struggle.
HIRAM ALEJANDRO DURÁN 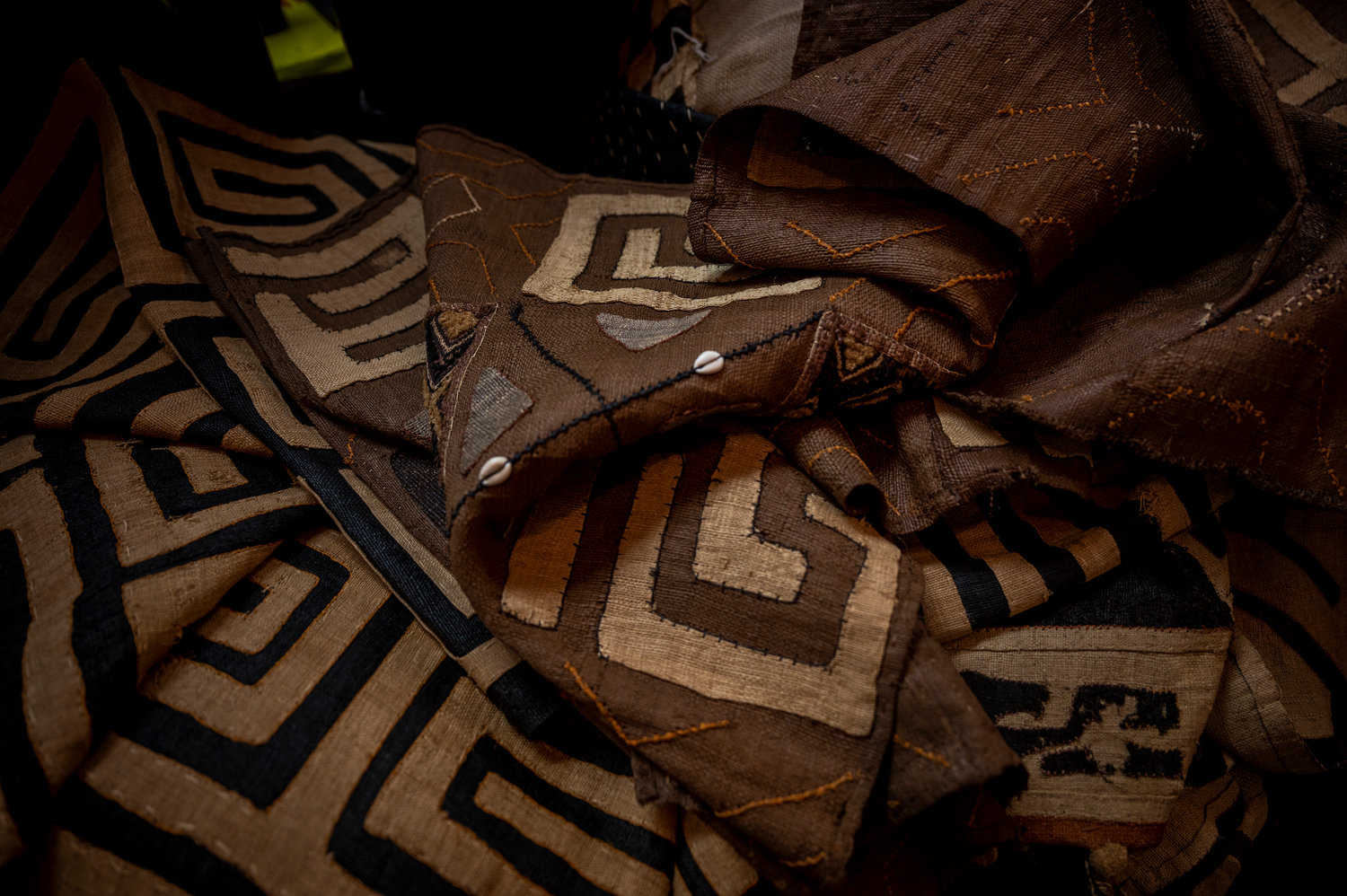 The Kingsbridge art store African Masidi and Co., used to partner with schools and houses of worship to host African-themed fashion shows with their wears, says founder Cheick Conde. Unfortunately, activities like this have been put on hold during pandemic times.
HIRAM ALEJANDRO DURÁN
Previous Next
By ETHAN STARK-MILLER

It would be a gross understatement to say this past year has been tough for small businesses.

Retail stores, restaurants, bars and cafes all have struggled to survive since the coronavirus pandemic hit a year ago. Many have received the attention they deserve, but others, more often than not, are overlooked. Many, unfortunately, have one thing in common: they’re Black-owned businesses.

Even when they do get attention, like Buunni Coffee on Riverdale Avenue did last month, odds have not been good in saving what already are a limited number of Black-owned businesses in this part of the Bronx. Buunni became quickly ingrained in the community after it opened in early 2018, offering a hangout spot for kids after school as well as a meeting place for advocacy and political groups.

Buunni, however, isn’t the end of Black-owned businesses in the community. Instead, it’s a continuation. Still, the effects of COVID-19 are hard to avoid, something Racquel Johnson has experienced for herself.

She opened KMJ Love Wear at a former Subway restaurant location on Riverdale Avenue late last year. There, Johnson sells adaptive clothing for young children with disabilities. In particular, clothes are designed for kids who require the use of a gastronomy tube, a device that is inserted into the abdomen, delivering nutrition directly to the stomach.

Johnson is from Jamaica, but grew up in the Bronx. She named her store using the initials of her late daughter, Kaidence Mara Johnson. Its mission was inspired by her story.

“After her passing, I wanted to turn my pain into joy,” Johnson said. “So, by doing that, I came up with this idea and I just went after it.”

Kaidence was born with cerebral palsy and severe brain damage. She required a G-tube, which made it hard to find the right clothing for her that would actually fit. Ultimately, only dresses really fit Kaidence, meaning she was naked a majority of the time.

Kaidence was just 5 when she died four years ago.

In her daughter’s memory, Johnson started designing adaptive wear that allows caregivers easy access to help children with feeding tubes. Her bodysuits are customized with a square Velcro opening on the abdomen for the G-tube, making it easier to keep the area clean and avoid stains.

“I wish I had gotten this opportunity while she was alive because things would have been so much easier,” Johnson said. “But I just decided to honor her memory by doing this.”

Part of Johnson’s mission is making KMJ Love Wear’s products fashionable as well as functional. She designs the clothes herself with the help of a sketch artist, and then uses a tailor to bring them to life.

Starting a new business during the coronavirus pandemic has been difficult, Johnson said, because foot traffic along her portion of Riverdale Avenue has been slow. That means many haven’t even noticed the new store yet. Johnson paid rent a year in advance, remaining closed for several months while she set up shop.

“And it’s like all of that money went down the drain because COVID came,” she said. “So, I’m still waiting to see what (the landlord) can do to assist me, giving me some back time or something.”

Even Black-owned businesses that have been around for decades are struggling to stay afloat amid the pandemic. African Masidi & Co., located at 5616 Broadway in Kingsbridge, closed up shop for the first five months of the public health crisis, and has seen reduced business since reopening.

“Because of the pandemic, things are slow, and the traffic is not the same anymore,” said Cheick Conde, who owns African Masidi with his wife. “And activity-wise, it’s the same thing. We reduced significantly all of the activities because you have to go according to CDC guidelines.”

The store has offered the neighborhood not just art from across the African continent, but also hair braiding since it moved into its current space more than 25 years ago. African Masidi originally made its home in Brooklyn’s Crown Heights, but moved to Kingsbridge in the mid-1990s because there weren’t many other stores like it in the area. And rent was far cheaper.

Conde sells a variety of African art in the gallery, including everything from antiques to contemporary pieces. He even sells instruments like the mallet-based marimba and the stringed Kora.

“We do this because people are in need of art,” Conde said. “And we want to promote the culture at the same time.”

Before the pandemic, Conde often partnered with schools and houses of worship during Black History Month as well as other parts of the year. That stretched from  the John F. Kennedy Campus to Lehman College, and religious institutions like the Riverdale Jewish Center. Conde would set up booths selling garments, or host workshops teaching kids how to play African drums.

“We’re normally in the community,” Conde said. “Also, when people come, we’re open for business as well as for questions. Like, whatever they want to know about the art, we give them the history. We have books here in the store that people use to educate themselves.”

Another legacy Black-owned business in the neighborhood fallen on hard times recently is Lloyd’s Carrot Cake. But not because of the coronavirus, so much as the sudden passing of its beloved co-founder, Betty Campbell-Adams. The Broadway bakery across from Van Cortlandt Park is now run by Campbell-Adams’ children, Lilka and Brandon. Their father Lloyd died in 2007.

While things have been hard without their mother, Lilka and Brandon Adams are doing everything they can to keep the Lloyd’s legacy going. The community has been very supportive since Campbell-Adams’ passing, Lilka said, and business has remained steady despite the pandemic.

Starting a business as a Black woman bears a lot of significance, especially in 2021, KMJ’s Johnson says. “It signifies strength during this time, you know that we’ve been facing, as a woman of color.”

Lilka agrees. She wants to make it clear her parents’ legacy stands for something bigger than just making delicious carrot cake.

“My parents are a part of Black history,” Lilka said.

“They started this business from scratch. And it’s become this phenomenon in not just the Bronx, but New York City and beyond.

“I think it’s a part of our historic culture. Black culture. And I’m proud to say that.”