Cabanas saves woman’s life, all in a day’s work 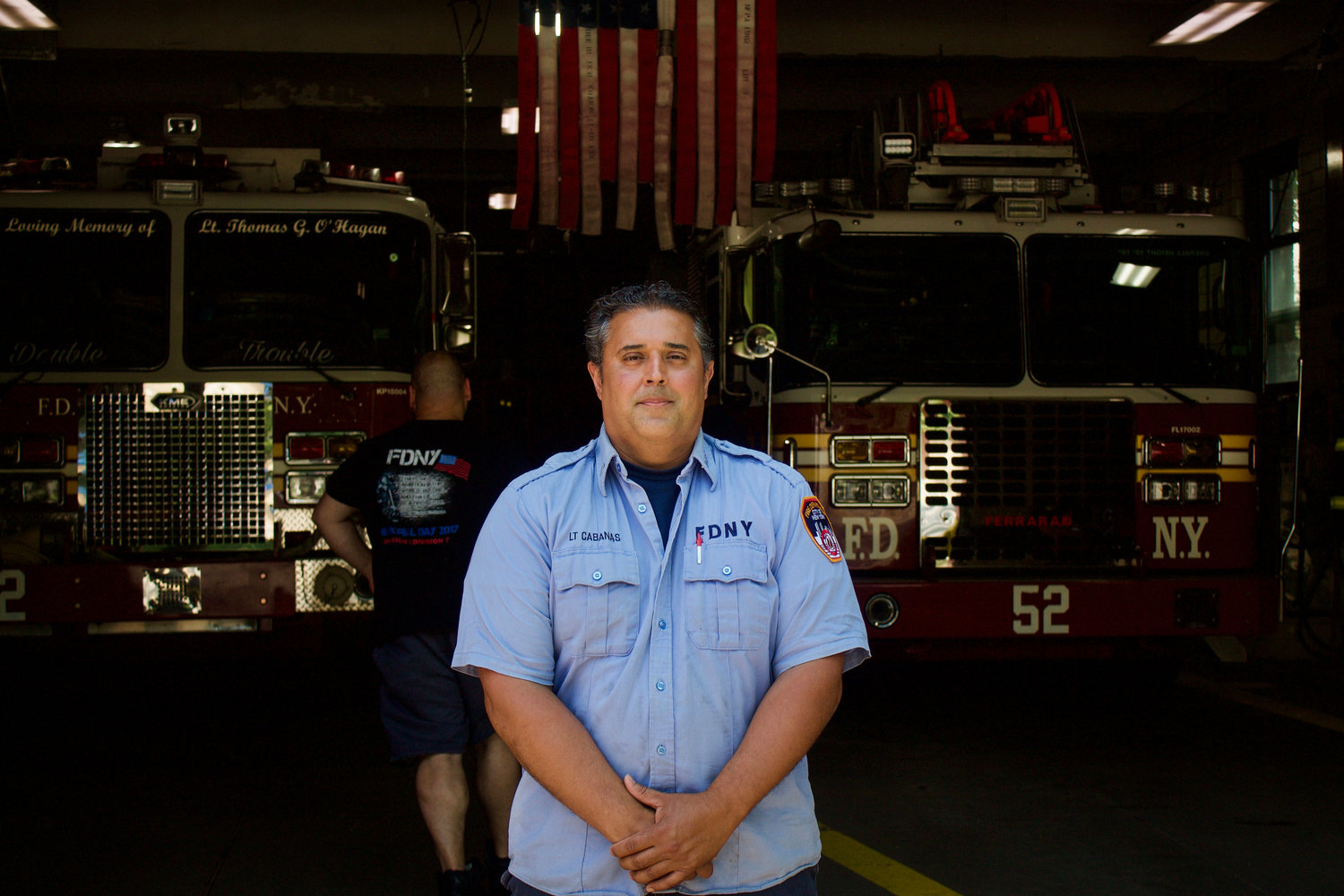 Lt. Gilbert Cabanas led his Ladder 52 crew into a sixth-floor apartment on West 240th Street on Nov. 4, 2019. He suffered second-degree burns to his hands and face while saving a woman’s life. That earned Cabanas the 2020 Hispanic Society/23rd Street Fire Memorial Medal of Valor for his heroics.
BRENDAN O'SULLIVAN 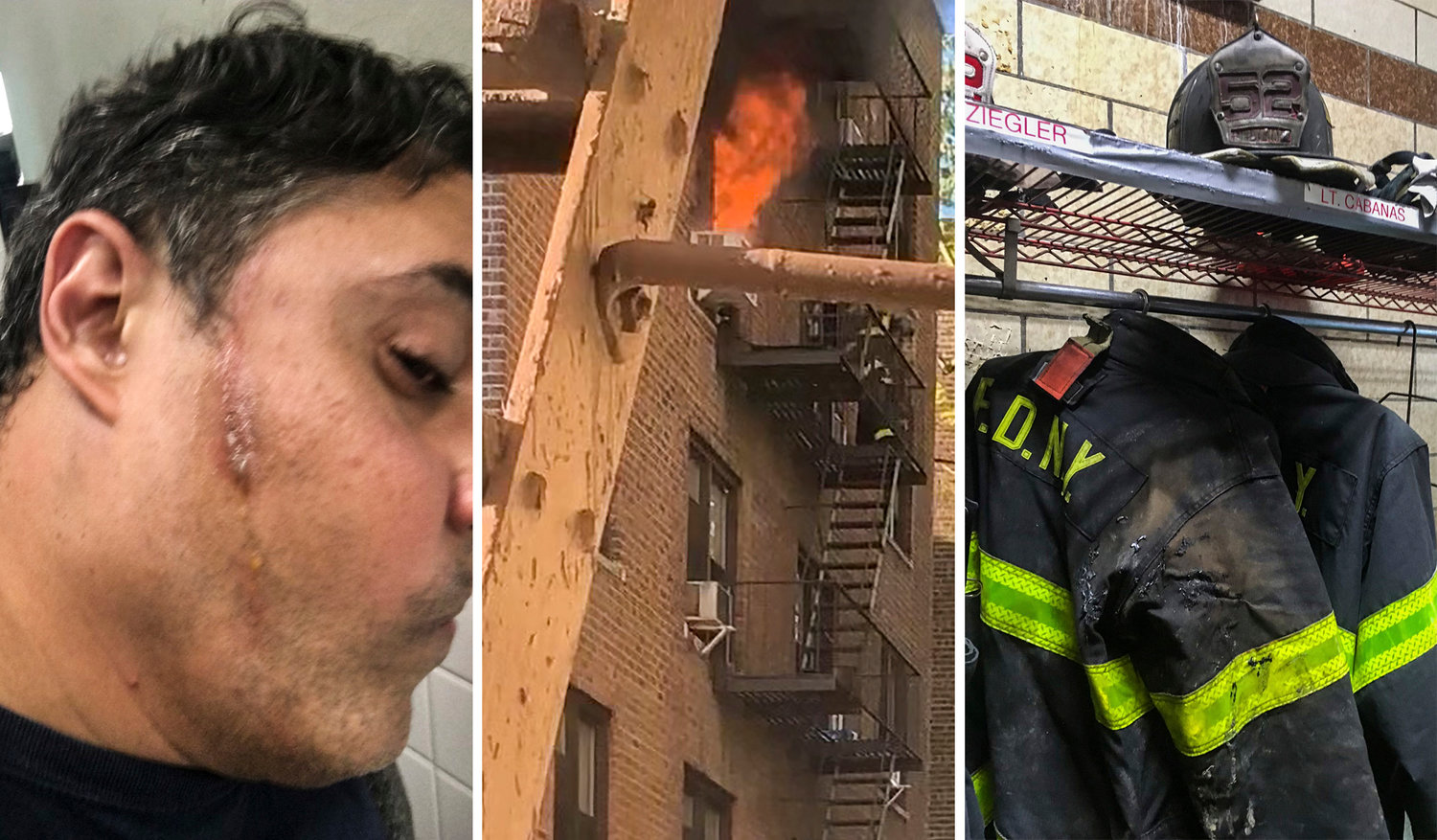 When Ladder 52 responded to a fire on the sixth floor of an apartment building on West 240th Street on Nov. 4, 2019, Lt. Gilbert Cabanas ran inside and saved a woman’s life. He suffered second-degree burns to his face and hands in the process, sending him to the hospital. As soon as he was discharged, he hugged his kids.
Courtesy of Gilbert Cabanas/ Illustration
Previous Next
By BRENDAN O’SULLIVAN

They’re widely considered heroes, putting their lives at risk on what seems like a daily basis to save others.

Unfortunately, not all firefighters are honored for their heroics. But Gilbert Cabanas is an exception.

The Ladder 52 lieutenant earned the 2020 Hispanic Society/23rd Street Fire Memorial Medal of Valor for a particular act of heroism he performed after being called to an apartment building at West 240th Street on Nov. 4, 2019.

“That day showed me how dangerous this job is,” Cabanas said. There’s a “tremendous amount of responsibility. Had we not gotten to that lady … we would have been mourning the loss of three firemen.”

No one expected the fire to be this deadly. It all started when Ladder 52 responded to a call of a fire on the sixth floor of a West 240th Street apartment building. Cabanas and his crew of firefighters climbed flights of stairs in search of the afflicted apartment. They were initially misled by one person in the building, and then told by another it was not a “big deal.”

Nevertheless, the firefighters weren’t leaving until they saw the affected apartment themselves. When they made it to the sixth floor, Cabanas noticed no smoke in the hallway, but the apartment door began charring.

“We looked at the door, and it was browning as we were looking at it,” Cabanas said. We “forced entry into the door. Once we got in, it lit up on us. We were literally engulfed in flames.”

They crawled into the hallway and regrouped. Shortly after, they learned a woman was trapped by the window and ready to jump. They were trying to wait for Engine 52, the truck providing the hose, to arrive so they could pave the way toward the woman.

But after hearing she was close to jumping, Cabanas knew he had to make a second push.

“It’s a whip,” Cabanas said. “All right, we got to get in there. She’s going to jump. You don’t want that on your conscience.”

Personnel from Engine 52 arrived and stood behind Cabanas as he pushed into the apartment. He bypassed the flames and threw himself into the door he believed she was behind.

The bedroom was filled with smoke, yet Cabanas somehow saw the woman. She was by the window with a cat in her hands, ready to throw him to the street before Cabanas reached her and pulled her back.

“She seemed like she was getting to the point where she wasn’t going to be able to make it,” Cabanas said. “I knew eventually the conditions were going to start lifting.”

With Engine 52 in position with the hose, the woman put her arm around Cabanas and the two safely made their way out of the apartment into the hallway.

Once rescued, she was escorted downstairs while firefighters worked to put out the flames that Cabanas described were on “everything.” The floors were burned through.

“It got pretty intense in there,” he said. “I got to admit, I’ve done this for 20 years — that was definitely one of the most intense fires I’ve ever been to.”

Cabanas suffered second-degree burns to his hands and face, and his equipment was burned as well. He went to the hospital for treatment.

Andrew Heaphy, the firefighter who drove Ladder 52 to West 240th with Cabanas, learned how brave Cabanas was that day.

“What did I learn? That he is always making sure his team is safe,” Heaphy said. “That if anyone is going to risk an injury in order to save a civilian, it’s going to be him.”

While Cabanas earned the medal for his heroics, he shifted the praise to his fellow crewmates at the Henry Hudson Parkway East station. Specifically, Heaphy, who saved a man from the same apartment.

Heaphy extended the outside ladder to its maximum height to reach the window of a man who was signaling for help. He stood on the tip of the ladder, grabbed the man, and brought him down to safety.

“To me, he was the real hero,” Cabanas said.

Heaphy knew if he didn’t stay where he was, there was a good chance the woman would have jumped from the sixth-story window.

“So he did (an) absolutely extremely heads-up move,” Cabanas said.

While this may have been Cabanas’ most intense fire, it isn’t the only one he vividly recalls.

He and his sister were saved by Engine 43 from Sedgwick Avenue when, as a toddler, his family’s stove went up in flames. Afterward, it seemed every school trip landed him at that fire department, which finally convinced Cabanas to become a firefighter himself.

“I wanted to be a New York Yankee, but that fell through,” Cabanas said, with a laugh. “My second choice was the New York City fire department. So basically, I’m living my dream.”

The favorite part of the job for Cabanas is working with everyone at the firehouse. He tries to be a friend and a boss to firefighters like Miguel Salazar.

“He’s definitely a guy you can follow,” Salazar said. “You have confidence (with) him being up front — you’re going to get the job done. He’s definitely a boss you want to go that extra mile for.”

Cabanas is back on the job after taking time off to recover from his burns. He’s enjoying each moment, but maintains his newfound understanding of the job — and the dangers that come with it.

That said, as soon as he left the hospital in 2019, he went home to his family and hugged his kids.

“I know that’s a sappy answer, but it’s true,” Cabanas said. “You don’t appreciate your family on a day-to-day basis until something like that happens.”