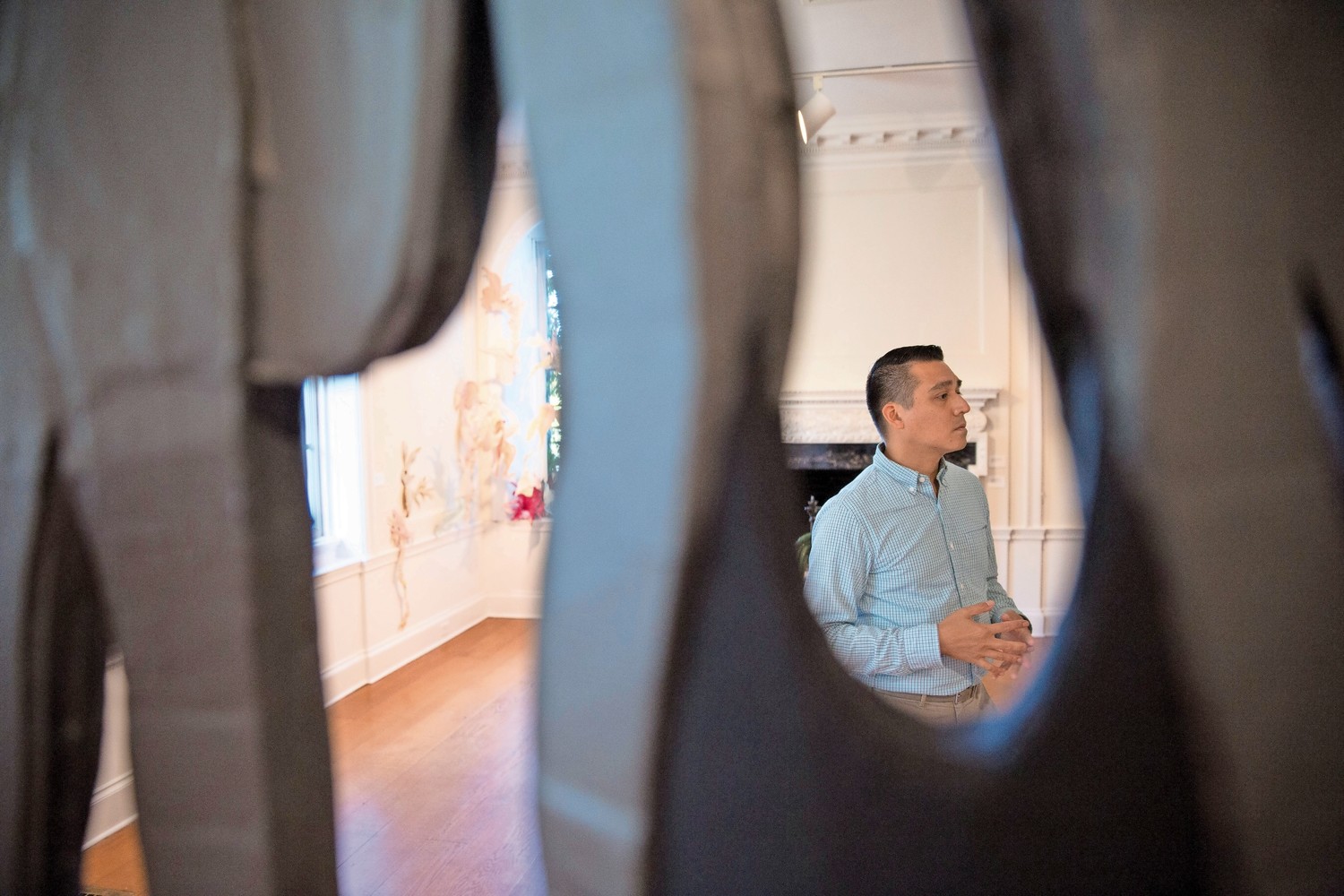 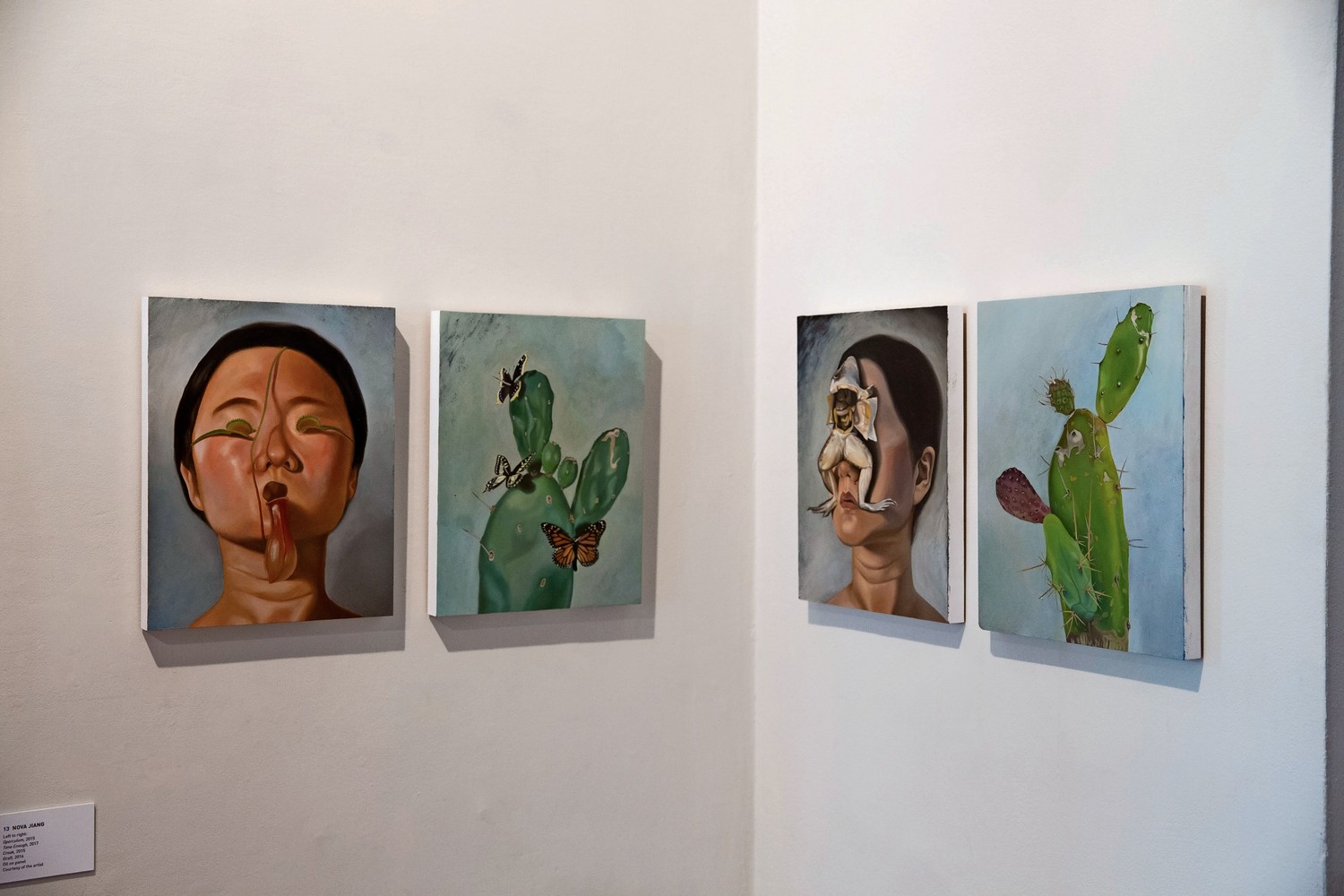 A series of four paintings by artist Nova Jiang are exhibited in the Glyndor Gallery at Wave Hill. The current show, ‘Call & Response,’ celebrates the 10th anniversary of the Sunroom Project Space where emerging artists in the New York area get a chance to explore Wave Hill through their work.
Julia Sclafani 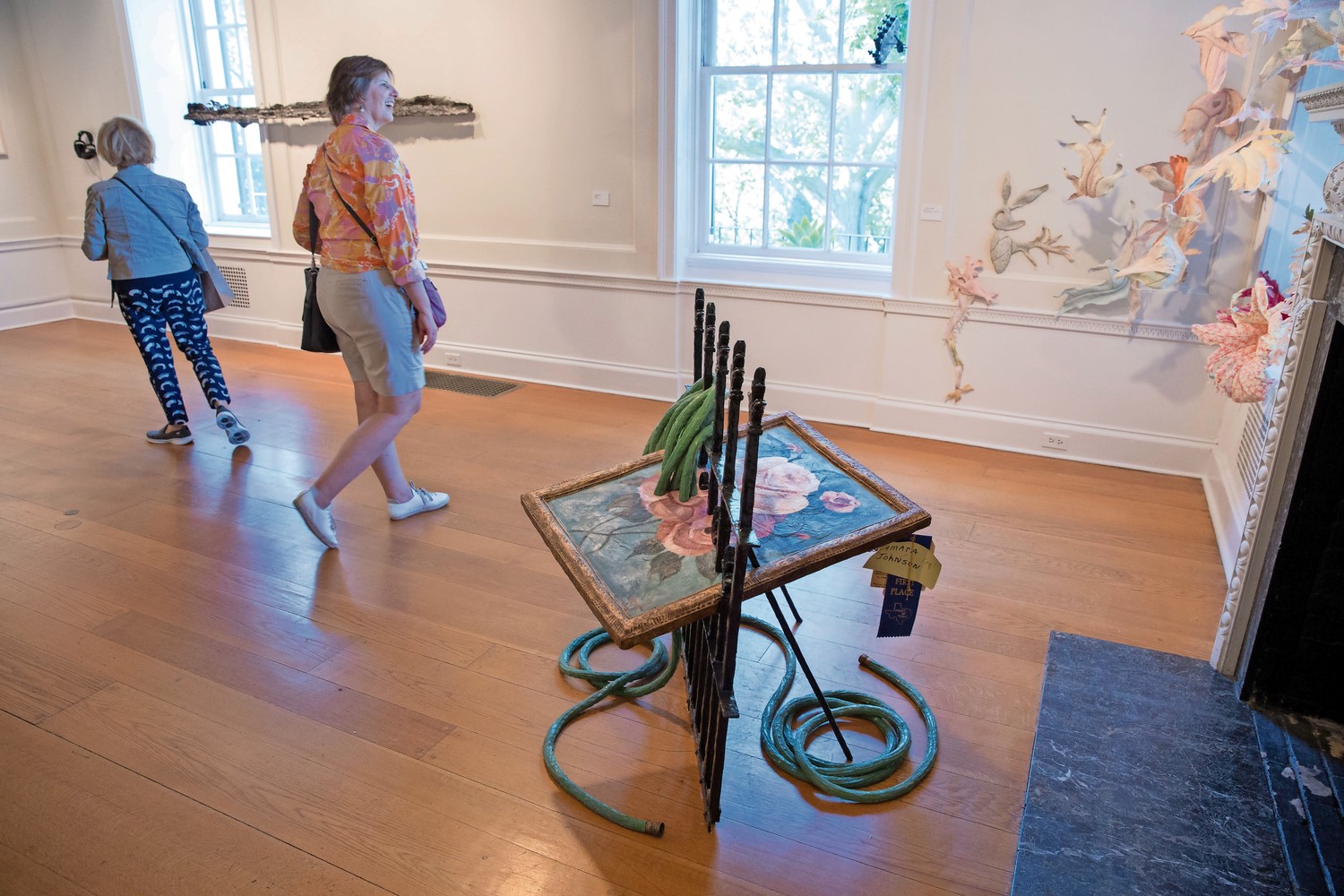 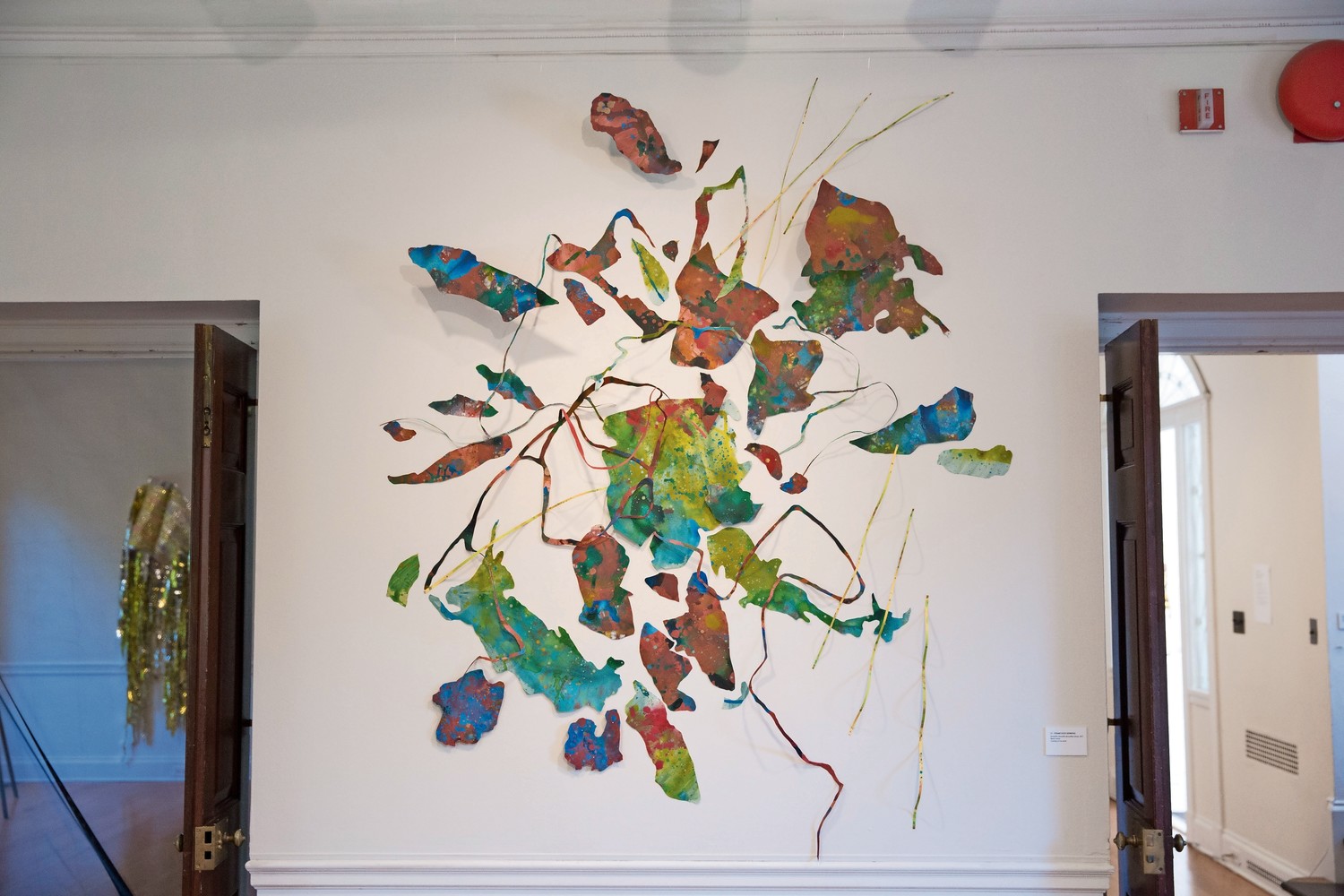 A work based on a map of the Bronx by artist Francisco Donoso is featured in the Glyndor Gallery at Wave Hill. Donoso is just one of the formerly exhibited artists taking part in the ‘Call & Response’ exhibition celebrating the 10th anniversary of the Sunroom Project Space, where emerging artists in the New York area create work related to Wave Hill.
Julia Sclafani
Previous Next
If you go …

Artists may come and go from exhibitions, but at Wave Hill, they’re always welcome to return.

That was the driving force that led most of the 60 former artists who once graced the Sunroom Project Space at Wave Hill’s Glyndor Gallery to make their way back to Riverdale to celebrate 10 years of the space’s opening.

The exhibit, which runs through Dec. 3, takes a look back at how these formerly emerging artists were each given a chance to transform the Sunroom Project Space — a light-filled section of the Glyndor Gallery that overlooks a portion of Wave Hill’s vast garden — to reflect their own thoughts and interpretation of Wave Hill.

Looking back on the decision to introduce this concept to the gallery, Gabriel de Guzman, Glyndor Gallery’s curator, thinks it’s essential for new artists to expand their creativity early on in their careers.

“It’s rare for emerging artists to be given the opportunity to create a full room-sized installation,” Guzman said. “They come to us with ideas for how they want to transform the space, and we’re really flexible to what they might do. The only thing we tell them is that the space has to be able to go back to its original state.”

Since then, some of these artists have gone on to have their work exhibited in Manhattan and even across the world to Seoul, South Korea.

To prepare for the festivities, Guzman and senior arts and education director Jennifer McGregor spent the year before the exhibit’s September opening to invite all 60 artists back to Wave Hill. Now, the exhibit has taken over all of Glyndor Gallery with an eclectic mix of paintings, videos and different forms of mixed media that reflect on Wave Hill’s garden space, its location, or its overall history.

Other artists are taking the work outside the gallery with outdoor performances. One artist in particular, Eto Otitigbe, is presenting his work by creating augmented reality elements of Wave Hill with an app called WallaMe.

It’s tough for Guzman and McGregor to reflect on the most memorable exhibits that have come out of the Sunroom Project Space because they feel there are just so many to highlight. But what stands out in McGregor’s memory was a topography of Riverdale done by artist Steven Millar.

“This project made him look at Riverdale as a place,” McGregor said. “It was very engaging for our visitors who live here to be able to see and think about it in a different way.”

For Guzman, it was a kinetic garden by artist Nova Jiang. She put together a garden maze where there were arms across the space that would change, forcing a visitor to navigate through the maze differently.

The general reception of “Call & Response,” according to Guzman, has been positive so far. Many people he’s spoken to have said they’re surprised 50 artists have taken over Glyndor Gallery.

McGregor believes this response is a result of putting together a coherent show that balances everyone’s artistic point of view.

“Part of it is that it was a really great experience to reconnect with these artists who had a very pivotal and positive connection to Wave Hill,” she said. “Whether they did their project two years ago, or whether they did it eight years ago, Wave Hill was an important place in their mind.”

Guzman hopes that first-time visitors will open their minds to exploring and relating “to different aspects of Wave Hill they might’ve not done on their own, or thought on their own,” he said.

The experience of putting this 10-year anniversary exhibit together just reminded him of everything that Wave Hill stands for.

“I think it’s opened my eyes to how rich our site really is,” Guzman said. “I knew that going into it, but (the exhibit) just sort of reminds you of the richness of what Wave Hill has to offer in both its physical site, its history, and the experience of being here.”