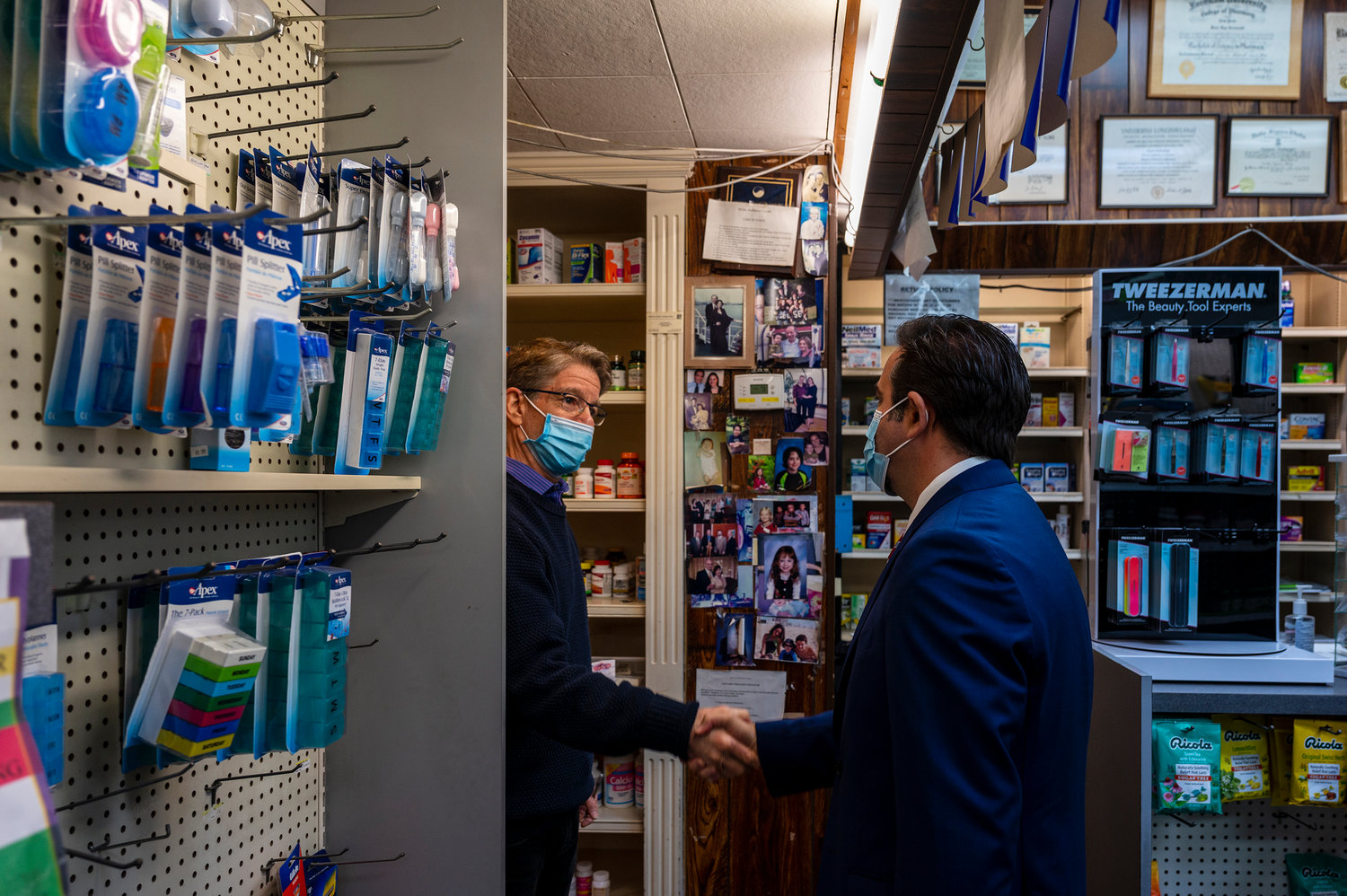 Unlike U.S. Rep. Jamaal Bowman, Manual Casanova says he would’ve voted for the bipartisan infrastructure deal President Joe Biden recently signed into law. Casanova says he’s running against Bowman in this summer’s Democratic primary because he will be able to make deals with those who don’t agree with him.
HIRAM ALEJANDRO DURÁN 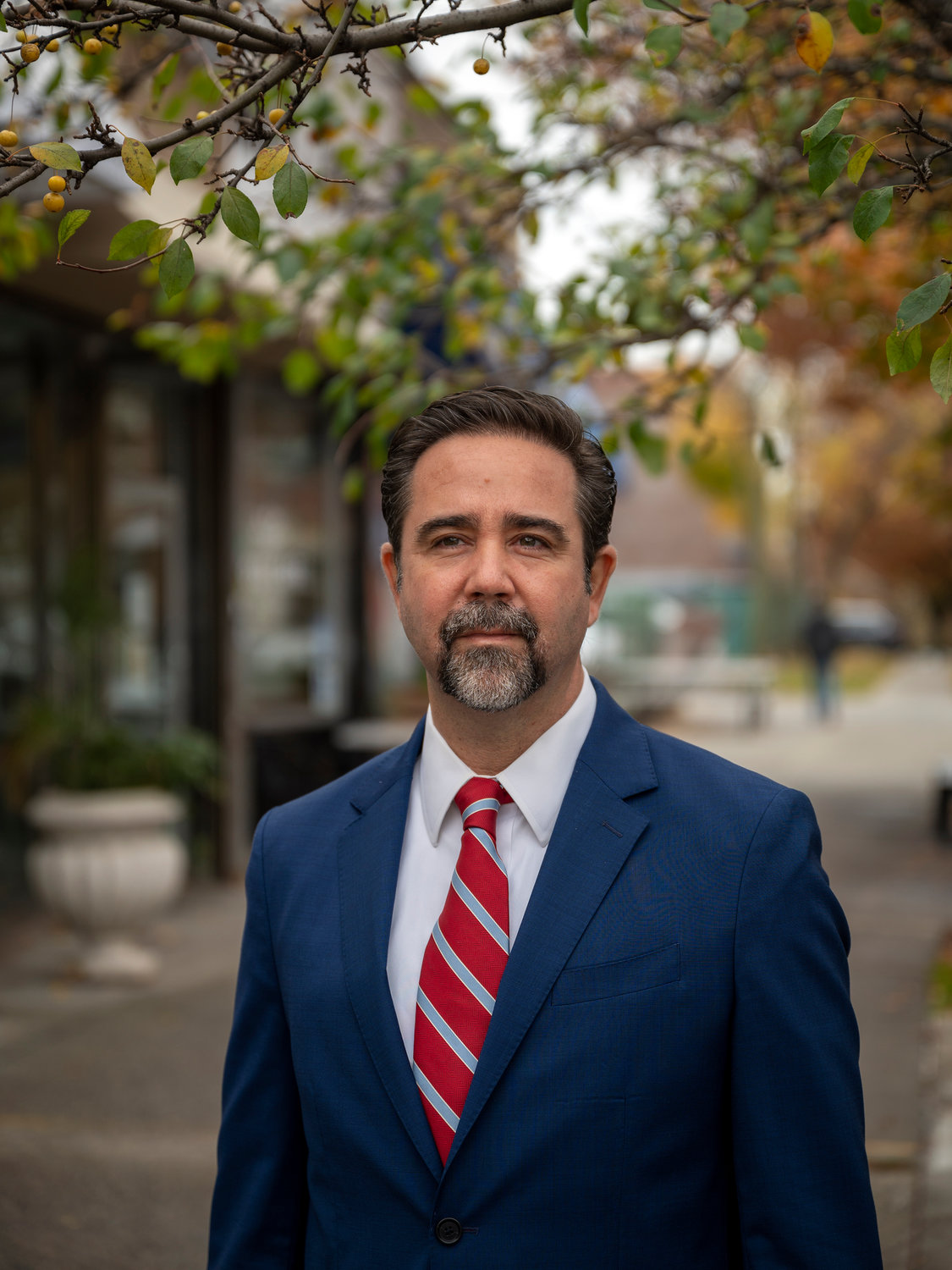 Manuel Casanova, a New Rochelle-based businessman and politico, is running against U.S. Rep. Jamaal Bowman for his congressional seat in this year’s Democratic primary. Casanova says his experience negotiating largee mergers in the private sector has prepared him for making deals with those who don’t agree with him in congress.
HIRAM ALEJANDRO DURÁN
Previous Next
By ETHAN STARK-MILLER

For Manuel Casanova, the attack on the U.S. Capitol last year by a mob of supporters of then-President Donald Trump showed how divided the country truly is.

In fact, it served as a call to action for him to run for office himself.

“I think it is time that we changed the tone, that we change how we’re connecting with one another. That we started listening more to people,” Casanova said. “And that we don’t tell people that ‘because we disagree with you, I’m not going to pay attention to your concerns or needs.’”

Casanova — a businessman and political operative based in New Rochelle — says he sees the bipartisan infrastructure package President Joe Biden signed into law last November as the perfect example of the deal-making he wants to see more of on Capitol Hill. And part of the reason Casanova is running against U.S. Rep. Jamaal Bowman in the June Democratic primary is because Bowman voted against that very infrastructure package.

Bowman cast his vote in tandem with the rest of “The Squad” — a group of left-leaning Democrats that include U.S. Reps. Alexandria Ocasio-Cortez, Ilhan Omar, Rashida Tlaib, Ayanna Pressley and Cori Bush. According to Bowman, the six lawmakers felt they couldn’t support the bill because it was brought to the House floor without the much larger Build Back Better Act. The group had made it clear for several months they wanted the infrastructure bill and Build Back Better Act voted on at the same time, or else they wouldn’t support the former.

Casanova says Bowman’s vote against the infrastructure deal is indicative of the way he governs overall — putting political ideology over getting results. And he would do the opposite.

“I think I am somebody who operates in a completely different fashion as he does,” Casanova said. “I’m somebody who is going to work to unite people, not to split people. I’m somebody who would have voted for the infrastructure deal.”

That’s why, Casanova says, working to make deals with representatives — not just in his own party, but across the aisle too — is a central tenet of his campaign.

“To me, bipartisanship is not a myth,” he said. “Not always you’re going to be able to do it. And Republicans have not been working with us in a serious way in many different areas. And so, it is challenging. But that’s the job. The job is to go and talk to all the rest of the representatives around the country.”

The importance of working with those who disagree with you was instilled in Casanova at an early age, growing up in Chile.

It was the 1970s, and Chile’s democratically elected socialist government was overthrown in a U.S.-backed coup. It was replaced with a military dictatorship that ultimately held power until 1990.

“So, I understand what it means when people stop talking to each other,” Casanova said. “I was 3 years old when that happened. And I (had) to live thereafter (with) the consequences of people not speaking to one another. And it can become very dangerous.”

Casanova first came to the United States as an exchange student in the late ‘80s. He lived with a family upstate for about six weeks — an experience that inspired him to immigrate here a decade later.

He first jumped into politics in 2006, working as a field organizer for Robert Rodriguez — a Democratic congressional candidate in California. Then Casanova worked on Barack Obama’s 2008 campaign as a voter protection volunteer during the South Carolina primary, and in the Florida general election.

Living on the Upper West Side, Casanova also worked on several city council campaigns like for Athena Moore, who ran for a central Harlem seat currently held by Councilwoman Kristin Richardson Jordan. He also worked for U.S. Rep. Sean Patrick Maloney as a field organizer on the Hudson River Valley Democrat’s 2014 campaign.

On top of all that, he was a member of Manhattan Community Board 7, and served on Community Education Council 3.

“I worked, basically, in about 12 races,” Casanova said. “On top of that, I’ve also helped other people that I know — especially at the local level — to get elected to the school board. And also, friends who were running for Congress in other parts of the country.”

In addition to politics, Casanova says he also has had a thriving private sector career. After getting his master’s degree in business administration in 2000, Casanova mostly worked with airline carriers, overseeing managing relationships with the companies’ clients and corporate partners — including some large financial institutions.

Democratic congressional representatives could’ve probably used Casanova’s negotiating skills while putting together Build Back Better, he said — which has been shelved in the U.S. Senate for the time being. In Casanova’s view, the fact House Democrats started out with a bill valued at $6 trillion that was trimmed to $2 trillion shows they were either over-promising or simply bad at negotiating.

“Either option is not a good one,” Casanova said. “And neither will happen with me. I’m not saying I’m going to always be perfect — I’m a human being. I will make mistakes. But I’ll never make a mistake that I start with $6 trillion, and I end up with $1.7 trillion.”

Because New York — like nearly every other state — is currently redistricting, it’s not clear what Bowman’s district will ultimately look like by June. A change in the demographics of the district could have dramatic implications for the outcome of the race. And it’s entirely possible Casanova could end up running against a different opponent altogether, based on what district New Rochelle ends up in.

No matter who he’s ultimately running against, what Casanova is most concerned about is making sure that government works.

“Particularly after the four years of Donald Trump, we’ve got to be the party that delivers,” he said. “The party that makes government work, the party that listens to all the different opinions and is able to create that broad coalition in Congress and is going to get things done.”