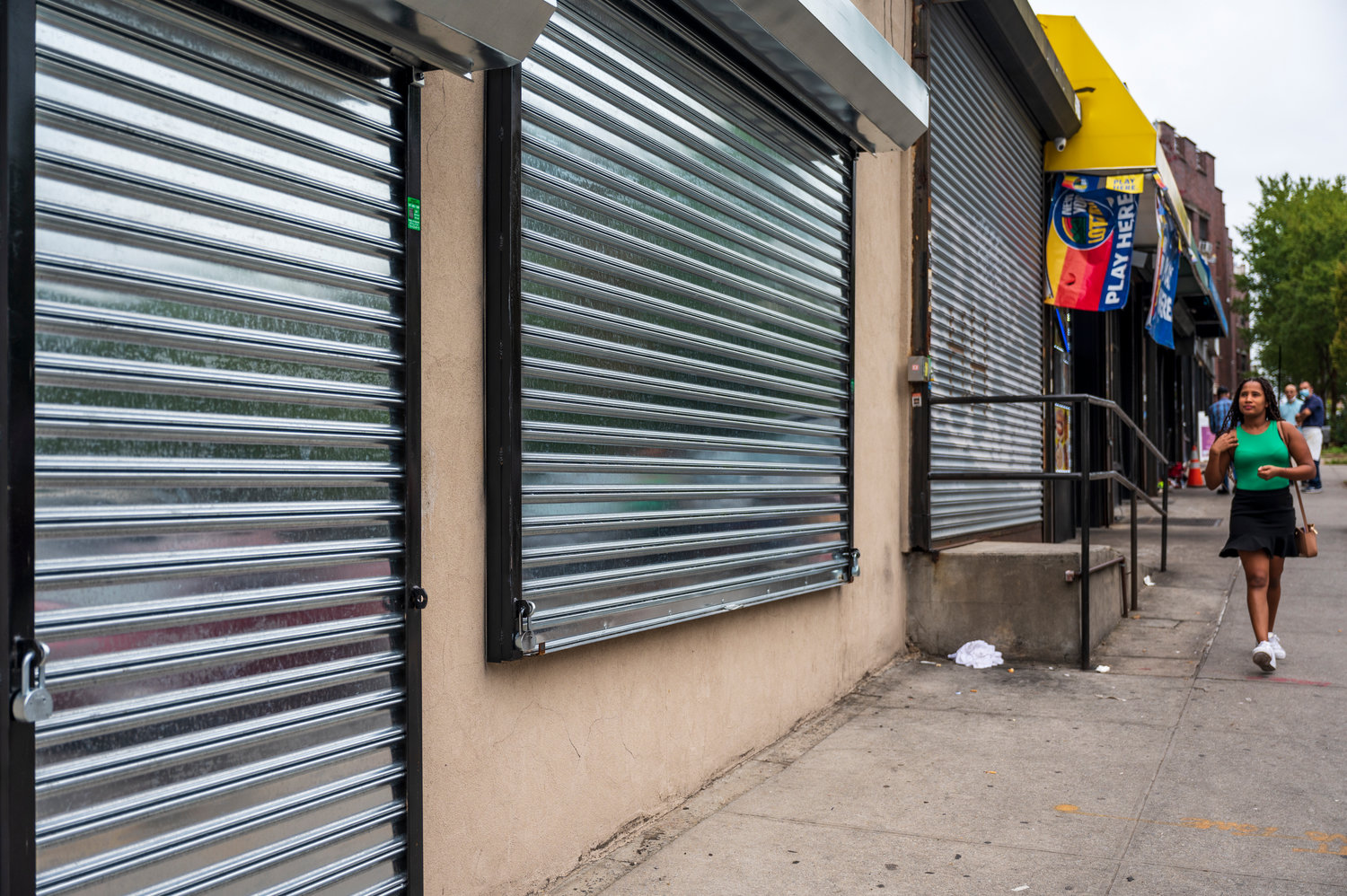 What once used to be a storefront across from Van Cortlandt Park is now expected to become a shelter for more than 100 single men beginning in 2023 at 6661 Broadway. Community Board 8 will address the proposal for the first time Oct. 13 at its health, hospitals and social services committee.
HIRAM ALEJANDRO DURÁN
Support journalism

There’s a new neighbor coming to Broadway in 2023 — and it’s not exactly who many in North Riverdale had hoped for.

Community Board 8’s health, hospitals and social services committee is set to hear a proposal from the city’s homeless services department on Wednesday that would open a shelter for 130 single men at 6661 Broadway.

And if what happened a few years ago when DHS opened 5731 Broadway is any indicator — this is expected to be a long, hard battle that could fracture a community once again between those wanting to help the less fortunate, and those who want to do it, but just not so close to home.

The proposed shelter would sit just a block south of the Westchester County line, across from Van Cortlandt Park. When opened, it will serve as an official bookend with the massive green space, complementing another shelter on Norwood’s Jerome Avenue. That shelter also caters to homeless men in a facility run by the non-profit social services group BronxWorks.

The Broadway facility would be run by the African American Planning Commission, a Brooklyn-based non-profit founded by Matthew Okebiyi that runs several housing communities already, including its Serenity House Family Residence that caters to homeless victims of domestic violence and their dependent children.

Murray isn’t too sure how serious the city is about opening a new facility in North Riverdale, however, because nothing has been filed with the buildings department so far.

“I don’t think this is a done deal yet, but I and the community board would like the residents to have a say in what’s going to happen,” Murray said. “We need to know where these single males are from.”

At the height of the coronavirus pandemic, the city moved thousands of homeless people into vacant hotels as a way to curb COVID-19 spread among the most vulnerable. While that particular program has since come to an end in light of complaints from those who lived and worked near the hotels, Murray is concerned the city is looking to rapidly build more homeless shelters, scattering them randomly across different locations.

Some of the initial complaints coming through social media is fear of mental illness among the homeless men expected to populate this new facility, as well as supposed spikes in crimes and depression of neighboring home values.

Murray himself believes the community will come to Wednesday’s meeting with a host of questions, but is optimistic many have yet to make up their mind whether they are for or against the city’s plan.

“We’ll want to know what services will be provided, how will this benefit the community, and will this change the trajectory of the community,” Murray said. “I know that the board office and the board chair (have) been getting a lot of calls as to whether or not it’s a done deal.”

The board opposed 5731 Broadway four years ago, a transitional facility designed to help families just a step away from independence to regain that with semi-permanent housing in a newly built apartment structure not far from West 238th Street.

Yet CB8’s chair, Laura Spalter, has a reputation of opposing homeless services in this part of the Bronx through her Broadway Community Alliance.

“There isn’t really a position from the board right now,” Murray said. “We’re just waiting to hear more. We’re on a fact-finding mission right now.”

Spalter’s husband Rob, however, already has posted calls to action about the proposed shelter on the alliance’s social media pages, including the Sept. 24 letter sent to the community board by Erin Drinkwater of the city’s social services department.

Murray says his meeting, however, is about education, and ensuring the neighborhood is fully involved in the decision-making process. That could mean not just committee meetings involving health and hospitals, but also Charles Moerdler’s powerful land use committee, which was unsuccessful in derailing 5731 Broadway.

“The main thing is, if this is going to be a done deal, then what my committee would probably do as well as the land use committee is that we may try to have a public hearing,” Murray said. “We’d want to allow the residents and business (owners) to come and speak about how it would affect them, and how do they feel about the shelter being there.

“The outcome of that public hearing will determine the case we’re going to make. This can’t be something that’s determined over the course of just a meeting or two.”

Another key part of the exploratory process is learning more about AAPCI, which is in line to run the facility.

“We don’t know much about this company,” Murray said. “We’re researching what services they provide. We know that they seem to be doing a good job when it comes down to homeless services.”

Other questions Murray has include why this particular neighborhood was chosen. He’s also curious if there have been any studies determining the impact the shelter’s placement may have.

The property was sold to a Rockland County limited liability corporation in 2016 for $1.47 million. Another LLC with the same Suffern post office box also picked up a property just around the corner at around the same time at 205 W. 262nd St., according to city property records.

The address also is used by Black Brown Grey & Co., according to New York’s state department, which lists Joshua West as its chief executive. West appears to be a shareholder of 36 Marble Hill Ave., a four-story apartment building off West 225th Street.

City officials told the community board the shelter’s placement is in-line with Mayor Bill de Blasio’s borough-by borough initiative, which looks to hold neighborhoods accountable as sites for homeless shelters and transitional homes.

But then again, de Blasio is only mayor for a few more months. And Murray believes this initiative could lose its teeth with a new administration, likely under the leadership of Brooklyn borough president Eric Adams.

“Now more than ever we need every community to come together to address homelessness,” said Ian Martin, a spokesman for the city’s social services department. “This high-quality, borough-based facility will be the first shelter of its kind in this community district, offering 130 New Yorkers experiencing homelessness the opportunity to get back on their feet safely and closer to their anchors of life in these unprecedented times.”

Murray has invited both AACPI and city officials to his Oct. 13 meeting, slated to start at 7 p.m., through the Zoom online videoconferencing app.