Camelia Tepelus calls for change to bylaws, but the full board tables it 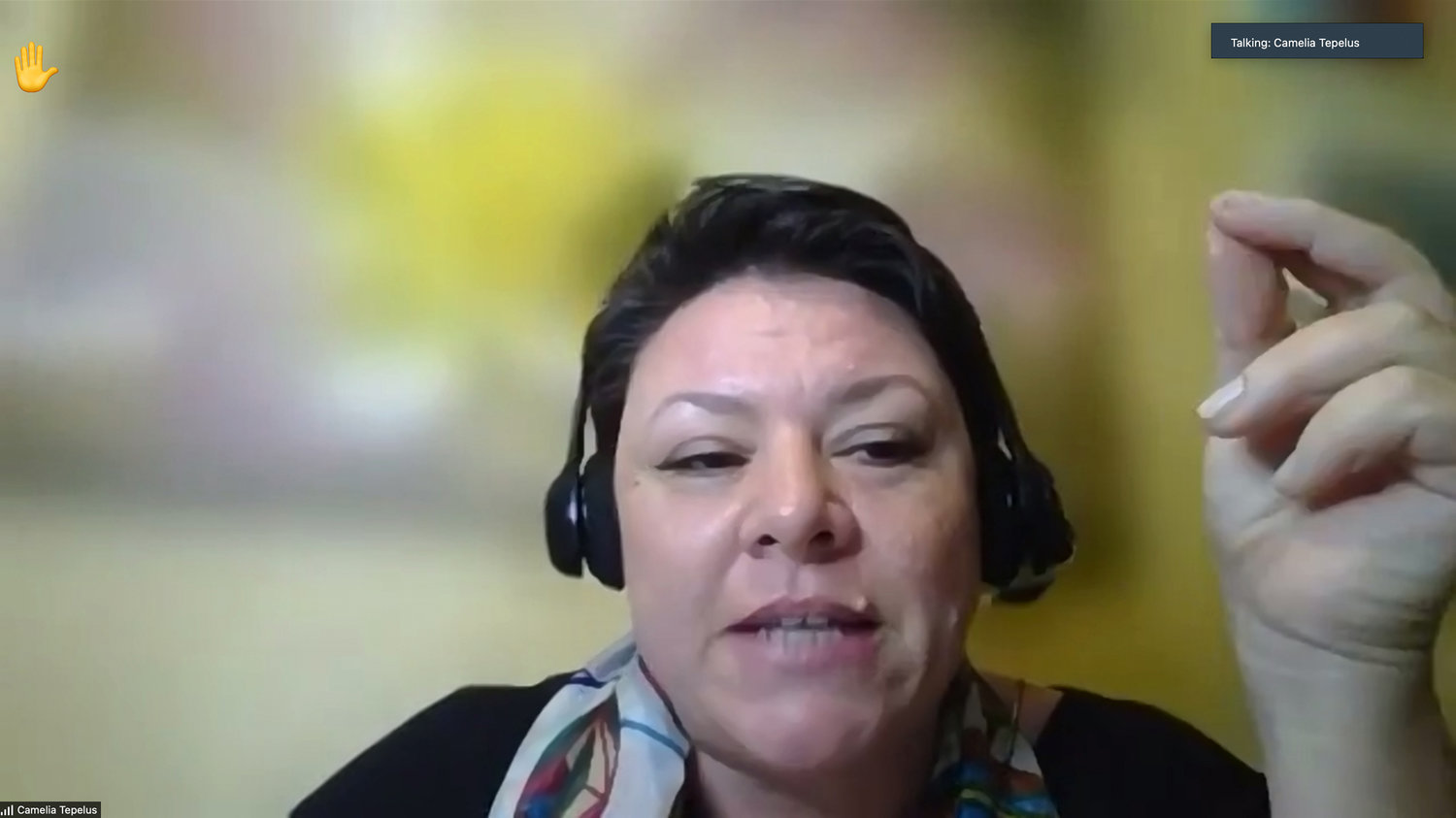 Camelia Tepelus tried to get Community Board 8 to vote on a resolution that would limit the power chairs have over their fellow board members in a meeting last Thursday.
Hiram Alejandro Durán
A little CB history

There are 59 community boards in New York City whose volunteer members are appointed by the borough presidents.

After becoming New York City’s mayor, Wagner helped usher in the concept of “community planning boards” as part of the 1963 city charter, which created individual community districts in every borough — the Bronx, Manhattan, Brooklyn, Queens and Staten Island.

These “Little City Halls” have had a formal advisory role in land use decisions since 1975 as part of the Uniform Land Use Review Procedure, and their responsibilities in the environmental review process were further enhanced in 1989.

An ongoing dispute between two Community Board 8 members has evolved into a larger debate over whether one of its bylaws could lead to discriminatory practices.

In a vote Thursday CB8 tabled Camelia Tepelus’ bylaws amendment and returned it to the law, rules, and ethics committee, which will take it up beginning Oct. 31. The amendment could affect the composition of the board’s 18 or so committees, whose volunteer members can be limited at the discretion of elected chairs.

Tepelus wants to roll back that discretionary power and put in place a randomized process to decide who will serve when a committee is oversubscribed. According to the board’s current bylaws, the committee chair — in consultation with the head of CB8 — has the authority to select both the size of the committee and its membership.

Controversy began stirring when Tepelus, a CB8 board member since 2019, tried to sign up for the land use committee but was rejected by its chair, Charles Moerdler. The committee plays an important advisory role in deciding land use and zoning matters in the community district.

Moerdler “has chosen not to have her there. He has redesigned the committee. He’s established many working groups,” said Martin Wolpoff, who heads the law, rules, and ethics committee, at an October meeting. “And he’s decided with whom he wishes to work.”

Tepelus, for her part, was alarmed, and wasn’t going to let the issue slide. Last week she introduced an amendment to the full board for a vote, bypassing the law, rules, and ethics committee and executive committee that have reviewed all bylaws changes so far in CB8’s history.

The amendment calls for “an equitable, objective, transparent, and randomized process” — in other words, a lottery — to determine committee membership when a chair wishes to cap its size.

Tepelus declined to comment for this story in adherence with CB8’s rule against talking to the media. In meetings this fall, she warned the board that without a change to the bylaws, it could be leaving itself vulnerable to future legal troubles.

“If a person was explicitly singled out to be excluded from a committee where that person wanted to participate with volunteering efforts and equal rights of participation, a complaint could be submitted. A complaint related to discrimination,” she told the law, rules and ethics committee in September.

“I don’t want to submit a complaint for discrimination for being explicitly singled out from joining a committee,” she continued. “But it is something that should be addressed. It is a matter of equity.”

The land use committee has meanwhile taken up some of CB8’s most pressing issues this fall, hosting discussions with Tishman Speyer’s Gary Rodney and Bronx city planning director Ted Weinstein.

In an email to The Riverdale Press, Moerdler said that his committee has been working on projects related to affordable housing that require collaboration.

“To achieve these (perhaps too aspirational) goals the committee must work collegially and effectively. That has thus far been the result of collegial and truly contributive effort by its current members,” he wrote.

While Moerdler made no mention of any animosity towards Tepelus, CB8 chair Laura Spalter said there has been “tremendous friction” between the two for quite some time.

After losing the full board’s approval last week, Tepelus’ amendment will now churn through the committees before it has a chance to reappear. She first presented the resolution to the law, rules and ethics committee in September, and it was also discussed in the executive committee meeting Oct. 6 before she brought it to the full board meeting on Oct. 13. It was then tabled and sent back to committee for further review.

“I am a little bit concerned about a board member coming to this board, or coming to a committee, with a threat to claim discrimination,” ethics committee chair Wolpoff said. “For all those reasons and more I think this should follow the board and bylaws process. An amendment to the bylaws should and must go through the LRE committee.”

Aside from a few abstentions, Tepelus was the only board member to vote against tabling her resolution.

“I do feel like we are a body of the city of New York and this discretion comes across in this day and age as bias,” Tepelus said right before the vote was taken. “That’s not equitable and fair and transparent.”