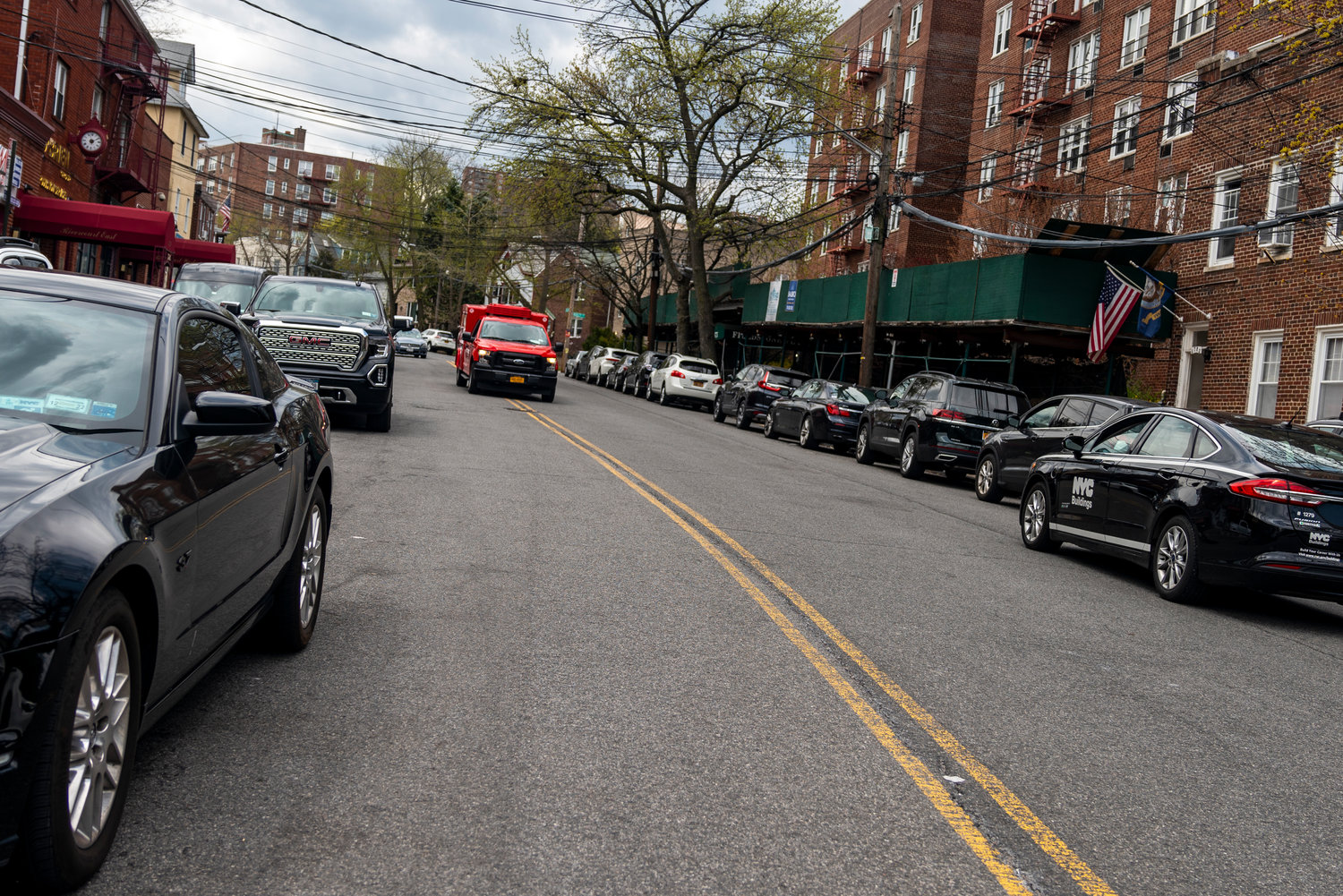 The question addressed to Community Board 8’s traffic and transportation committee: Should the neighborhood prioritize bicycle lanes or double-parking? And while the committee established double-parking was still illegal, bike riders didn’t fare well, as the committee struck down bike lanes on Mosholu Avenue.
HIRAM ALEJANDRO DURÃN 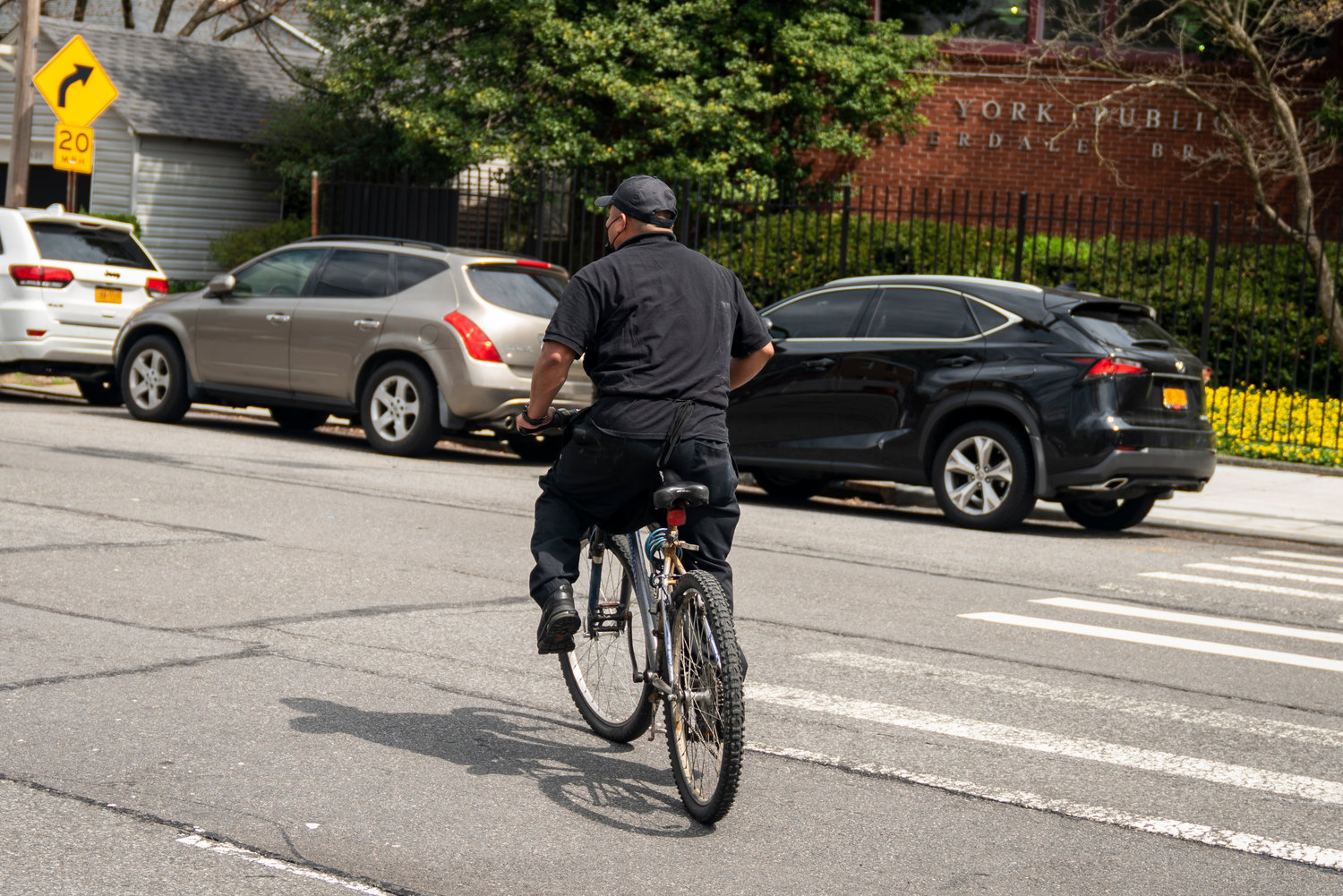 The proposal to add bicycle lanes to Mosholu Avenue was part of the city transportation department’s plan to slow traffic along the drag. However, some neighbors were less receptive to the idea — including dozens of Mosholu businesses claiming bicycle lanes would disrupt their already fraught clientele. Only two members of Community Board 8’s traffic and transportation committee ultimately voted in favor of the bike lanes.
HIRAM ALEJANDRO DURAN
Previous Next
By ROSE BRENNAN

As the warmer months approach, more people are turning to outdoor activities. Among them? Bicyclists. But if any of them are looking for designated space along streets like Mosholu Avenue, they may need to keep looking.

Even the mention of bicycle lanes can bring the crowds out to a Community Board 8 traffic and transportation committee meeting, as experienced just recently over Independence Avenue, and just a few years ago along the Van Cortlandt Park stretch of Broadway.

This time, the ire was pointed at a DOT proposal to add bike lanes to Mosholu Avenue. Yet, if the city’s transportation department decides to throw some additional paint on Mosholu to encourage cyclists, it won’t be with the blessing of CB8.

The lanes were part and parcel of a DOT proposal to cut down speeding on Mosholu through the heart of North Riverdale. It’s not a new idea — the city first considered it in 2019 — but was shelved thanks to the coronavirus pandemic, according to Bronx borough DOT commissioner Nivardo Lopez.

But now with hopes that COVID-19 is becoming more of our past than our present, the transportation department returned to the community board, hoping to get its support for its traffic plans.

The proposed bike lanes, however, proved to be too controversial, especially among the businesses along Mosholu — many of whom signed a petition opposing bike lanes, according to Broadway Community Alliance spokeswoman Tara McMaster. The concern is that business — already on thin ice because of the pandemic — would further suffer if bike lanes were installed, as it could clog up the streets, making it more difficult for vehicles to double-park.

“Our restaurants are all more dependent on takeout and delivery,” McMaster said. “Narrowing the street will cause dangerous congestion, as parking is already very limited. And suppliers, delivery cars and customers picking up food already have difficulty accessing the businesses.”

The petition by Mosholu’s business owners proved pivotal to traffic committee chair Dan Padernacht, who joined the majority in voting down the bike lanes.

“What I’ve heard are 37 businesses saying no,” Padernacht said. “We’re coming out of a pandemic where all of those businesses have been hurting for a year and a half right now. So based on the businesses’ extreme disapproval of this, I’m not going to go in support of this bike lane.”

One of those concerns was the ability for customers and delivery drivers to double-park for quick pick-ups and drop-offs, claiming bike lanes could disrupt that practice. And while double-parking remains illegal, it doesn’t seem to affect what already is a commonplace practice not only in this part of the Bronx, but the city as a whole.

The DOT’s ultimate goal appeared to be traffic calming. Unlike the parking-protected bike lanes along Broadway near the city’s borders, the Mosholu bike lanes would be nothing more than sharrows — paint on the street for an area cars and bicycles already share. But some worried bike lanes would slow traffic too much.

“It is already impossible to get up the block as it is,” said Christine Card, whose children attend school in the area. “To put bike lanes in when it’s already an utterly bottlenecked ride almost the entire way to school every morning is just going to make it a bigger nightmare than it already is.”

But not everyone was against the proposal. In fact, their complaints were more that these lanes were not built between parked cars and the sidewalk, the kind of “protection” Lopez said was impossible on a stretch like Mosholu.

Rebecca Lish told the committee bicycle-specific infrastructure was not only needed along Mosholu, but in the community as a whole.

“Our neighborhood is very poorly served in terms of bike access,” Lish said. “We keep making excuses that we can’t do this (and) we can’t do that because the cars double-park. But the cars should not be double-parked. The rights of people who choose to commute by bicycle should not be inhibited by abuse of the law by people who choose to drive cars.”

While Lish, Travis and Gellman may not have been on the winning side of the CB8 vote, they could still get their bike lanes. The community board’s decisions are merely advisory, and DOT is not bound by it in any way. In fact, the Broadway protected bike lanes were built despite opposition from Padernacht and the traffic committee in 2018.

But Padernacht’s issues weren’t just limited to bike lanes. He also pointed out the plan’s seeming lack of pedestrian crossings.

Patricia Smith, who described herself as a disabled senior citizen, said crossing Mosholu could be treacherous for people like her. Moreover, there wasn’t a place to legally cross anywhere between Fieldston Road and Broadway.

“For me to legally cross the street, I have to walk an extra … quarter of a mile up to Fieldston. Uphill,” Smith said. “I find it very, very interesting that in the Department of Transportation’s presentation, in almost every picture that they used to illustrate Mosholu Avenue, there was a pedestrian illegally crossing. If that’s not a tacit acknowledgement that this is a problem, I don’t know what is.”

But pedestrians are foremost on DOT’s mind, Lopez said. The agency already is looking into improving that infrastructure along Mosholu, especially where it meets Post Road and Liebig and Huxley avenues.