JUST TRYING TO SLOW IT DOWN 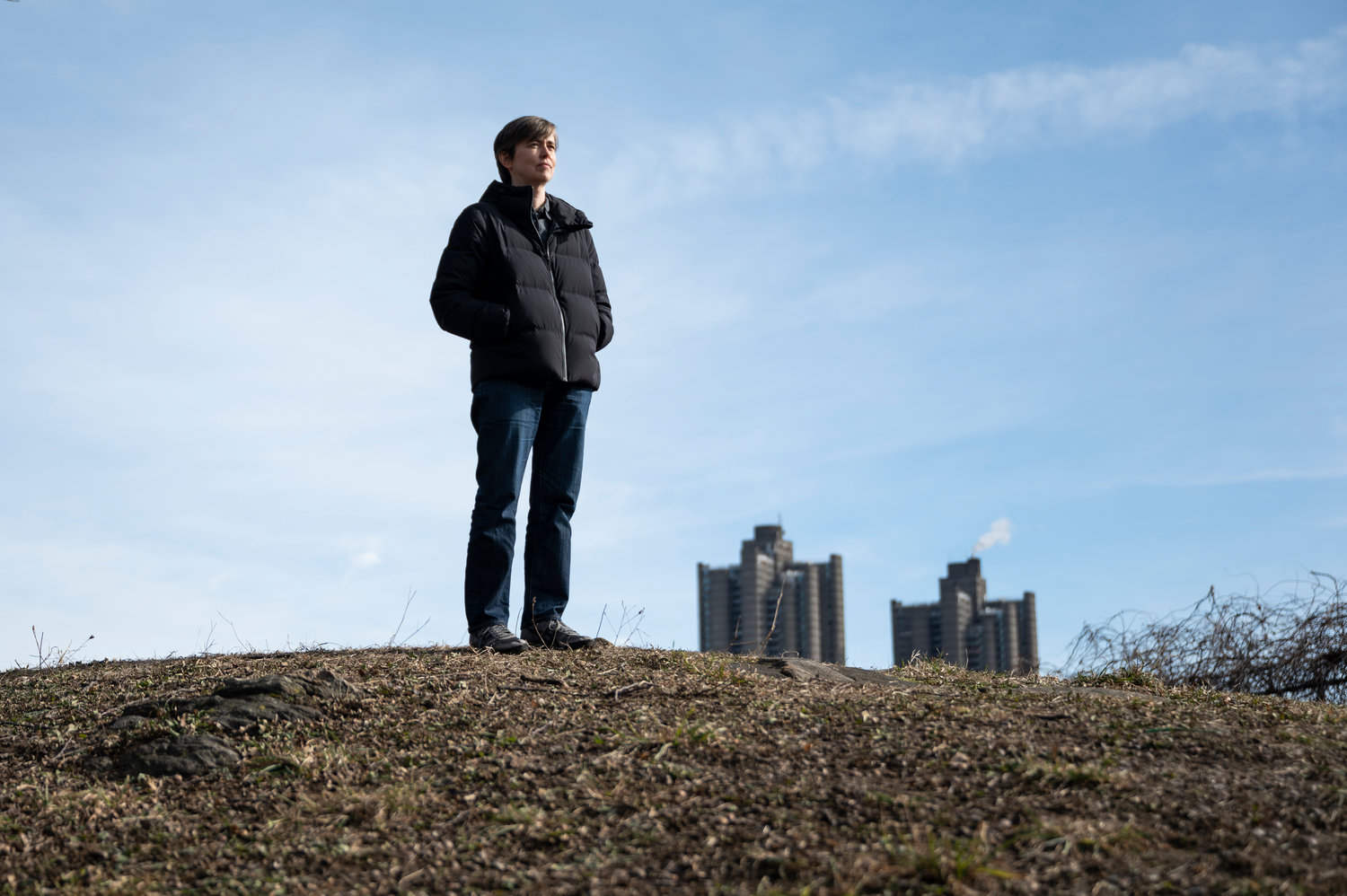 Deb Travis has spent the past several months leading a working group brainstorming ideas that could possibly solve reckless driving along the Independence Avenue corridor. While only suggestions, some of the ideas — like installing bicycle lanes to narrow the street — proved less than popular at a Community Board 8 traffic and transportation committee meeting last week.
HIRAM ALEJANDRO DURÁN 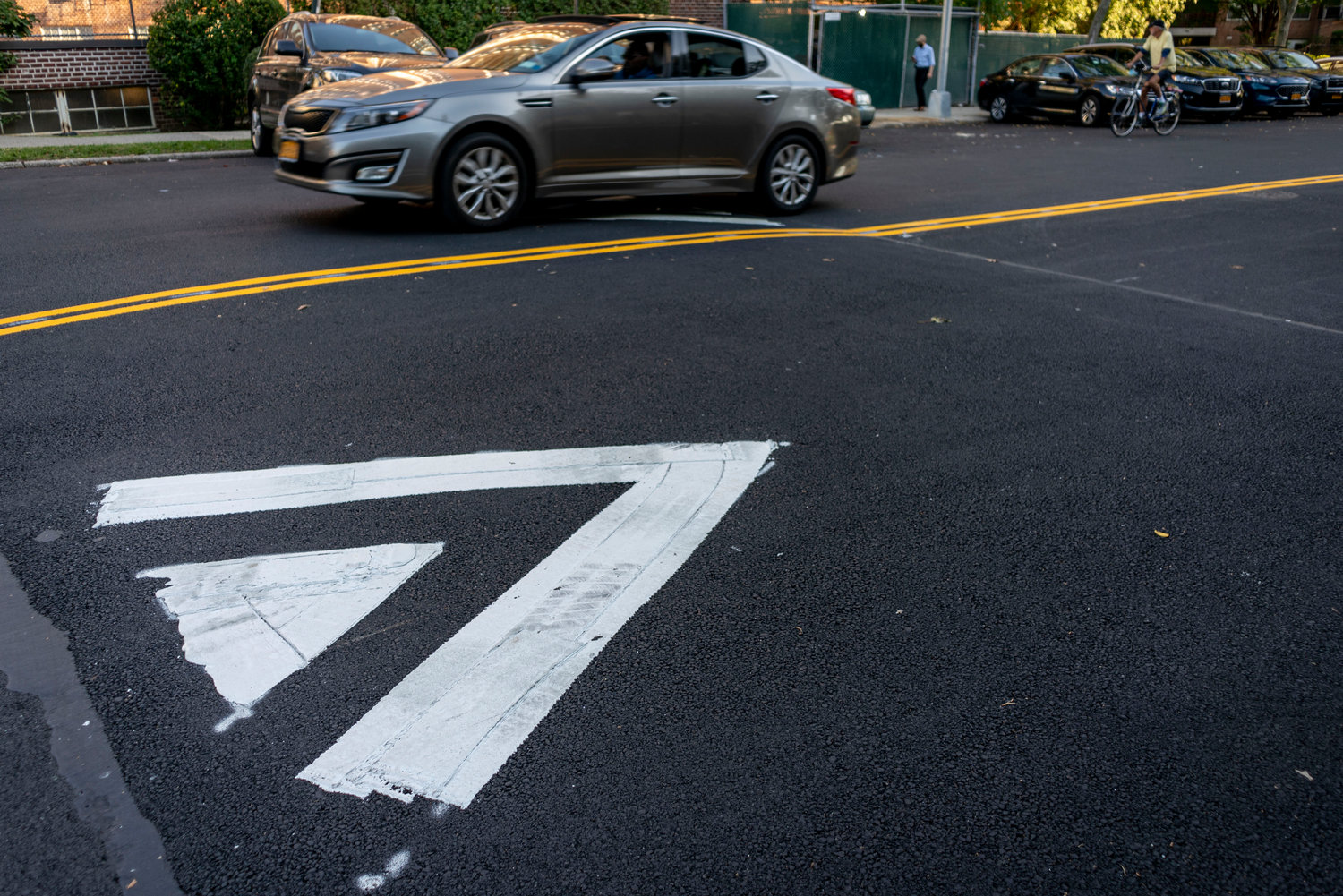 Independence Avenue already is home to new traffic-control features like speed bumps that aim to cut down on reckless driving on the street — unsuccessfully, according to some neighbors. A working group of Community Board 8’s traffic and transportation committee made further suggestions on how to calm speeding, although some neighbors aren’t on board with a few preliminary ideas like street narrowing.
HIRAM ALEJANDRO DURÁN/ File 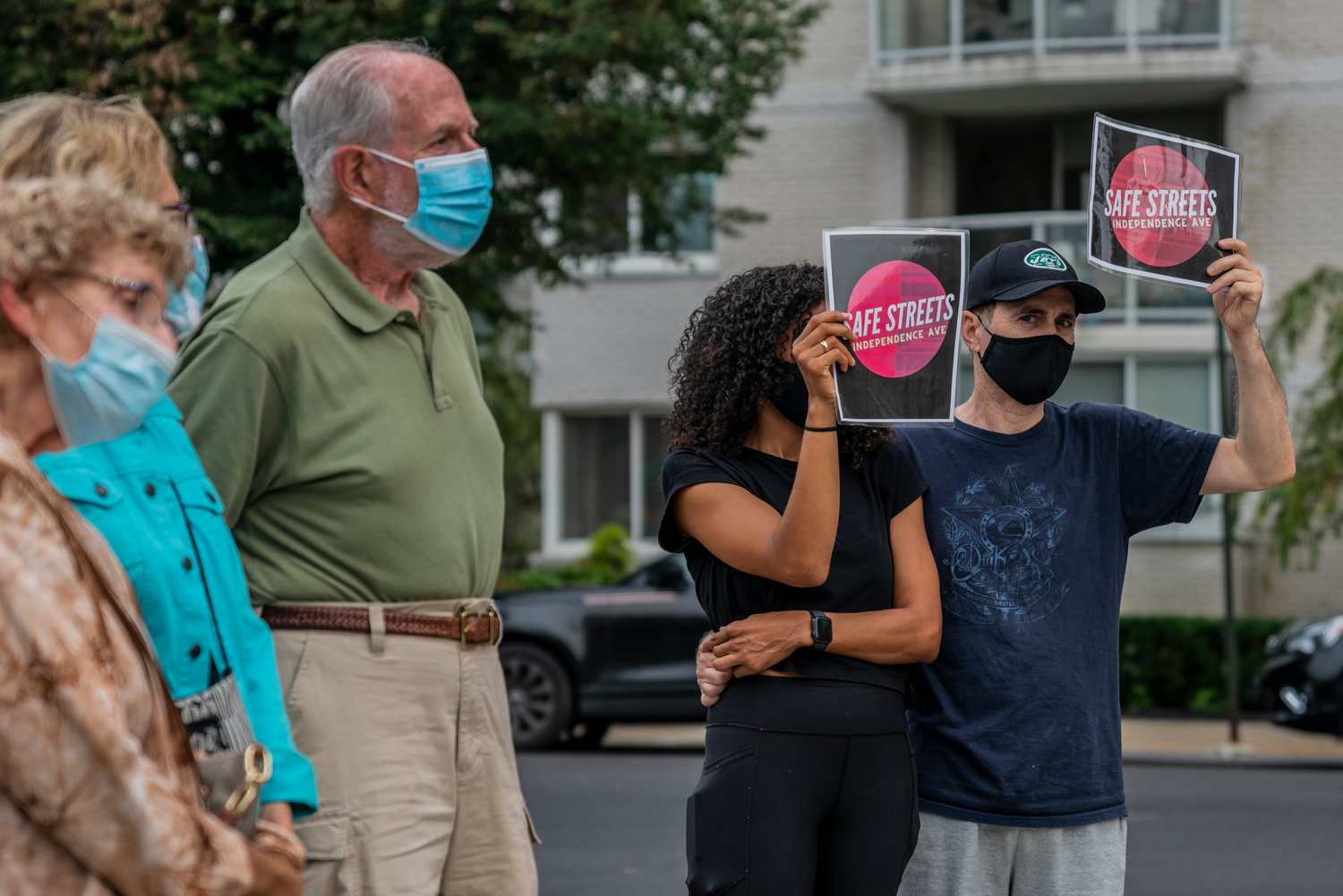 Many efforts have been made to draw attention to reckless driving along Independence Avenue, including a ‘safe streets’ rally a few months ago. But some of the preliminary ideas to improve the street and combat reckless driving are more popular than others.
HIRAM ALEJANDRO DURÁN/ File 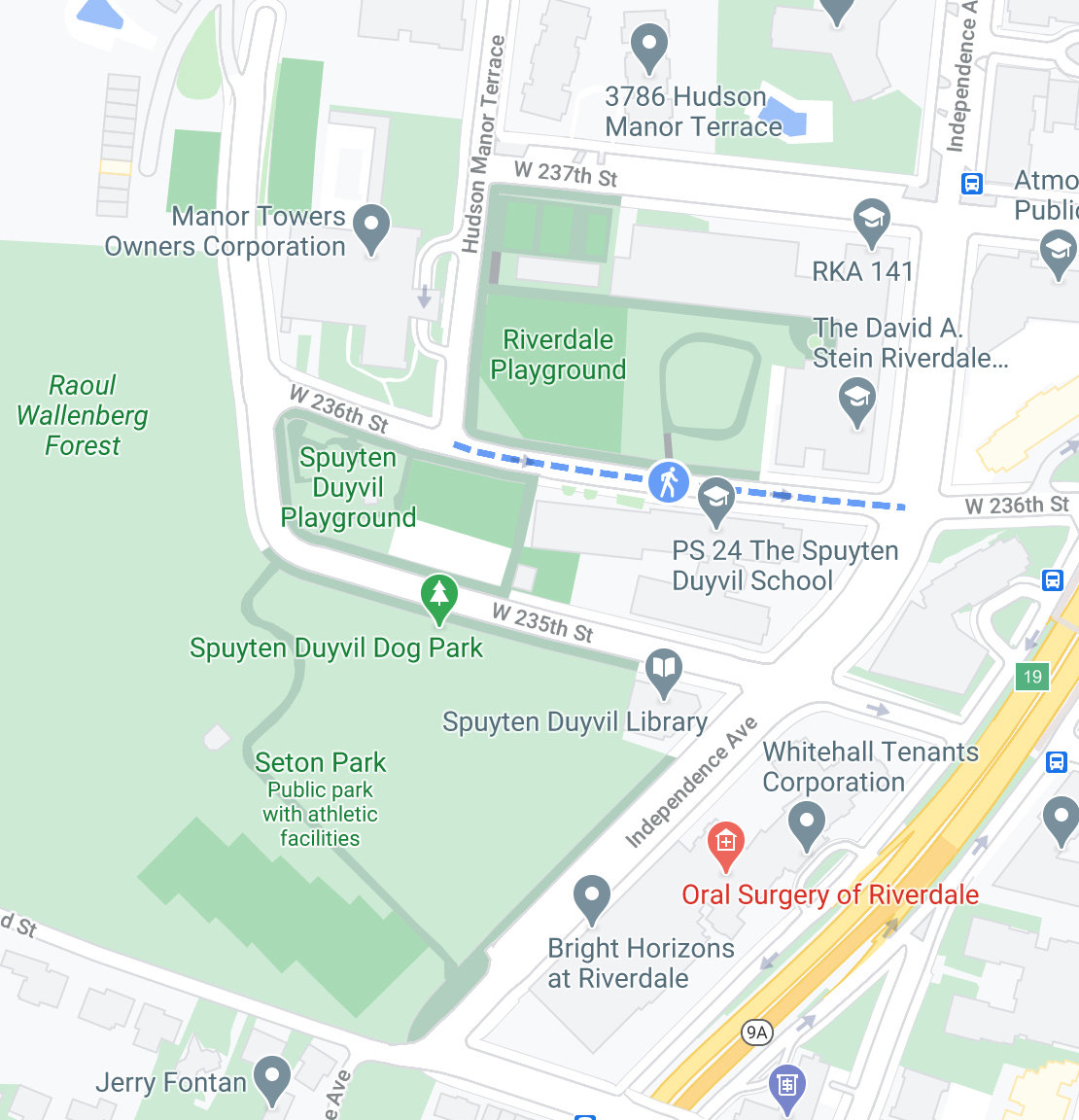 Along Independence Avenue — a hotspot for reckless driving — are schools, houses of worship, a park, and a library. Some in the community feel an idea to narrow the street and install bicycle lanes would cause a traffic nightmare, should the city’s transportation department move forward with such a currently preliminary idea.
Courtesy of Google
Previous Next
By ROSE BRENNAN

A community board meeting probably isn’t the hottest place to be on a Thursday evening. But when there’s a possibility something might impact parking, it’s an entirely different story.

More than 200 people initially attended this month’s Community Board 8 traffic and transportation committee meeting, although that number gradually dwindled over its four-hour run time. Their input was sought on proposed design changes in and around the intersection of Independence Avenue and West 232nd Street, where there have been complaints aplenty about reckless driving.

The proposals were initial brainstorming ideas developed by a working group led by committee vice chair Deb Travis. Among the thoughts offered were parking-protected bicycle lanes to narrow the street, converting West 235th Street into a westbound one-way while adding parking there, improving crosswalks, and installing a traffic signal at West 237th Street.

Some of the working group’s ideas were more popular than others. For instance, those who attended the meeting were largely supportive of improving and installing Americans with Disabilities Act-accessible crosswalks and ramps where needed along the avenue — although Bronx transportation department commissioner Nivardo Lopez said those would be coming no matter what the community board ultimately proposed.

Becca Lish, one of the neighbors attending the meeting, believed installing such ramps was an easy layup. For her, that installation should be slated ahead of many of the other concerns raised later in the meeting.

“I hope that we will always prioritize accessibility over parking,” Lish said. “It seems to me that making our city and neighborhoods safe for people who are visually impaired or otherwise in need of mobility assistance or any other accommodation, that we will comply with federal law rather than deferring to the dominance of desire for parking.”

Those attending also were largely supportive of installing leading pedestrian intervals — a signal to cross the street that would occur seven to 10 seconds ahead of a traffic signal turning green. These intervals already exist at the West 235th and West 236th Street intersections, Travis said, and would only need to be implemented at West 239th Street and — if the community supported the idea — at West 237th.

But the proposed traffic signal at West 237th was a bit more controversial than the first two suggested changes. The community seemed to agree something needed to be installed at the intersection, but there was some debate over just what it should be.

Some supported the original idea of a traffic signal, believing it was the easiest and most effective solution to make the intersection safer. Others, however, felt reckless drivers could easily ignore the lights, and something that changed the actual traffic patterns — like a roundabout— would be a better idea.

Jessica Haller, who does not live in the affected area, supported building a roundabout, believing it would be a multifaceted solution to the several problems the avenue faces.

“Not only is the roundabout going to help with speeding down Independence Avenue and donuts, it’s also more efficient in terms of emissions (because) cars don’t have to come to a complete stop,” said Haller, who is running to replace Andrew Cohen on the city council. “The roundabout is safer, better for emissions, (and) will stop traffic.”

Others felt navigating a roundabout would be confusing, not to mention potentially dangerous for pedestrians. Committee vice chair Ed Green also worried about the logistics, and was more supportive of installing a traffic signal.

“The only thing that one person raised that’s a concern for me would be the possibility of it causing some type of backup in traffic coming from another direction,” Green said. “I don’t know the specifics of that, if that’s correct. But that should be explored.”

The biggest controversy at the meeting, however, surrounded the suggestion to install bike lanes along the avenue in an attempt to narrow the street and potentially make it less appealing to speeders. After some neighbors like Whitehall Tenants Corp., chair Jeffrey Moerdler spent days before the meeting campaigning against bike lanes, community board chair Laura Spalter revealed the board received more than 100 letters opposing bike lanes, with only a handful supporting it.

Moerdler believed implementing bike lanes was “well-intentioned, but the wrong solution to the problem,” especially when high-traffic areas like schools and synagogues are located along the avenue.

“Bike lanes are a great thing, but Independence Avenue is the wrong place for it, and narrowing Independence Avenue is a horrible idea,” Moerdler said. “Imagine 10 buses parked in front of the junior high school, picking up and dropping off kids. When you now have two narrow lanes, you’re forcing all the traffic into one lane. You’re going to create a gridlock for five blocks in every direction.”

But what about the parking?

Others attending the meeting also were concerned the proposed bike lanes would eliminate parking along the main street, although the working group suggested a way to keep parking would be by moving lost spaces to West 235th. But some even opposed that, citing safety concerns parking on an isolated street.

“When I first moved to Riverdale, parking by the Whitehall and (West 235th) was plenty available, and then my car got broken into every single time I parked there,” Joyce Moran said. “And it wasn’t a great car to get broken into.”

While the brainstorming ideas offered by the working group troubled some at the meeting, others were more unsettled by the rhetoric they heard from their own neighbors. Armenoush Aslanian-Persico believed bike lanes would be great to add anywhere in the community, and felt the crowd gathered by Moerdler didn’t accurately represent the sentiments of others who live and work in the area.

Streetsblog NYC, an advocacy site for pedestrians and mass transit, reported that 26 cyclists were killed in the city last year — eight of them in the Bronx. Many of those cyclists, they said, were low-wage “essential” workers trying to keep society going in the midst of the coronavirus pandemic.

Ultimately, no decisions were made — nor were any expected, since this was simply discussion of a report from a working group. Any decisions ultimately made by the traffic committee would then have to go through the full community board before any recommendations were made to the city’s transportation department.

Even once that’s done, the DOT is not bound by the advisory opinion of the community board in any way.

The traffic committee will continue taking a hard look at what can be done to help improve the Independence Avenue area, chair Dan Padernacht said, emphasizing that voices from those who attended last week’s meeting were heard.