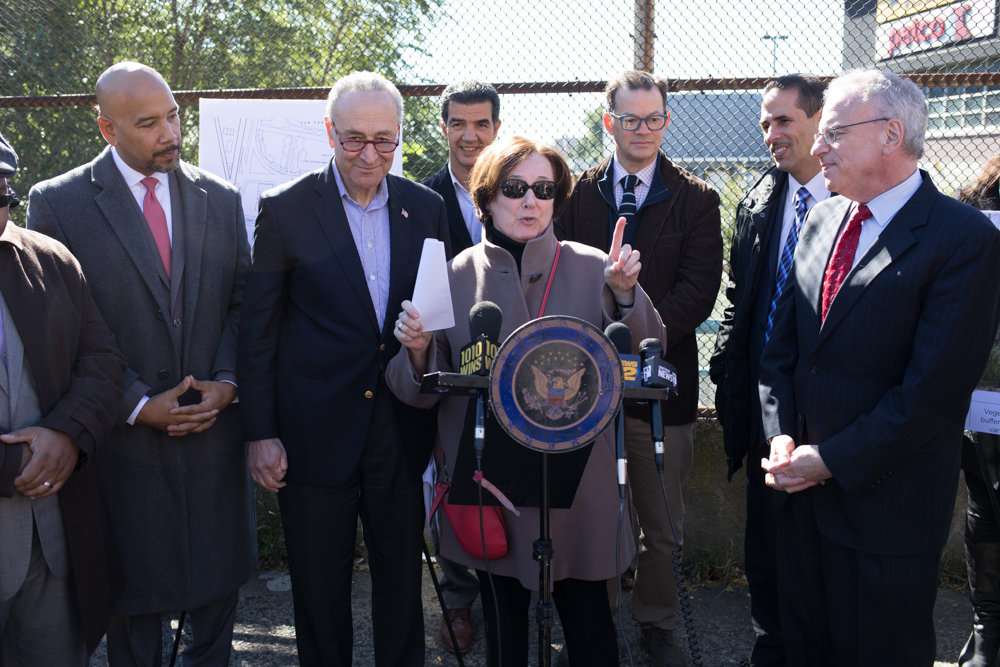 Community Board 8 chair Rosemary Ginty speaks at a press conference about a CSX Corp.-owned strip of land last year. CB8 could join the rest of the community boards if it changes its bylaws to shrink its land use committee.
JULIUS CONSTANTINE MOTAL / File 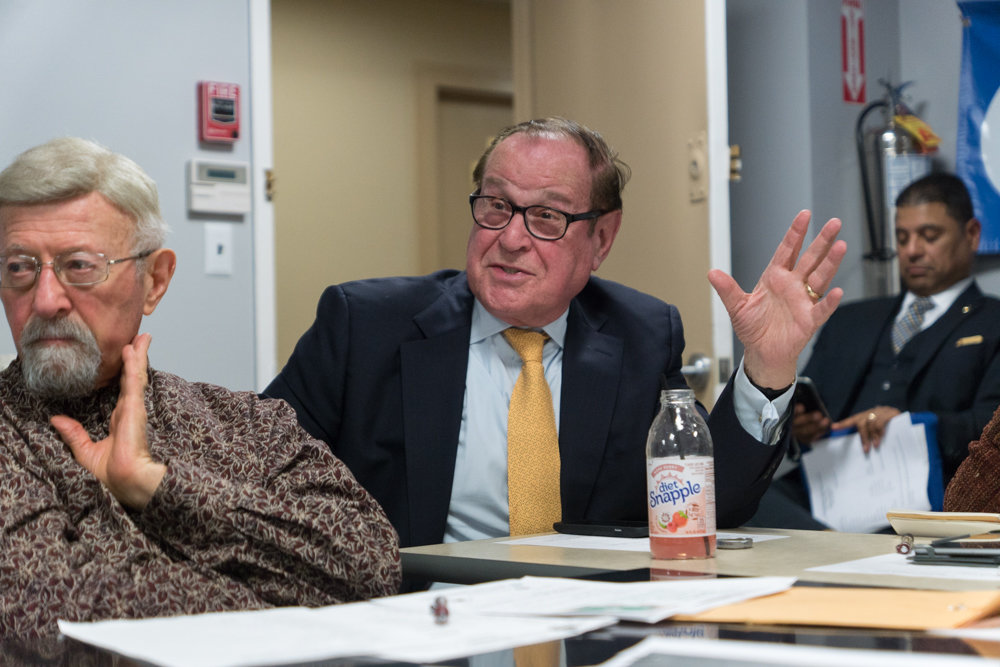 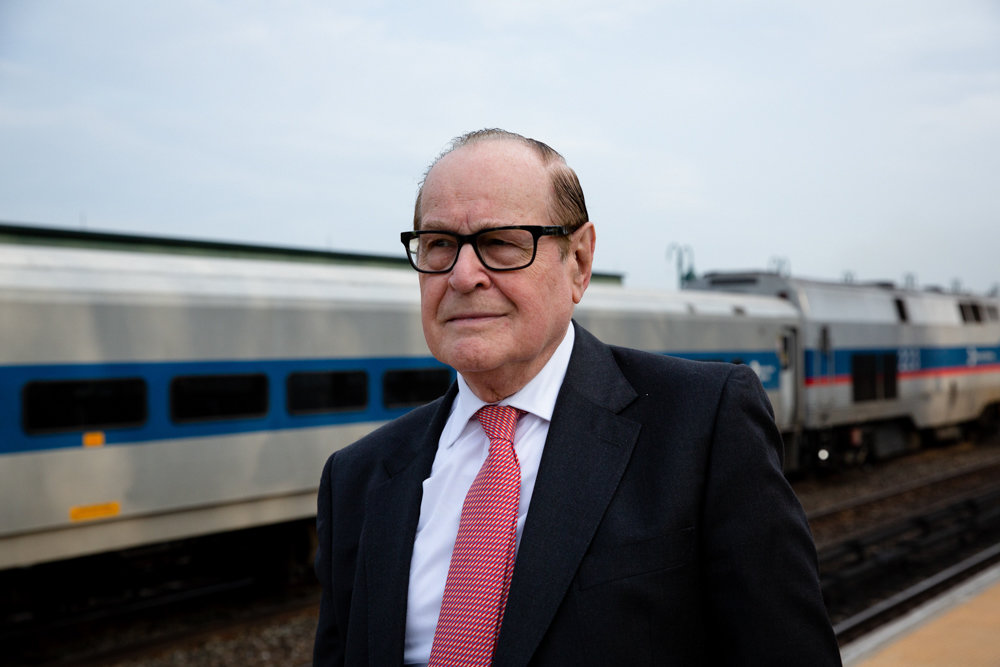 Community Board 8 land use chair Charles Moerdler has mixed feelings about shrinking the land use committee. He feels that broader participation is a good thing, and that having it remain a ‘committee of the whole’ — thus involving the whole board — is more inclusive.
EIAN KANTOR / File 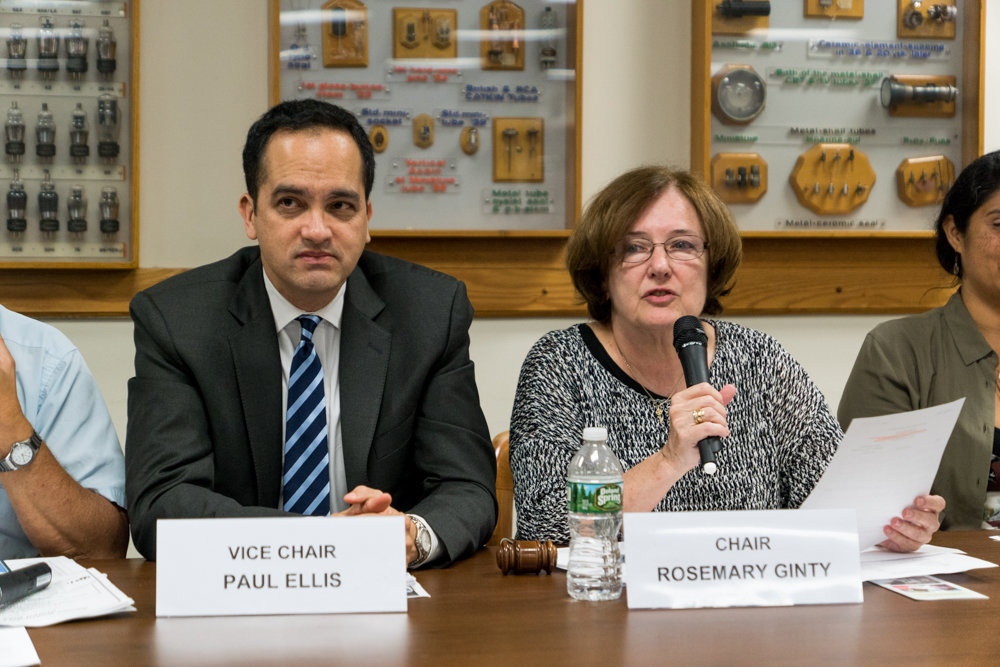 Community Board 8 chair Rosemary Ginty speaks at a meeting in 2017. CB8 could join the rest of the community boards if it changes its bylaws to transform its land use committee from a committee of the whole to a standing committee.
JULIUS CONSTANTINE MOTAL / File
Previous Next
By ZAK KOSTRO

Community Board 8’s land use committee could finally catch up to most others throughout the rest of the city — in a fundamental way.

That’s because the board is considering a metamorphosis from a committee of the whole — meaning everyone on CB8 is on it — to a standing committee, which will shrink it to the size of other community board committees.

“My understanding is they’re the only board in the Bronx that still does that,” that is operate as a “committee of the whole,” said John DeSio, spokesman for borough president Ruben Diaz Jr.

“Honestly — and not necessarily representing (Diaz’s) office, but as somebody who covered the neighborhood,” as a reporter for the now seemingly defunct Riverdale Review, “I feel like it’s a way to make everybody included on what tends to be the most contentious issue that comes before Community Board 8,” DeSio said, referring to extra sticky land use and zoning questions.

“So if your goal is inclusivity, that would explain why you’d have a committee of the whole. Whether it works as a matter of administration, I can’t speak to that.”

The system has worked well for CB8 in the past, primarily because the board itself doesn’t typically meet over summer months — except as the land use committee, since the membership is the same. But if that all changes, it could mean something different come this summer.

“It’s taken us months to ferret it out, and decide what we wanted to do as a committee,” CB8 law, rules and ethics chair Martin Wolpoff said at a recent executive committee meeting.

“Who is the land use committee?” Wolpoff asked. “If it’s everyone, then getting a quorum is a major effort. If it’s a committee, who’s on the committee? Beyond that, ‘If I don’t show up to this committee, am I being penalized because I’m a no-show?’”

Community board members are typically required to maintain attendance at committee meetings in order to retain their spot on the board. Land use was a committee everyone was required to attend on top of their other committees, and many would choose simply not to show up.

“In theory, every member of the board, a committee of the whole, is a member of the land use committee,” Wolpoff added. But, “some people were upset. ‘I don’t want to be part of the committee. Why do I have to be part (of it)? It doesn’t count as one of my two (committees).’ This seeks to resolve that.”

As committee chairman Charles Moerdler sees it, the land use transformation would be significant, if not quite seismic.

“It allows a smaller quorum,” Moerdler — who was not at the recent executive committee meeting — later told The Riverdale Press.

Operating as a committee of the entire board, half of all board members, plus one, are required for a quorum. Whereas, if it’s a standing committee, only half of the committee membership, plus one, is required — hence a significantly smaller number.

But potential issues could arise, like if a thorny land use question cropped up.

“There, you’re going to wind up with a situation of probably having to have two separate meetings,” Moerdler said. “One of the whole committee, and then one of the whole board,” in order to give various people, organizations or groups involved a required public hearing.

“In addition, the question then becomes whether people can vote on a ULURP hearing if they are not a member of the committee,” Moerdler added, referring to uniform land use review procedure, a public review process associated with land use and zoning laws.

“That’s an area that I think is a problem.”

With the committee operating as a committee of the whole, it can meet during the summer — when the full board typically doesn’t hold its regular monthly meetings — and tackle issues affecting the entire board.

“If the full board doesn’t want the committee to meet in the summer, but only have the full board meet, that’s up to them,” Moerdler said, because special authorization from the full board is required to hold such a meeting that wouldn’t ordinarily occur in July or August.

“It’s a mixed bag,” Moerdler added. “It has some advantages, some disadvantages, and it’s up to the board what they want to do.”

But it’s not a change Moerdler feels terribly strongly about, “because if people want to restrict the number of people who participate,” that’s really the board’s decision.

It’s something that could very well come to bear this summer amidst a scheduled public hearing on proposed changes to the city’s Special Natural Area District, which has met some considerable opposition from CB8.

“The city is going to certify SNAD in May,” he said. “That means we have 60 days to vote.” It could even carry over into July, potentially prompting a separate emergency board meeting, and vote.

“That means we’ll have three meetings on the same issue,” Moerdler said. “It’ll go on in the same way that it did with the issue of Hebrew Home,” referring to the protracted polemics roiling the community surrounding Hebrew Home at Riverdale’s push to add a continuing care retirement community to its North Riverdale campus.

The full board was expected to vote at their monthly meeting April 9 to shrink the land use committee — a vote that did not take place by press time. If it passes, it would still require a second vote, tentatively scheduled for May 14.

If and when the transformation is complete, it could definitively affect how the board — and the land use committee — operate. Still, it probably wouldn’t be anything cataclysmic.

“Other boards do it,” DeSio, the borough president’s spokesman said, “and the world hasn’t been destroyed.”

“Will this bring world peace? No,” he said. “But the issue is having a quorum. When you don’t know who your membership is, you can’t have a quorum. And the committee seldom has a quorum.”