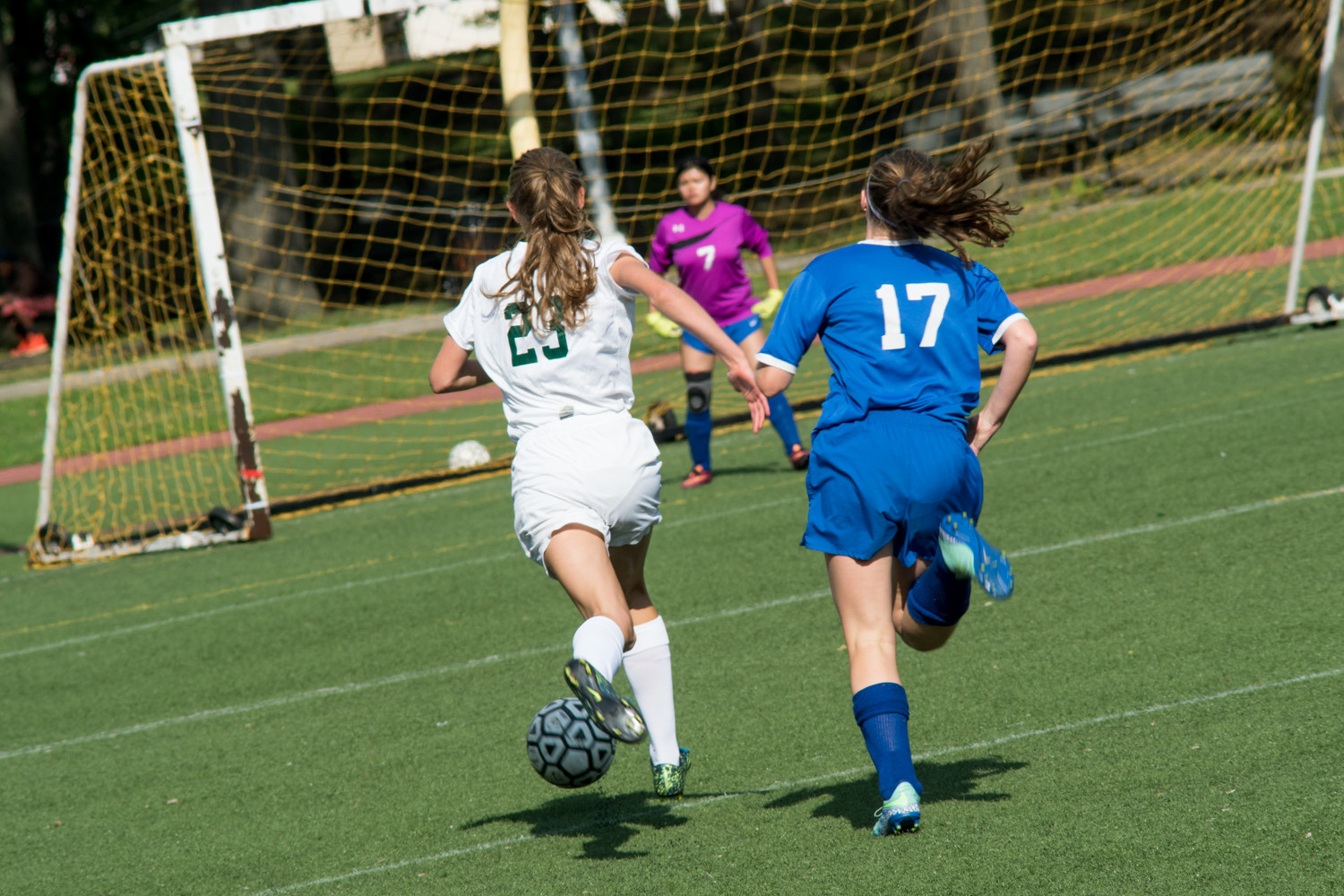 Claire Glendening (23) is one of six Bronx Science seniors who have neer experienced defeat in a regular season game in their careers.
Julius Constantine Motal
By Sean Brennan

As far as proclamations go, to say the Bronx Science girls soccer program has been an intimidating presence in the borough over the years ranks right up there with saying “Hamilton” tickets are a little pricy and Aaron Judge home runs travel great distances.

As John Mellencamp has said a number of times, “Ain’t no new news here.”

So when the Wolverines were putting the final touches on their regular-season ending 8-0 domination of Lehman, there was no one at Lehman’s field who was surprised at either the outcome or the lopsided score.

Why is that, you ask? Because the victory, which cemented a flawless 10-0 regular-season mark for Bronx Science, not only earned the Wolverines their fourth straight Bronx A-1 Division title, but it also concluded a regular season that saw Science outscore its opponents by the staggering total of — wait for it — 63-2.

No, that’s not a misprint.

The Wolverines allowed exactly one goal in September (to Clinton on Sept. 14) and one in October (to Riverdale/Kingsbridge Academy on Oct. 1). Yes, this Green Machine is that dominant.

“It is a crazy number,” said Science head coach Annie Eckstein, who has led the Wolverines to a 47-0-3 regular-season mark over the past four seasons. “We can definitely score goals.”

But for as dominant as Bronx Science has been this season — and despite the fact the Wolverines have reached two title games in the Public School Athletic League playoffs in the past three seasons, winning the city title two years ago and appearing in the semifinals last year — Eckstein is taking a cautious approach to the upcoming playoffs this season.

“I don’t think our goal differential is actually representative of where we are in the city,” Eckstein said. “I think it’s very representative of where we are in the Bronx. We’re a very strong team in the Bronx, but we really haven’t seen much competition outside the Bronx, and I think there are other very strong teams that we would not be able to score as many goals against.”

To Eckstein’s point, when Bronx Science drubbed Lehman last Thursday getting four goals from senior Meleni Rahaman and one apiece by fellow seniors Zoe Lainis and Melina Asteriadis — a trio of seniors who have never tasted regular-season defeat in their careers — the victory came against a Lehman Lions team which was the second-place finisher to Science in the division. The Wolverines ended up sweeping the two-game season series from Lehman by a combined score of 14-0.

That is why Eckstein is tempering her enthusiasm a bit heading into the playoffs.

“It’s great, it really is,” Eckstein said. “But it’s just that we haven’t seen a really strong team in our division, and that is going to be a challenge for us going into the postseason.”

What kept the Wolverines interested during the season as they steamrolled their way through the Bronx was the goal of posting yet another unbeaten season. In the three previous years, the Wolverines had posted records of 12-0-2 in 2014, 14-0-0 in 2015 and 11-0-1 last season. No one wanted to be the team to break that streak, and it was a topic of discussion throughout the season.

“Absolutely. We hate getting scored on,” Eckstein said. “Forget losing, forget tying, we just hate being scored on. So it was very important for us to remain unbeaten.”
The Wolverines will find out this week what seed they will earn for the PSAL playoffs as well as who they will play and where they will play them. In the past three seasons, Science has earned a top-three seed each year, being tabbed a three-seed when they won the city title two years ago and a two-seed last year when they reached the semifinals.

But again, Eckstein is exercising caution this time around.

“I don’t think we’ll be that high this year,” Eckstein said. “We had a non-division scrimmage versus Hunter (of Manhattan), and we lost 6-1 and Hunter lost a non-league game to Brooklyn Tech, 3-1. So I would really be surprised if we were in the top four. I’m hoping that we will get in the top 10, somewhere from five to 10 is what I’m expecting because we do still have a very strong team and we still have designs on going all the way. But it’s not going to be the easiest road this year.”

Science won its final five games of the season by a combined 37-1 score. But Eckstein thinks there are still some things her team can improve as the postseason is set to begin.

“We’re playing great soccer, just not consistently,” Eckstein said. “But I’m very happy. This is a great ending to the regular season. But going forward, we are going to have a tough road ahead of us.”