Change could soon be inbound for Independence 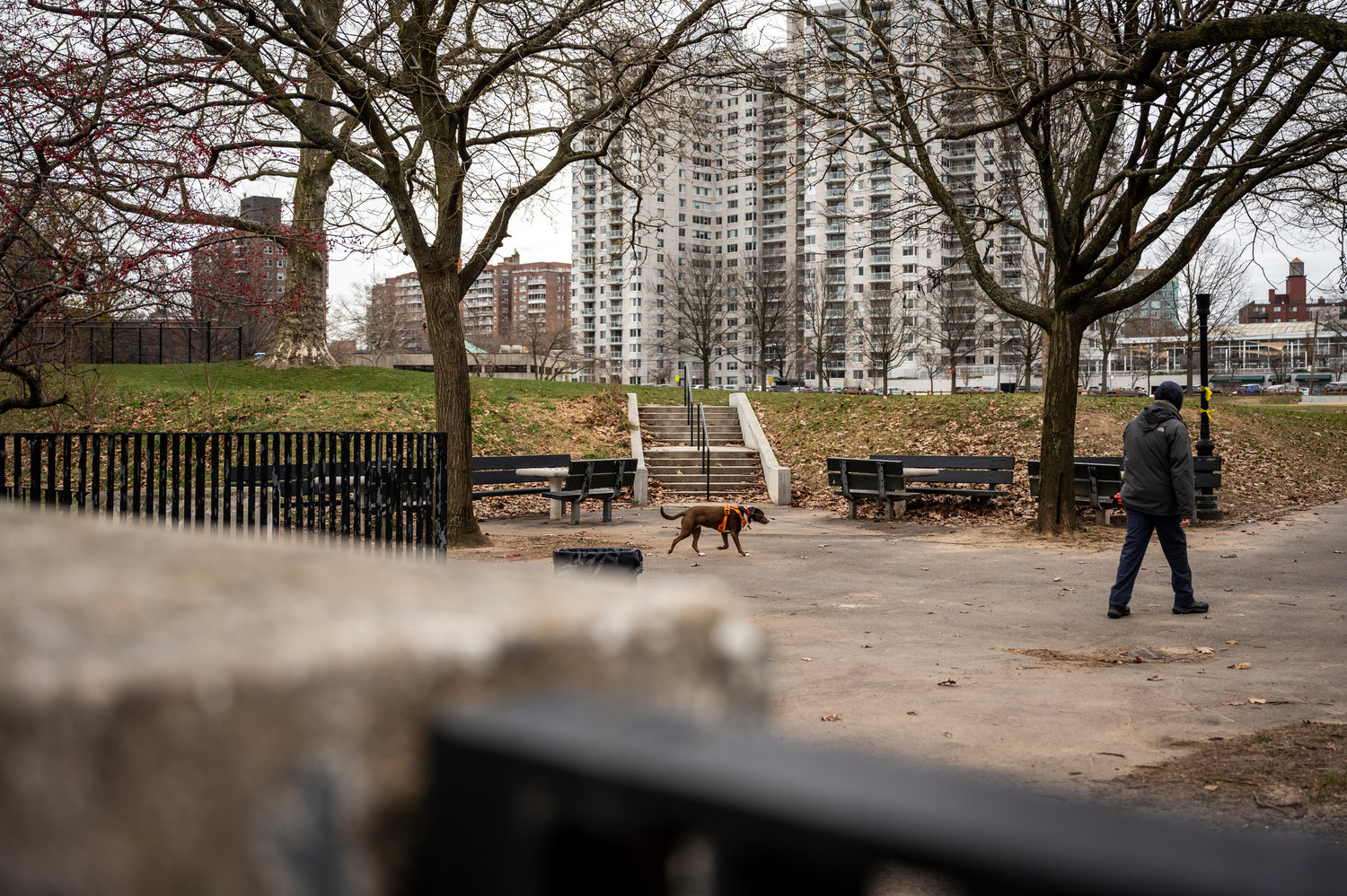 A man takes his dog for a walk through Seton Park on a chilly December morning. The park sits along Independence Avenue, which could become the site of several road design changes in the near future as part of an effort to discourage drag racing on the avenue.
HIRAM ALEJANDRO DURÁN 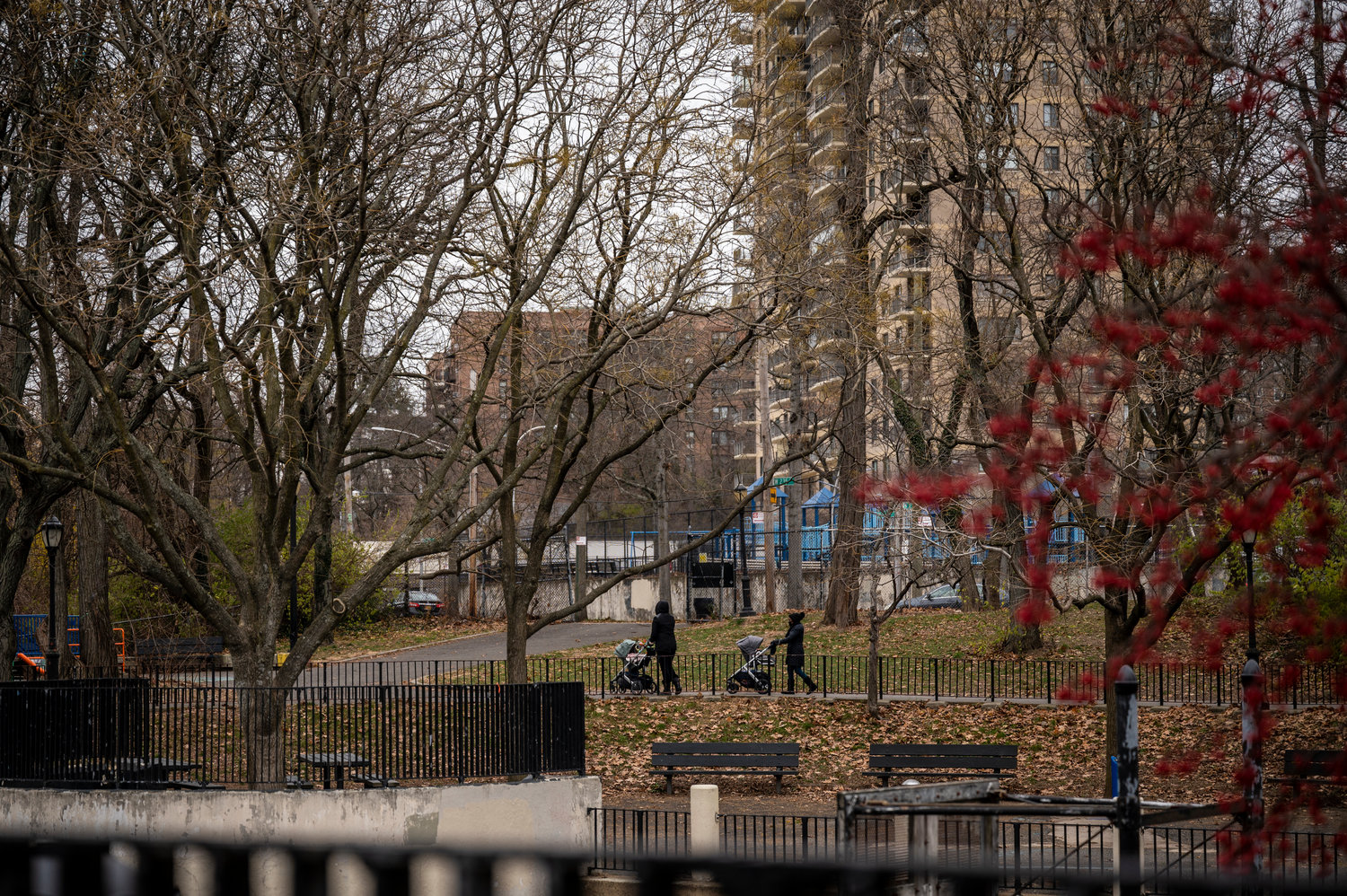 Members of a working group from Community Board 8’s traffic and transportation committee made several suggestions to stomp out drag racing along Independence Avenue. Among them were adding parking-protected bicycle lanes and speed bumps at problem intersections.
HIRAM ALEJANDRO DURÁN 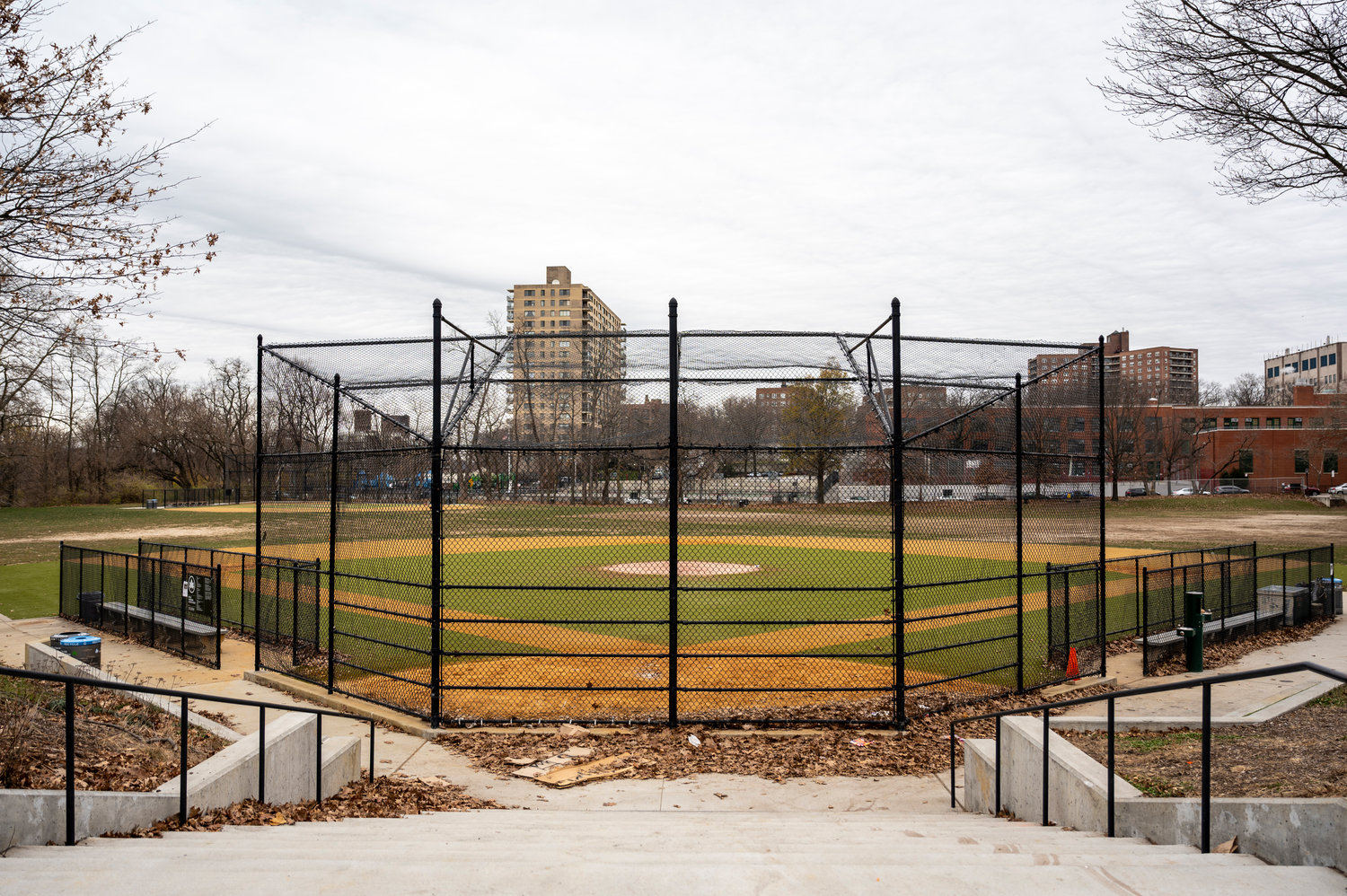 Seton Park lies at the edge of Independence Avenue — a hotspot for reckless driving practices like doing ‘donuts’ and street racing. But several members of Community Board 8’s traffic and transportation committee suggested some design changes that could be made to the avenue as well as nearby streets in an attempt to quell those practices.
HIRAM ALEJANDRO DURÁN
Previous Next
By ROSE BRENNAN

For the better part of the year, Independence Avenue has been the site of reckless driving and street racing. With the danger the practices pose — in addition to the noise —it’s no surprise those who live on and nearby the street are fed up.

But change could soon come to Independence Avenue, thanks to a months-long study by a working group from Community Board 8’s traffic and transportation committee. Comprised primarily of residents near the troubled areas, the committee evaluated the street, talked to neighbors, and even conferred with Bronx transportation commissioner Nivardo Lopez about what changes — and quickly — could be made to Independence.

Quickly is important because, at least according to working group leader Deb Travis, the neighborhood wants the street racing problem addressed yesterday.

“We wanted to make sure that things we suggested could be quickly implemented, because we have a problem right now that is serious,” Travis told CB8’s traffic and transportation committee in a recent meeting. “Time is of the essence. Even if we were to approve something today … there’s still a process of approvals through the larger community board.”

And not just that. Because CB8 is only an advisory body, it would require the backing of the city’s transportation department itself — the agency ultimately responsible for any changes that might happen on Independence or any other street.

These proposed design changes are a long time coming, Travis said. Not only could they discourage street racing on Independence, they also could make the street safer for others.

“Independence Avenue wasn’t perfect to begin with,” Travis said. “How many people have had a moment of pause or anxiety just trying to cross Independence Avenue? Maybe it was in the morning when you were trying to drop your child off at school. Or maybe it was in the evening (when) you were walking home and you’re just trying to keep an eye out for a car whipping around a corner or through an intersection.”

These new changes would serve to visually narrow Independence, hopefully making it less attractive for street racers, Travis said. The narrowing also would make pedestrian crossing faster and safer simply because they would have less distance to traverse.

But these changes do come with a cost — one some neighbors might find steep. More than 30 parking spaces would be lost. At least initially. But some of those spots could be recovered, Travis said, by turning West 235th into a one-way street traveling westbound between Independence and Douglas avenues. Not only would this change complement West 236th — which is one-way traveling eastbound between the same avenues — it would allow the creation of 41 new diagonal parking spaces along the new one-way street.

The idea of transforming West 235th into a one-way was something many neighbors supported. Not so much the proposed parking scheme on the same street. Wendy Silver, who lives along Independence, worried about people breaking into cars there, as the area isn’t particularly well-lit or monitored.

But break-ins weren’t Silver’s only concern. She’s also worried about her elderly and physically disabled neighbors, whose mobility is more limited — even if the change means more parking spaces overall.

“There’s people with disabilities and older people who cannot walk from 235th to 237th or 239th,” Silver said. “I understand there’s a net gain, but it doesn’t help my neighbor who can’t walk that far because he’s disabled.”

The group also suggested adding flexible delineators and road bumps to problem intersections — like West 239th and Independence. Such features could deter another favorite reckless driving activity as of late: spinning donuts.

Finally, the group recommended a study for a possible traffic light at the West 237th and Independence intersection, as well as enhancing the existing crosswalks and marking them with flexible delineators.

“You almost need an archaeological team to go find it, but it’s there,” Travis said of the crosswalk at West 240th Street. She suggested “putting in paint (to show) that there’s a crosswalk there, putting some signage there, maybe using some treatments that would slow traffic down so that it’s safe for pedestrians to cross.”

While many praised the working group for its multi-faceted approach to cutting down reckless driving, some felt it didn’t go far enough. Samantha Charlip, who lives along Independence, said she understood the focus was on cost-effective, easier-to-implement design changes, but believed reckless drivers wouldn’t necessarily pay attention to them.

“We need more infrastructure to really force traffic into their proper lanes in these areas,” Charlip said. “If these guys are ramming into cop cars and they’re assaulting people, I feel like a plastic flexible barrier isn’t necessarily going to stop them. But a cement median might.”

As many noted at the meeting, reckless driving and street racing isn’t just an Independence Avenue issue — it’s borough-wide. It’s citywide. But while Travis’ working group mainly focused on structural changes, she recognized it should be addressed from multiple angles, including law enforcement and noise control.

And at least within the boundaries of CB8, she feels that’s being done.

“This is really just one aspect of a multi-pronged approach,” Travis said. “The community board is very involved in many ways of trying to track down this reckless driving.”