Prestigious institution opens to the public in new Mott Haven home on Dec. 3 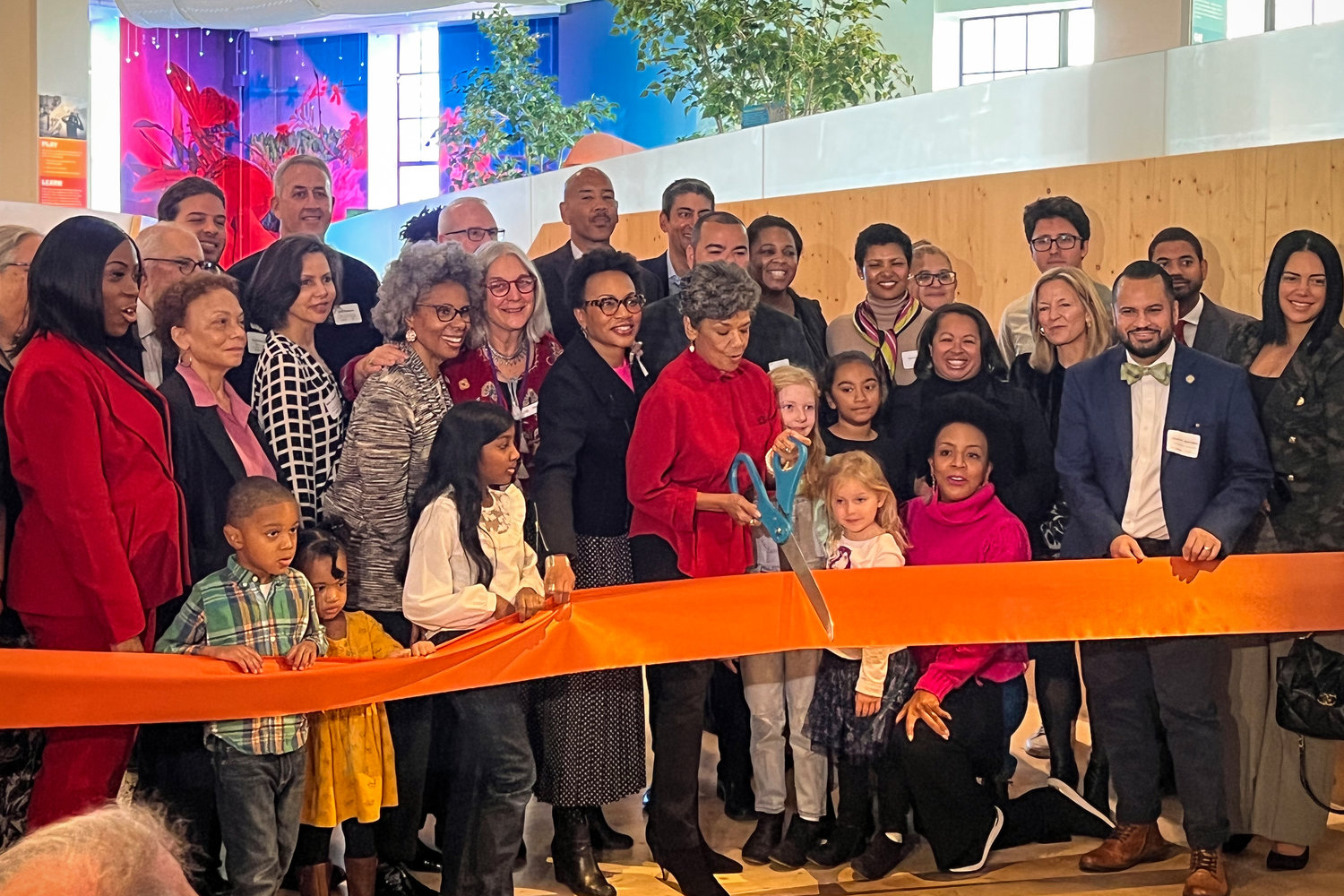 Past and present local electeds, city agency officials, donors, and board members gathered with the staff of the Bronx Children’s Museum to witness Sonia Manzano, who plays Maria on Sesame Street, cut the ribbon in the museum’s new space at 725 Exterior St. on Nov. 16.
ABIGAIL NEHRING 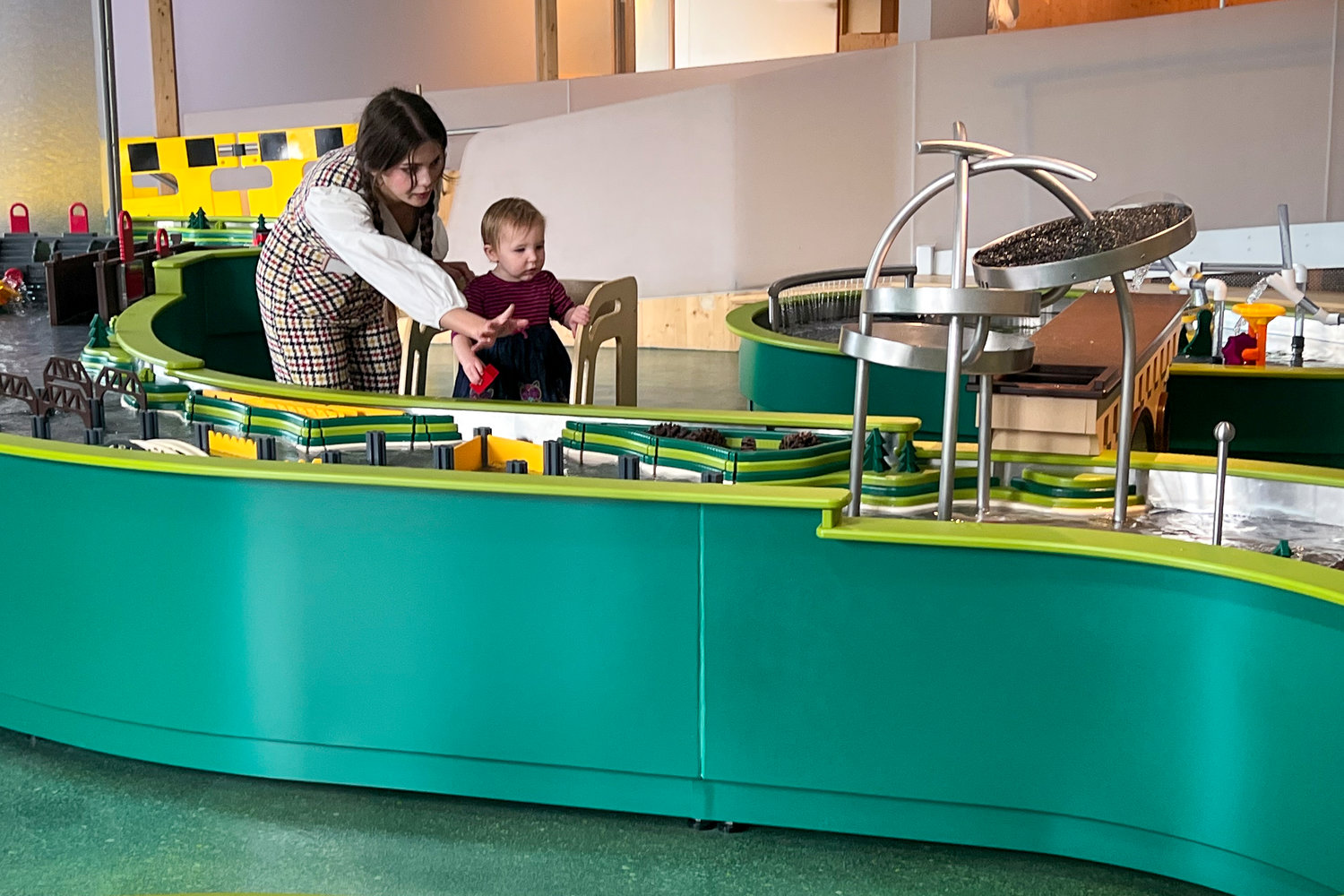 A 30-foot-long indoor stream in the waterways exhibit captured this curious toddler’s attention, one of a few lucky kids who fanned out across the Bronx Children’s Museum to explore the new space for the first time Nov. 16.
ABIGAIL NEHRING
Previous Next

The children of the Bronx deserve the best, and we think we have achieved just that — an unforgettable, beautiful space they ... will enjoy for years to come.”
CARLA PRECHT, executive director
Plan your museum trip

Finally, the Bronx Children’s Museum has its own permanent space at 725 Exterior St., a block away from Yankee Stadium.

The museum will open to the public starting Saturday, Dec. 3.

The museum will be open three Saturdays in December: Dec. 3, Dec. 10 and Dec. 17. Starting in January, it will be open Tuesdays, Thursdays and Saturdays. Opening hours are 10 a.m. to 1 p.m., and 2 to 5 p.m. Admission is free for a limited time through January.

To get there from northwest Bronx using public transportation, take the Metro-North Hudson Line to Yankees-E. 153rd St. or take the 4 train to 149 St.-Grand Concourse. You can also take the B or D train to 161 St.-Yankee Stadium, a 10-minute walk from the museum.

Parking is available for a fee at the Bronx Terminal Market garage at 22 E. 151st St.

The Bronx Children’s Museum unveiled its new 13,000-square-foot, sun-drenched home with sweeping views of the Harlem River last week. For the better part of a decade, the Bronx facility has been a “museum without walls,” operating out of a purple bus that roved the borough bringing exhibits to 15,000 Bronx residents annually. It’s been a favorite at Riverdale’s annual RiverFest.

Those days are over and executive director Carla Precht could not be happier.

The space is “a combination of a fine arts museum space and a children’s museum that emulates a natural landscape with all its beauty, twists and turns, surprises and diversity,” Precht said.

O’Neill McVoy Architects designed a sloping walkway that simulates a park path, with low curved acrylic walls to accommodate its visitors’ small stature and help caretakers keep an eye on them. They were inspired by Jean Piaget’s seminal mid-century study of space and cognitive development, “The Child’s Conception of Space.”

“The space reflects the fluidity of water, which is an overarching theme throughout the museum,” Precht said. “The children of the Bronx only deserve the best, and we think we have achieved just that — an unforgettable, beautiful space they will be proud of and will enjoy for years to come.”

The museum will open to the public Dec. 3 on the second floor of the 1925 powerhouse in Mill Pond Park at 725 Exterior St.

It shares the historic space with the city parks department, which has offices on the first floor.

Precht said Councilman Eric Dinowitz was instrumental in winning the endorsement of the Bronx’s city council delegation in the museum’s request to become a member of the city’s Cultural Institution Group, which includes the American Museum of Natural History, the Metropolitan Museum of Art, the New York Botanical Garden, and others.

The city assumes expanded financial responsibility for maintaining and operating these 34 institutions, so joining would be a huge financial boon.

The Bronx Children’s Museum tripled its budget the last three years, Precht said, but its bid to join the CIG would bring greater long-term financial stability. Current culture group members in the Bronx include the Bronx Museum of the Arts, the Bronx County Historical Society, Wave Hill, and the Wildlife Conservation Society, which operates the Bronx Zoo.

“There are many organizations that would like to be part of the CIG,” Precht said. “These decisions are made by the mayor. He will have the deciding vote. We’ve been advocating for it for years, but every time there’s a new mayor you have to start all over again.”

The museum also relies on city council members’ budgeted discretionary funds to be able to bring a variety of programming to schools. They teach students about local flora and fauna that live in the waterways and have even raised trout and released them into the watershed with pre-K classes. Those funds didn’t come through in Dinowitz’s district this year, but Precht is hopeful the school program funding will resume for northwest Bronx in the next fiscal year.

A few lucky kids got a first glimpse of the museum Wednesday following a ribbon-cutting ceremony in the main exhibit area. They crawled around in a cave-like alcove built into the lower level and then wandered upstairs to try on a porcupine costume. They checked out “Boogie Down Bronx,” a miniature replica of a city neighborhood, complete with a community garden, and casita, with fantastical murals painted by 12 Bronx-based artists curated by Natalie Collette Wood.

On the other side of the museum, they sent tiny plastic barges floating down an indoor river built on a 30-foot water table. Meanwhile, the Harlem River gurgled and lapped against its banks just a few feet away outside.

“I was an avid supporter of this project in the city council, and I am proud to see it come to fruition,” said Bronx borough president Vanessa Gibson in a speech during the ribbon-cutting ceremony. “This project will give the Bronx a cultural resource center dedicated to providing our children an opportunity to dream big, express themselves, and aspire to be whatever they want to be.”

The $14 million project involved the collaboration of museum staff, the city department of design and construction, the parks department, and the department of cultural affairs. The historical powerhouse is the only remaining building on the Bronx Terminal Market site. Its ice-making and food storage capabilities made it an engineering marvel in the early 20th century. It has since been restored and permanently preserved by the city park’s department with modern features like a green roof, highly insulated walls, and new high-efficiency plumbing.

“Through this newly renovated building, we’re advancing equity and education, giving kids in the Bronx the museum space they deserve,” said parks commissioner Sue Donoghue, who also celebrated with the museum staff and elected officials at the ribbon-cutting ceremony Nov. 16.

“The Bronx has gone far too long as the only borough without a permanent children’s museum and now that ends,” said design and construction commissioner Thomas Foley. “Today’s ribbon cutting signifies the delivery of a much-needed investment for children in the Bronx.”