Church of the Mediator's future uncertain 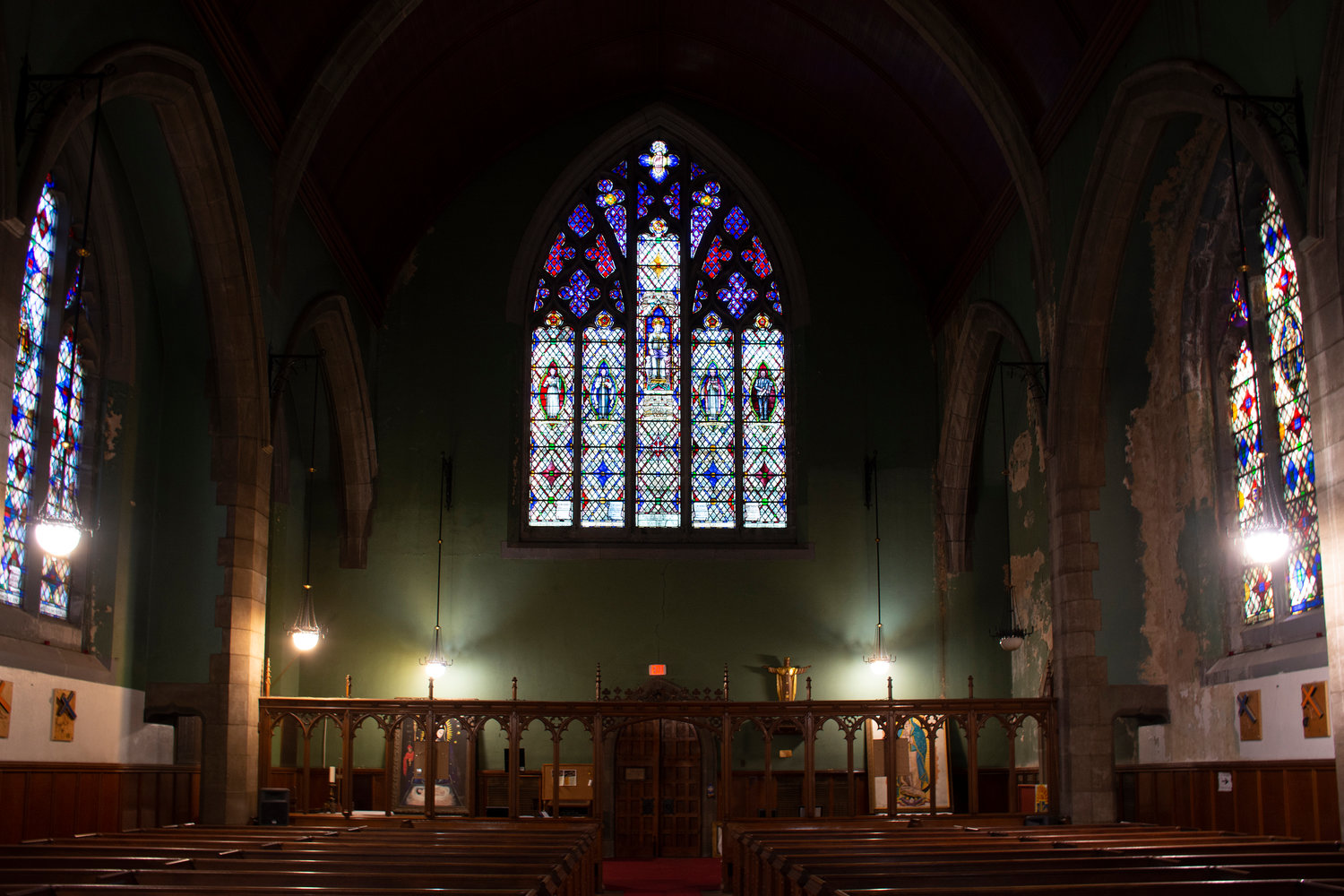 The reredoses behind the Episcopal Church of the Mediator's high altar were carved by English craftsman George Tinworth.
ABIGAIL NEHRING 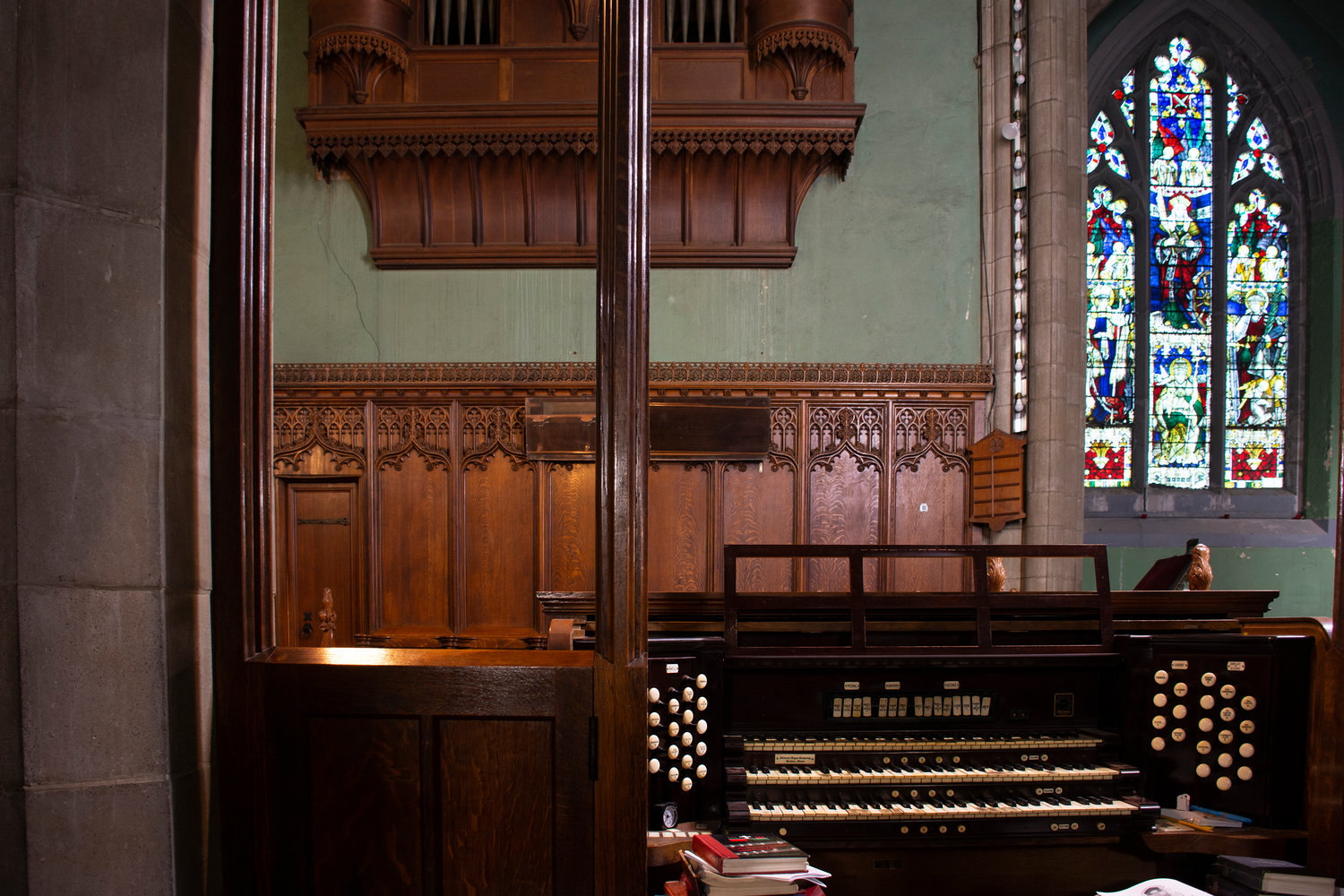 Open hymnals lay strewn on the consul of the Episcopal Church of the Mediator's 1,176-pipe Boston Skinner organ, built in 1923, and still used in Sunday services.
ABIGAIL NEHRING
Previous Next
By Abigail Nehring

It’s a $10 million ultimatum — and one parishioners hope they have a prayer of meeting.

That’s what it’s going to cost to restore the 1914 neo-Gothic stone structure that houses the Episcopal Church of the Mediator on West 231st Street between Corlear and Kingsbridge avenues. If not, church leaders might be forced to hand the property over to developers.

The high price tag includes necessary repairs to bring the building up to code, make it watertight, update the plumbing and mechanical systems, and safeguard it from structural issues in the future, the Episcopal Diocese of New York told The Riverdale Press.

The “little Cathedral in the Bronx,” as Bishop William T. Manning called it, was designed by Henry Vaughan — the architect of the National Cathedral in Washington — and was built over two decades beginning in 1908.

The sanctuary was “packed to the doors” the day of its consecration on Jan. 23, 1927, a reporter wrote in The New York Times.

But declining membership and a mounting debt to the Episcopal Diocese have brought many of the city’s historic parishes to the brink. There are 80 members on Mediator’s mailing list, and Sunday attendance hovers around 55.

In bits and pieces, congregants have learned in recent years just how imperiled their church building has become. A Sep. 15 report by Marie Ennis and Melanie McCloy of Old Structures Engineering found no immediate structural problems in the church building, but noted the significant repairs were necessary to address deterioration and water damage, including partial roof replacement.

A report a month earlier recommended replacement of the church’s heating and plumbing systems to address potential hazards.

But it wasn’t until one parishioner stumbled across a series of renderings showcasing possible mixed-use developments drawn up by architectural firm Perkins Eastman that many started to realize how perilous Mediator’s continued existence really was.

“I was on my way to make copies of something, and then I see these plans, the renderings,” said the parishioner, who asked to remain anonymous because of the sensitive nature of what’s happening. “And I’m like, ‘When did this happen?’ So these are the plans now. Nothing else can happen. And I knew I couldn’t touch them.

A diocese spokesperson declined to say who had paid for the architectural renderings, but diocesan property services director Egbert Stolk noted that “with the increasing debt to the diocese, we hope that the studies will provide some useful information to make an informed decision on the future of the site, while ensuring the survival of the parish.”

In outer boroughs, churches
all battle for survival

The disparities are stark within the New York diocese. While some parishes have merged — like St. Stephen’s and St. Martin’s in Brooklyn’s Bed-Stuy neighborhood — or have had their deteriorating historic buildings put on the real estate market, like St. Luke’s in Harlem, select few have become property developers in their own right, if only through an accident of history.

Trinity Church on Wall Street became the steward of 215 acres in lower Manhattan through a land grant from Queen Anne in 1705. Today, Trinity Real Estate, the church’s property management arm, oversees a $6 billion portfolio overlapping with Hudson Square, and offers seminars on property development to less fortunate parishes facing existential questions of their own.

“We as a church are going to be more and more irrelevant if we are not really engaged with our local communities,” said the Rev. Canon Britt Olson of St. Luke’s Episcopal Church in a 2021 seminar hosted by Trinity.

“It’s a struggle for most congregations in the United States.

“What resources do we have when we don’t have any money in the bank? Well, we have buildings and we have property.”

After declining the vestry’s request for financial assistance to pay back a mounting debt of operating costs, the diocese designated Mediator a “vulnerable congregation” in 2019, triggering a process set out in church canons to intervene on congregations experiencing financial or disciplinary problems. St. Luke’s in Harlem received the same designation in 2018.

The church’s vestry was replaced by an administrative authority, which governed the church until late 2020 when a new vestry was elected through online videoconferencing at the height of the coronavirus pandemic.

That same pandemic, meanwhile, took its toll, even claiming a Mediator member to complications of COVID-19 at the time.

The church’s kitchen, fellowship hall and yard have always thrummed with activity on weekdays. But some of the local groups and church programs that use the space may now get phased out — or in some cases, suspended abruptly.

Until this week, the Food Justice Ministry has continued to pass out bags of fresh produce and dried goods to about 300 people who line up outside the church’s basement on Friday afternoons. But last Sunday, a church member informed The Press that Father Luis Enrique Gomez announced to the congregation the food pantry would be suspended indefinitely, and a notice about the suspension was posted outside the church shortly after.

It’s closed this Friday, according to an online listing of food pantries, but the church could not be reached for comment.

A support group for parents of children with special needs that meets at the church monthly will also need to find a new space, said Crusita Ramos, who coordinates these “We Are Family” meetings. They were given a deadline to move to a new location, but told The Press she wasn’t authorized to speak further about it.

“Churches in this position in non-affluent parts of the city have this problem with deferred maintenance,” Richardson said. “We have property support grants and property support loans. But to be a candidate, you have to be able to repay it.”

The church’s 10 elected lay leaders voted Sep. 29 on the question of demolishing the church building and developing the property, with four votes in favor of demolition, three against, two abstentions, and one absence. The diocese confirmed the results from meeting minutes taken by junior warden Mathew Ford.

Members have attempted to launch capital fund drives for repairs, but a fundraising committee faltered and disbanded last year, one parishioner said, because church leaders barred them from proceeding. They said the church and diocese have also strongly asserted that landmarking the church — which could potentially protect it from demolition or redevelopment — is not in cards.

“Every time it came up, they talked about this ideal of a developer that would come and lease this site for 99 years,” the member said.

Peter Ostrander, a historian with the Kingsbridge Historical Society, said Mediator’s reluctant march toward destruction is all too familiar in the Bronx.

“They’ll keep you in the dark and feed you scraps,” Ostrander said. “It’s the mushroom theory of management.”

Mediator granted an easement to a developer for a new apartment building on the lot facing Corlear Avenue in 2009, a deal that has barely made a dent in the church’s debt, although neither the church nor the diocese would say how much they owed.

“They lost their parking lot and playground on the west side,” Ostrander said. “They sold off pieces in the past. I understand the church’s predicament, but is there another way? We lost too many things over the years.”