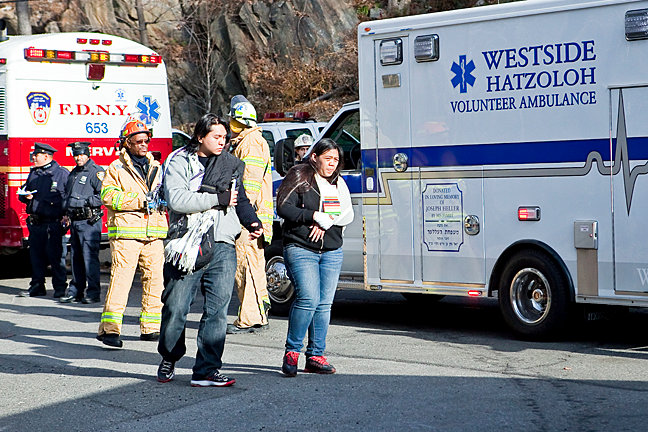 Victims of the Metro-North derailment near the Spuyten Duyvil station on Dec. 1, 2013, walk toward an ambulance on Edsall Avenue.
MARISOL DIAZ / File
By RICHARD L. STEIN

EDITOR'S NOTE: This story was originally published on Dec. 5, 2013, and was reprinted as part of the 70th anniversary of The Riverdale Press.

The ringing phone awoke me at 8  on Sunday morning.

This cannot be good news, was my first thought.

I was surprised to hear the voice on the other end of the line, my old friend and former photo editor, Alan Zale.

“Sorry to wake you,” he said, “but they’re saying there was a derailment at Spuyten Duyvil, and it’s a big mess.”

That is how I learned about the 7:20 a.m., crash of Metro-North Train 8808 that killed four people, injured dozens more, and indefinitely suspended service on the commuter railroad’s Hudson Line.

I am 66 years old, and I have been with The Riverdale Press for most of my adult life. But readers have rarely seen my byline. I am not usually a frontline writer unless something happens when the office is closed. Then I am the first to get the call.

My name is closely associated with the paper, and my home phone number is in the book. As a result, if you sift through our “morgue,” you would not find it affixed to sunny feature stories. Instead, you would see late-night fires, bodies in duffel bags dumped under parkway bridges, and derailed trains.

I admit, I took some pride in being the first responder for The Press, although reporter Andy Gross and photo editor Marisol Diaz soon took over.

By the time I had thrown on my clothes, grabbed my wife’s camera and something to jot notes with, and raced to the scene, Palisade, Independence, Johnson and Edsall avenues were all clogged with emergency vehicles of every description: Police cruisers from unfamiliar precincts, EMS, hospital and private ambulances, fire department pumpers, hook-and-ladders, and rescue trucks.

Police helicopters were hovering overhead in a cloudless sky, and several of the force’s police boats were fanning out along the Harlem River shoreline beneath the Henry Hudson Bridge.

Television news vans were beginning to arrive and jockey for position.

It was, without question, the biggest, fastest and best-organized disaster response this community has ever seen — all within a tightly confined space on a steep hill.

Many residents of apartments overlooking the scene came out onto the street to seek comfort in the company of one another and compare notes about what they heard and saw of the crash. One, who was reluctant to give his name, said he had just lifted his morning coffee to his lips when he heard what sounded like a landslide.

College student Eli Mernit, who uploaded the first photos of the crash to our website, slept through the crash itself only to be awakened by the sound of firefighters using the Jaws of Life to pry open the doors of train cars lying on their side.

Some reached out to help train riders who, though not injured, appeared to be stunned and confused.

Peter Stillman, a white-haired Manhattanite, offered a grisly description of his train car with “blood everywhere.” I offered to give him a ride to the subway when I was finished at the site — it was something I had done the last time a derailment disrupted service on Metro-North’s Hudson Line just last summer. But someone from Palisade Avenue already had Mr. Stillman covered.

As I made my way closer to the horrific tangle that was once a commuter train, I was impressed with the calm, somber demeanor and the overwhelming numbers of the city’s first responders.

Firefighters pulling survivors from the wreckage. Paramedics setting up an improvised triage unit along Edsall. Police establishing a command post to coordinate the activity. They all earned tremendous respect and gratitude.

I am grateful, too, for the many in the community who came to the aid of The Press in covering the story — from Alan Zale’s initial call to former editor Kate Pastor’s update on the hasty creating of a reception center on the John F. Kennedy high school campus for families of lost or injured passengers.

Nathan Muir, a Spuyten Duyvil resident I met at the scene, was kind enough to share his excellent photos with our readers. And friends and neighbors called throughout the day, including City Limits editor Jordan Moss, and my brother and one-time co-publisher Buddy Stein. His sharp-eyed editing improved my web posting, and then he disseminated my story on his Facebook page.

Even as her husband, Councilman G. Oliver Koppell, was participating in a late-morning news conference, Lorraine Coyle was thoughtful enough to email her own photos to us.

What could be more emblematic of a community’s involvement with its newspaper?