As more calls come in for help, scant few are accepting city assistance 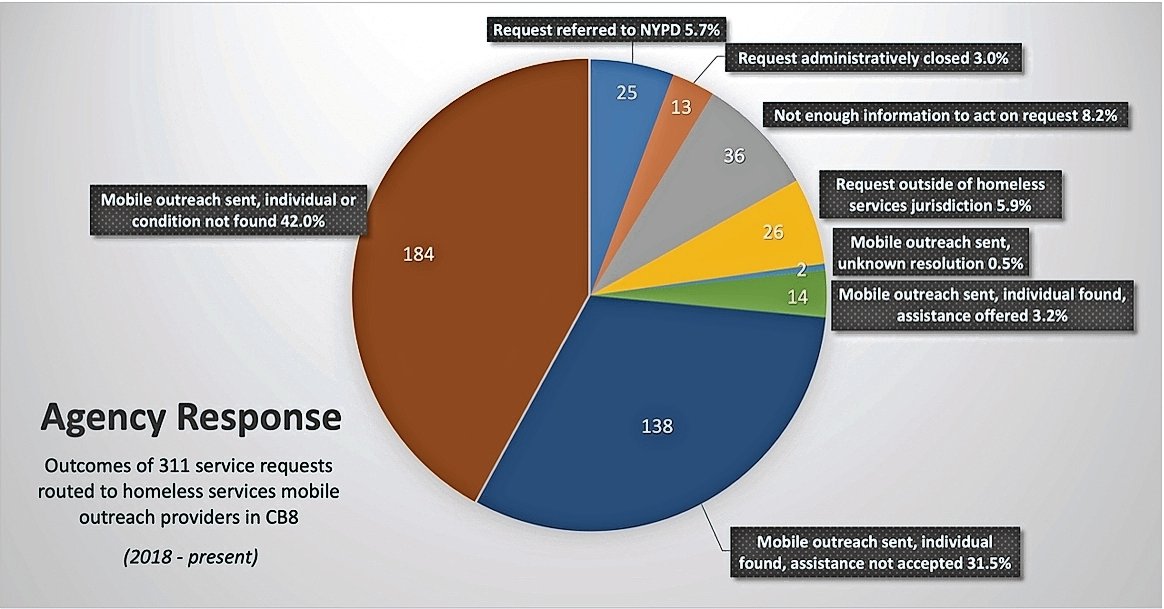 Abigail Nehring is covering housing for The Riverdale Press through Report For America.

When the temperature reached a high of 99.6 degrees Fahrenheit in North Riverdale last Wednesday, city shelters reported a daily count of just under 49,000 people, up from about 45,000 at the beginning of 2022, the coldest time of year.

The city’s shelter census is growing, and so is the unsheltered population, which the city attempts to count every year in January. There were 3,439 people in this year’s survey conducted on the night of Jan. 5—likely a significant undercount due to methodological limitations, which advocates like the Coalition for the Homeless have long pointed out.

In the northwest corner of the Bronx, more people are calling 311 to report homeless people in need of assistance. The 311 service request logs, which are updated automatically every day, show that there have been 83 such calls in Community Board 8 so far this year, compared to 27 the same time last year, and 30 in 2020.

Only 3 percent of 311 calls dispatched to homeless services result in individual assistance. More commonly, social services outreach teams arrive at the location only to find that there is no one there. When they do find someone reported by a caller, the likelihood they will refuse assistance is much higher. This is the outcome about a third of the time the agency responds to 311 calls in CB8.

“It is clear that far too many New Yorkers are resorting to sleeping on the streets and in transit facilities because they feel they do not have better options,” said Jacquelyn Simone, policy director for Coalition for the Homeless. Encampment sweeps may be counterproductive, and Simone believes they are pushing people further away from services rather than helping them access the city’s low-barrier safe haven shelters.

At least one sweep occurred on Broadway in CB8 earlier this year as part of Mayor Eric Adams’ vow to crack down on homelessness in the streets and subways. Elsewhere in the city, police and sanitation workers are sweeping street encampments without the collaboration of trained nonprofit social services teams, as had been their practice previously.

The practice appears not to be effective, and violates Centers for Disease Control and Prevention guidelines. A single site on Forsyth Street in Chinatown has been swept seven times so far this month, prompting a coalition of New York doctors to pen a plea to the mayor to halt them.

“Vital medications and original health documents are often thrown away increasing the risk of acute health crises and burdening the health care system,” the doctors wrote. “Public health has been cited by the mayor and his deputies as a rationale for these sweeps. So we ask: public health for whom, and at the expense of whose personal health?”

Around-the-clock outreach is not a new service in New York City, but it grew in size and sophistication under former social services commissioner Steven Banks. In 2017, the city launched an interagency task force dubbed HOME-STAT — the Homeless Outreach & Mobile Engagement Street Action Teams — which engages with people living on the streets and subways and tracks them in a shared database.

The five boroughs are covered by six nonprofit providers, including BronxWorks in the Bronx, Breaking Ground in Brooklyn and Queens, Project Hospitality on Staten Island, and the Center for Urban Community Services working with Goddard Riverside and Breaking Ground in Manhattan. Bowery Residents Committee conducts outreach on the subways.

It’s unclear why trained social services providers have not been present at all of the recent encampment sweeps, but it coincides with the unionization of outreach workers at Urban Community Services and Breaking Ground, two of the city’s nonprofit contractors for these services.

Urban Community Services and Breaking Ground workers joined AFSCME AFL-CIO District Council 37 earlier this year, the city’s largest public employee union. DC 37 spokesperson Thea Setterbo said they’re in the process of negotiating a contract, but could not say how close they are to a deal or speak about the workers’ demands.

“I’m calling all of you now to get skin in the game. Come and volunteer, because when I hear someone complain, the first thing I’m going to ask, did you volunteer?” Adams said. “We will pair you with city outreach workers, we’ll give you the proper training. We’re looking for everyone to participate, those with lived experience of homelessness, faith leaders, retirees, and everyday citizens.”