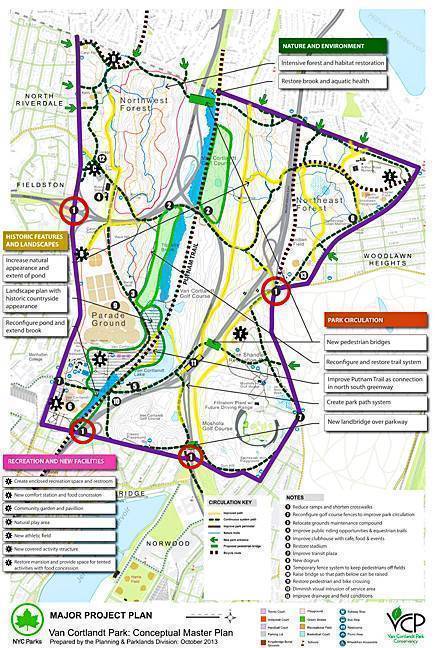 Courtesy of the New York City Department of Parks and Recreation
A map of Van Cortlandt Park highlights changes proposed in a 20-year master plan.
By Sarina Trangle

After more than a year of community meetings, Mr. McKinney took ideas from park-goers and compiled the most common requests into a plan that he said would eventually guide how money is distributed to develop the park.

The master plan would be the first endeavor of its kind since the city purchased the Van Cortlandt estate in 1888.

“There was never a landscape plan for the park. There was not a hand of master,” said Mr. McKinney, who also drafted the master plan for Riverside Park in Manhattan. “The vision here is not the vision of our Parks Department, but our communal vision that the park is… a recreational and cultural destination.”

By acquiring the Putnam Rail Line, the city could take Tibbetts Brook out of the sewage system. Currently, Westchester’s watershed drains into the stream, which flows into Van Cortlandt Lake and then passes through pipes and tunnels that carry sewage into the Harlem River, and eventually, the Randalls Island Sewage Treatment Plant.

The master plan calls for moving Tibbetts Brook above ground and letting it run along the Putnam Trail to the Harlem River.

Nearby, Mr. McKinney said he would like to restore Van Cortlandt Park Lake to a more organic shape and setting, while landscaping the historic core of the park – which runs between the Parade Ground and the Major Deegan Expressway – so it resembles the respite it was before the area became a park.

Several proposed projects covered the map. The plan put a play area for children in the northwest corner of the park, a community garden and improved entrance near the Mosholu Parkway and Broadway intersection and a comfort station and small food concession on the northern end of the Parade Ground. Mr. McKinney said reorganizing the stadium area and providing a covered space with restrooms could offer community centers and non-profits much-needed programming space.

To improve the circulation system, the plan proposes consolidating dirt trails and concentrating on keeping them in scenic areas. It also promotes the East Coast Greenway biking and pedestrian route along the southern end of the park and a path that could accommodate cyclists biking from Getty Square to Vannie.

Mr. McKinney said he would like to move the John Muir Trail and the fence lining the Van Cortlandt Golf Course south so people could stroll from one side of the park to the other without walking a few feet away from traffic whooshing by on the highway.

Mr. McKinney mapped three Central Park-style pedestrian bridges into the plan. One would permit amphibians, walkers and bikers to cross the Henry Hudson Parkway near the city line. Another would span Mosholu Parkway near the Van Cortlandt Park South entrance. And the third would extend over the Major Deegan just north of where it hits Mosholu Parkway, a project the Department of Environmental Protection has previously studied because the city pledged to construct it as part of the Croton Water Filtration Plant project, but never funded the project.

The community must generate a sense of urgency around removing invasive species, Mr. McKinney said, noting that Norway Maples are slated to dominate another 50 acres of parkland within two decades. The trees’ roots emit poison and prevent other plants from growing.