Civilization is put to the test in 'Terra Firma' 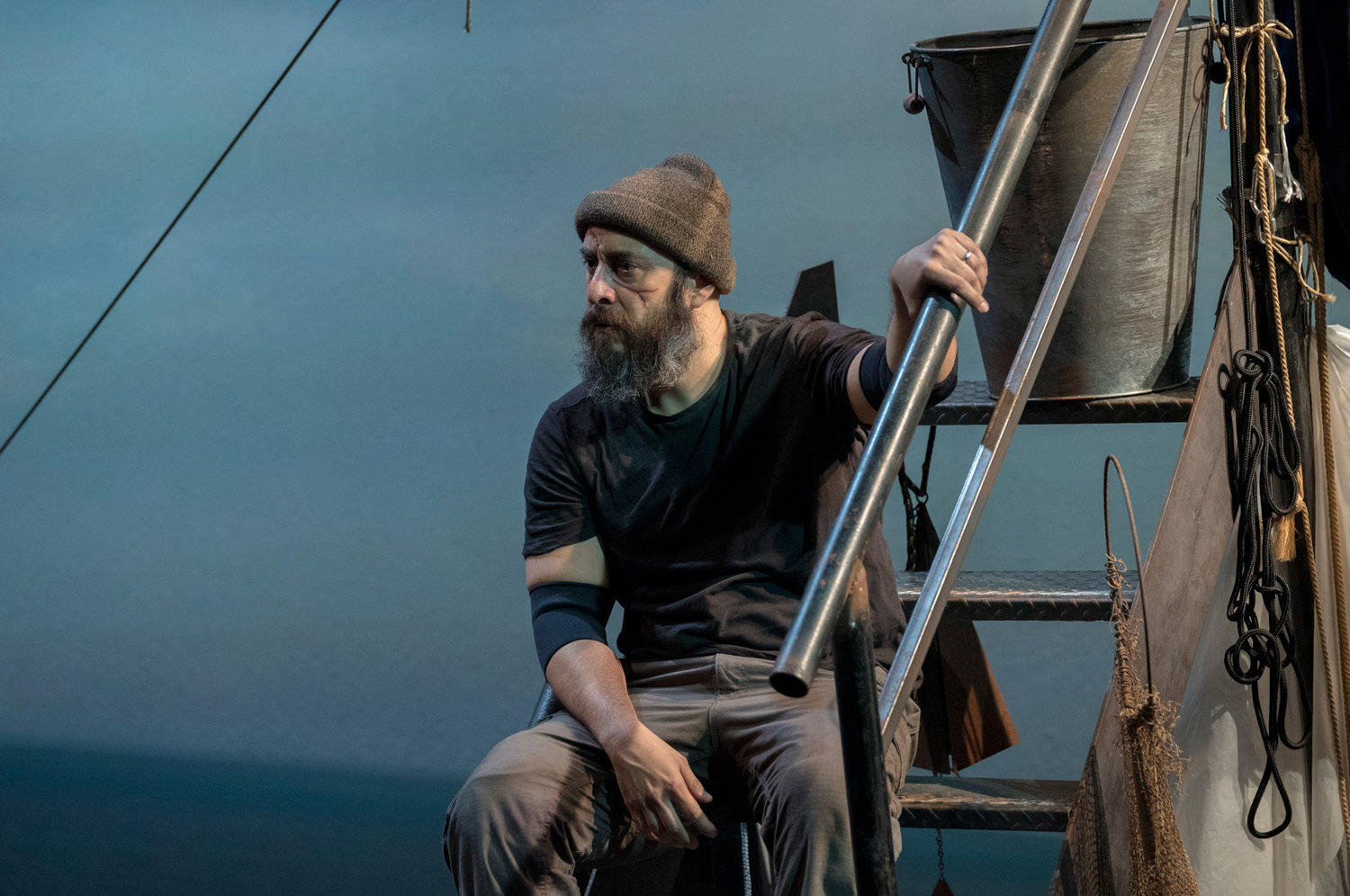 Gerardo Rodriguez plays one of the citizens of ‘Terra Firma’ a slightly apocalyptic look at what might happen in a world where climate change takes over, and people are forced to create their own countries on the oceans.
Courtesy of Ashley Garrett Photo
Terra Firma

The play, written by Barbara Hammond and directed by Shana Cooper, runs through Nov. 10 at the Baruch Performing Arts Center, 55 Lexington Ave., at 25th Street. For tickets, visit TheCoopNYC.org.

The world looks a little different, but not all that different. And that’s the crux of it in Barbara Hammond’s new play, “Terra Firma.”

This inaugural production of The Coop at the Rose Nagelberg Theatre at the Baruch Performing Arts Center is an ambitious display of dystopian survival.

Eerie parallels with 2019 permeate the action. Imperial vanities, bizarre weather, border disputes, refugees, food shortages and disappearances are part of this fraught domain, leaving a ragtag group armed with little more than fists, gallows humor, and a few scraps of propriety to confront the challenge.

The setting fits: A military-industrial relic, repurposed into a literal kingdom all its own. Here, the growing pains of a teeny-tiny new nation play themselves out, with a witty flair to help keep disintegration at bay.

The author’s inspiration originates in the 1960s colonization of a World War II-era anti-aircraft tower in the North Sea by a British family, who then established their own micro-nation, the Principality of Sealand — complete with royalty, a flag, currency, passports, and anthem, and sports team.

Such is the eccentric conceit here, set in the near future after a war, and spun into a tale of creative adaptation and nation building.

And this tiny nation — Population: 5 — is, no surprise, a microcosm of the anxious planet of our times, nudged deeper into very credible and desperate straits.

The challenges come even faster, as the budding regime seeks stability. Disaster lurks, always, in the wider world, and just a footstep away on Andrew Boyce’s terrific set, a platform high above the sea.

Equal part scrapheap, lookout and frontier, this post-industrial wasteland serves as a giant reminder of mankind’s folly and a headquarters for both hope and, say to say, despair. With echoes from both Samuel Beckett and “Road Warrior,” “Terra Firma” has a quirky, ironic humor all its own.

This world premiere is a display of abundant technical virtuosity. Eric Southern’s lighting and Jane Shaw’s sound design bring a worthy edge to this harsh, forbidding realm. And Ntokozo Fuzunina Kunene’s costumes accentuate the topsy-turvy potential of the projected near future.

Director Shana Cooper keeps the action churning, although a perfect moment for intermission is not used, and thus the New York trend of eliminating the act break marches on. Nonetheless, the lively cast is more than game, with Andrus Nichols making the most of every regal opportunity as the Queen, and Tom O’Keefe, Gerardo Rodriguez, John Keating and Daniel Molina following suit in this sprawling fable of what-ifs.

There’s a real punch here, as the playwright serves up circumstances to underscore the sensitive veneer of civilization, riding a time bomb. “Terra Firma” lets us whistle in the graveyard, and honest laughter is always a plus.

But with the vise of climate change narrowing, the sad truth of “Terra Firma” is that it may be a guide as well as a bittersweet, rueful tale for the stage.