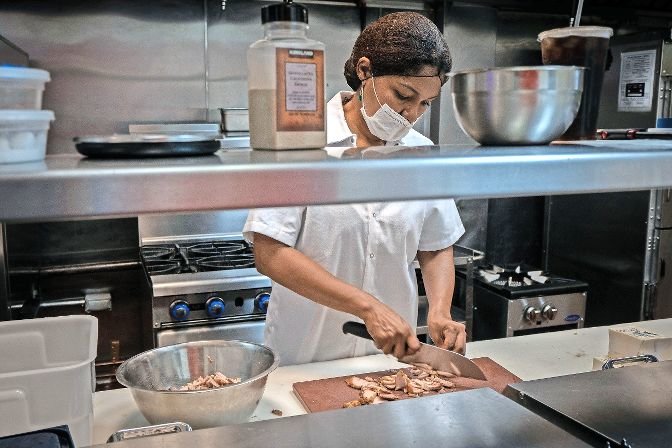 Claudia Berroa prepares food at Claudy’s Kitchen, a Peruvian restaurant she has run with husband Richard at 5981 Broadway since last month. Opening a new restaurant can be challenging enough, but welcoming customers for the first time in the middle of a pandemic can’t make it any easier. Yet, the couple says they have received a warm reception by the community.
HIRAM ALEJANDRO DURAN 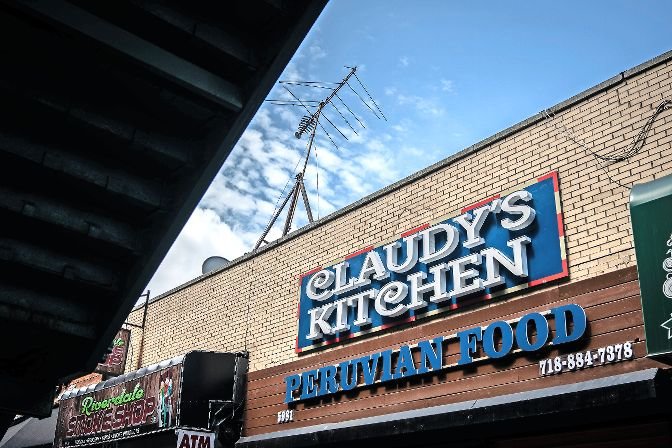 Even the signage announcing Claudy’s Kitchen to those coming off the West 242nd Street 1 station has an extra touch of hometown pride, designed by Milton Glaser, the award-winning creator of the ‘I love New York’ logo. Glaser told owners Claudia and Richard Berroa he wanted to help people from his home borough through his work.
HIRAM ALEJANDRO DURAN 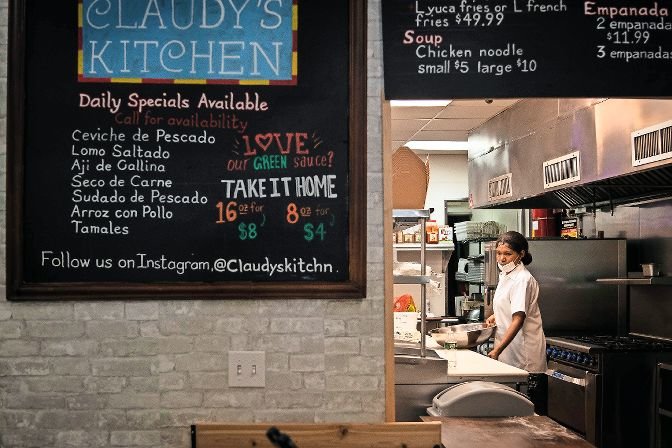 Claudia Berroa works diligently preparing food for the day at the new Peruvian restaurant she co-owns with her husband at the end of the 1 line on Broadway. Since opening last month in the middle of a pandemic, Claudia and Richard suggest customers take their meals to nearby Van Cortlandt Park since they’re not allowed to remain inside their eatery.
HIRAM ALEJANDRO DURAN 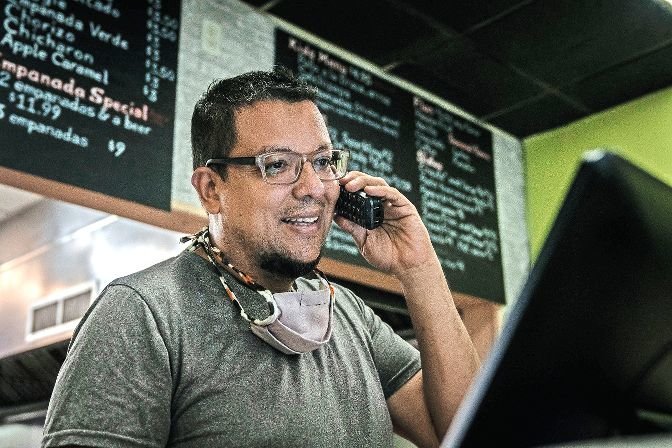 Richard Berroa, co-owner of Claudy’s Kitchen at 5981 Broadway, talks to a customer over the phone, suggesting they stop by to pick up the Peruvian restaurant’s well-received empanadas and ceviche.
HIRAM ALEJANDRO DURAN 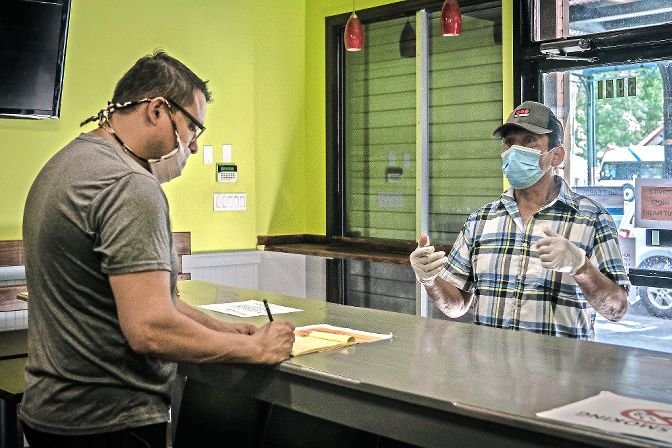 Richard Berroa opened Claudy’s Kitchen with his wife, Claudia, June 12 in the middle of the coronavirus pandemic. Because customers can’t yet enjoy their meals inside the 5981 Broadway restaurant, the couple suggests customers take their Peruvian orders packed in gable boxes — a kind of cardboard picnic basket — to nearby Van Cortlandt Park.
HIRAM ALEJANDRO DURAN 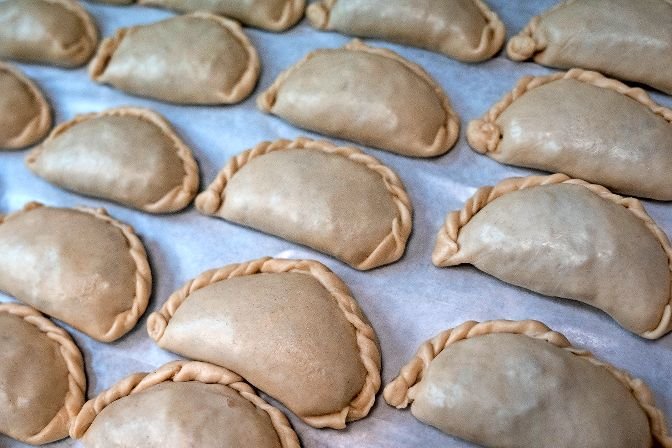 Beef empanadas are one of Claudy’s Kitchen’s signature dishes. The owners of this new Broadway restaurant, Claudia and Richard Berroa, have provided family-style Peruvian cuisine to grocery stores like Union Market for more than a decade. Last month, they fulfilled a dream by opening a bricks-and-mortar location at 5981 Broadway.
HIRAM ALEJANDRO DURAN 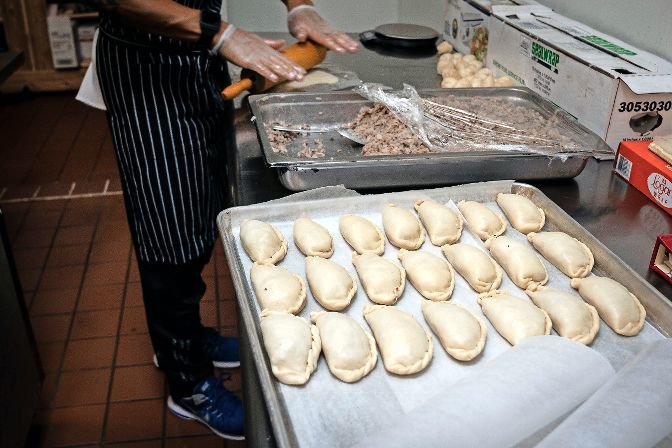 Beef empanadas are one of Claudy’s Kitchen’s signature dishes. The owners of this new Broadway restaurant, Claudia and Richard Berroa, have provided family-style Peruvian cuisine to grocery stores like Union Market for more than a decade. Last month, they fulfilled a dream by opening a bricks-and-mortar location at 5981 Broadway.
HIRAM ALEJANDRO DURAN
Previous Next
By RAPHAEL LASSAUZE

As more restaurants and stores pull up their shutters and open to a community that’s desperately missed them, there’s one establishment neighbors are still getting to know. That is, the ones who haven’t already discovered it in grocery stores like Union Market.

The specialized Peruvian recipes of Claudy’s Kitchen at 5981 Broadway, have been very well-received, according to owners Claudia and Richard Berroa, even though they’ve just opened their doors June 12. For the first time.

In the middle of the coronavirus pandemic.

“Of course, that wasn’t our original plan,” Richard said. “But we didn’t really have a choice at that point. We had to open.”

The restaurant, found right below the steps of the 1 train’s West 242nd Street station, may be new to a neighborhood that’s technically part of Fieldston, but it’s roots stretch back to 2007. It was a time of a much different economic upheaval — the so-called Great Recession, fueled by the collapse of the real estate lending market through subprime loans.

Back then, Richard was a paramedic living in the Bronx with Claudia and their newly born child. Times were tough, so hoping to contribute, Claudia started baking and selling flan out of the house.

“I used my grandmother’s recipe,” Claudia said. “And all my friends were like, ‘This is amazing. You should sell this.’ So I did, and then we thought we should be expanding.”

Despite the difficult financial state of the time, the Berroas brought samples of the family flan from one supermarket to the next, mostly throughout Manhattan, easily convincing them to add Claudia’s sweet family treat to their store shelves.

“Our flan has been at Zabar’s, Union Market and Garden Gourmet for years now,” Richard said. “This was before we even had the idea for a store.”

The Berroas brought their products to street fairs and markets, expanding to empanadas and other savory foods. Claudia considers the traditional methods of the culinary arts as something that connects people. She believes her process does just that.

“We don’t use any artificial flavors or preservatives,” Claudia said. “It’s handmade. We care about that. We care about giving something really good to the community.”

After years of selling and saving, it seemed the perfect time to set up a place of their own. There was an open commercial space on Broadway, right by the stairs leading up to what is the end of the 1 train line, or the beginning depending on which way you’re heading. Last September, no one had a clue about what was going to happen in 2020, and it seemed like a perfectly manageable time. So the couple put up their signage on Broadway and went to work.

Yet, problems began long before anyone ever heard the phrase “COVID-19.”

“There was a gas leak in the space next to us,” Richard said. “ConEd came back and fixed it in a matter of days, but they took a look at our pipes and they said the pipes were completely out of code and had to be replaced.”

It took their landlord several weeks to buy new pipes, delaying Claudy’s Kitchen opening more and more. When at last the pipes were finished and the Berroas were finally ready to open, the doors were locked again. This time, it was the country’s worst health crisis in a century, and the couple had to wait.

“We were excited and nervous at the start,” Richard said. “Then through March, April, so on, we’re at home, panicking, world ending. But there was one little sort of silver lining to it.”

That’s because Claudia felt something just wasn’t right. It didn’t take long for her to zero in on the sign they had installed months before on the front of their restaurant. Claudia had no enthusiasm about it at all.

So on a whim, Richard reached out to Milton Glaser, a National Medal of Arts recipient and designer of the iconic “I love New York” logo.

“I had been reading the paper, and I saw his name,” Richard said. “He got back, he was excited. The man was 90, and even as a paramedic, you think 90 and you see someone very frail. He wasn’t. Spry, energetic, so kind.

“He’s world famous and we told him our story and marketing budget, and he just agreed to it.”

Glaser told them he’d help because he was from the Bronx and wanted to give back whenever he could. Opening a business — a restaurant no less — had been Claudia and Richard’s hope for years. While most establishments are trying to figure out how to give diners some semblance of eating out, Claudy’s Kitchen has the benefit of the natural wonder just across the street — Van Cortlandt Park.

“We’ve been encouraging people to take the food into the park,” Richard said. “We didn’t design this place to be a dine-in-only place, so this works for us. We give these gable boxes to our customers and point them in the direction of the park.”

“This community has been wonderful,” Richard added. “The support they’ve given us has been amazing. People told us they had been waiting for us to open since September. And now, here we are.”