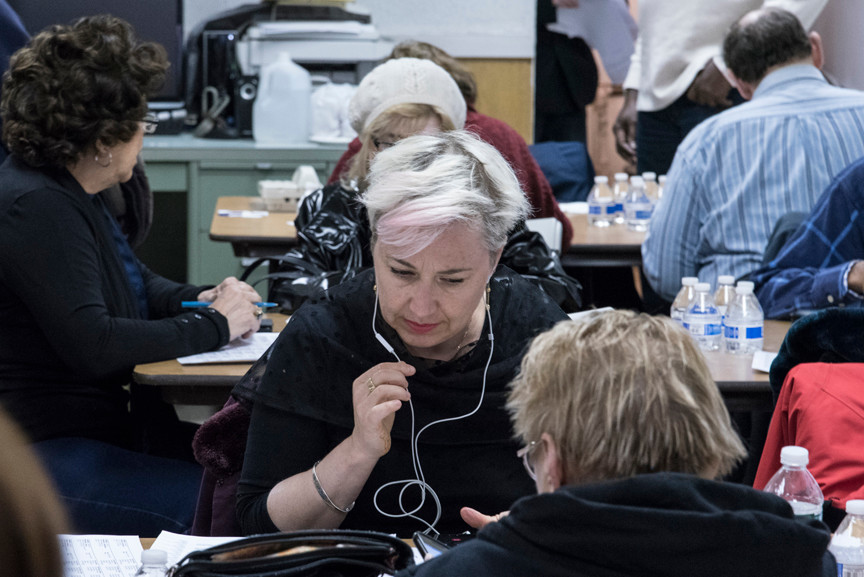 On the evening of April 6, the Benjamin Franklin Reform Democratic Club was buzzing with activity. About two dozen people were crammed into the small office on West 231st Street, sitting at tables with lists of names and phone numbers in front of each of them.

“We’re calling to remind people April 19 is the primary. We really hope you’ll come out to vote and vote for Hillary Clinton,” one volunteer said into his phone, as variations of that refrain bounced around the room.

Eric Dinowitz, the male Democratic district leader for the 81st Assembly district, hurried between the tables, making sure people had places to sit, outlets for their cell phones and enough numbers to call.

Marble Hill resident and volunteer poll worker Lenora Bryant came out to the Ben Franklin Club with a group of friends. Her main goal was to get people to vote in the primary, and she also wants to nudge them toward the Ben Franklin Club’s choice for the Democratic ticket.

“We tell them how important it is, this presidential primary, and we just ask them if they would like to try to get Hillary elected as the presidential nominee,” she said.

“I believe she can get the job done and she really cares about the people,” she said.

What about her rival in the Democratic primaries, Bernie Sanders?

Mr. Dinowitz, the son of northwest Bronx Assemblyman Jeffrey Dinowitz, made his own case for Ms. Clinton.

“People like someone who’s a progressive, who can get things done. I mean, that’s the kind of people we have in our local elected offices, and that’s the people we want as president,” he said.

“I think the crowd speaks for itself. It’s a blessing that we’re having trouble finding seats for everyone coming out just to make phone calls for Hillary,” he added.

Besides campaigning for Ms. Clinton, Mr. Dinowitz explained that volunteers were reminding prospective voters that they will be choosing delegates to send to the Democratic Convention in July. Assemblyman Dinowitz and his chief of staff Randi Martos are on the ballot in the 81st Assembly district. Both have pledged to support Ms. Clinton.

Andrew Turay was one of several volunteers with no connection to the Ben Franklin Club. He found out about the phone-banking event at Ms. Clinton’s campaign rally at the Apollo Theater in Harlem late last month. Mr. Turay, who lives near Lehman College, said he has supported the Clintons since they were the First Family of Arkansas, when he was impressed with then-Governor Bill Clinton’s education policies.

“I’m doing everything I can to help her win. I’ve been doing it for a long time. This is the best time to get it done,” he said.

Support for Mr. Sanders in the northwest Bronx has been more subdued. At the end of last year, a handful of supporters convened at an overpass above the Major Deegan Expressway to hang a banner for the senator from Vermont.