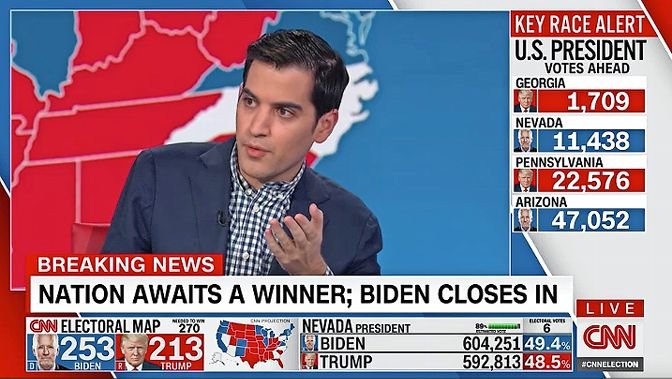 Election Day dragging into “election week” might have been torturous for those just wanting to know whether Joe Biden would pull out the win against President Donald Trump for the White House. But for those who like to nerd out about numbers — hours and hours of debate surrounding vote counts was a dream come true.

And there seemed to be no one more ready to challenge people’s assumptions about vote tallies and where they might trend than CNN political analyst Harry Enten.

The 32-year-old was a regular presence on the cable channel last week, primarily in the overnight hours led by anchors Chris Cuomo and Don Lemon.

What many viewers might not know, however, is that Enten was raised in Riverdale and attended Riverdale Country School.

He later graduated from Dartmouth College in New Hampshire, but not before a political internship at NBC News prompted him to start a blog called Margin of Error.

That led Enten to political website FiveThirtyEight before joining CNN.

Enten describes himself as a “renegade Jew” on his Twitter profile, which boasts more than 200,000 followers. And he credits his late father, one-time Bronx criminal court judge Harold Enten, for his introduction into politics as a child.

Democrats didn’t do as well as they hoped in congressional races across the country. But don’t anyone dare blame that poor showing on progressive Democrats.

At least as far as Congressman-elect Jamaal Bowman is concerned.

After U.S. Rep. Abigail Spanberger of Virginia appeared to blame existing and incoming congressional members further left from her of costing Democrats votes, Bowman took to Twitter to strongly disagree.

“Our movement is growing because we listen to, love and hear people,” Bowman said. “We didn’t get elected by our constituents to play the blame game and intra-party politics. People want results.”

Progressives were elected and re-elected “overwhelmingly,” Bowman said, and then mobilize in battleground states to push for Biden/Harris.

Attacks against other House representatives like Alexandria Ocasio-Cortez and Minnesota congresswoman Ilhan Omar is just playing into GOP hands, he added.