It’s the second-highest gift in Manhattan College history, this time given by the Kakos 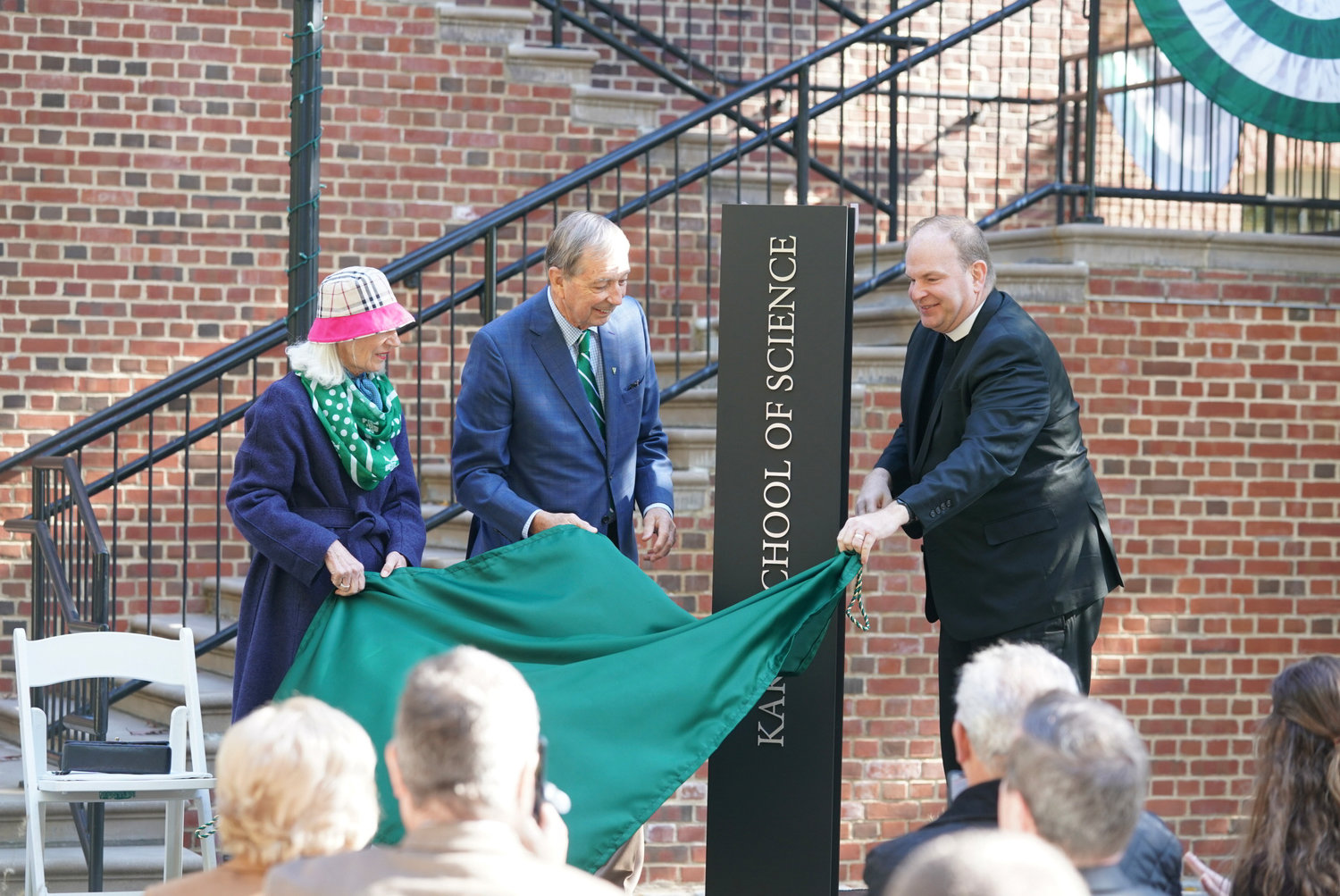 Aimee Kakos and Michael Kakos, unveil the sign announcing the Kakos School of Science at Manhattan College, as Brother Daniel Gardner, president of the college, helps out.
Courtesy of Brian Hatton
By Stacy Driks

When Michael Kakos arrived at Manhattan College 68 years ago as an engineering major, little did he know he and his wife Aimee, also an alumnus, would donate $15 million and have a science school named after them.

Manhattan College hosted an unveiling ceremony on campus last week to announce the Michael and Aimee ’58 Kakos School of Science.

The couple’s gift is the second highest in Manhattan College history. You have many heard of the O’Malley School of Business.

Thomas O’Malley, who graduated in 1963 and served as the chair of the college’s board of trustees, provided a $25 million gift along with his wife Mary to increase student scholarships and grants while increasing student research for the business school.

While students are eager to graduate, Rebecca Koglianse, a physics major, feels the gift is a bittersweet moment because while she is happy about the available funds, she will miss out since she will be a graduate.

She is excited for future students interested in pursuing undergraduate degrees in the STEM field.

There are currently 321 students seeking to obtain undergraduate degrees within STEM.

“The foundation is really kind of a collective of assets,” Michael said. “When we pass on, the foundation will take over” for what we had been doing while were alive.

Their gifts include funding from the Michael J. and Aimee Rusinko Kakos Foundation trustees will administer the funding to the college.

“It is wonderful for them to have a great legacy and come back and give back to us — you know this is not only for student scholarships,” said Marcy Kelly chair of the Kakos School of Science. “We plan to offer more research opportunities that will support both our students and faculty members.”

As science continues to evolve, and technology improves, the endowment will go towards innovative equipment and research. Infrastructure was important for the school as well. According to Kelly, there is always a need for facility upgrades.

“Any injection of money to these programs has to have an effect on the students,” Michael said.

Professors told Michael during the unveiling ceremony they have had a computer center that never existed before. This new center helps students get hands-on experience for more knowledge.

“I’m giving back what they’ve given me,” Michael said.

But he has given back to schools before Manhattan College.

The scholarship helps students financially who are studying abroad. He helped Niagara University in 2002, where he graduated in 1960.

After graduating with a degree in chemistry from Manhattan College in 1958, Michael Kakos was awarded a fellowship to Niagara University, where he earned his MS in chemistry. Later, he received an M. in industrial engineering at the Stevens Institute of Technology. He began his career in materials research, first in metals and then in ceramics. Michael then went into plastics, working at Celanese Corp.

Eventually, his skills and ambitions led him out of the lab – where he earned several foreign and domestic patents – and into sales and marketing. He traveled the globe before moving to London, where he settled for over four decades.

Michael founded Resin Express in 1987, which distributed engineering thermoplastic raw materials for the major worldwide producer and suppliers. Aimee joined the company in 1989, eventually rising to company director. Her education and teaching background were integral to the success of the business. They sold the company in 1997.

Aimee attended Penn State University, where they endowed the Michael J. and Aimee Rusinko Kakos Deans Chair in the College of Arts and Architecture. His donation plans to help students and faculty engage and advance in the arts. Yet, it also gives resources to the current and future deans of the university.

He also helped Cardinal Hayes High School with scholarships. According to the census, the graduate rate increased to 90 percent.

His experience at Manhattan College came in a package, he explained.

“What I learned here I put to use in my life, not only for the technology but for the ambiance of knowing people,” the alumnus said. “It was a good life.”

But it did not only connect his studies towards his life — it connected him to his Christian faith.

He came as an engineering major and left as a chemistry major. The dean of admissions was apprehensive about his abilities to succeed and directed him to chemistry.

“I could not have known that the chemistry laboratory and the movie ‘The Graduate’ would combine to determine my career,” he said during his speech that got a laugh from the audience

The only person who was upset was his mother. But not for him — he loved chemistry, especially in high school.

Michael was not the only STEM student to switch paths. Koglianse actually left the major Michael loved.

When she became a physics major, she never looked back.

“If you’re going to be a science major and have to work at a job, it’s really almost impossible,” Koglianse said. “So taking that worrying away — I’m so happy for other students.”

The coursework for the school’s majors is intense. Meanwhile, the cost can be a big burden for students.

“I wouldn’t be here if I didn’t have a scholarship,” Koglianse said

Since she received financial help, she didn’t need to work part-time to cover the cost.

Kelly said that Koglianse is one of their best students. She is one of 31 students on the school’s honor society. And she plans on completing her research in astrophysics and receiving her doctorate.

According to the college, 33 percent of Manhattan College students seek undergraduate degrees as first-generation students. Just like Michael.

“The Aimee and Michael Kakos ‘58 School of Science has a bright future ahead of it — the generous gift from the Kakos coupled with our new vision and mission,” Kelly said. “We’ll help usher in a new distinctive chapter for the Kakos School of Science.”