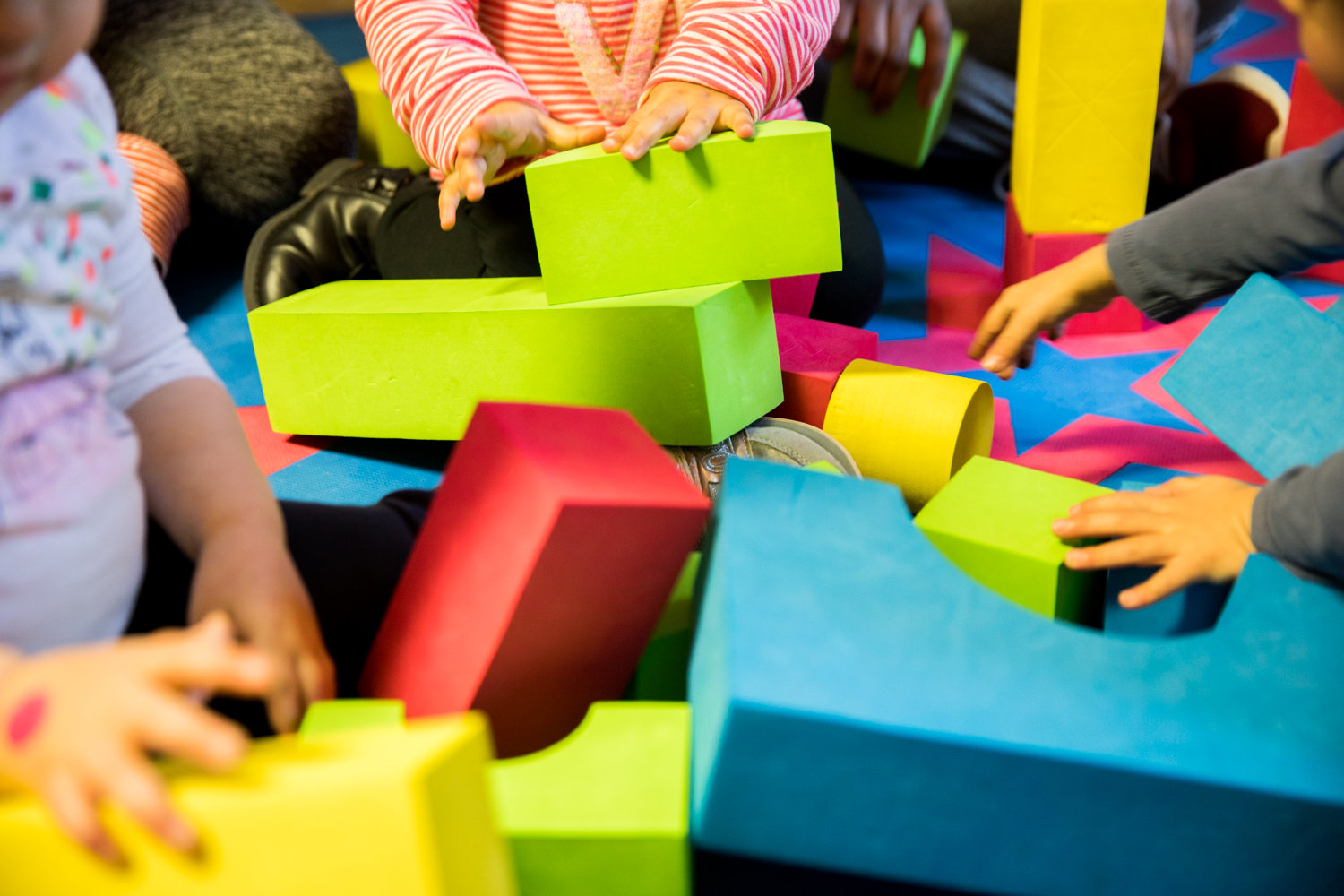 Children play with blocks at Rodi Daycare Center. Child care is often expensive, but U.S. Sen. Kirsten Gillibrand is hoping to mitigate some of that with legislation aimed at making it more affordable for students who have children.
JULIUS CONSTANTINE MOTAL 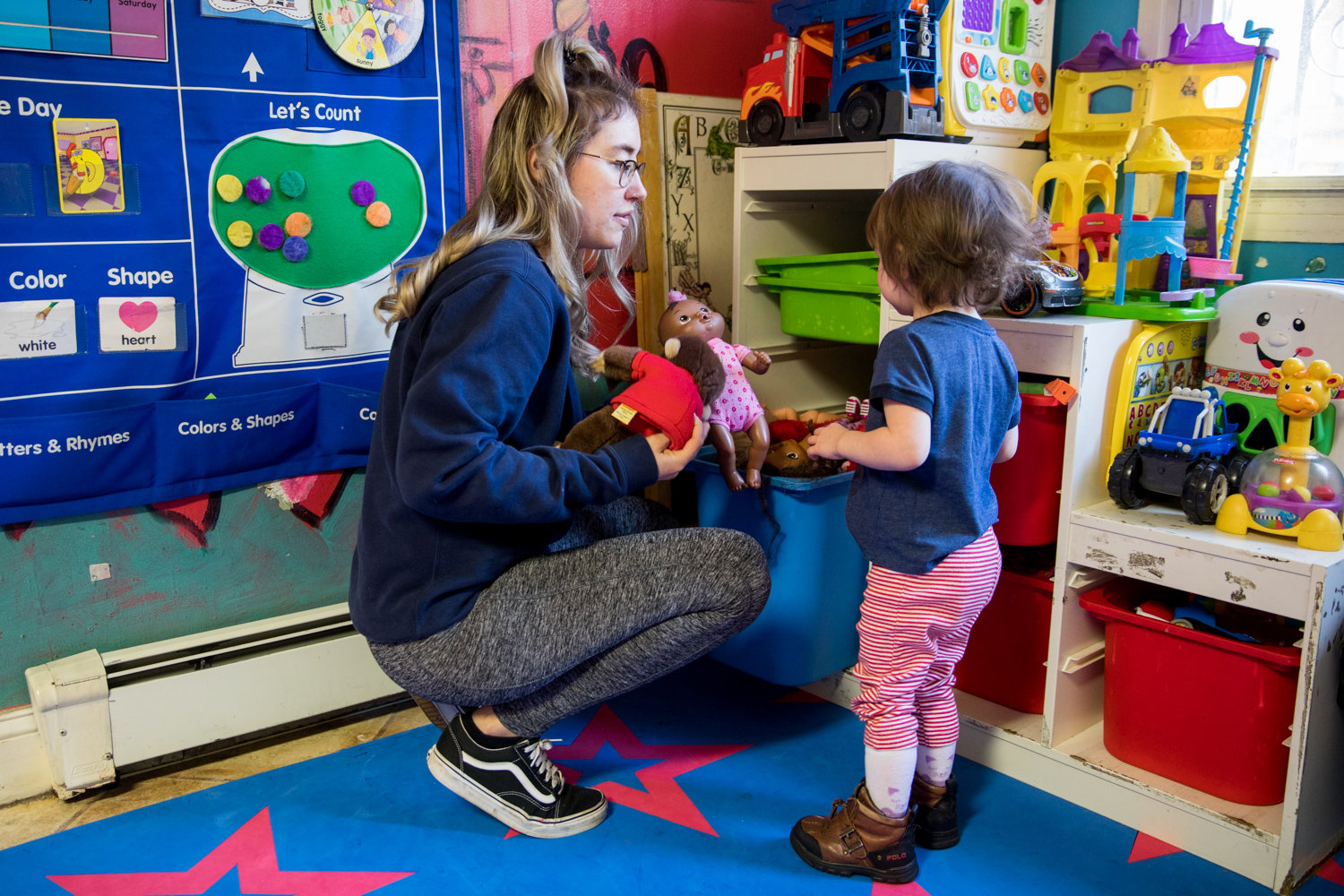 Rodi Daycare Center teacher Stephany Coffey offers a child a choice of toys. Rodica Chiacu, the center’s owner, understands that child care can be expensive, and has worked to keep her rates affordable for parents.
JULIUS CONSTANTINE MOTAL 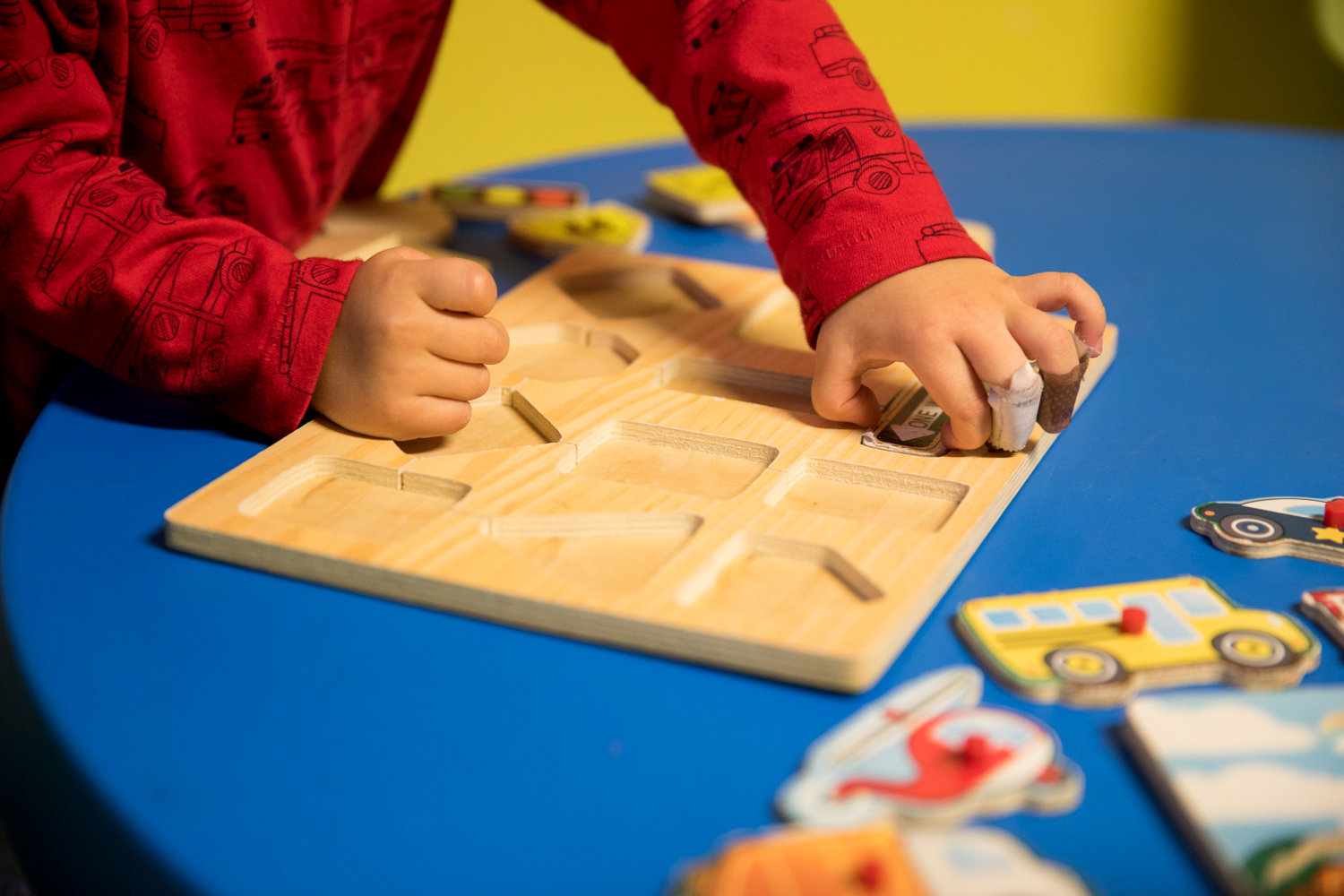 A child figures out a puzzle at Rodi Daycare Center on Netherland Avenue.
JULIUS CONSTANTINE MOTAL 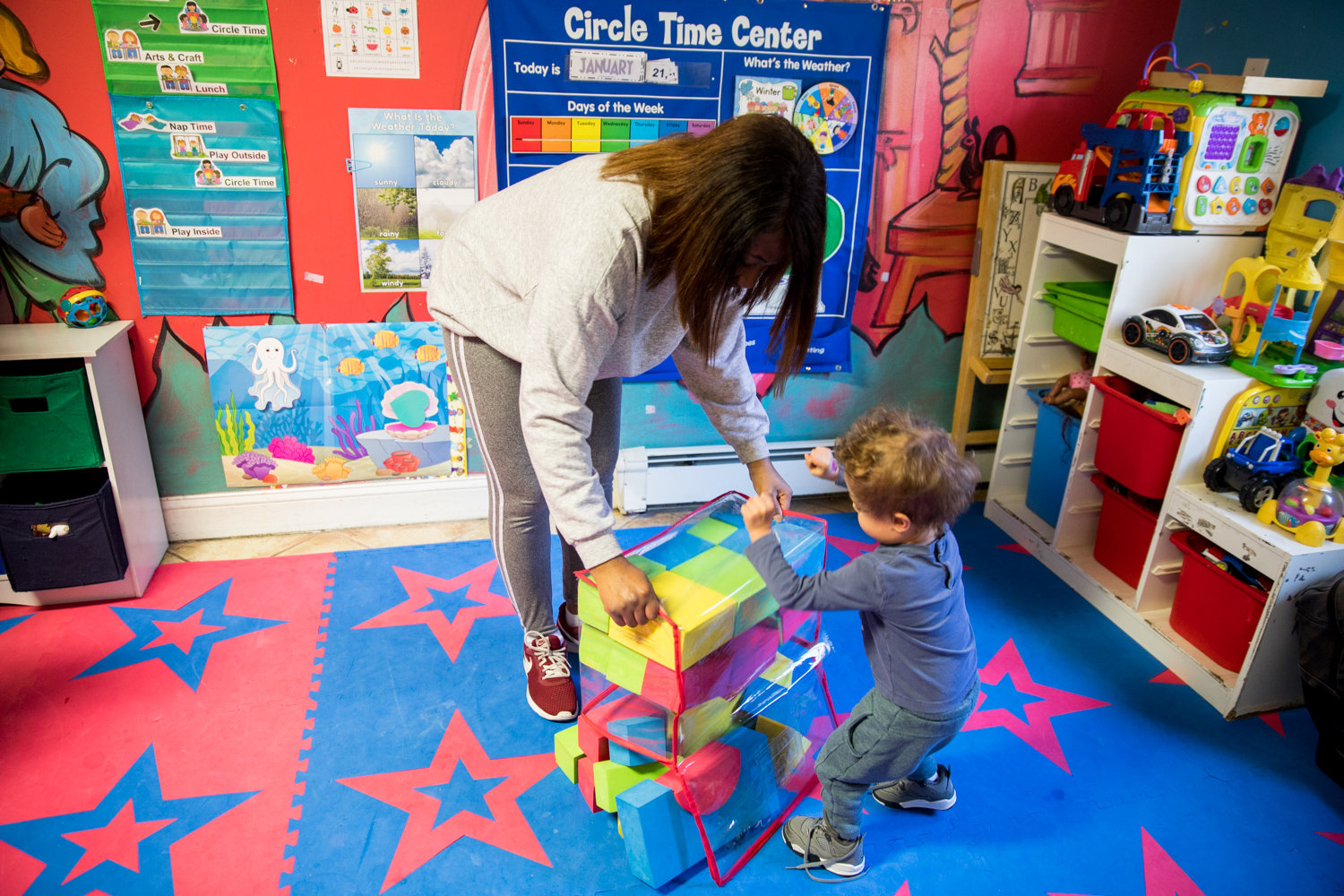 Christabell Nti unloads a bag of large blocks for children to play with at Rodi Daycare Center.
JULIUS CONSTANTINE MOTAL 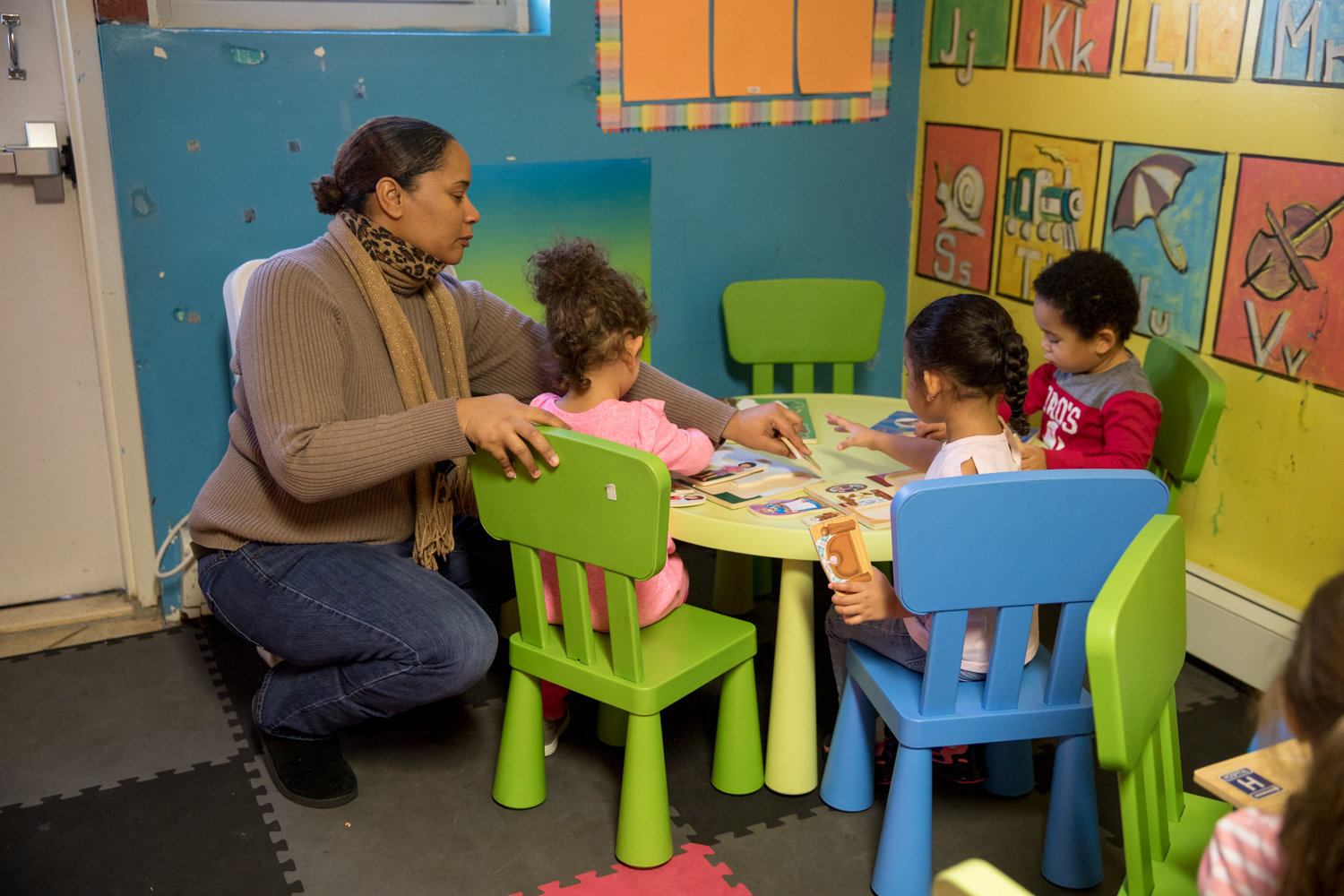 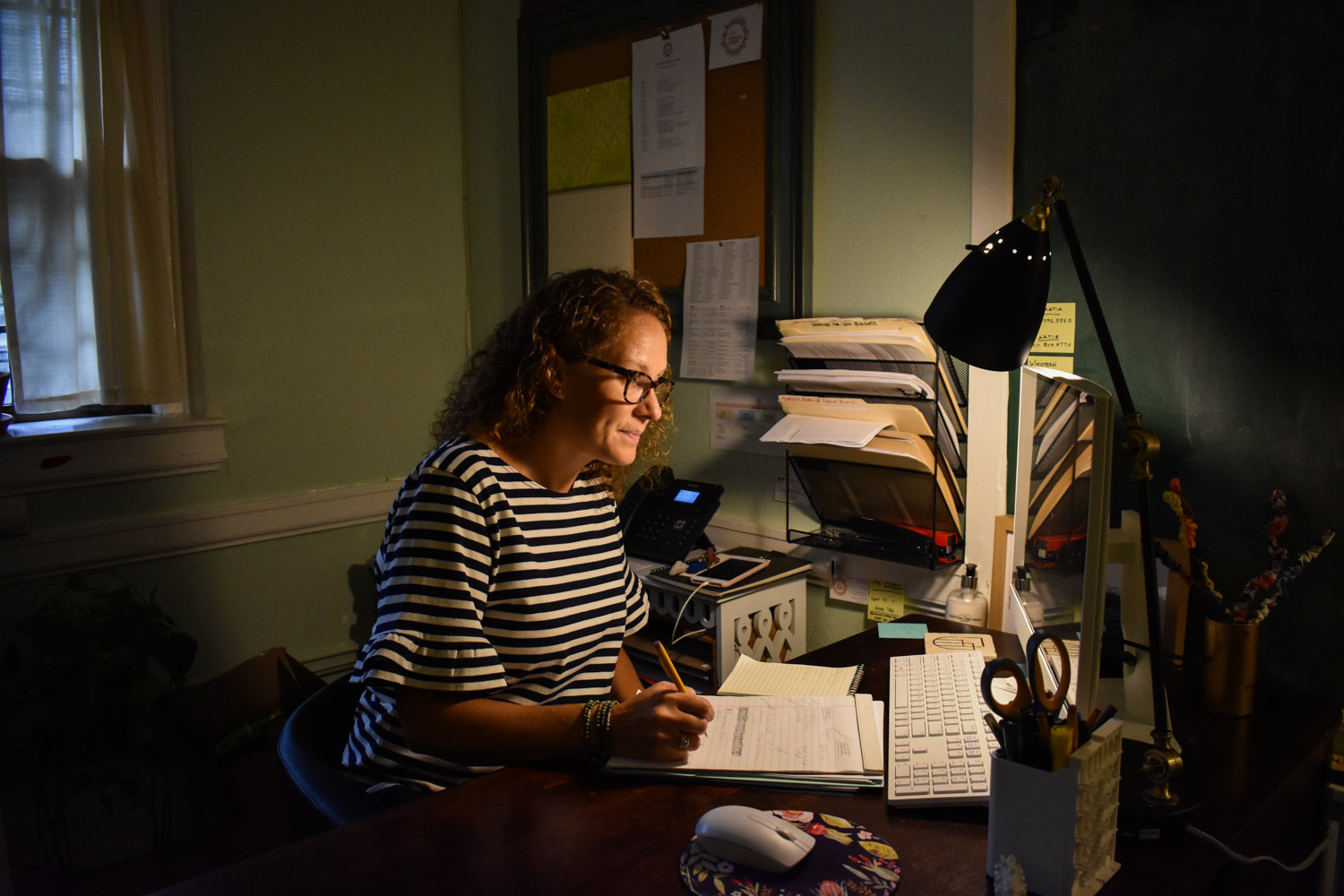 Riverdale Presbyterian Nursery School director Tara Mastin has found that universal pre-K doesn’t cover what it costs to run her program, which has caused her to raise rates in order to compensate.
KIRSTYN BRENDLEN / File
Previous Next
By KIRSTYN BRENDLEN

Looming over many prospective parents is the cost of sending their children to college. That could carry price tags of more than $50,000 per year — at least — and there’s only so much scholarship money to go around.

Yet, the price of parenthood — especially if both parents are looking to pursue careers — can be much more, and start much earlier. In fact, even in the Bronx, child care costs for infants and toddlers average more than $16,000 each year, according to a new study released by U.S. Sen. Kirsten Gillibrand. For older preschoolers, the price drops a bit, but only to about $11,000 a year.

And according to a 2015 report from the city’s public advocate, those costs are expected to rise about $1,500 anually.

Luiza Chiacu knows how expensive child care can be, and works closer with mom Rodica Chiacu to ensure their business — Rodi Daycare — stays on the affordable end of that spectrum for working parents.

“I’m not some bourgeois day care that charges $500 a week,” Luiza said. “All our parents are hardworking parents, like my mom was. They all work. They drop their kid off at 7 a.m., and some of them get picked up at 6 p.m.”

Rodica started Rodi Daycare in 2013, inspired by her own struggles to find an affordable, comfortable day care for her youngest daughter in the late ‘90s. She’s kept those struggles in mind over the years at Rodi.

“None of my parents are stay-at-home parents, none of them have nannies,” Luiza said. “They’re the ones dropping them off, getting here on time to drop their kid off so they can make their bus or subway to get to work in the city by 9 a.m.

Their biggest costs? Insurance and rent. That’s common in New York City because finding affordable care for young children — especially infants — is expensive in part because of insurance costs of and the kind of capital (or at least credit) needed to ensure buildings hosting day cares meet city standards for the care of young children.

“We’re not here to rip people off is our main thing,” Luiza said. “I’m not going to overdo it just so I can make more money.”

The bill would introduce three new grants that would fund quality child care centers on and off campus, and expand eligibility requirements for low-income student parents to receive child care subsidies.

Nubia Deleon is the mother of a 10-year-old son and an 18-month-old daughter. When her son was younger, Deleon’s family lived in Washington Heights, struggling to put together the pieces of his after-school care.

“There were places that you could place your child, but the arrangement was time, and who could take him was the most difficult part,” she said. “Where if he got out of school at a certain time, who can take him to these locations? You would have to pay another service to get him to that location.”

In the end, Deleon worked with a friend’s grandmother, who watched her son at home.

“Multiple locations would start at $250 and up,” Deleon said of the weekly costs. “And at that time, you start to think, I literally just need him for a few hours a day, and it’s $250.”

Starting over to find a day care for her daughter was nerve-wracking, Deleon said, and touring potential places in Riverdale was shocking in both cost and quality. She feared having to place her daughter in a facility she didn’t like, but was at least affordable.

She only needs care for her daughter for a few hours a day, she said, and Rodi charges $255 per week for part-time care — reasonable for Deleon based on the overall neighborhood. It’s a break for now. Next year, her son will start school at the Riverdale/Kingsbridge Academy, and she’s already searching for a decent after-school program to enroll him in.

“The reality is with children of this age that parents are already working, or beginning to go back to work,” Mastin said. “It helps for those families.”

Those costs are quite a bit lower than most rates for nannies or babysitters, Mastin said, based on her own experiences as the mother of two young children.

Charging for extended hours has another purpose for Riverdale Presbyterian: Funding for its core pre-K program. The premise of universal pre-K for families is great, Mastin said, but city funding is inadequate.

“It’s being provided to families for free, which is wonderful, and a must for many families,” Mastin said. “But somewhere it’s going to catch up. The quality is going to drop. And I don’t know when, or where, or how, but I fear that that is on the horizon if it’s not looked at very carefully.”