Community’s reservoir triumph may not be after all 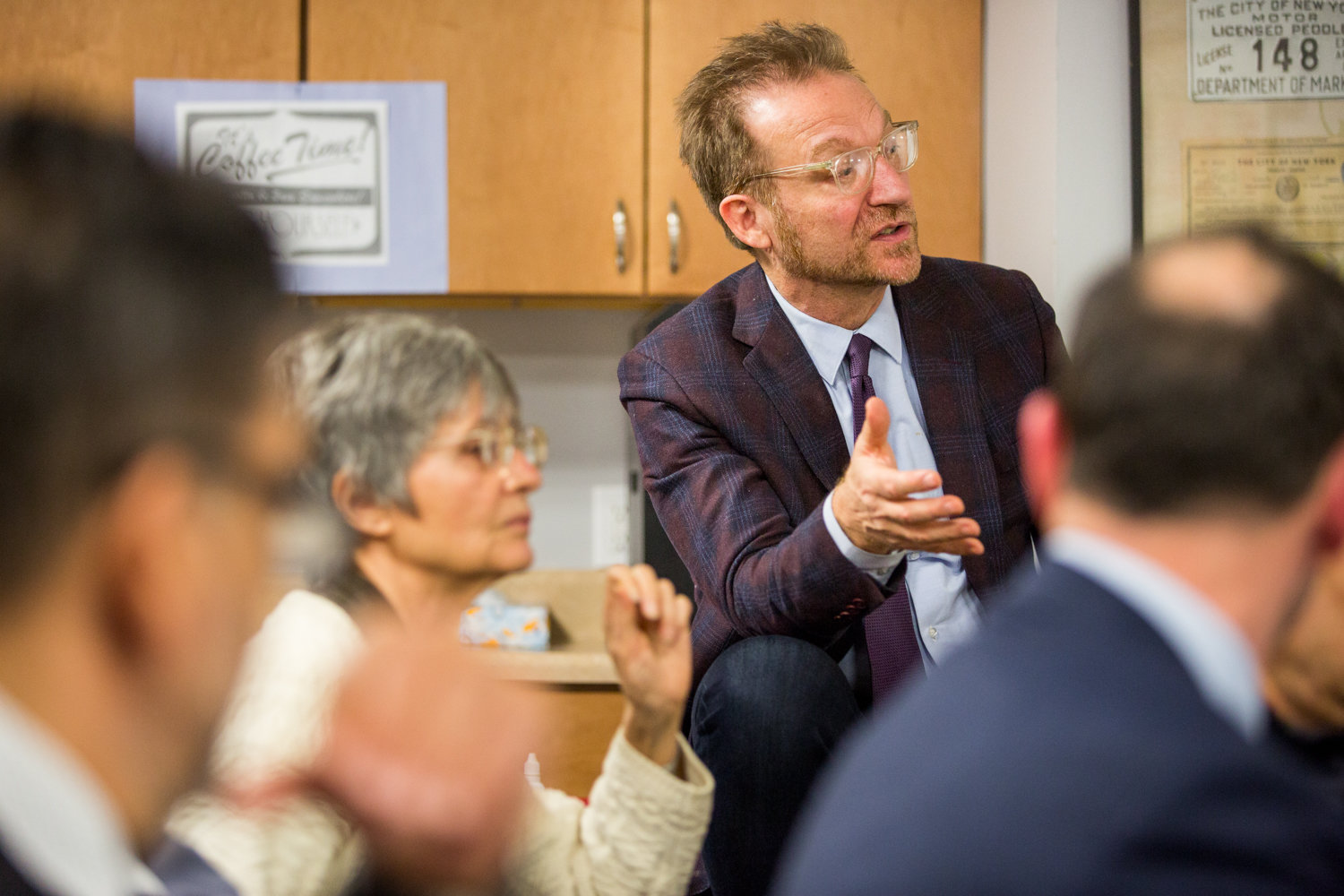 Community Board 8 environment and sanitation committee chair Robert Fanuzzi asks DEP representatives Michael DeLoach and Adam Bosch a question about the Jerome Park Reservoir during a meeting last week. CB8 and other community groups have fought to prevent the city’s environmental protection department from leaving one of the reservoir’s massive basins empty.
JULIUS CONSTANTINE MOTAL 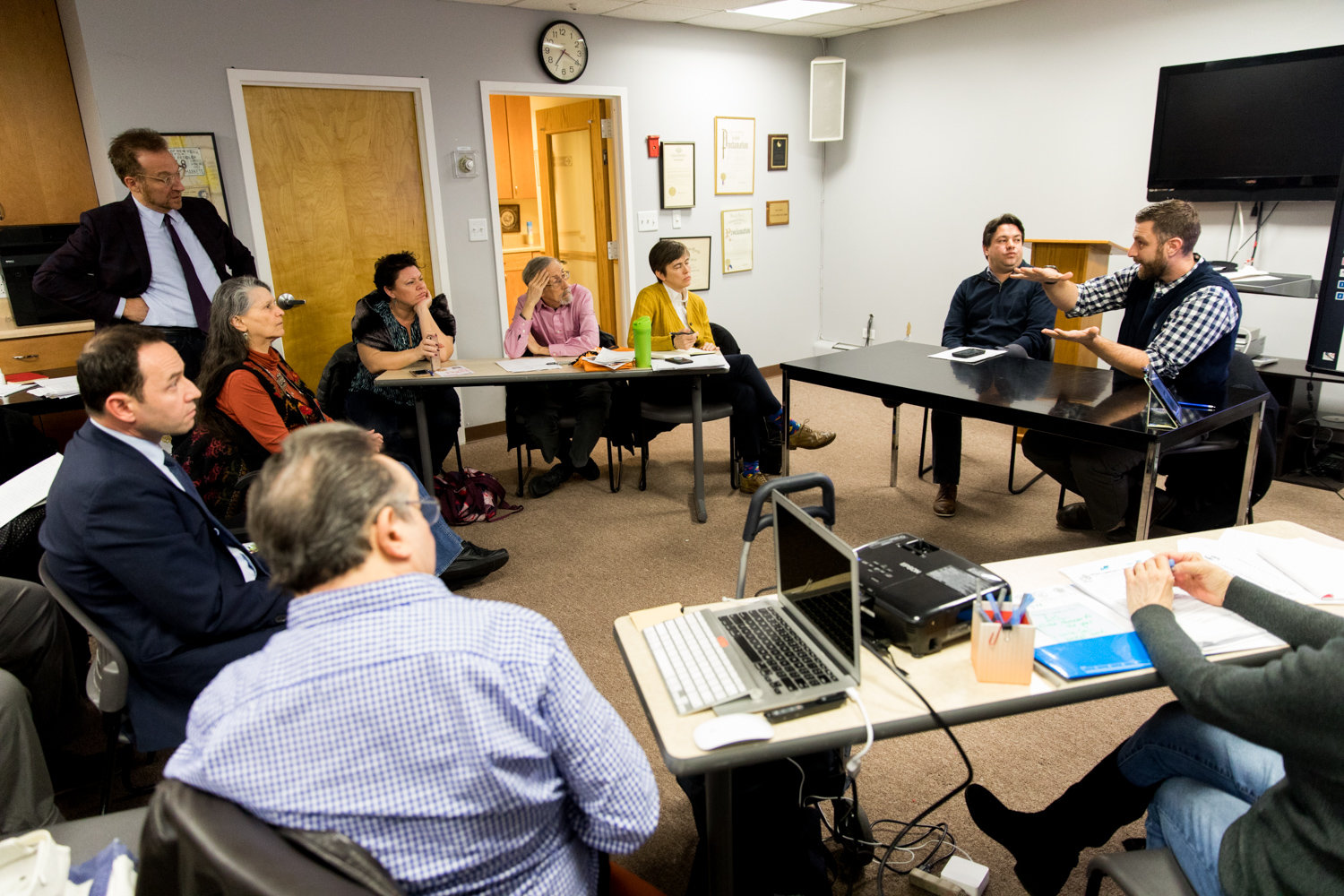 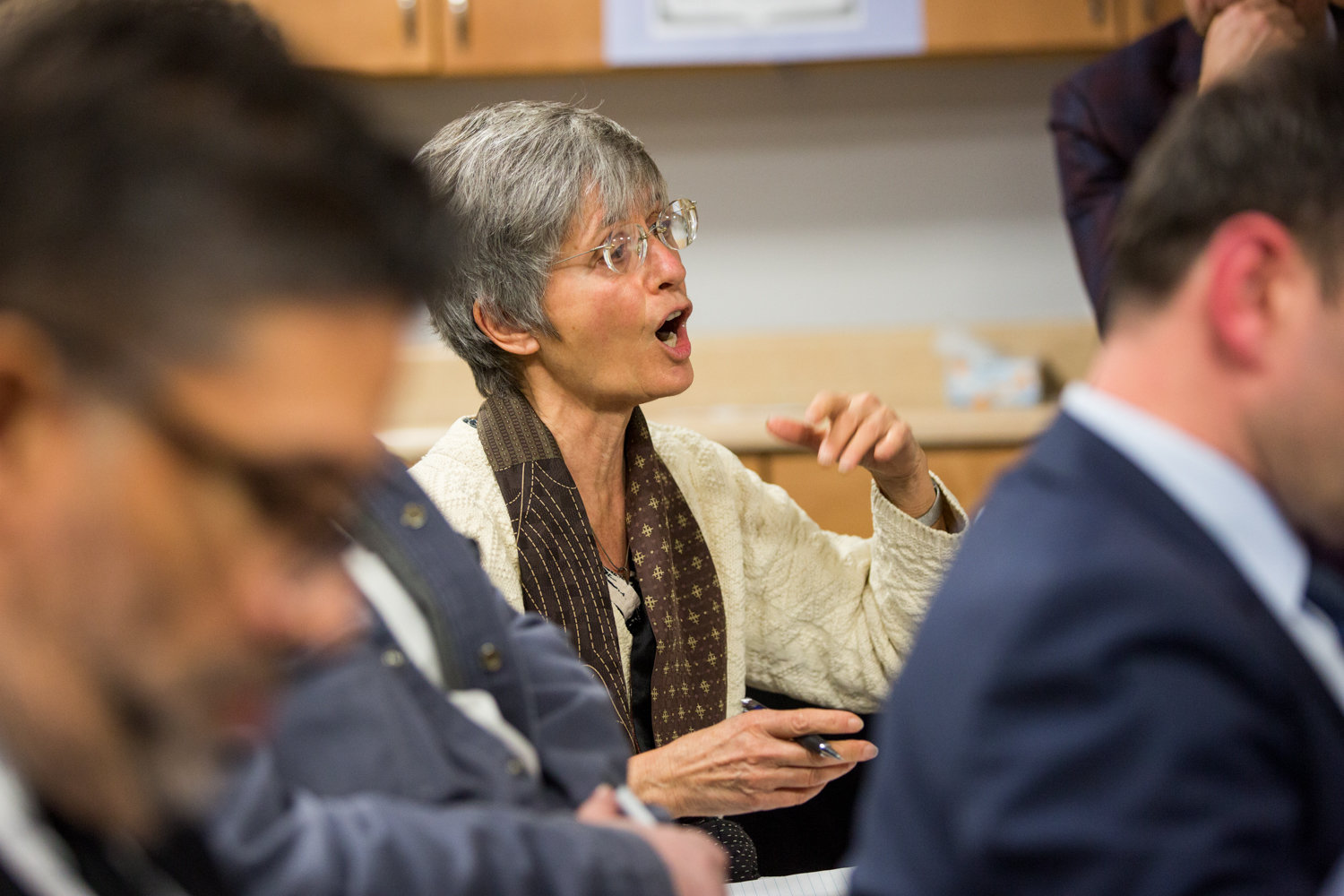 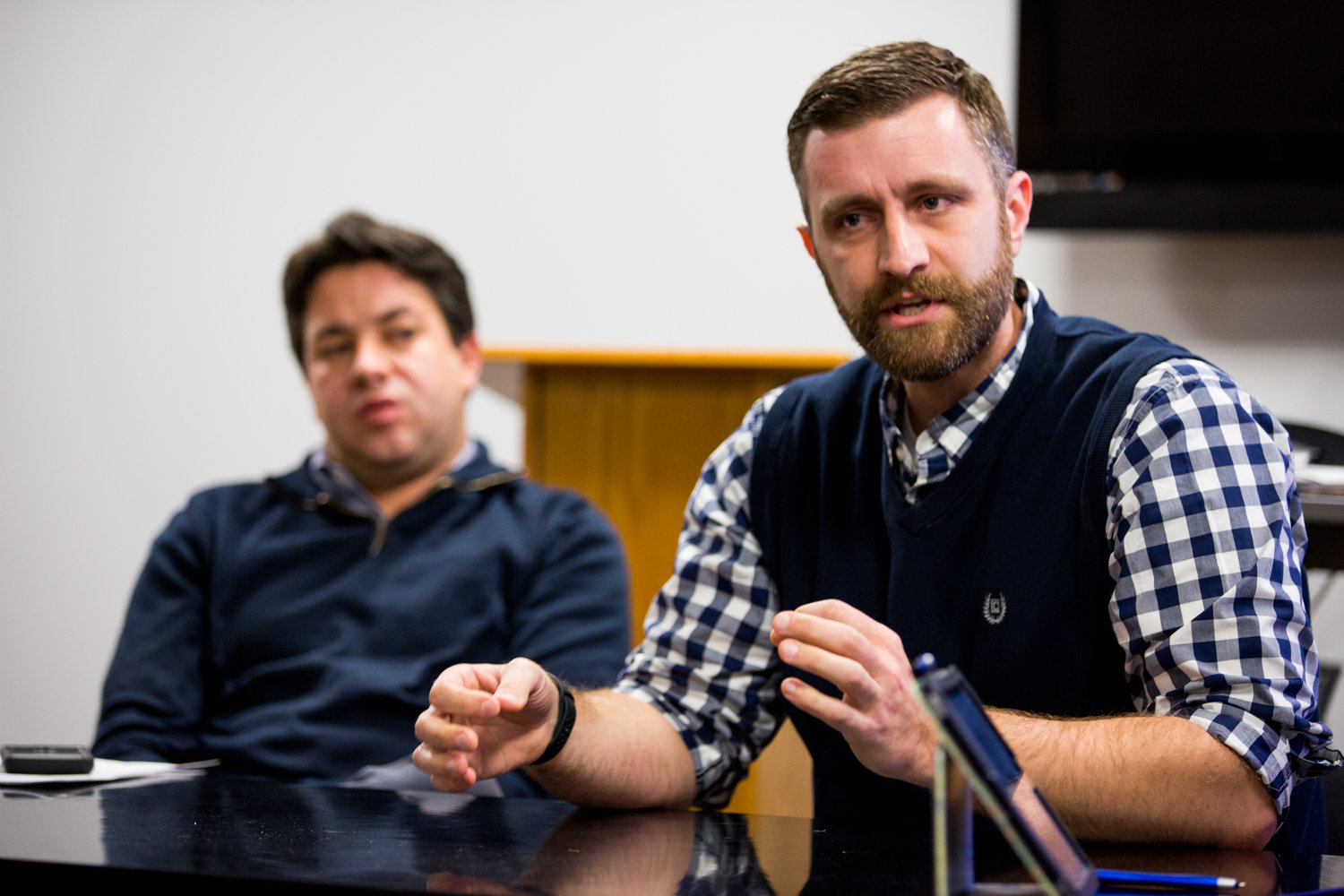 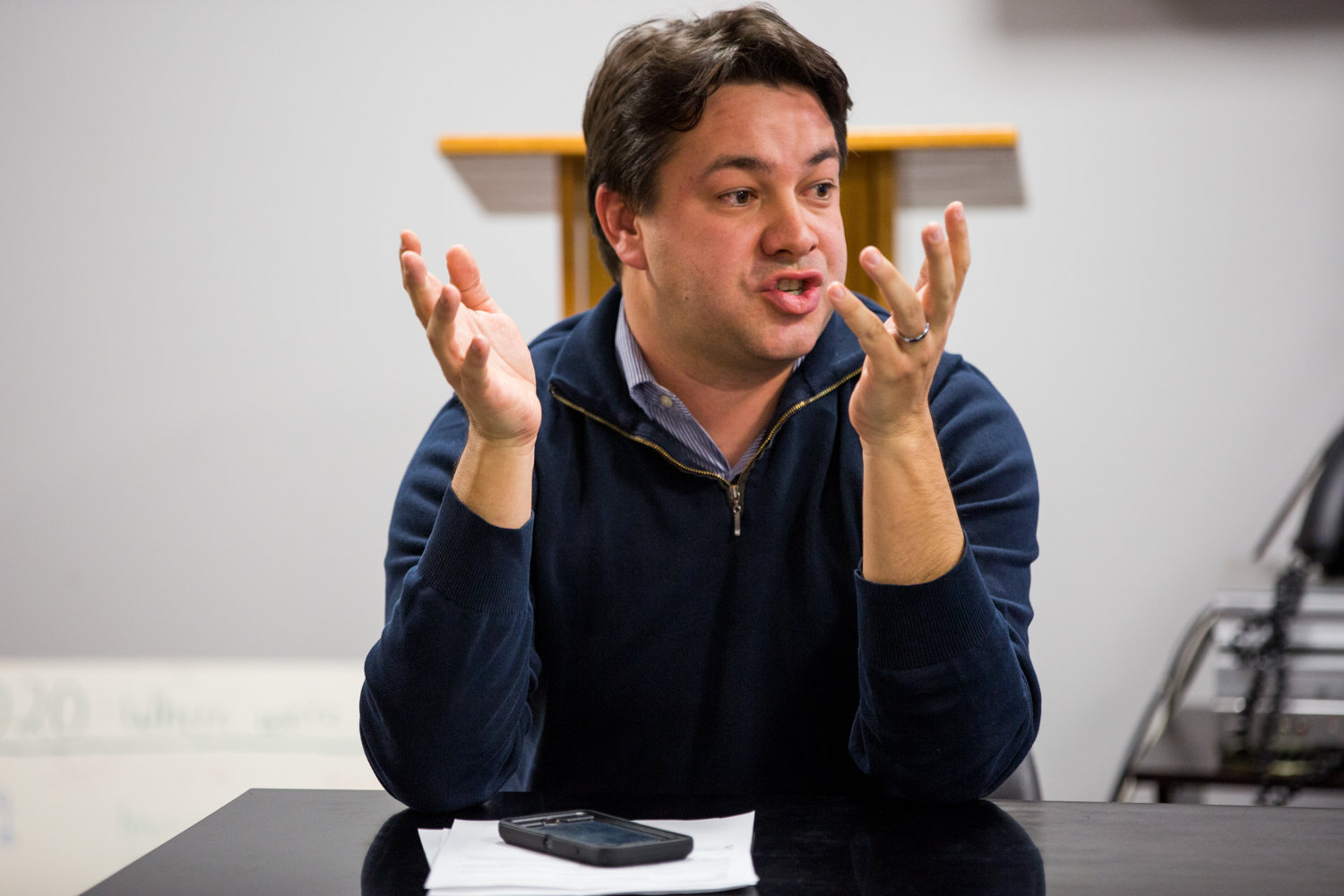 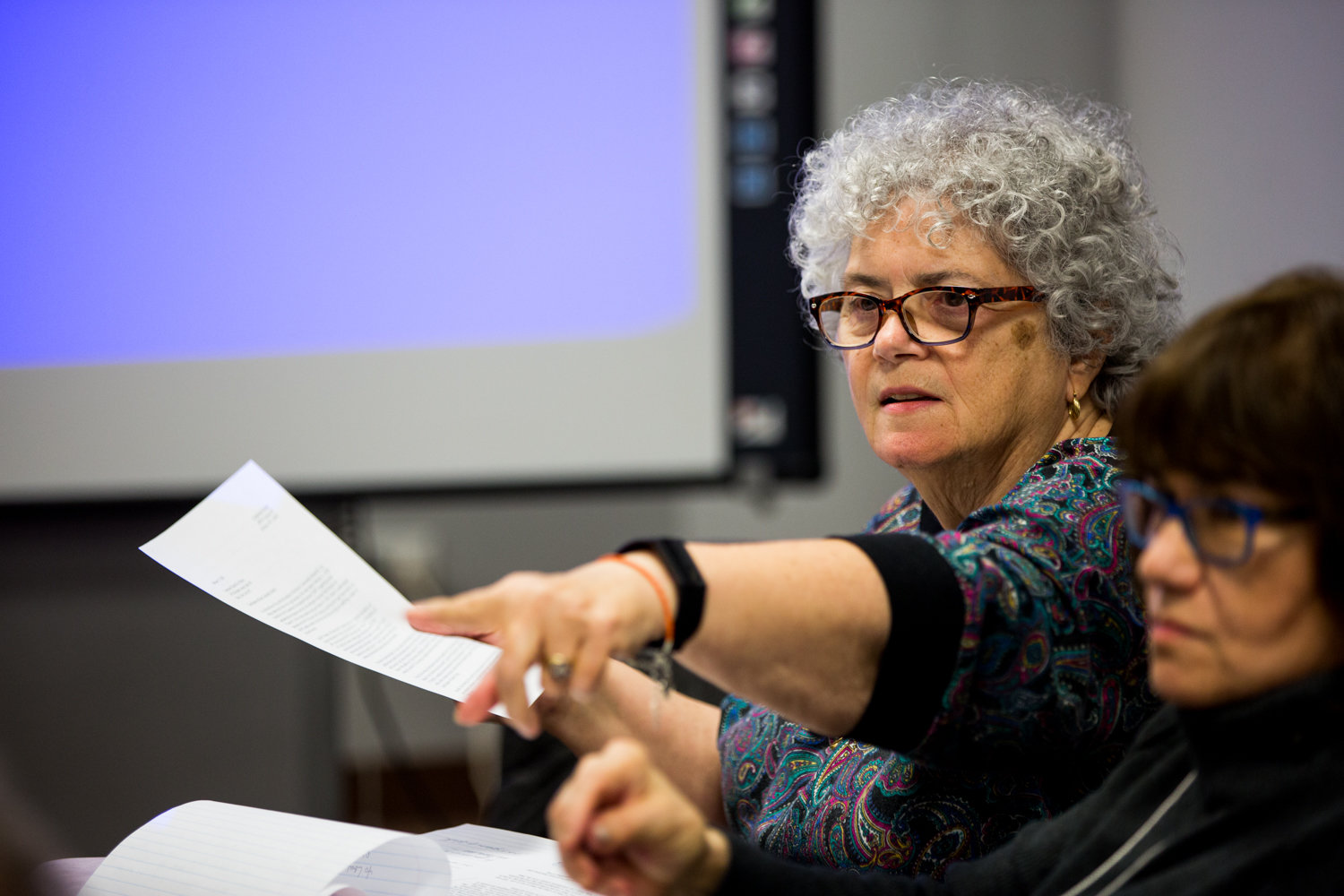 Karen Argenti speaks during a meeting last week of the environment and sanitation committee that largely dealt with the DEP’s handling of the Jerome Park Reservoir.
JULIUS CONSTANTINE MOTAL 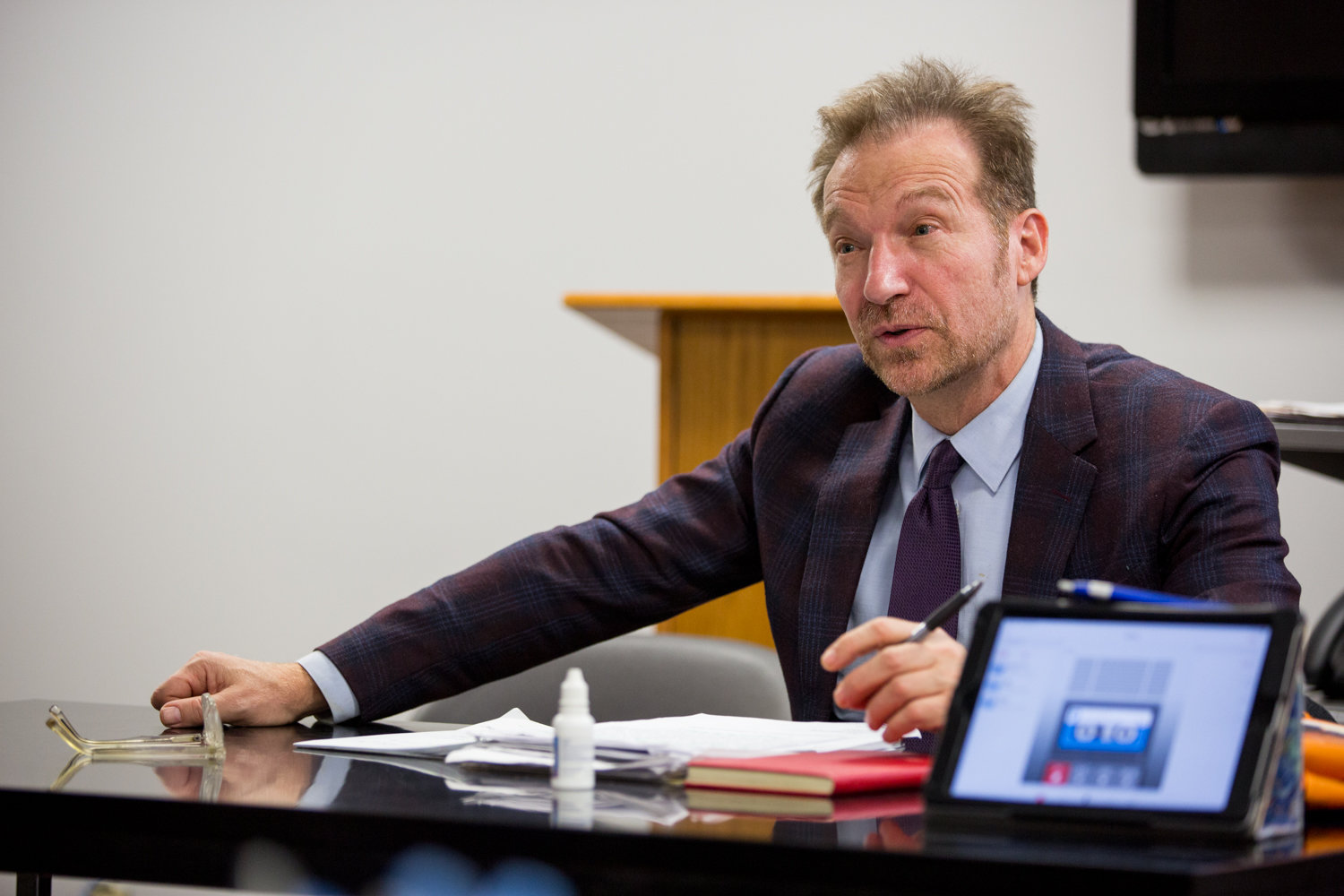 Nothing beats sitting down with someone you disagree with and having that long discussion to clear the air.

After months of asking the city’s environmental protection department to show up at a Community Board 8 meeting and answer questions about the Jerome Park Reservoir, they finally did.

But it’s uncertain if the resolution is one CB8’s environment and sanitation committee wanted to hear.

Both sides appeared at a Feb. 19 committee meeting. Its members and some vocal critics of the plan to keep the reservoir’s north basin dry had a list of questions. The city DEP representatives — communications officers Michael DeLoach and Adam Bosch — came ready with the reasons why their plan was necessary.

This is a battle that has been ongoing since last summer when DEP officials first came to CB8 with an announcement that they planned to keep the massive north basin dry, just in case the new Croton filtration plant at nearby Van Cortlandt Park lost power, and water rushing into the city from sources up north had someplace to go.

This didn’t sit well with many neighbors of the massive reservoir that separates Kingsbridge Heights from Norwood, who didn’t want their nice man-made water views replaced with acres of cement.

The reservoir is a national historic site because of its age and its place as an integral part of the city’s past. To keep the north basin dry and cover its hand-laid stone walls with sprayed concrete, neighbors argued, would alter the historic significance.

The neighborhood rallied to fight, sending a volley of calls and emails to the State Historic Preservation Office that initially gave its nod in response to DEP’s assurances this would have no negative impact on the reservoir.

It seemed to work. The state agency reversed its earlier approval Feb. 13. With that, neighbors opposed to DEP’s plan felt they got the win they’d hoped for. But, as many attending the committee meeting learned last week, that victory may be hollow.

Losing the support of the historic preservation office could affect the reservoir’s ability to receive federal or state funds. Yet, DEP revealed it didn’t take any money from federal or state sources.

Because DEP left the possibility open to getting outside funding, it may have seemed to many that the city used money from the state drinking water revolving fund, DeLoach said. Had they done that, critics said DEP’s plans would have triggered a review under the National Historic Preservation Act.

But absent that scenario, it’s unclear what alternatives the community has to slow or stop DEP’s plan.

Some extra room in the reservoir is necessary, Bosch said. The new Croton filtration plant was not built with a backup power supply. If electricity went out and the plant couldn’t process the water headed to it, there could be serious consequences.

Getting water from here to there

“The way we send water down through the Croton system is, it’s more or less all controlled from up at New Croton Reservoir up in Yorktown in Westchester County,” Bosch said. “We have two different intakes on that reservoir that can draw water into the aqueduct through a number of gates and valves that are at different depths throughout the full depth of the reservoir.”

That water travels the 24 miles from Yorktown to Jerome Park Reservoir, where it’s fed into the underground filtration system, processed and stored before it is pumped out to homes and businesses. If the power goes out in the Croton plant, it can’t filter water, Bosch said. That leaves DEP scrambling to find a place to put millions of gallons of gravity-fed water.

“So that water is coming at you and there is no place to stop that water,” he said. “Depending on the flow rate, you could have as much as 100 million gallons of water coming at you during that six to eight hours.”

More than 100 million gallons of water, by the way, is the equivalent of more than 5,000 swimming pools.

Committee members asked why the underground facility wasn’t designed with a secondary power source. A major reason is the space required to build it, Bosch said. Croton is the largest energy consumer in the system. The second largest, the Catskill Delaware ultraviolet disinfectant facility in Westchester County, has two generators there the size of school buses, housed in a room the size of a football field.

“So you’re talking about backup energy for a plant that’s about 24 megawatts of electricity going to Croton filtration plant,” he said. “You’re talking essentially about building a small power station to power that, and that would require more excavation, really complicated ventilation.”

Having room in Jerome Park, which could hold about 80 million gallons, is a practical solution for DEP, Bosch added.

But when pressed on when DEP knew this was a problem, Bosch said engineers began talking about the Jerome Park option as early as 2015.

From the audience, Bob Cooney asked why the city was citing space and cost concerns while also talking about public safety. A retired engineer, Cooney was the person who first brought DEP’s plans to the community board’s attention last year.

The conversation didn’t take on urgency until the 2018 transformer fire that gave the city’s skyline a greenish glow, Bosch said. City engineers determined that a similar outage would bring the Croton filtration plant’s operations to a screeching halt. Even more, moderate fluctuations in the power going to the filtration plant would cause interruptions.

At that time, DEP made an operational decision to keep the north basin dry, DeLoach said. That decision wouldn’t be subject to the same rules as a physical change like rehabilitation to the reservoir walls. To be certain, DEP got the all clear from the city’s legal department.

CB8 was kept in the dark purposefully, committee chair Robert Fanuzzi said. To him, it seemed strange the city would spend almost a decade designing the Croton filtration plant while ignoring the power problem.

“I do have questions about who do you answer to for the electrical integrity of a plant like that,” he said.

“This was absolutely not known, else we would not have passed that resolution,” she said. “I think that it’s been a very disingenuous process.”