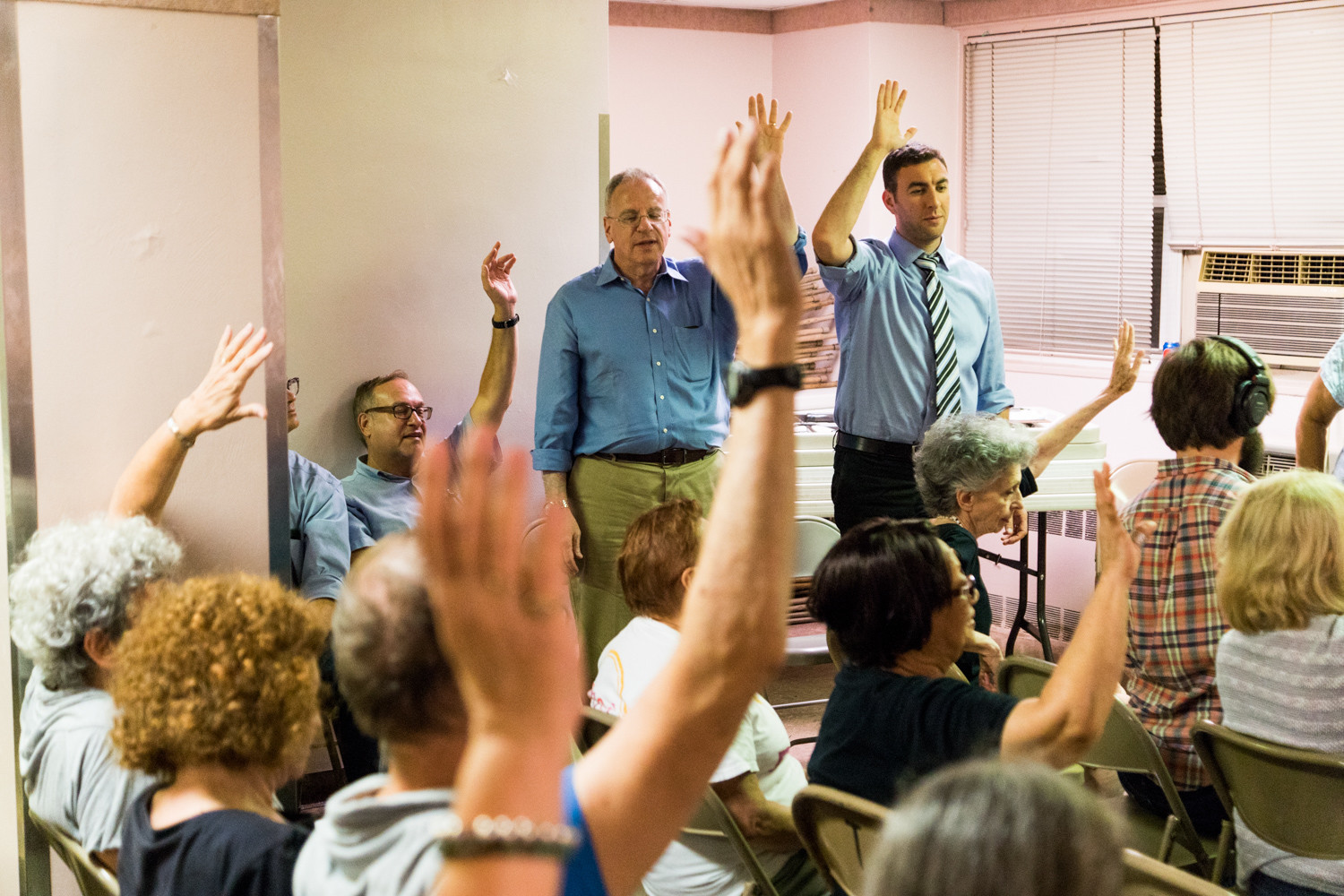 Despite several fierce debates about the values and disadvantages of a constitutional convention, the final vote among members of the Benjamin Franklin Reform Democratic Club wasn’t even close: 30-2 against the convention.
Julius Constantine Motal 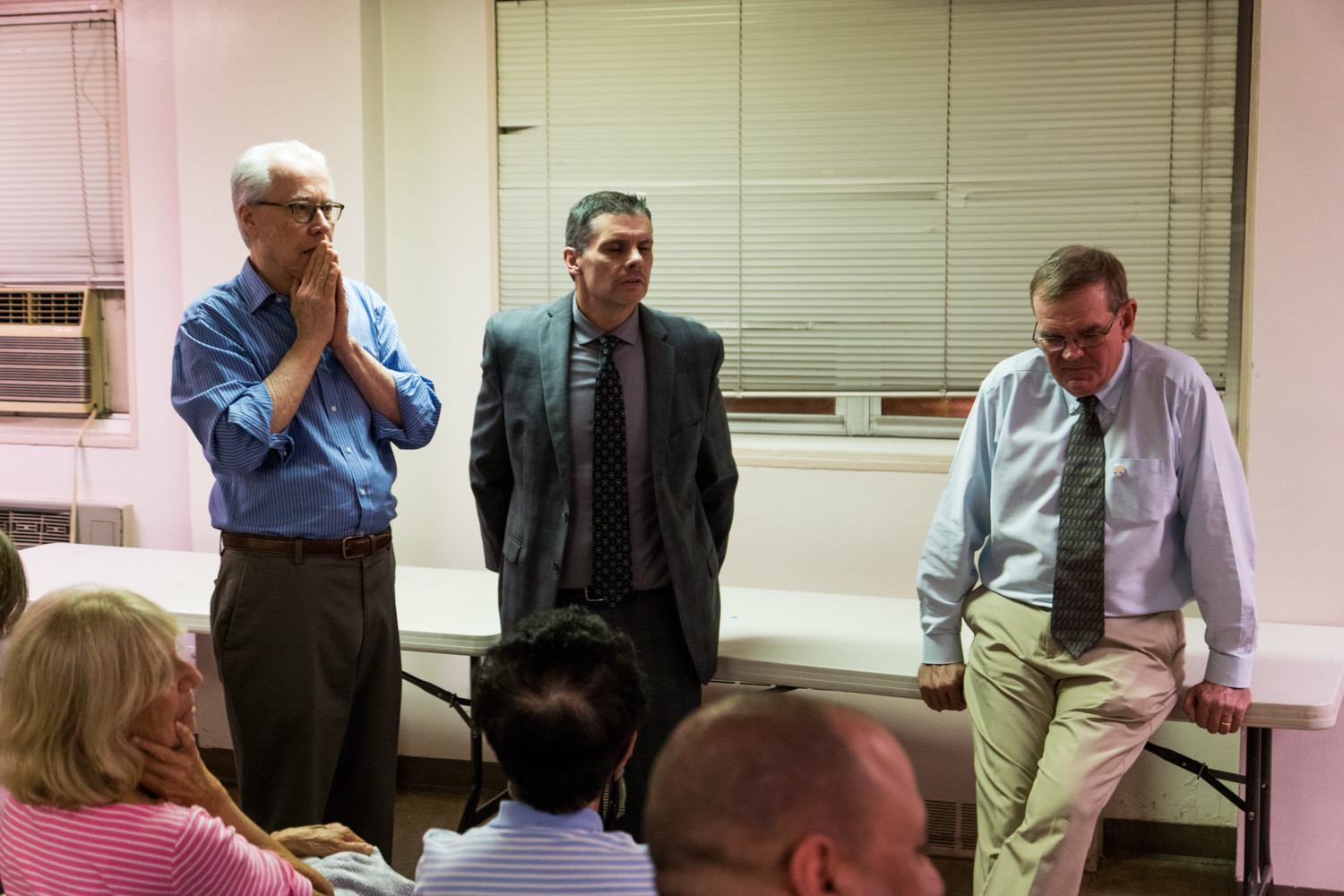 Paul Egan, center, and Tom Bergdall listen as Priscilla Grim attempts to ask a question regarding the risks and benefits of a constitutional convention.
Julius Constantine Motal 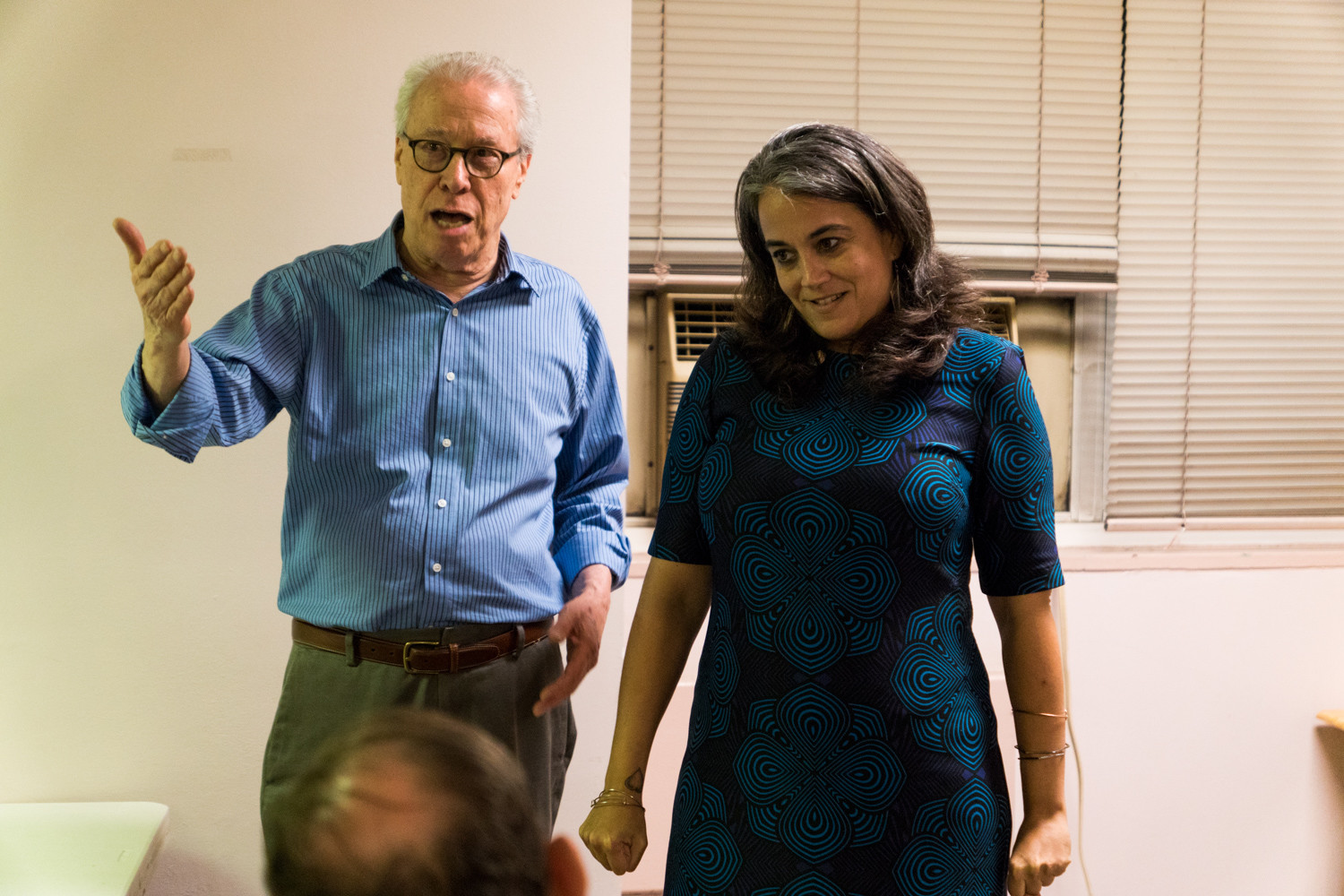 Priscilla Grim, a member of Citizens Union, waits to make a statement as people keep interrupting her. She had also interrupted a few speakers and found herself in a shouting match with Community Board 8 member Marvin Goodman.
Julius Constantine Motal
Previous Next
What’s a con-con?

New Yorkers get the chance to vote on whether they want to hold a constitutional convention every 20 years without fail.

It is one of just a few states that automatically grants that right to voters, but the last convention that opened in New York was in the 1960s, with voters not ratifying a new constitution since 1938.

Those with political experience on both sides of the aisle have lobbied against modern conventions, warning primarily of how much of state law can be changed by a single gathering of delegates.

If a convention is approved, voters next year will elect three delegates from each senatorial district along with 15 at-large delegates. Those newly minted constitutional delegates would be tasked with drafting a new state constitution.

In the end, a third referendum would happen in 2019 for voters to decide whether to ratify the various packages the constitutional convention proposes.

The process leaves much up for grabs, including securing equality for women and transgender people. But there also are some risks, according to detractors, like the state’s Forever Wild project, which protects New York’s major ecosystems like the Adirondacks.

There wasn’t much agreement at last week’s meeting of the Benjamin Franklin Reform Democratic Club.

In fact, most of the two-hour meeting was drowned in shouting matches between representatives from Citizens Union — an activist group rallying support for a referendum on whether the state should hold a constitutional convention — and some of the tried and true Democrats of the northwest Bronx.

Both Tom Bergdall of Citizens Union and Paul Egan of the United Federation of Teachers — along with the questioners and commentators that followed them — told a story about a dysfunctional state government in Albany, a federal government in Washington that threatened the liberal existence of New York as a liberal bastion, and the desperate need for a fix.

It was, however, which magic pill would fix those issues they really disagreed on. Bergdall and his Citizens Union colleague Priscilla Grim said New York needed a radical approach: Hold a constitutional convention, and make the necessary changes to government.

A constitutional convention — which automatically appears on New York state ballots every 20 years — would mean electing 204 delegates to go to Albany and rewrite the state’s constitution.

The convention has been touted by advocates as a fast way to make necessary changes to government codified within the constitution, adding long-advocated laws like same-day voting registration and ethical reform for elected officials. And while lawmakers themselves could be named as delegates to the convention, this process would bypass the Assembly and senate in Albany who Bergdall and Grim say haven’t been getting the job done.

“It’s not going to be any different whether you take the long road or the short road,” Bergdall said. “The existing politicians like things the way they are.”

Egan and some of the Ben Franklin Club’s opponents of the referendum — which will appear as the largest ballot item this November — would like a different approach, one they have been touting for years: Elect more Democrats.

“Let’s imagine this like a game of poker — let’s take all of our rights and put them all in the middle and hope that they all come back on the other side,” Egan said. “Why aren’t we going to the current politicians and telling them what we want? It is just a massive risk.”

But the disagreements at the Sept. 27 meeting weren’t just ideological. In many cases, they got very personal.

That was especially true for Grim, who got into several intense shouting matches with Ben Franklin Club members, including Assemblyman Jeffrey Dinowitz and Community Board 8 member Marvin Goodman. A fierce advocate for a “yes” vote in November, Grim interrupted several people during the questions section of the meeting — namely Goodman — a few times. During the same session, Grim was shouted down by members of the club for trying to make a comment instead of asking a question.

At the time, Goodman — who had previously tried to make a comment but was told he couldn’t by the meeting’s moderator — joined in on the shouting.

“If I wasn’t allowed to make a comment, why can she?” he shouted.

By the time the meeting opened for comments, Grim volunteered to speak for the convention, but was interrupted and, again, shouted down by club members who said she couldn’t make a statement, since she wasn’t a member of the club.

Grim said she had never felt she had a voice in government before, “So why should I now?” But the most serious moment of the meeting came when Dinowitz — typically known for his sarcasm and wit, though not his temper — finally had enough being interrupted.

“You are in our house,” the assemblyman yelled as he stepped toward Grim. “You will behave.”

In the end, though, it seemed all of Grim’s efforts to impose her ideas on the Ben Franklin Club were in vain. The club — which often is touted as one of the most influential and active political clubs in the Bronx — voted 30-2 against endorsing the constitutional convention.

Given Egan’s comments earlier in the night regarding the dismal 14 percent voter turnout in citywide primaries Sept. 12, there is no telling how many people will actually show up to the polls in November. But it is certain the vast majority of Ben Franklin Club voters who do make it to the polls won’t be looking to support Bergdall’s “magic pill.”