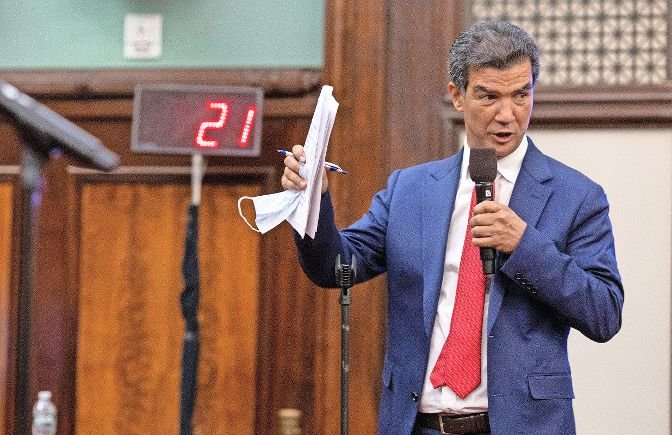 Councilman Ydanis Rodriguez called New York City’s decision to grant non-citizens the right to vote a historic moment. But whether such a measure actually becomes law is not only up to Mayor Bill de Blasio, but also quite possibly his successor, Eric Adams. And, of course, the courts.
Courtesy of John McCarten/NYC Council Media Unit 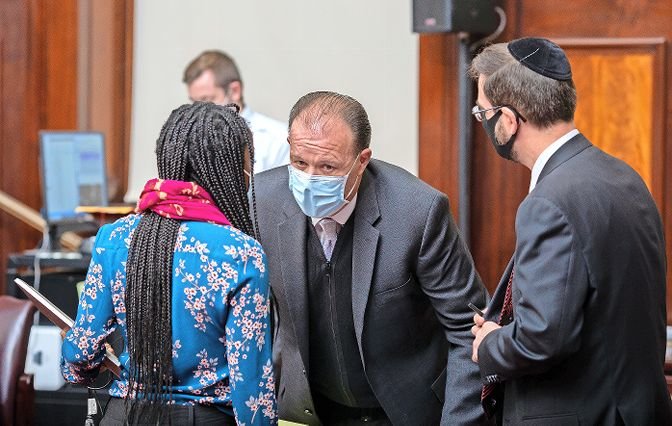 Councilman Mark Gjonaj voted against a bill that would provide 800,000 immigrant non-citizens the right to vote, fearing the 30-day window for someone to earn that right after arriving in the country was too short. He pushed to send the bill back where it came from, but ultimately failed.
Courtesy of John McCarten/NYC Council Media Unit
Previous Next
By ETHAN STARK-MILLER

The city council has made history, passing a bill that aims to give the roughly 800,000 immigrant non-citizens living in New York City the right to vote.

While casting his “yes” vote for the bill in the council chamber last week, lead sponsor Councilman Ydanis Rodriguez said what he and his colleagues were doing was “making history.”

“In one of the most diverse cities in the world, we need to ensure that there is adequate representation for all New Yorkers,” Rodriguez said. “Let’s start by expanding the scope of who is allowed to vote in our local elections.”

The Our City, Our Vote bill is intended to extend voting rights to lawful permanent residents — green card holders, those here on work permits and those covered under the federal Deferred Action for Childhood Arrivals program — for local city elections. That includes races for mayor, comptroller, public advocate, borough president and city council, as well as any citywide ballot initiatives.

For Rodriguez passing this bill was personal. He immigrated to the city from the Dominican Republica in 1983 and didn’t get the right to vote until he gained citizenship in 2000.

Our City passed 33-14 with another “yes” vote from Councilman Eric Dinowitz, who also signed on as a co-sponsor. Although Councilman Fernando Cabrera moved the bill out of a committee he chairs, the outgoing lawmaker wasn’t present for the full-floor vote.

The bill comes at a time when several other states — like Florida, Alabama and Colorado — have passed ballot measures restricting voting rights for non-citizens.

Rodriguez is hardly the first council member to try and grant voting rights to the city’s non-citizens. The bill, which he first introduced two years ago, was based heavily on prior legislation from Queens councilman Daniel Dromm and Manhattan councilwoman Margaret Chin.

It’s also been championed for the past decade by the New York Immigration Coalition, a group of more than 200 immigrant and refugee rights organizations around the state.

Councilman Mark Gjonaj — who represents parts of the east Bronx — spurred two hours of spirited debate when he introduced a motion to send the bill back to committee. Gjonaj was concerned the bill’s residency requirement of 30 days was too short and immigrants should have to live here for at least a year before getting the right to vote.

“What this bill is going to allow a year from now is someone with a work visa to come in, and 30 days later, be able to vote,” Gjonaj said. “That person is a transient — not a permanent resident, not a contributor to society in the fabric of New York City. That person is coming in for the duration of that job of that project, and going back to their home country or another place of origin.”

Although Gjonaj’s motion was ultimately defeated, he wasn’t the only council member to raise objections. Brooklyn councilwoman Laurie Cumbo, who supported Gjonaj’s motion, said she was worried that giving 800,000 non-citizens the right to vote could potentially dilute the power of an essential Democratic Party voting bloc.

“My concern is how this is going to impact African American communities,” Cumbo said. “We can’t leave that up to circumstance. This is a very vulnerable group in the city of New York that has sacrificed for every single person in this room. So, I vote ‘yes’ because I reserve my right to ask more questions to make this a more effective bill.”

Gjonaj’s objections to the 30-day requirement are misplaced, Rodriguez said, because a majority of those who’ll get the right to vote are lawful permanent residents. Plus, those who’ve been here for shorter periods of time were the ones keeping the city running during the coronavirus pandemic.

And to Cumbo’s concerns about diluting the African American vote? Roughly half of the immigrants who’ll benefit from this bill are of African descent, the councilman claimed.

While Mayor Bill de Blasio has said he won’t veto the bill, he’s concerned the city doesn’t have the legal authority to grant voting rights. It will most likely be up to Mayor-elect Eric Adams whether to sign the bill into law when he takes office next month. Adams has indicated he supports allowing green card holders to vote, but shares de Blasio’s concerns about legal jurisdiction to grant such a right.

Rodriguez is an outgoing councilman, so this will be one of his last pieces of last legislation. He hopes its impact will be far-reaching and long-lasting.

“New York City must be seen as a shining example for all the progressive cities to follow,” Rodriguez said. “My hope is that 50 years down the line when our children look back and we will not be here, they will see a diverse coalition of fighters who came together to change New York City history by giving immigrant New Yorkers the power of a ballot.”