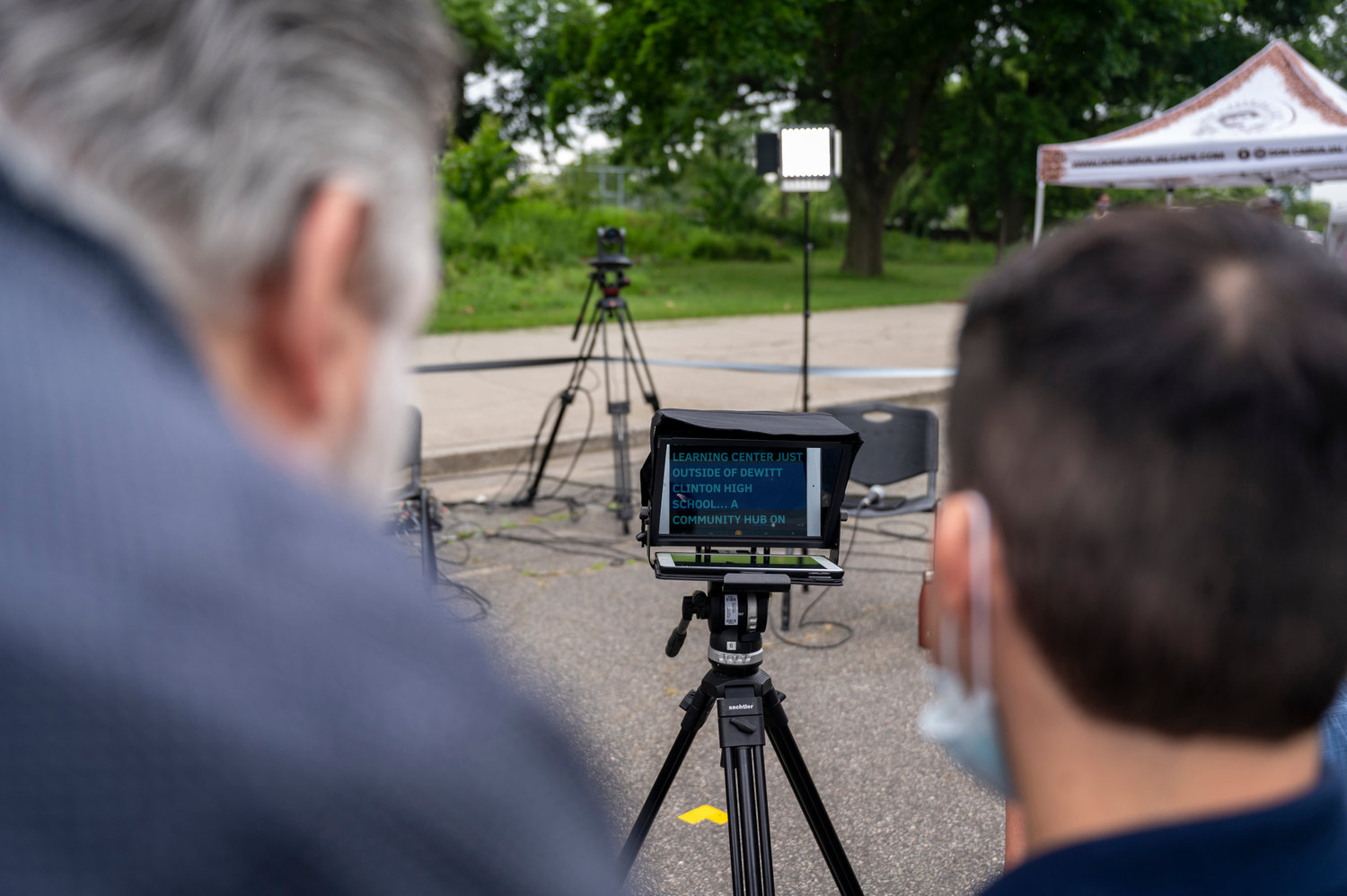 The Riverdale Press and BronxNet gets together to host a city council candidate forum next to DeWitt Clinton High School, set for broadcast later this week. This is one of the last times the candidates will get to openly challenge incumbent councilman Eric Dinowitz ahead of the June 22 Democratic primary.
HIRAM ALEJANDRO DURÃN 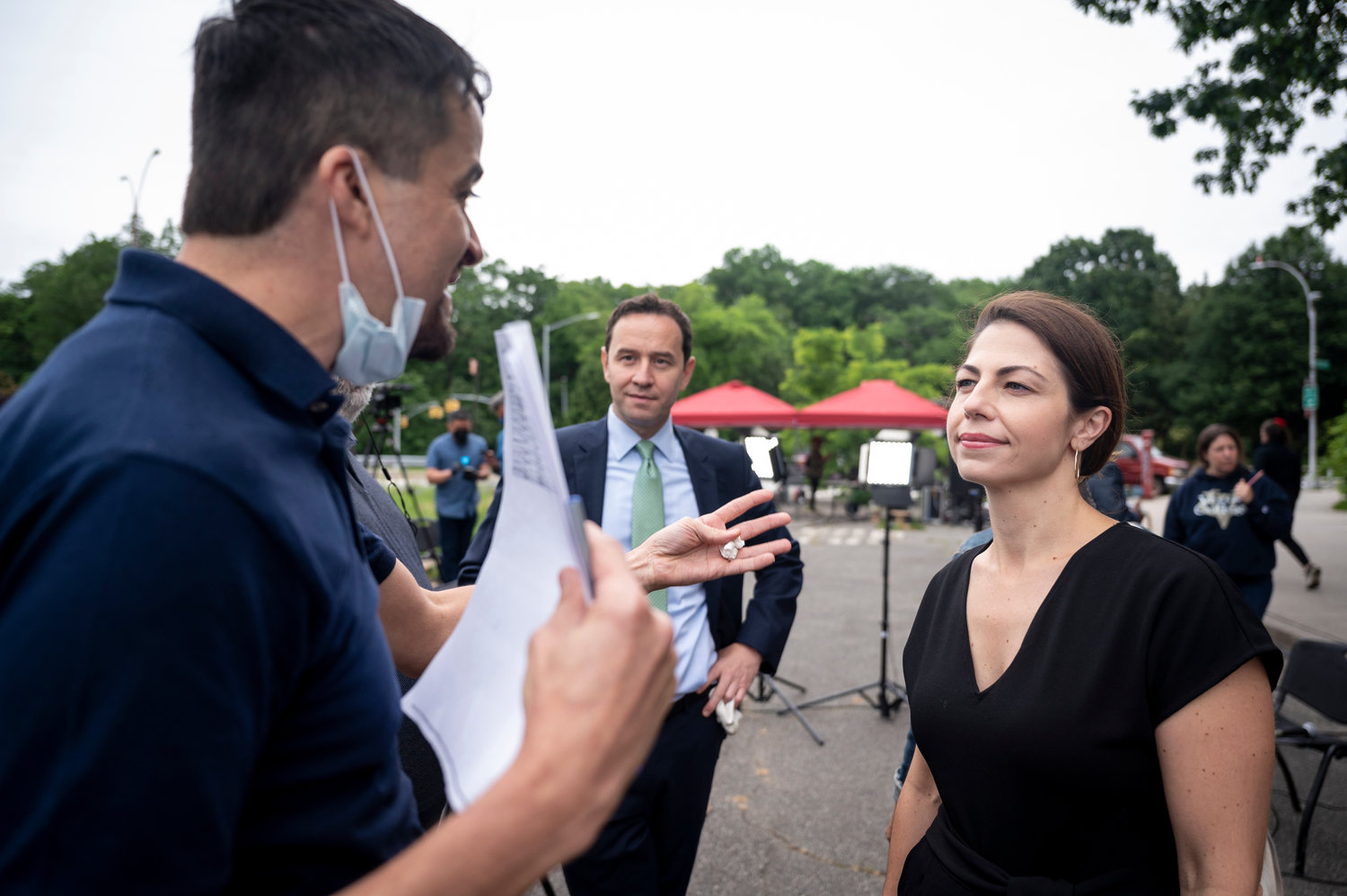 Social worker Abigail Martin and attorney Dan Padernacht both say they would address the lack of transparency from the city’s education department if they’re elected to the city council. The two squared off against incumbent Eric Dinowitz and two others in what is expected to be the final candidates forum ahead of the Democratic primary on June 22.
HIRAM ALEJANDRO DURÁN 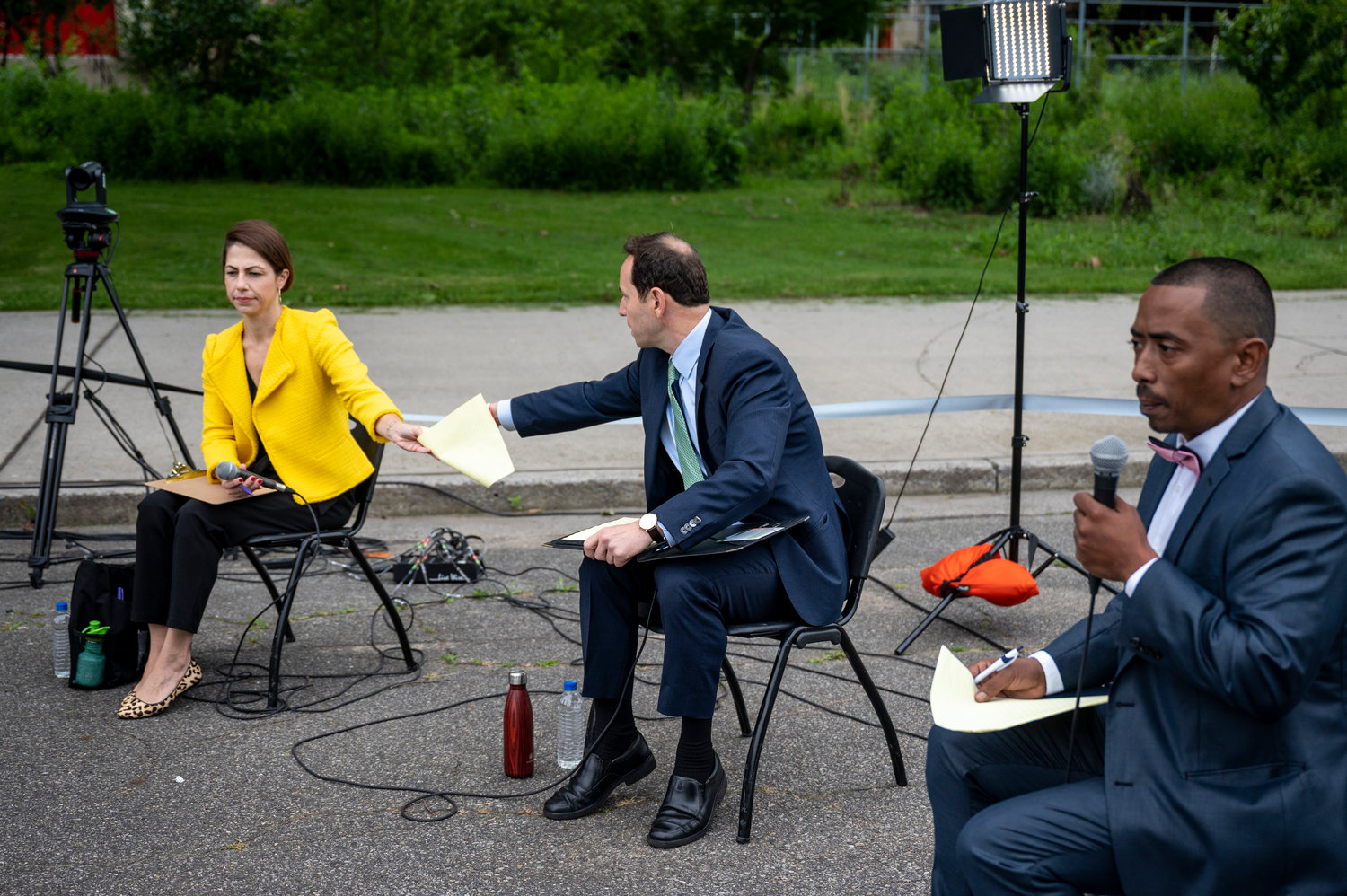 Marcos Sierra, Abigail Martin and Dan Paderncht all targeted Mino Lora in a recent candidates forum hosted by BronxNet and The Riverdale Press for her alleged support of a controversial rezoning plan in Manhattan’s Inwood neighborhood. All of them are competing in the June 22 Democratic primary to represent this corner of the Bronx for the next two years.
HIRAM ALEJANDRO DURÁN 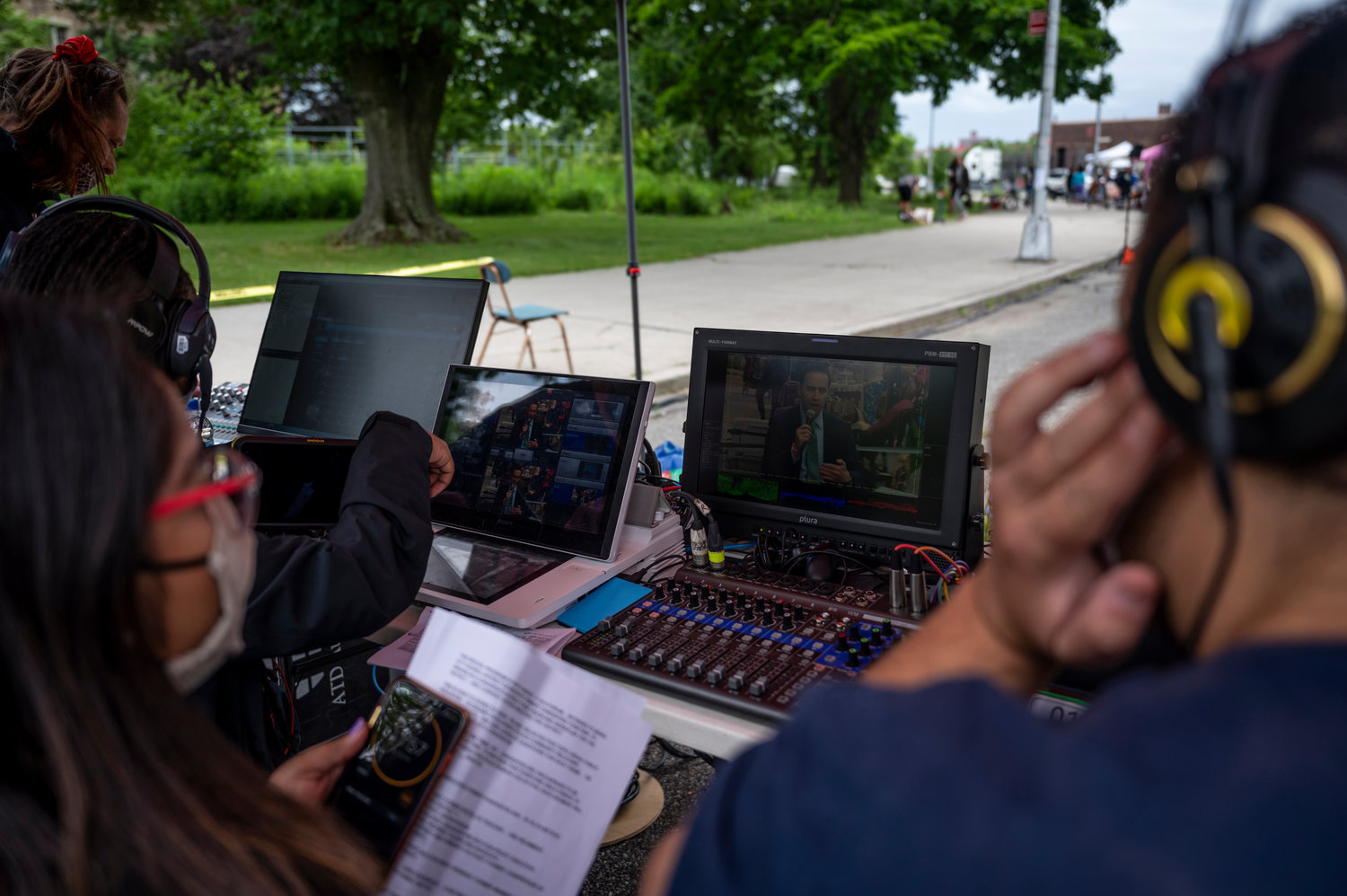 The candidates running against incumbent councilman Eric Dinowitz sparred in a recent forum co-hosted by BronxNet and The Riverdale Press just outside of DeWitt Clinton High School. This is expected to be the final time the candidates will get to debate the district’s issues ahead of the Democratic primary on June 22.
HIRAM ALEJANDRO DURÁN 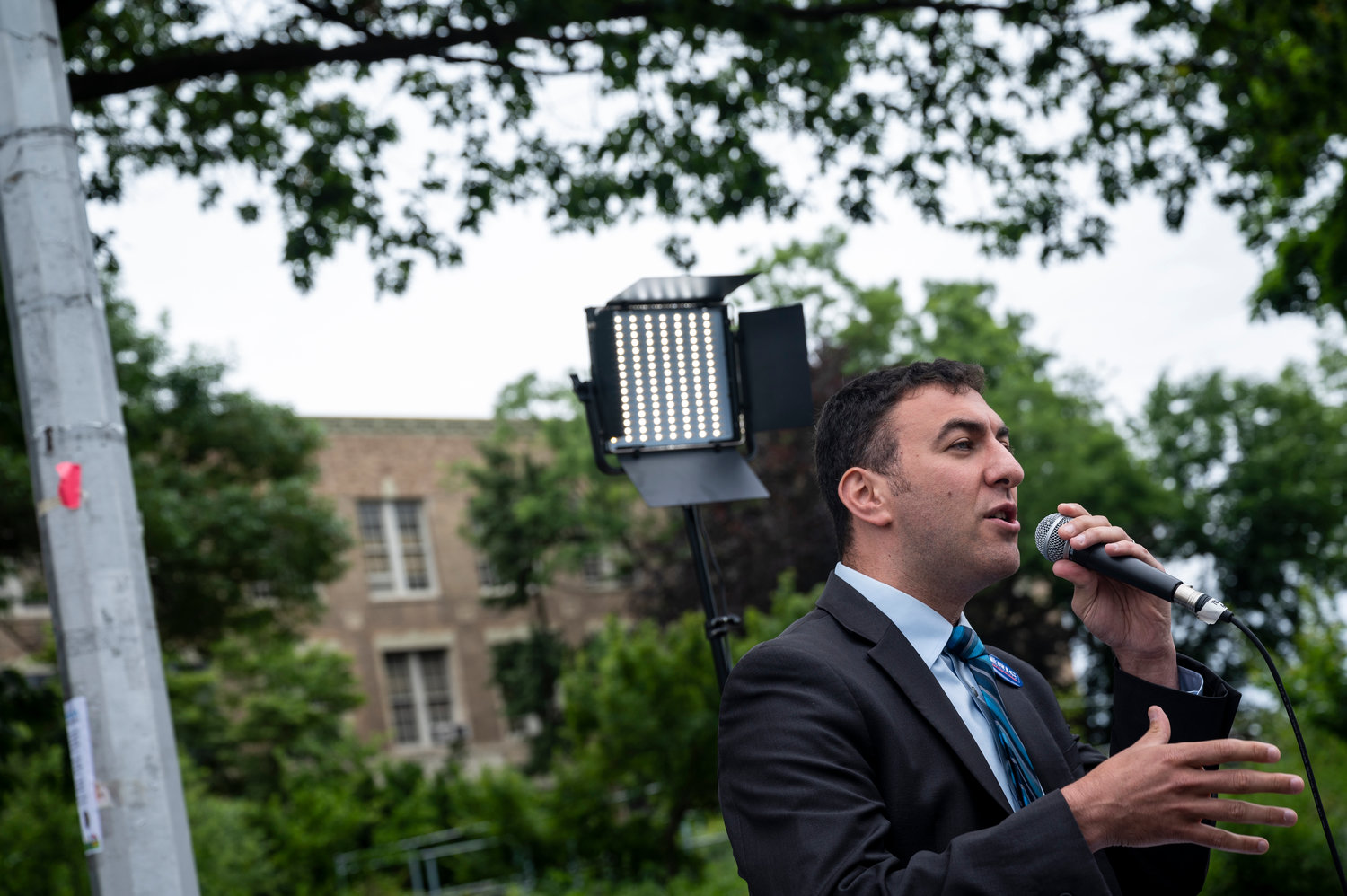 Councilman Eric Dinowitz said his office has intervened and stopped DeWitt Clinton High School from evicting the James Baldwin Order Learning Center from its campus. However, many of his challengers in the June 22 Democratic primary say he’s declaring victory before any victory is actually had.
HIRAM ALEJANDRO DURÃN 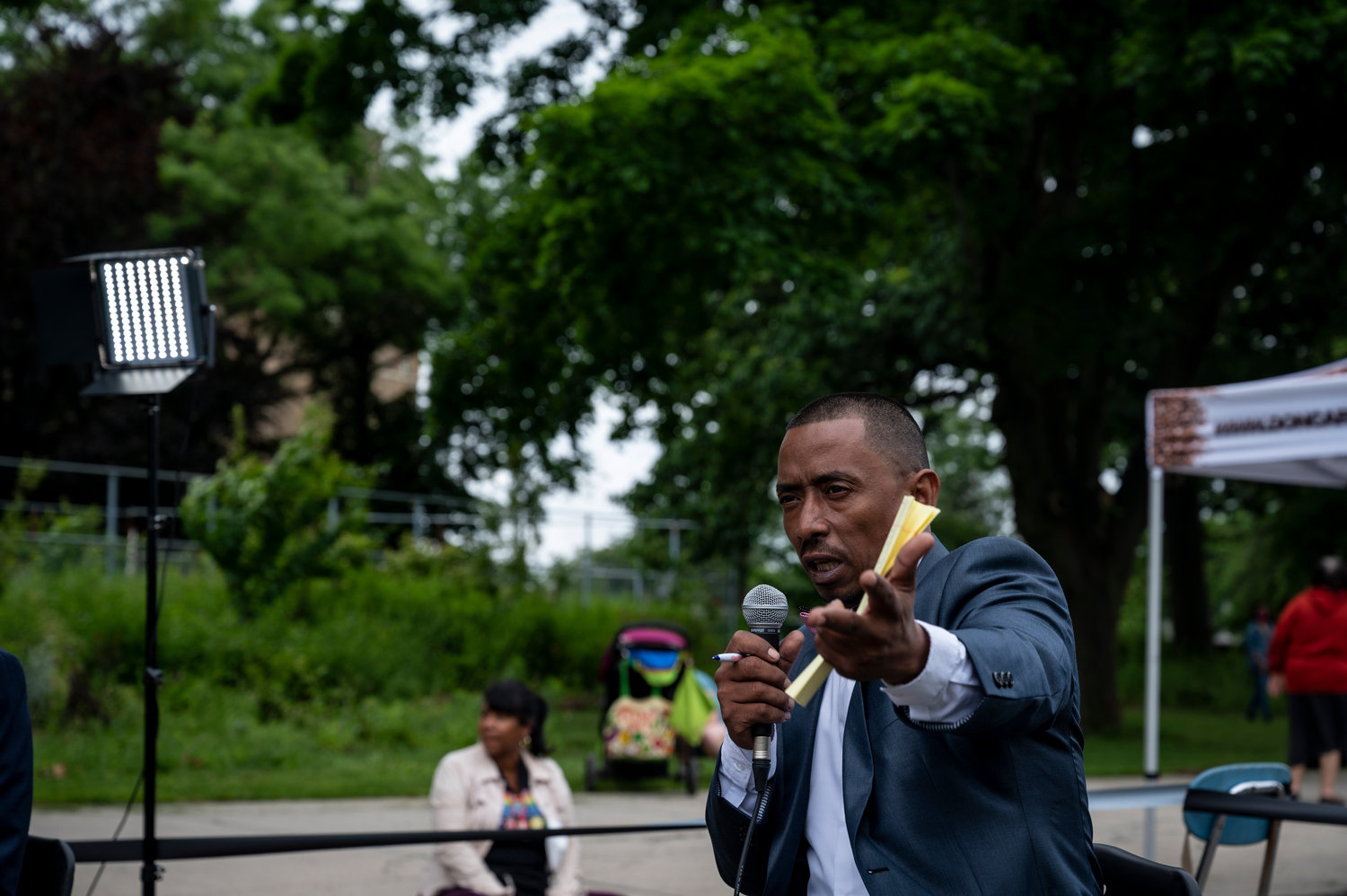 Marcos Sierra claims he couldn’t print any of his campaign materials in the Bronx because he was blocked by the Democratic Party political machine and its support of incumbent councilman Eric Dinowitz. Sierra hopes to make Dinowitz’s term brief in the June 22 Democratic primary.
HIRAM ALEJANDRO DURÃN 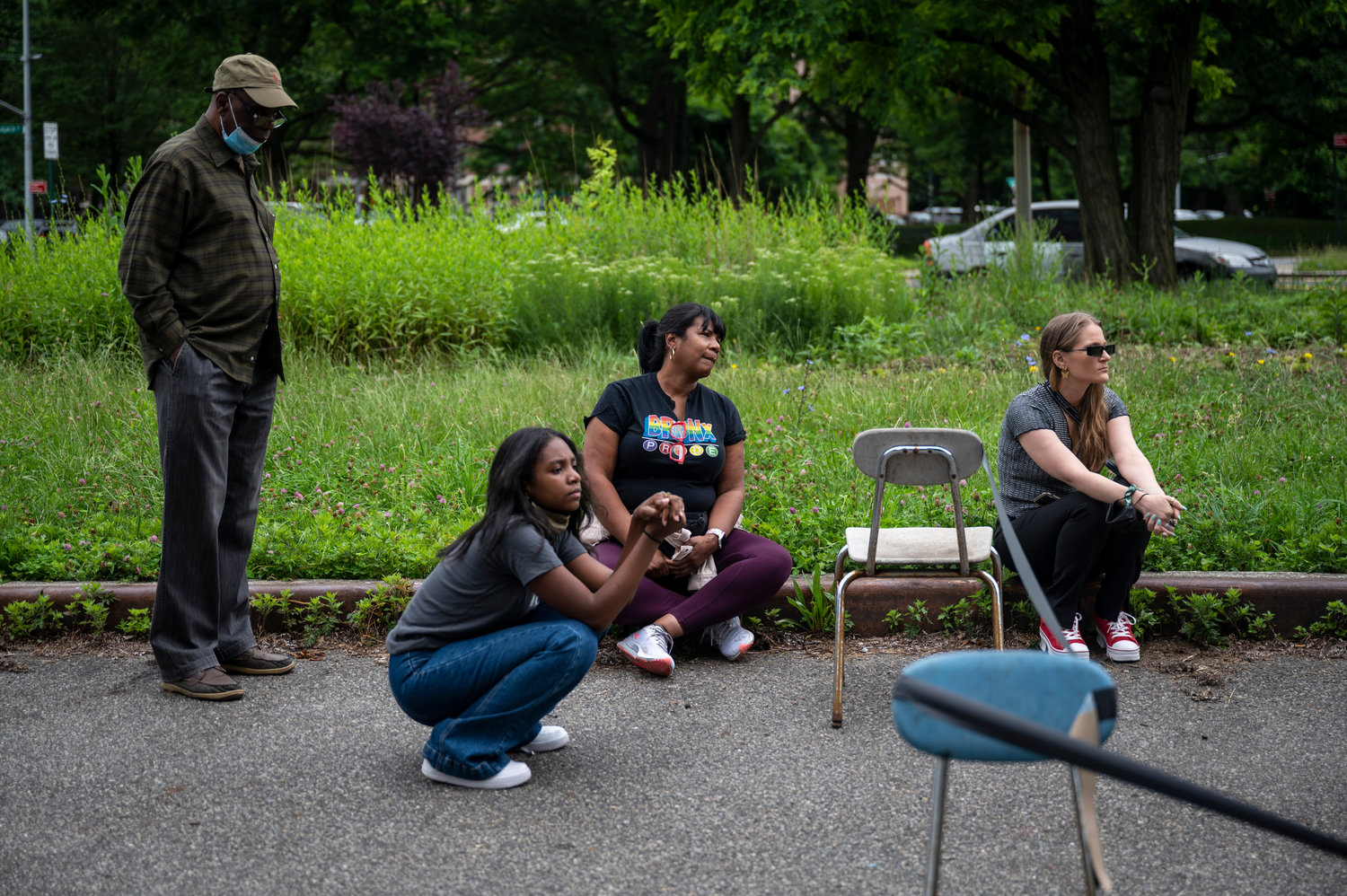 The Riverdale Press and BronxNet hosted a city council candidates forum next to DeWitt Clinton High School last Saturday in full view of district voters — at least those who attended a nearby Saturday farmers market. Six candidates are running in the June 22 Democratic primary, including incumbent Eric Dinowitz.
HIRAM ALEJANDRO DURÁN 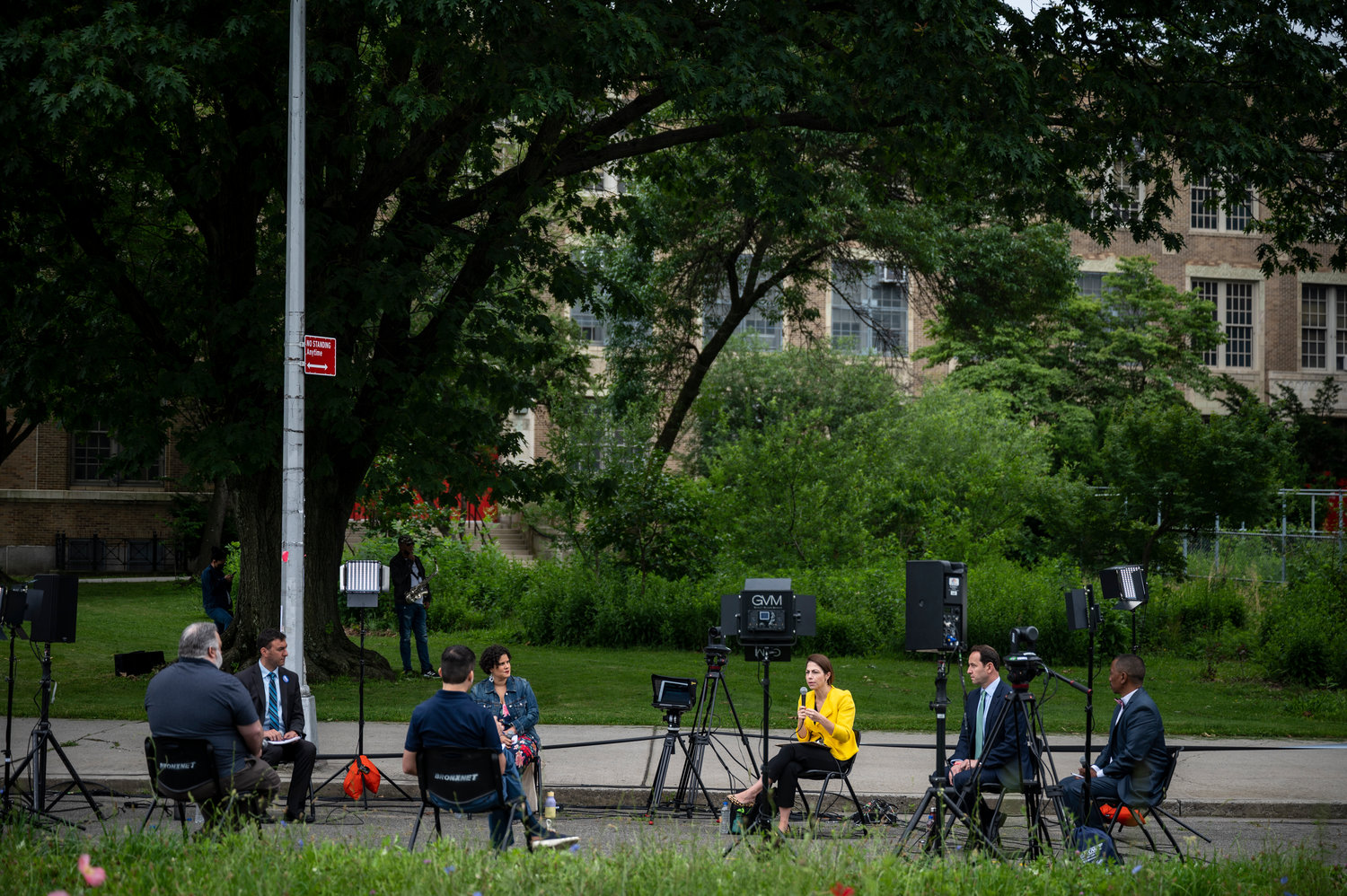 Eric Dinowitz, Mino Lora, Abigail Martin, Daniel Padernacht and Marcos Sierra debated how to tackle several issues in this corner of the Bronx at a recent candidates forum hosted by The Riverdale Press and BronxNet. This is expected to be the final time these six get to spar ahead of the June 22 Democratic primary.
HIRAM ALEJANDRO DURÁN 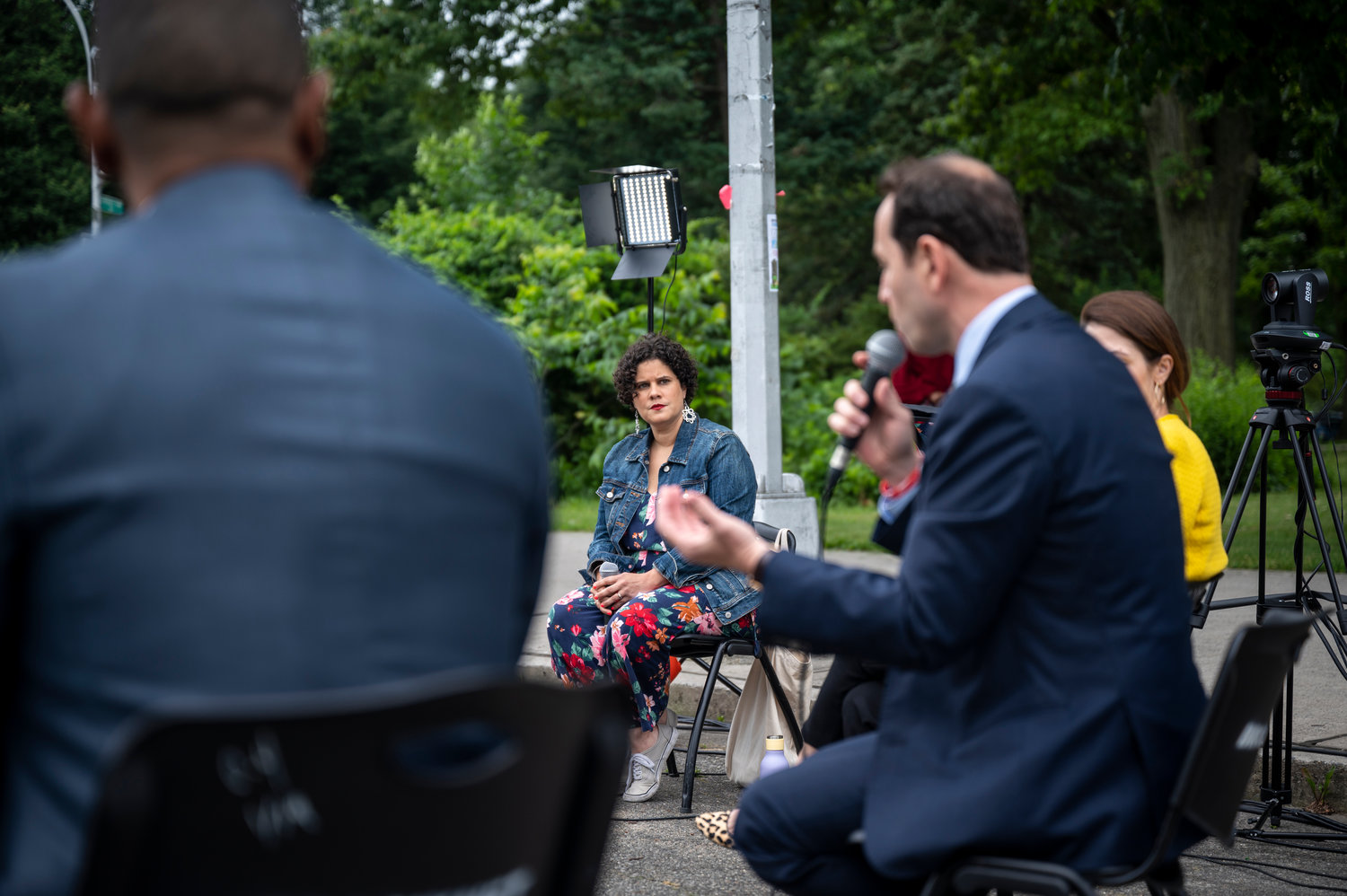 Eric Dinowitz, Mino Lora, Abigail Martin, Daniel Padernacht and Marcos Sierra debated how to tackle several issues in this corner of the Bronx at a recent candidates forum hosted by The Riverdale Press and BronxNet. This is expected to be the final time these six get to spar ahead of the June 22 Democratic primary.
HIRAM ALEJANDRO DURÃN 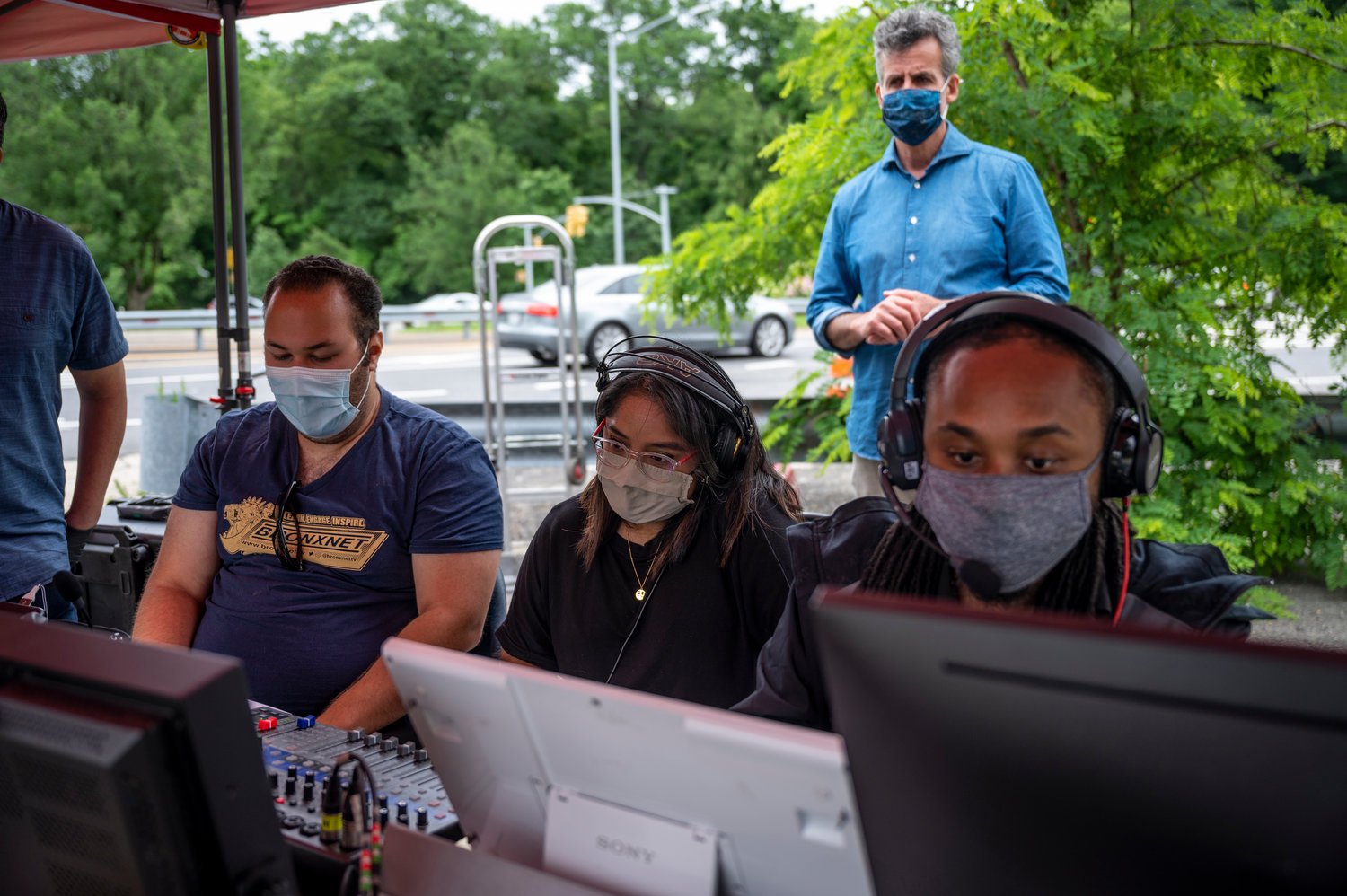 The candidates running against incumbent councilman Eric Dinowitz sparred in a recent forum co-hosted by BronxNet and The Riverdale Press just outside of DeWitt Clinton High School. This is expected to be the final time the candidates will get to debate the district’s issues ahead of the Democratic primary on June 22.
HIRAM ALEJANDRO DURÃN
Previous Next
Want to watch?

he political forum featuring five of the candidates seeking the city council seat once held by Andrew Cohen was sponsored by The Riverdale Press and BronxNet. It airs on Optimum Channel 67, and FiOS Channel 2133:

It’s finally here. After months — even years, for some — of campaigning, next week this corner of the Bronx will finally choose its representative in City Hall for the next two years.

As the sitting councilman, Eric Dinowitz must defend his seat against five challengers in the June 22 Democratic primary, although early voting is already well underway. Dinowitz won his seat in a March special election to replace Andrew Cohen, who stepped down to join the Bronx Supreme Court, and has served since mid-April.

Like the special election, the primary will be yet another ranked-choice contest, where voters put their top five choices in order of preference. The council candidates join a ballot filled with citywide races for mayor, comptroller and public advocate, as well as contests for borough president and two civil court judgeships.

And who would’ve thought the definition of “eviction” would be a point of contention for the candidates in the final stretch of this primary race.

But that’s exactly what happened after the principals of DeWitt Clinton High School decided to oust the James Baldwin Outdoor Learning Center from the school grounds. Named for a Clinton alum who became a celebrated American writer, the learning center started with a community garden on the western side of the school in 2010, and has grown to include a number of activities ranging from agricultural programs to a Saturday farmers market.

But now, volunteers are locked out of the garden after the city’s education department cited permitting issues, and could likely never be allowed to return.

Airing that topic made sense at what is expected to be the final candidates forum for Cohen’s old council seat, since the farmers market and garden played host to the event that was led by The Riverdale Press and BronxNet.

In what has become the only in-person forum in this particular race, all of the candidates joined the moderators — BronxNet reporter Javier Gomez and Press editor Michael Hinman — except for retired New York Police Department detective Carlton Berkley, who was out of state on a family matter.

“I think it’s extremely horrible what the (school) administration did here,” Padernacht said. “On very little notice, they told these folks that — after years of hard work, and years of teaching students here — they had to leave right away.”

The root issue is a lack of transparency from the education department, he said, and the fact that the decision to oust the garden was made without any community input.

In order to save the garden, Padernacht said the area’s current elected officials — like Dinowitz — must nag schools chancellor Meisha Porter every day about why the garden isn’t coming back.

But Dinowitz says his office already has intervened. In fact, the eviction was stopped dead in its tracks.

“They were going to be evicted,” the councilman said. “They were asked to remove everything by a certain date, and that has been revoked. And we are in the process of saving the garden.”

Using the power of his elected office, Dinowitz says he pulled together the school’s principals, some community members and the learning center’s leadership to discuss the issue. The problem is with the city needing to issue a new permit for the center — something the education department isn’t doing because the city agency told him they currently aren’t issuing these permits.

But social worker Abigail Martin spoke up challenging Dinowitz’s assertion the problem had been solved, because the learning center’s members are still locked out of the garden.

On the broader topic of housing evictions, Mino Lora — a non-profit executive director from Spuyten Duyvil — described housing as a “human right,” saying it’s time to cancel apartment rent for those who found themselves financially devastated through the coronavirus pandemic.

“It is unacceptable that this rent burden that we’ve been having, and the crisis that’s been exacerbated during COVID, is happening right now,” Lora said. “It points to our flaws as a society, and us prioritizing New Yorkers and Bronxites.”

The city council must also think about what exactly affordable housing is by redefining what is — and isn’t — affordable. That starts with abandoning the area median income formula used to determine affordability, and replacing it with a more neighborhood-specific calculation based on income at the ZIP code level.

However, Martin openly questioned Lora’s commitment to affordability. She cited claims Lora supported a controversial rezoning plan in Manhattan’s Inwood neighborhood that passed the city council in 2018. Opponents to the plan say it will gentrify the neighborhoods, pushing many out of their homes.

“You’re always the one fighting for workers, yet you supported this plan that’s going to displace thousands of immigrants, thousands of residents,” Martin said. “That’s going to hurt small businesses. It’s really important for us in this district to understand what happened there. And to let us know: Is that going to happen to us?”

“You literally stood shoulder-to-shoulder with Ydanis and applauded, this is a quote, ‘applauded the introduction of a theatre component in this rezoning, and that gentrification was inevitable,’” Sierra said. “It is inevitable. But for me, it’s tough to swallow that you stood fast on this development.”

But Lora described all those claims as a mischaracterization. As the head of her nonprofit, the People’s Theatre Project, Lora said she was tasked with leading the arts and culture component of the rezoning plan. She crafted it based on input from many of her non-profit’s neighbors in Inwood, but ultimately opposed the plan’s final version because it ignored everything she and the neighborhood put together.

Struggling to spend money in the Bronx

“Over three years we worked with the community, we presented a community-driven project, one that addressed the needs of our community,” Lora said. “And to be frank, the day that it was announced, the plan that was presented did not match” that.

Additionally, Lora said, her campaign has taken pains to reinvest in this corner of the Bronx throughout both the special and primary elections. Lora has spent 39 percent of her campaign funds locally since March, a dollar amount higher than anyone else in the race by far. She did it by hiring her campaign staff locally.

Martin says she, too, has hired locally. But when it came to some of her most expensive work like printing campaign materials, she was forced to go outside of the Bronx, claiming the Bronx Democratic Party political machine controls all printing operations in the borough.

“When I was exploring running for this campaign, one of the pieces of advice that I got from multiple insiders was, ‘Do not trust any printers in the Bronx,’” Martin said. “’The Bronx machine has fingers in all of them. You have to go outside.’ And everybody knows that a bulk of candidate expenditures are in printing. So, that’s what we did. We went outside the borough for printing.”

The end result was Martin spending just 7 percent of her campaign funds in the Bronx, although she says that’s not counting the $26,000 she’s paid to her campaign manager, Alexandrea Logan. Martin says Logan is temporarily living in Riverdale, despite reporting a permanent address in Illinois to the campaign finance board. And if those dollars were counted, her Bronx spending would jump to 23 percent.

However, Dinowitz was the worst offender in local expenditures, spending just 2 percent of his nearly $90,000 in campaign funds in the Bronx since March. Maybe the system should be changed to incentivize local spending, the councilman said, but he’s proud most of his was directed toward individuals.

“There’s always ways to go back to programs and improve them,” Dinowitz said. “But my campaign spends its money on direct voter contact to talk with as many people in the district as possible. That is almost every single dollar I spend is spent on getting my message out and talking to people.”