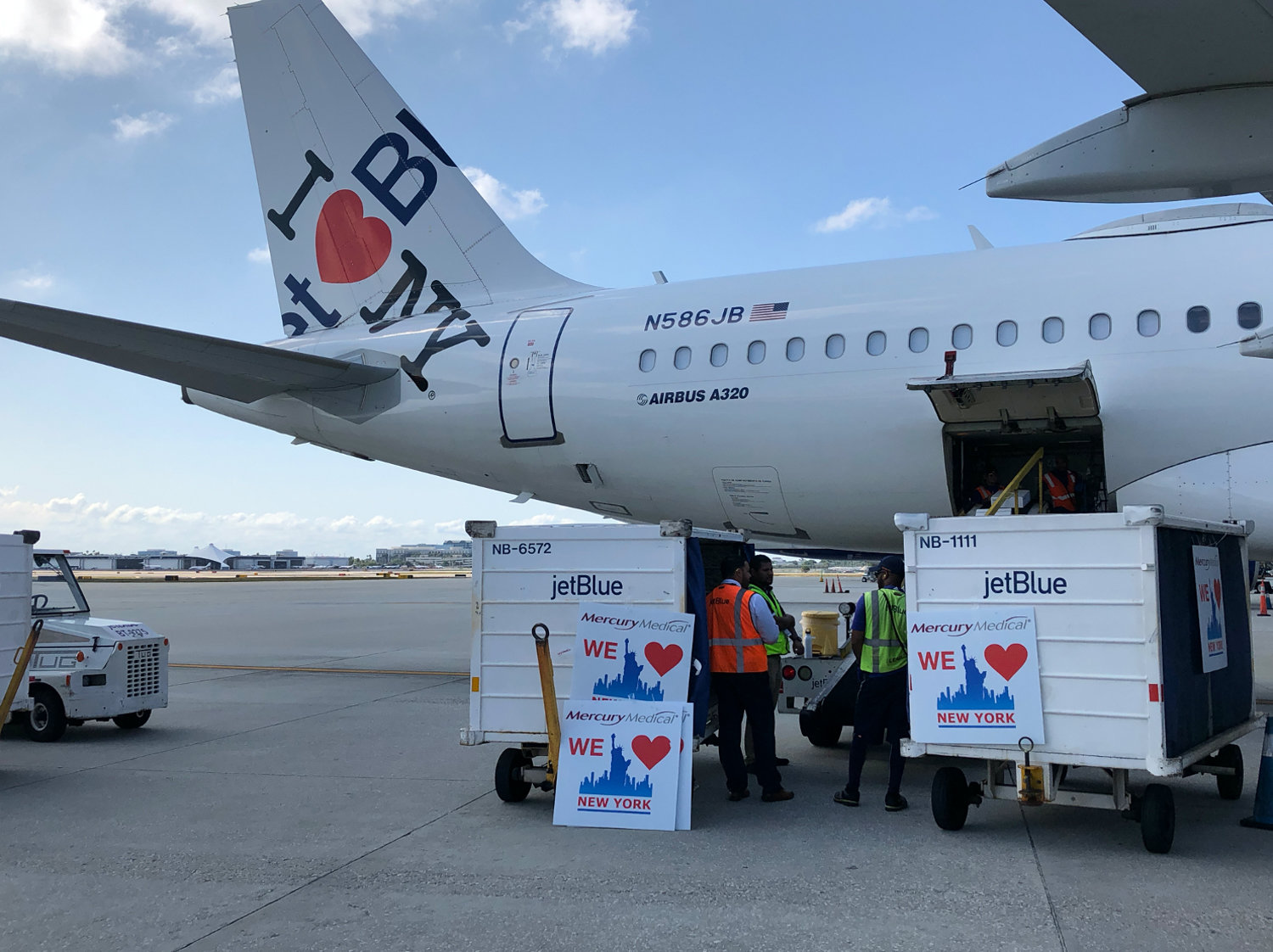 Based in Clearwater, Florida, Mercury Medial produced and shipped its Flow-Safe II CPAP mask to New York, intended to help COVID-19 patients who otherwise would have needed ventilators.
Courtesy of Mercury Medical 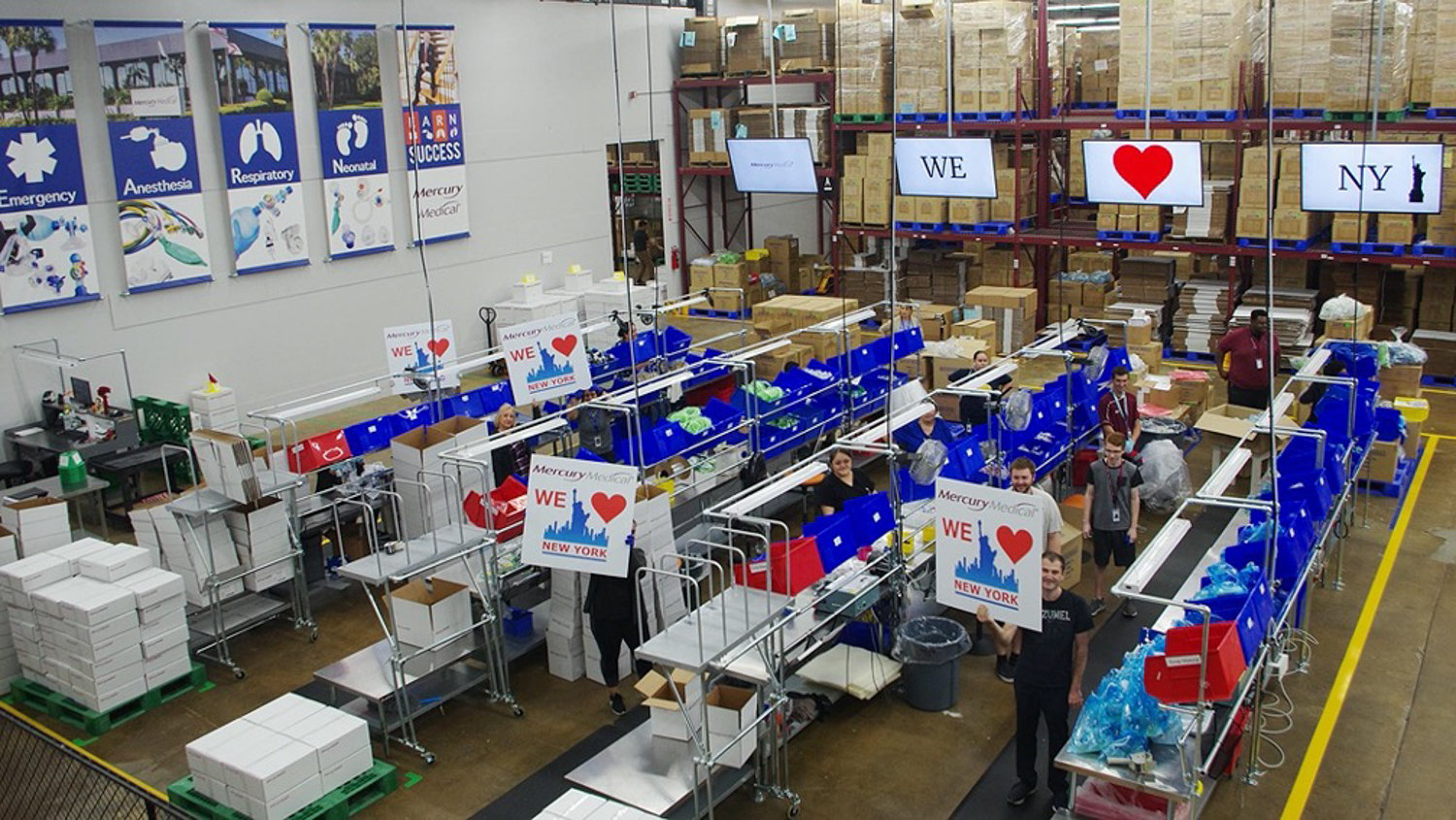 Thanks to the intervention of U.S. Rep. Eliot Engel, Mercury Medical was able to produce and ship its Flow-Safe II CPAP masks to New York in an effort to help offset equipment shortages during the coronavirus pandemic.
Courtesy of Mercury Medical 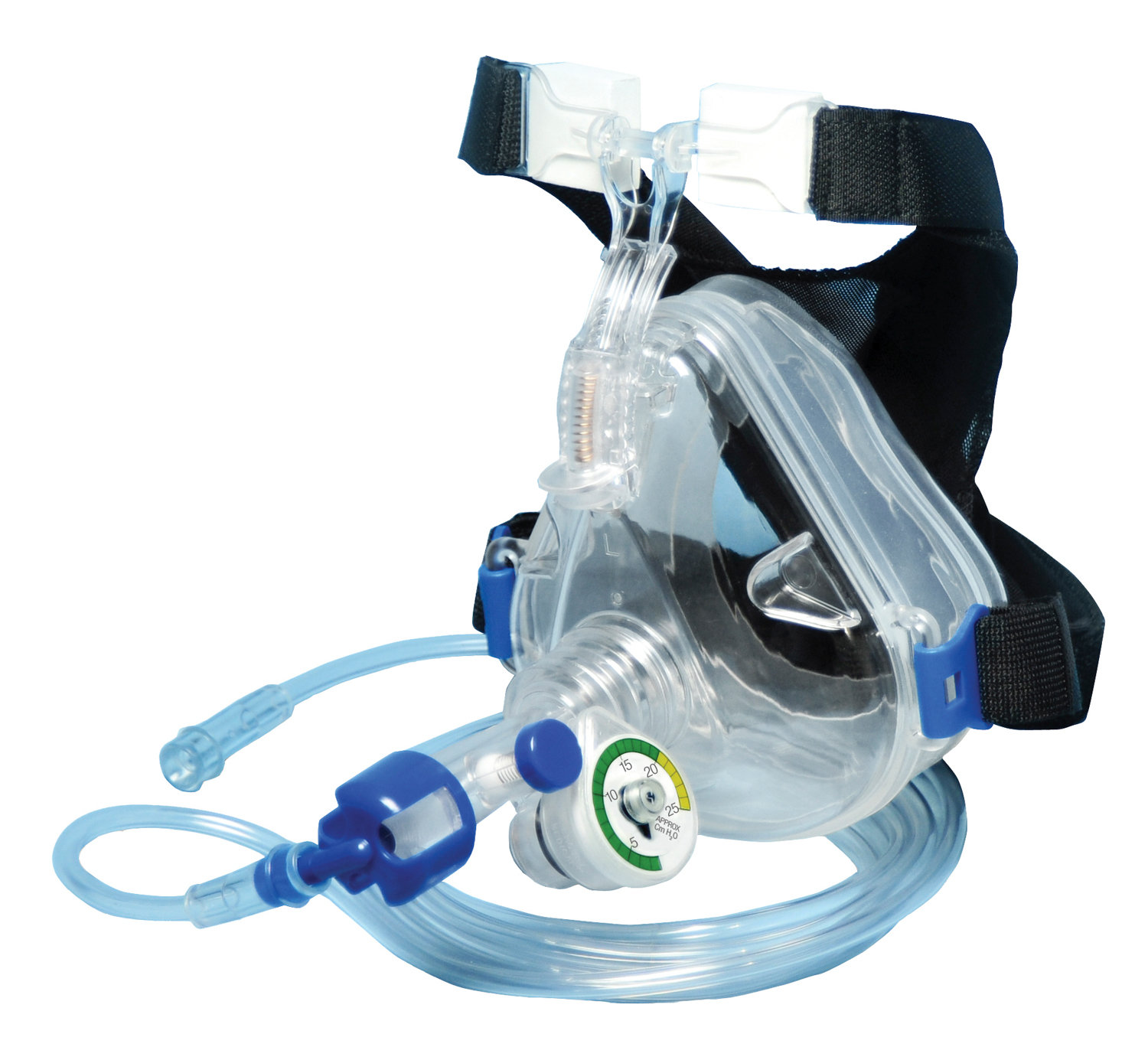 Mercury Medical ramped up production of its Flow-Safe II CPAP mask thanks to the efforts of U.S. Rep. Eliot Engel to reactivate a Malaysian plant shut down because of the coronavirus pandemic. The Florida-based company offered its masks as alternatives to ventilators, for those suffering later stages of COVID-19.
Courtesy of Mercury Medical 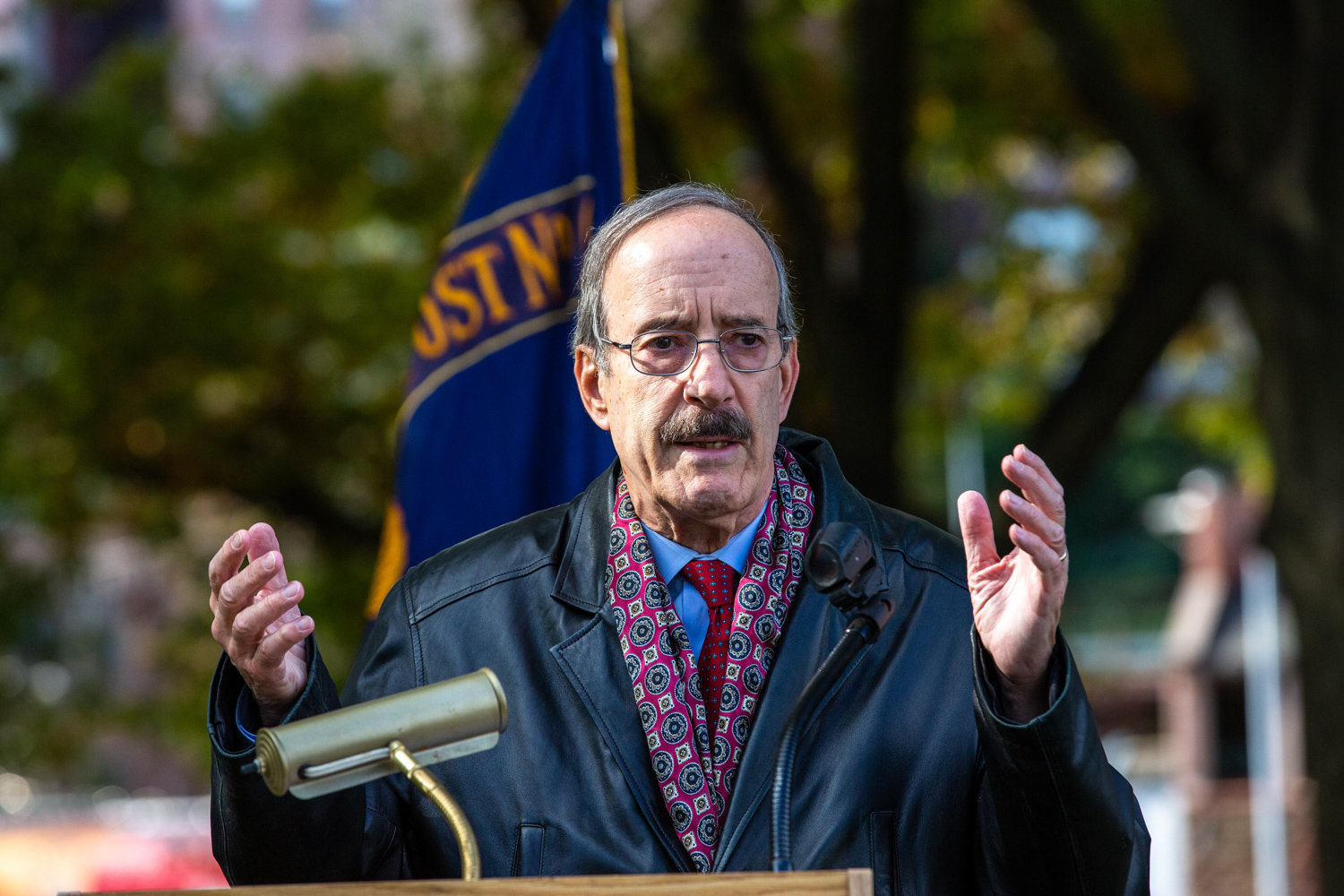 U.S. Rep. Eliot Engel leveraged his international connections as chair of the House Foreign Affairs Committee to jumpstart production at a Malaysian factory to produce a key component for a CPAP mask a Florida medical manufacturer says can help people suffering from COVID-19.
EIAN KANTOR / File
Previous Next
By MICHAEL HINMAN

The situation wasn’t looking too positive for Gov. Andrew Cuomo as April began and a nightmare scenario — a pandemic seemingly out of control — unfolded before his eyes.

Some of the world’s best epidemiologists predicted tens of thousands of people would require hospital intensive care and connection to life-saving ventilators, but there simply wasn’t enough of the devices to go around.

Among the dozens of companies stepping up to help was a small medical device manufacturer in central Florida. Except it wasn’t offering New York a truckload of ventilators. Instead, Mercury Medical offered a disposable mask it had branded Flow-Safe II, designed as an alternative for patients who depended on air pressure devices to treat conditions like sleep apnea.

Such devices are formally known as continuous positive airway pressure machines — commonly referred to as CPAP machines — and Mercury Medical believed it could make a difference for patients struggling with COVID-19 complications while they wait for a ventilator.

“When you think of CPAP, you typically are talking about a machine that creates pressure to keep your airways open,” said Dr. John Gargaro, chief executive and president of Mercury Medical. “Traditionally, you needed to have a machine to make that work. But seven or eight years ago, we created Flow-Safe, a machine-less CPAP.”

Instead, this specialized mask is connected directly to an oxygen tank, using the flow of that precious gas to create enough pressure to keep airways open. For someone in severe respiratory distress like someone suffering from pneumonia or some other COVID-related symptom, it could be the difference between life and death.

Cuomo liked what he heard coming from Clearwater, Florida, and placed an order for as many masks as he could get his hands on. But there was one problem: A factory in Malaysia that manufactured key components of the mask had shut down because of the coronavirus pandemic, and Mercury Medical couldn’t complete New York’s order without it.

So Gargaro turned to his congressman, U.S. Rep. Charlie Crist, who in turn immediately reached out to the Malaysian government, pushing officials there to deem the factory’s work “essential.” After some prodding, Malaysian officials gave in, allowing the factory to resume operations — but only at half-capacity.

“Here we are in the middle of this spike in demand for our respiratory care products to the likes we have never seen, and our contracted manufacturer was not only down for two weeks, but now can only operate at 50 percent capacity,” Gargaro said.

That just wasn’t going to work. Unfortunately, Crist had exhausted his contacts in Malaysia. But the former Florida governor had one more weapon up his sleeve: New York congressional colleague Eliot Engel.

“We immediately engaged the Malaysian government through its embassy in Washington, and asked them to step in with this factory,” Engel’s aides told The Riverdale Press. “Factory workers are working in close conditions, and what they are doing isn’t essential to Malaysia, they told us. That factory might not be essential for Malaysia, but it certainly was essential for us.”

That argument seemingly won over Kuala Lumpur, and within days, the Malaysian factory was running at 100 percent.

“We really appreciate Mr. Engel’s work on this,” Gargaro said. “Whatever it is he did, all of a sudden, the tide turned, and we were back in business.”

With a little help from JetBlue, hundreds of completed masks departed Tampa and were flown to New York. While social distancing and other measures appeared to have curbed the spread of the coronavirus in New York by that point, Cuomo still publicly thanked both Mercury Medical and JetBlue for stepping up last month and getting the masks to the COVID-19 hotspot.

“Elected officials have a responsibility right now to do all they can to ease the burden of this deadly pandemic,” Engel told The Press, in a statement. “As chairman of the Foreign Affairs Committee, I’m committed to using my relationships with American diplomats and governments around the world to clear roadblocks, whether to help Americans return home, or to import critical medical equipment.”

As a former surgeon, Gargaro says it’s hard to see people suffer anywhere without looking for a way to treat it. Seeing what was happening to New York in the early days of the pandemic was enough to keep him awake at night.

“You don’t often get opportunities to help people like this,” Gargaro said. “But then, there is something we make, and here is a city that is drowning, and we actually have a product that can help them. This was something we were able to make work, with a little help from Washington, and hopefully it helped.”