VOLS provides legal services for those who otherwise would lack them 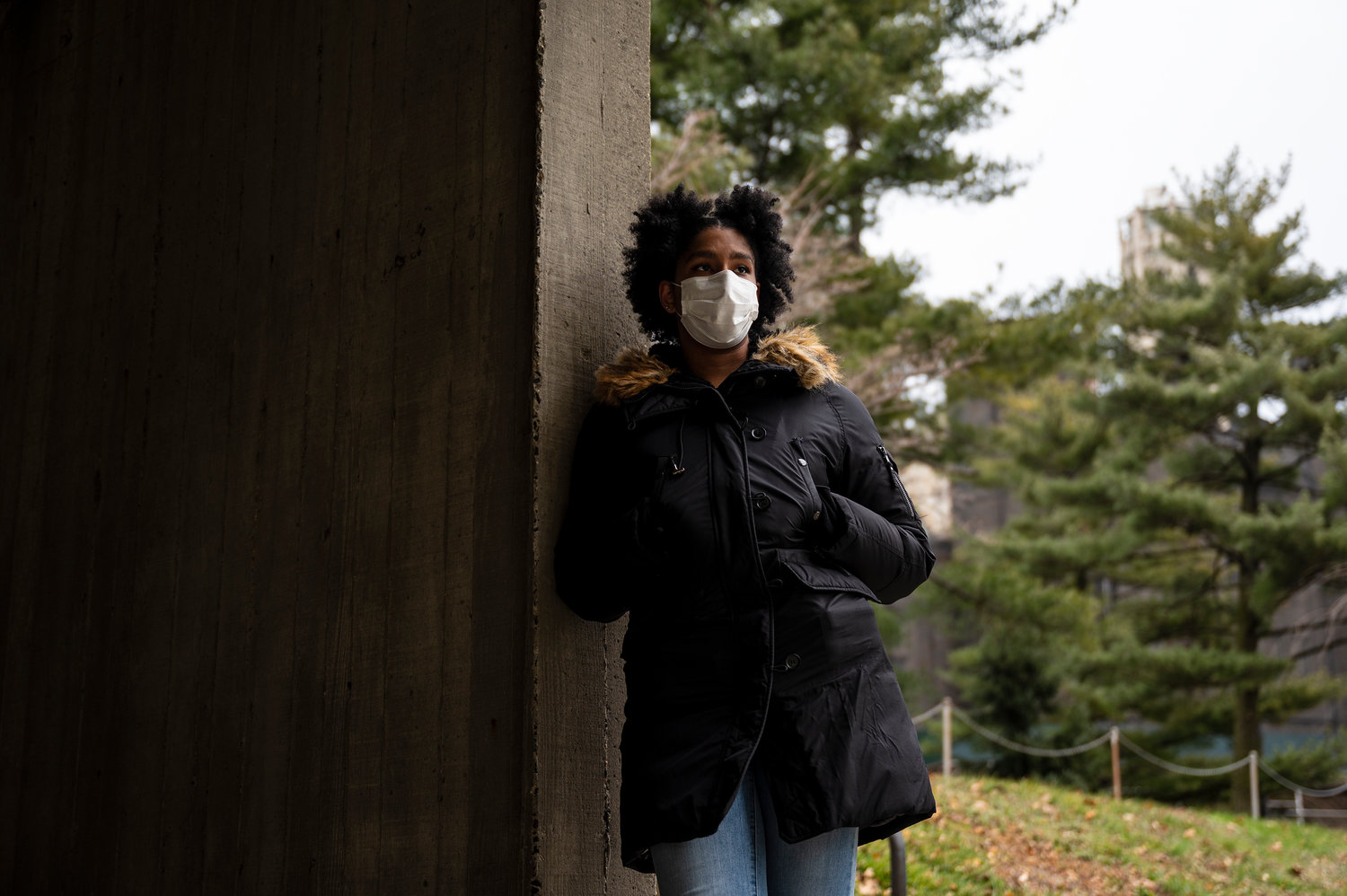 Mabel Lanzo may have watched a lot of ‘Law & Order’ in her life, but she enrolled at Lehman College to make graphics, not focus on legal issues. Yet, her internship with the Bronx Recovery Corps allows her to marry both as she designs work for the Manhattan-based pro bono law group, Volunteers of Legal Services.
HIRAM ALEJANDRO DURÁN 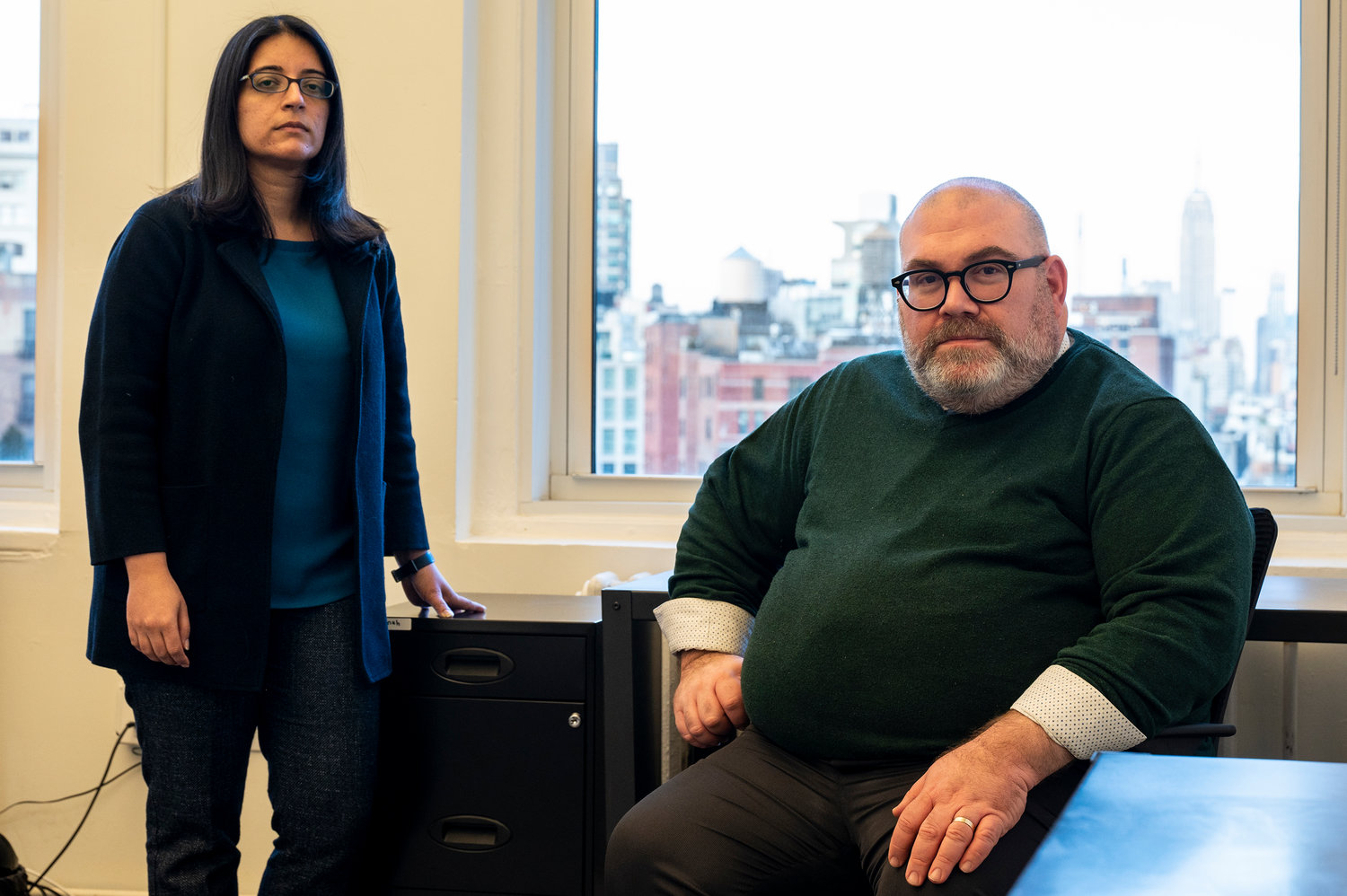 Peter Kempner, right, lived in Spuyten Duyvil until his mom passed away. Then he got a hard lesson in how the legal world works — lessons he brings with him as the legal director for Volunteers of Legal Services in Manhattan. He works with Abja Midha — VOLS’ executive director — and the rest of the team to provide lawyers for families and businesses that might not have access to one otherwise.
HIRAM ALEJANDRO DURÁN
Previous Next
By SARAH BELLE LIN

When it comes to family, there aren’t many Ana can turn to. In fact, the 92-year-old only has her daughter, Sandra Ortega, nearby. If she can count Queens as close.

Still, Ana has been busy preparing some important documents around a sensitive subject: how her life will end. And as Ortega quickly found out, it’s a mountain of paperwork.

Neither of them is a lawyer. In fact, Ortega makes her living as a hairdresser. Navigating such a complicated legal landscape is not anything she ever prepared for before. And that’s not even touching finances.

But luckily, the person who delivers food to Ana from Meals on Wheels suggested another route: Volunteers of Legal Services.

“They sent her a yellow manila envelope with everything she would need concerning her life,” Ortega said. “We just did the power of attorney.”

“I didn’t really realize how involved it could be,” Ortega said. “I didn’t think about all these little details, and how everything has to be on paper. Documented.”

Now, Ortega is empowered to take care of all her mother’s personal accounts, and both of them can turn their attention to far more important things: Enjoying their time as mother and daughter.

That’s exactly what Peter Kempner likes to see. He’s the legal director at VOLS, and is a Spuyten Duyvil native who spent his first 11 years growing up at The Whitehall. He attended P.S. 24 Spuyten Duyvil before relocating to Manhattan after his mother died.

Yet it was her death that pulled back the curtain when it came to the American health care system.

“I saw her struggle with getting access to benefits when she became disabled and unable to work because of the cancer that eventually claimed her life,” Kempner said. “I remember overhearing her on the phone talking with agencies and her friends about the challenges that she was facing.”

VOLS has served some 6,500 clients over the past year. A quarter of them are seniors, including a number of veterans.

“We get calls — often from adult children — who need to get a power of attorney over somebody,” Kempner said. “Sadly, they say, ‘Mom can’t talk. Mom has dementia. Mom has Alzheimer’s. In those situations, we shift gears to try to advise the families about what they could do to intervene.”

Shifting gears could almost be something of a professional skillset for Kempner at this point.

“I actually had gone to law school because I had interest in policy and politics,” Kempner said. “I had never intended to be a practicing attorney.”

But even free legal services has its limits, Kempner acknowledged. VOLS offers a limited resource. While no one has an absolute right to a lawyer unless charged with a crime.

Still, those facing eviction or being denied benefits can still find some legal intervention through pro bono attorney work.

“That actually goes back to our mission,” Kempner said. “To tap into the resources of the private bar, because pro bono in the spirit of volunteerism is a part of the legal profession.”

Beyond volunteerism, VOLS also is in the business of “first times.” Like introducing young people to the legal world. Mabel Lanzo is one of those people, sent out to Bronx small businesses and nonprofits as a way to help revitalize the borough’s economic recovery from the COVID-19 pandemic.

The Lehman College graphic design major grew up watching “Law & Order,” but eventually grew out of the show because “each episode was basically the same.” And it was “heartbreaking.”

“I live in the Bronx, and I know this happens in real life,” Lanzo said. “And it’s a reminder of the sadness in life.”

Lanzo is part of the Bronx Recovery Corps, which offers select Lehman students 10-week internships. When asked to narrow down her interests, Lanzo emphasized her creative tendencies, which were a perfect match with VOLS, who at the time desperately needed a graphic designer.

“I really do like a good puzzle,” Lanzo said. “Even though I don’t really know much about being a lawyer, I do enjoy reaching out to someone and letting them know they’re not in a void by themselves.”

When Lanzo saw the organization’s Spanish-translated web pages, she was drawn to their commitment to make legal services more accessible to people of color.

“Coming from someone who is part of the Hispanic community, it was a breath of fresh air,” said Lanzo, who is Dominican and Puerto Rican. “If my people or my family needed help, they can just figure it all out in (VOLS’) newsletters, emails or website.”

And so that’s exactly what Lanzo set to work doing, spending 10 hours each week designing and updating the organization’s graphics.

“They take on pro bono cases ranging from children to senior citizens to veterans,” Lanzo said. “So basically, the graphics I make for them has to grab their attention. It’s a form of inclusion to make (sure) everyone has a place, and they can figure out this chaotic world.”

The most challenging project revolved around Veterans Day. Lanzo was tasked to capture the mission of VOLS’ veterans initiative, which mostly serves those who are elderly. She couldn’t draw from “Law & Order” on this one, but instead some of the military movies she saw involving Vietnam.

“I’ve seen a few documentaries about how it affects the veterans who were there,” Lanzo said. “Veterans are underappreciated. They serve their time, they do what they have to do. But immediately after they come home, they’re forgotten.”

Lanzo has experience working with vulnerable groups of people thanks to what she’s done with a special needs school her mother teaches at. It’s a place she says “you take the most difficult child in the classroom, and they’re your priority.”

Oftentimes, those children could become aggressive and violent, or simply lack the ability to vocalize or even understand their own feelings.

It makes safe spaces all the more important, Lanzo said. It allows people to better express — and, in turn, help — themselves.

The same goes for putting together digital images.

“Even if it’s just a graphic on a website, it shows someone that they’re a part of a group and that group is seen,” Lanzo said. “In my belief, every little thing that you do has an impact, even if you can’t immediately see it.”