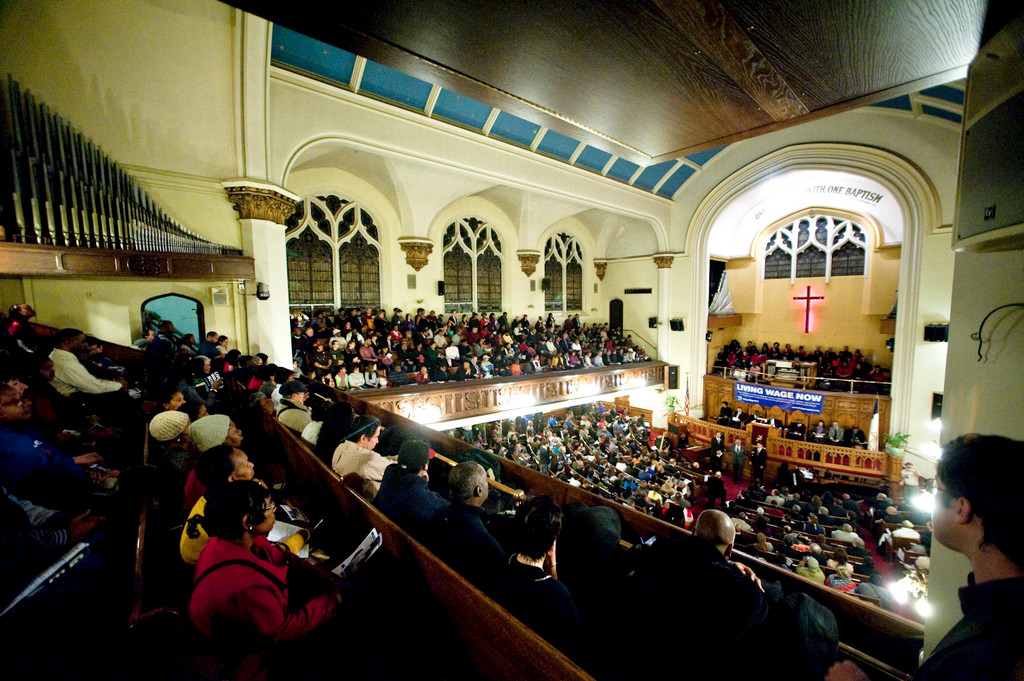 Councilman G. Oliver Koppell and Bronx Borough President Ruben Diaz Jr. were among those who gathered at the Convent Avenue Baptist Church in Harlem on Jan. 13 to rally for a living wage.
Karsten Moran / The Riverdale Press
By Adam Wisnieski

At a “Mass Meeting for Living Wages” at the Convent Avenue Baptist Church on 145th Street in Manhattan on Jan. 13, Mr. Koppell and Mr. Diaz were among the elected officials who joined religious leaders of all faiths to show their support for the Fair Wages for New Yorkers Act (introduced by Mr. Koppell and Councilwoman Annabel Palma), which has been amended and was resubmitted to the City Council last week.

The church was filled beyond capacity with latecomers forced to stand in the back or hold the door open so those standing in the lobby could hear the speakers inside.

After watching videos of Dr. Martin Luther King Jr. and listening to a rousing introduction by the church’s Rev. Jesse T. Williams Jr., Mr. Diaz started off a string of speeches.

Mr. Diaz asked all those from the Bronx to stand up and cheer and they did. A large contingent from the Northwest Bronx Community and Clergy Coalition, which supported the borough president in the Armory debate, also made some noise.

“It was there where we said, ‘you know what, you can take your project and others like it and shove it!’” Mr. Diaz said, garnering a thunderous applause.

In late 2009, Mr. Diaz was the driving force behind the battle over a development proposal for the Kingsbridge Armory. Mayor Michael Bloomberg supported a mall that would be developed by the Related Companies, but Mr. Diaz argued that development projects receiving taxpayer subsidies should be mandated to offer “living wage jobs” — defined as paying at least $10 an hour with benefits or $11.50 without.

The plan fell through when the City Council voted against the plan and shot down the mayor’s veto.