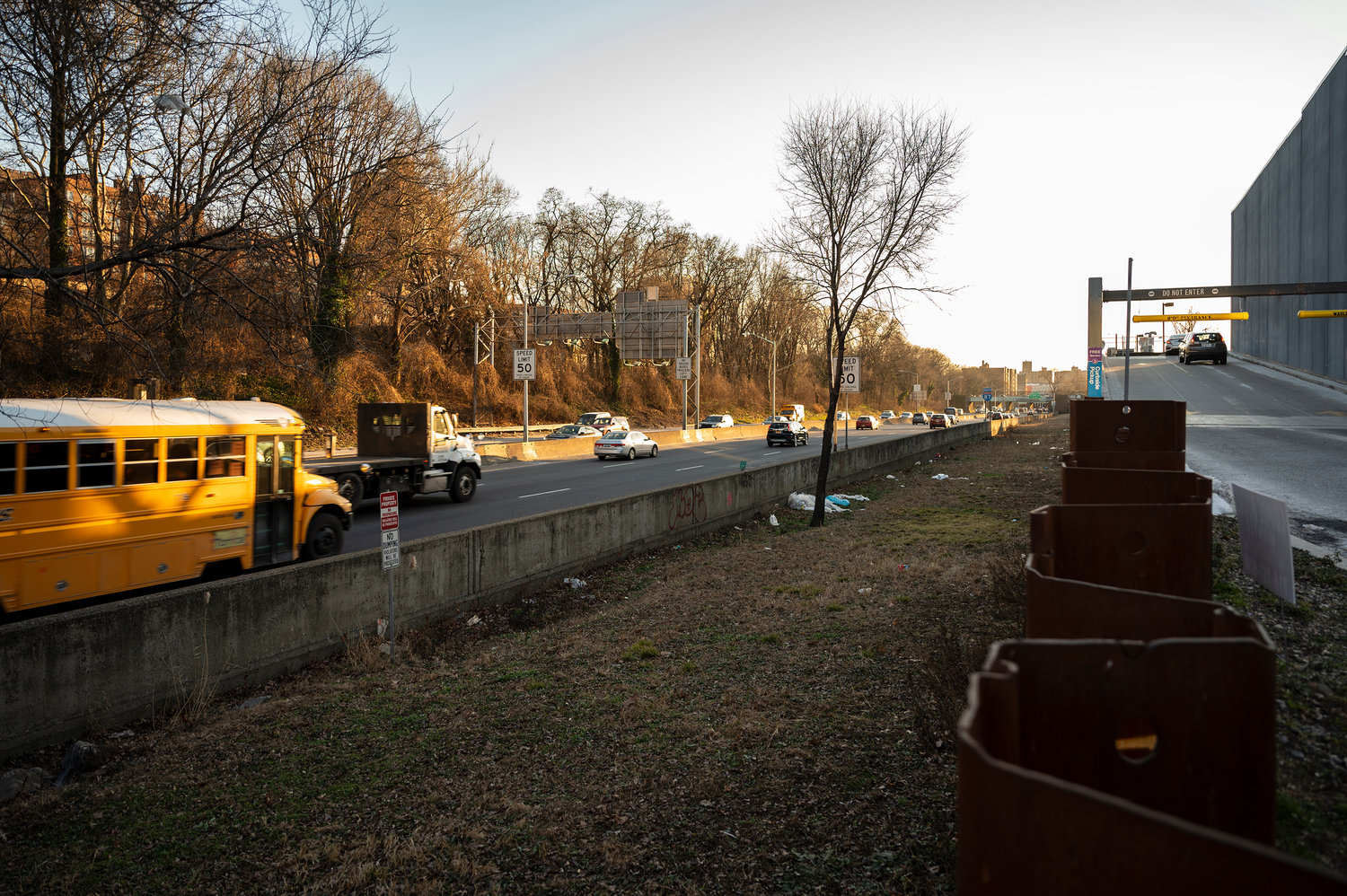 Part of the nearly one-mile stretch of unkempt land along the Major Deegan Expressway between Van Cortlandt Park South and West 230th Street, was a railroad line that hauled freight in and out of the city until the early 1980s. For more than a decade, Community Board 8 and other city leaders have wanted to transform that land into a park — maybe even into a brook — but CSX Transportation has remained in the way, refusing to sell the land inexpensively.
HIRAM ALEJANDRO DURÃN 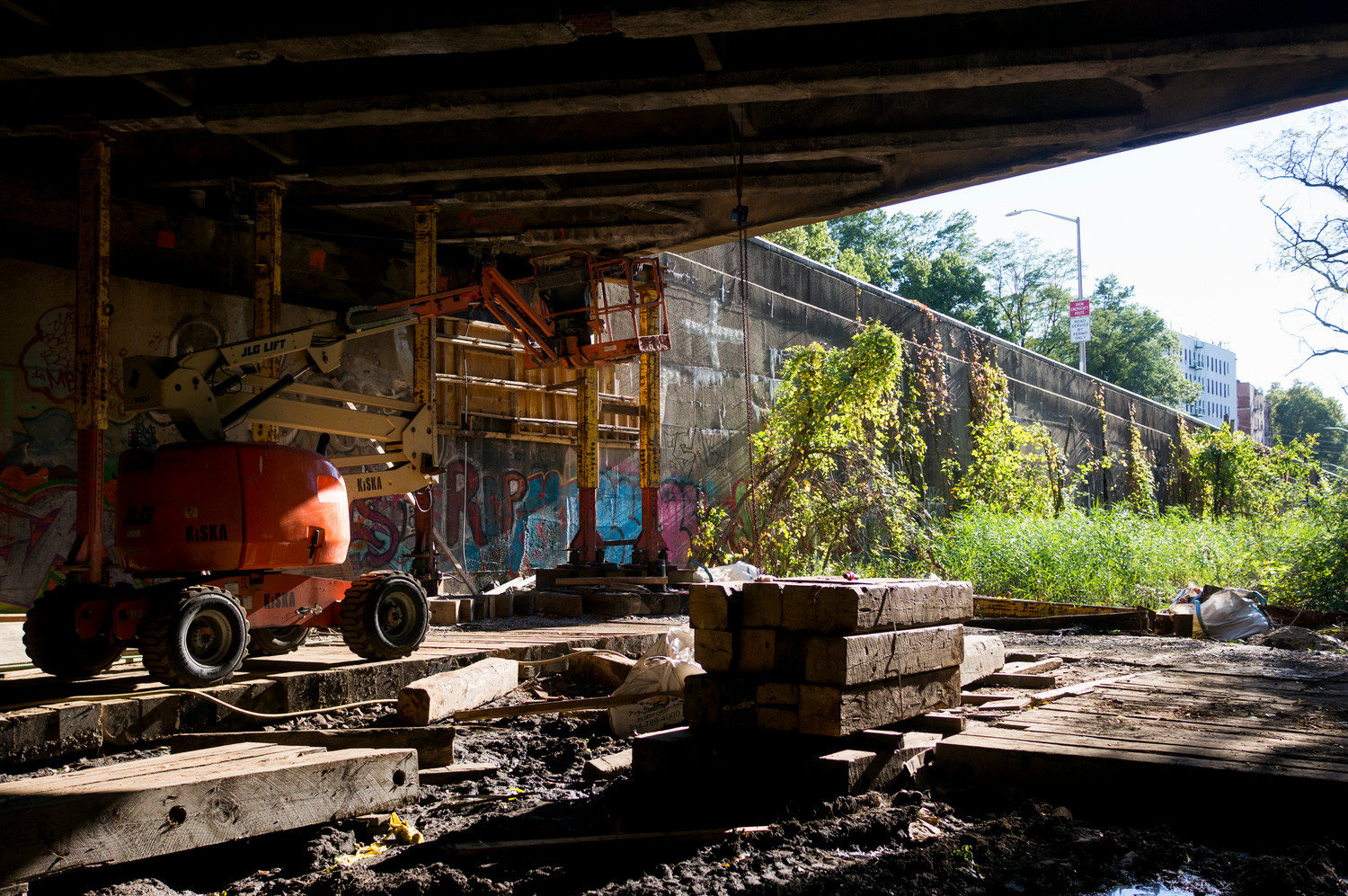 After years of waiting, CSX Transportation removed decades of trash and debris from what was once its Putnam Line tracks along the Major Deegan Expressway. City officials now hope to turn this stretch of land into not only a linear park through the Kingsbridge business district, but also a return of the now-underground Tibbett Brook.
JULIUS CONSTANTINE MOTAL/ File
Previous Next

This is not just the first daylighting story in New York City. It is, I think, the most important one.”
STEPHANIE EHRLICH
By MICHAEL HINMAN

After more than a decade of negotiation spanning three mayors and direct involvement from a future U.S. Senate Majority Leader, the stretch of vacant land running along the Major Deegan Expressway south of Van Cortlandt Park may finally be on the verge of selling.

And with it will come not only New York City’s newest stretch of parkland — but maybe even the return of Tibbetts Brook itself.

It all comes down to final negotiations between city officials and CSX Transportation — and possibly whether or not the railroad company is still demanding $10 million for its mile-long stretch. However, in a presentation made to Community Board 8’s environment and sanitation and parks and recreation committees, city officials say a deal could close soon.

And when it does, the city’s environmental protection department will join forces with the parks department to transform that land into something more than what commuters speed past every day.

“We hope to have that agreement signed very soon,” said Tolga Yilmaz, a senior project manager with the city DEP. “We have all been coordinating closely, reviewing a purchase and sale agreements.”

Negotiations to acquire the land have dragged on for years, with the railroad earning the ire of U.S. Sen. Chuck Schumer as recently as 2018 for backing out of a deal of allowing an independent appraiser set a price both sides could agree on.

“We’re telling CSX, ‘Stop blocking the tracks and take yes for an answer,’” Schumer said at the time. “We cannot allow this project to be delayed just ‘cause CSX wants to squeeze a few more pennies out of the community.”

At the time, the parks department had just $2 million to spend. But at least as 2021 came to a close, that financial landscape changed significantly. Now parks is prepared to spend $36 million, with an additional $97 million from DEP that would bring Tibbetts Brook back up to the surface for the first time in a century.

That was exactly what the advocacy group Bronx Council for Environmental Quality had pushed for over the years, and something one of its leaders tells The Riverdale Press was more than welcome news to receive from the city.

“Yes, it does sound like finally, the mayor got it,” Karen Argenti, the chair of the organizations water working group, said of Bill de Blasio. “We could talk forever about this, but I worry about climate change and how nobody’s really doing the right thing in the city and how to get back. We’ll take it one step at a time.”

The most expensive piece appears to involve “daylighting” the brook itself, bringing to the surface a waterway that once flowed not only down what is now the Major Deegan, but also through what is now Tibbett Avenue in Kingsbridge. Tibbetts Brook was buried more than a century ago, its fresh water mixed with other waste through sewage pipes that ultimately dump into the Harlem River.

Part of the nearly one-mile stretch of unkempt land along the Major Deegan Expressway between Van Cortlandt Park South and West 230th Street, was a …

In other words, the sewers will have room to carry more water — especially important during periods of heavy rainfall, where overtaxed sewer pipes create flooding. It’s hard to forget how Mother Nature temporarily reverted the Major Deegan back into a waterway last September after the remnants of Hurricane Ida slammed the area. The busy interstate was shut down for nearly two days because of heavy flooding between West 238th and West 225th streets.

Tibbetts Brook would flow from Van Cortlandt Lake down to West 225th, returning underground beneath the Metro-North tracks. That stretch of land would include not only a flowing brook, but also trees, a trail, and even access from multiple points along Broadway.

That aspect, at least, dates back to the original plan that made its way through the city’s bureaucratic red tape in 2011, according to CB8 chair Laura Spalter.

“They said there would be openings at West 238th, West 234th and West 230th streets,” she told The Press. “That’s what we’re still working out. But it would be a very nice recreational and economic benefit tie-in for the Kingsbridge community. And the environmental benefits are huge, because you would have that green infrastructure, and you’d also have that alleviation of all the flooding on Broadway.”

In fact, this is a project that has been far too long in the making. Especially for Spalter, who had been pushing for the city to do something with the old Putnam Line since at least the turn of the 21st century.

What had originally been just a parks project is now a much larger endeavor, especially with more detailed plans to bring Tibbetts Brook back to life in this part of the Bronx. It’s something Stephanie Ehrlich — the executive director and park administrator for the Van Cortlandt Park Alliance — has been especially waiting for.

And she’s excited, too, since the city says — depending on when CSX close on the Putnam Line sale — work on the overall project could begin as early as next year.

“We’re embracing an opportunity to properly tell the story of the park in it historic core and in its property context,” she said. “So this is not just the first daylighting story in New York City. It is, I think, the most important one. We’re doing something really, really big here.”