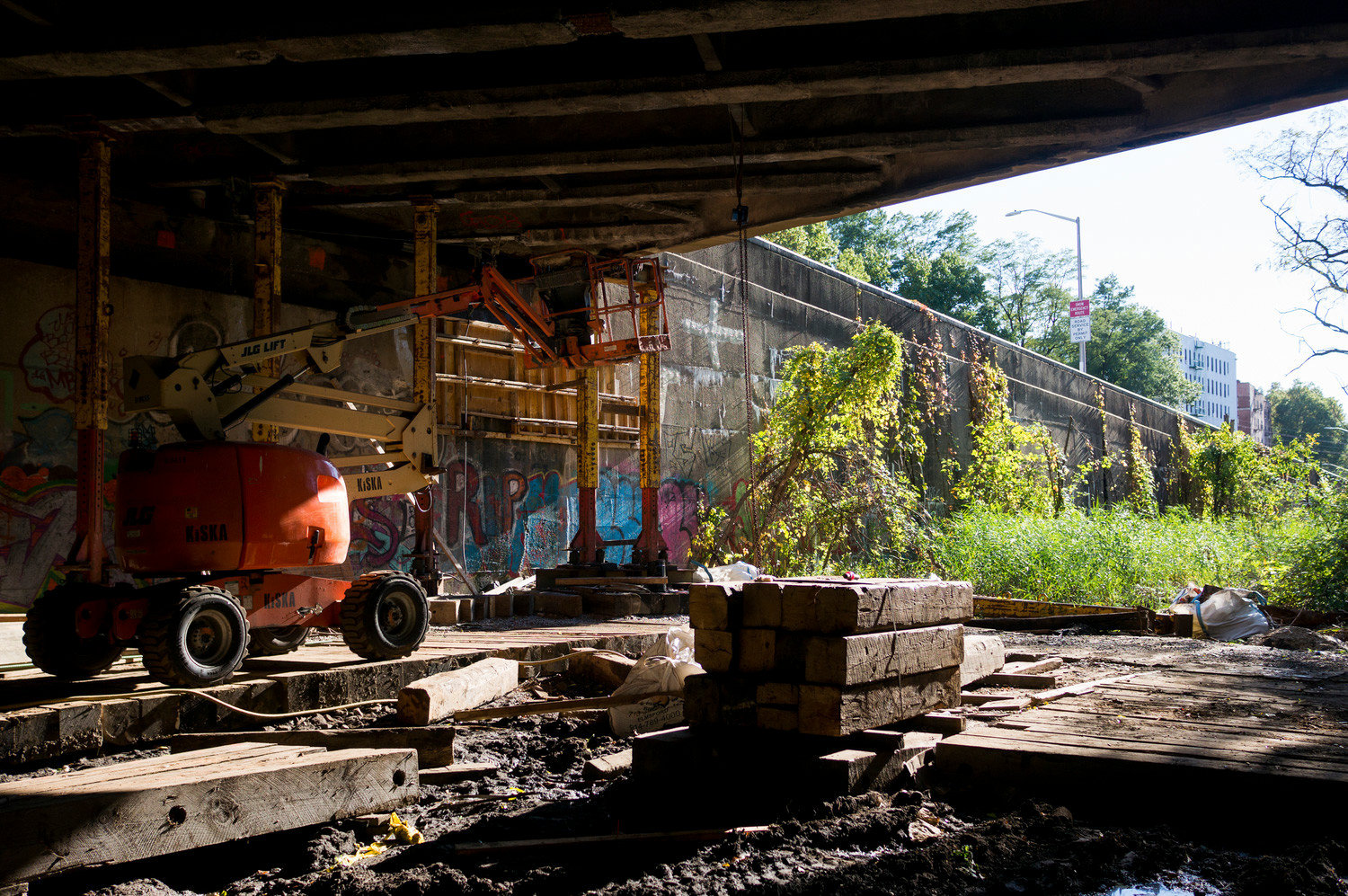 After years of waiting, CSX Transportation removed decades of trash and debris from what was once its Putnam Line tracks along the Major Deegan Expressway. After years and years of negotiations, the company has finally agreed to sell the property for $11.2 million.
JULIUS CONSTANTINE MOTAL/ File 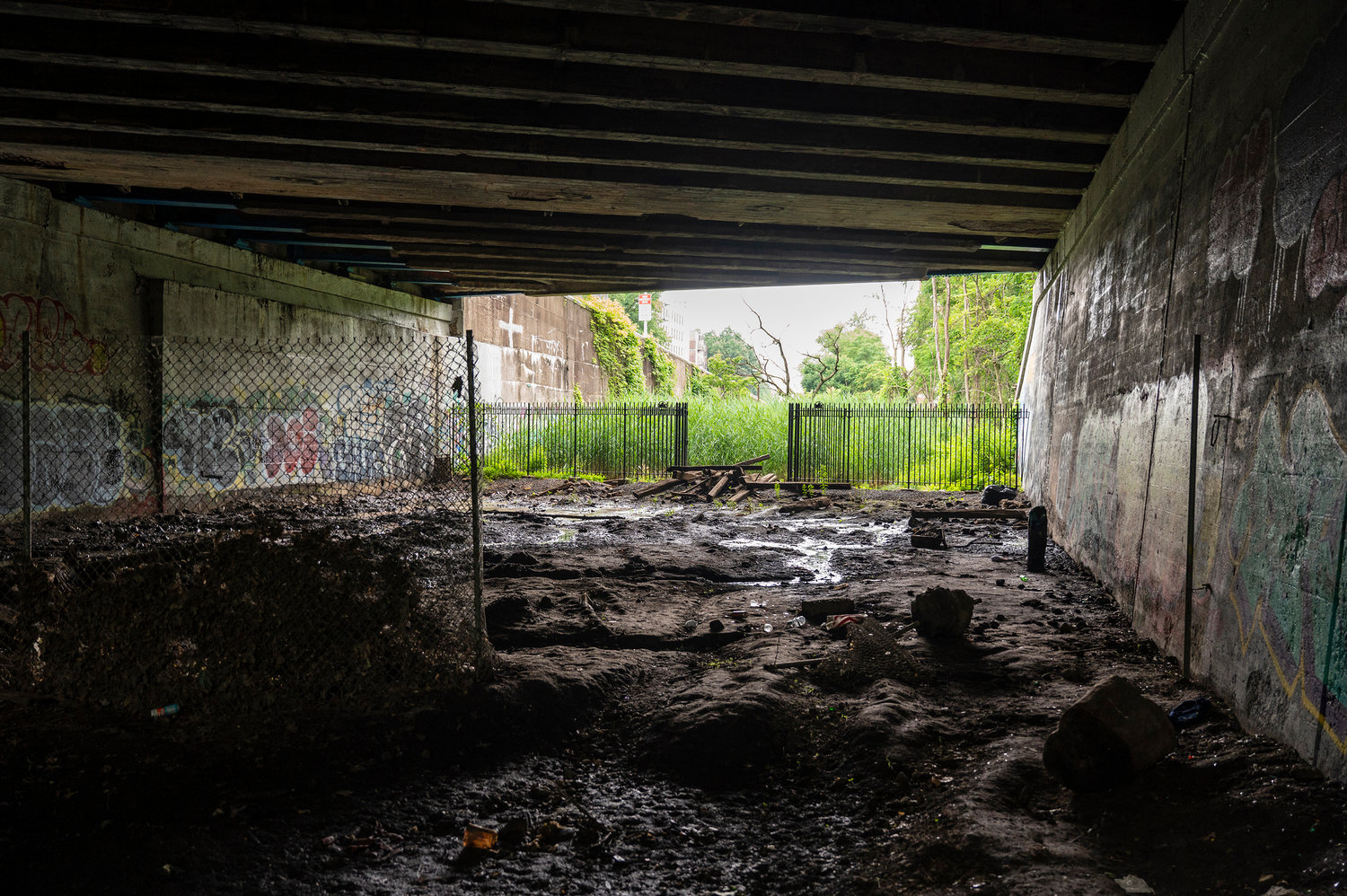 An area of the Old Putnam Trail that will be getting a facelift once the city begins daylighting Tibbetts Brook in 2025.
Hiram Alejandro Durán
Previous Next
By Sachi McClendon

The city is finally poised to purchase a mile or so stretch of vacant land between Van Cortlandt Park South and West 230th Street to clear the way for a new greenway running alongside the Major Deegan Expressway.

With the property now securely in its hands, the city has finally overcome a major hurdle in its quest to transform the abandoned property into the largest green infrastructure project ever undertaken by the city.

In a public meeting on Nov. 9, the Department of Citywide Administrative Services announced that the city will purchase the property for $11.2 million. CSX Transportation, the property owner, has agreed to the price and signed the papers.

The next steps in the process are more-or-less a formality. After receiving “mayoral approval,” the city has to countersign the contract, which will then be sent to the law department for final approval, according to the Department of Citywide Administrative Services. “This is consistent with all acquisitions of this nature,” said a spokesperson for the agency.

But the deal didn’t transpire overnight. Negotiations between the current owners, CSX transportation, and the city stalled starting in 2011 after the railroad company had been asking $10 million for the land — well beyond the $2 million the city had set aside at the time for the entirety of the greenway project.

Then in 2018, CSX backed out of a deal to have an independent appraiser come in to determine a fair price. That drew criticism from Sen. Chuck Schumer who turned his attention away from Washington to pressure the company into loosening up on its hardball tactics.

“We’re telling CSX, ‘Stop blocking the tracks and take yes for an answer,’” the senator said at the time. “We cannot allow this project to be delayed just ‘cause CSX wants to squeeze a few more pennies out of the community.”

Still, the property ended up going for more than the $10 million CSX had initially offered. DCAS would not confirm whether or not an independent appraisal had been conducted to determine the agreed upon price.

Through a process known as “daylighting,” the departments plan to resurface a large section of a stream, known as Tibbetts Brook, that was buried underground more than 100 years ago, and have it travel from the southern tip of Hester and Piero’s Mill Pond all the way down to West 230th Street. By bringing it to the surface, the brook will no longer be connected to a sewage line running  beneath Broadway, but will flow directly into the Harlem River — as it did over a century ago before being shoved underground.

Running alongside the stream will be a new greenway full of pedestrian paths, benches, overlooks and educational signage.

In order to daylight the stream, the city will also make some significant changes to the bottom section of Van Cortlandt Park.

“We are incorporating pocket wetlands, viewing overlooks, and adding in some entrances to give more flexibility in how people enter the park and enter the pathway,” said Dahlia Thompson, an outside consultant who led part of the presentation.

“This momentous development has been decades in the making and could not have happened without the leadership of NYC council member Eric Dinowitz,” said Stephanie Ehrlich, who is the head of the Van Cortlandt Park Alliance, which has been a vocal supporter of the project. “Van Cortlandt Park Alliance’s bold advocacy took the daylighting project above ground, instead of relegating it to an underground pipe, as originally designed.”

Yet there are still a number of challenges in store for the city. At a meeting on Oct. 17 — before a deal with CSX had been announced — the city provided an update on the current status of the project, including some peculiar challenges it will have to address when daylighting the brook.

In particular, between West 233rd and West 231st streets, there are two privately-owned buildings that are already prone to flooding, one of which has windows that are at the same height as the proposed elevation of the steam. “And then the embankment for the open channel would actually be three feet higher than the existing window,” said a city official at the meeting. “So we’d be blocking off that window.”

Going off of the most up-to-date timeline, the city is hoping to begin construction on the daylighting portion of the project in Winter 2025.