Damaged kitchen brings with it flood of emotions 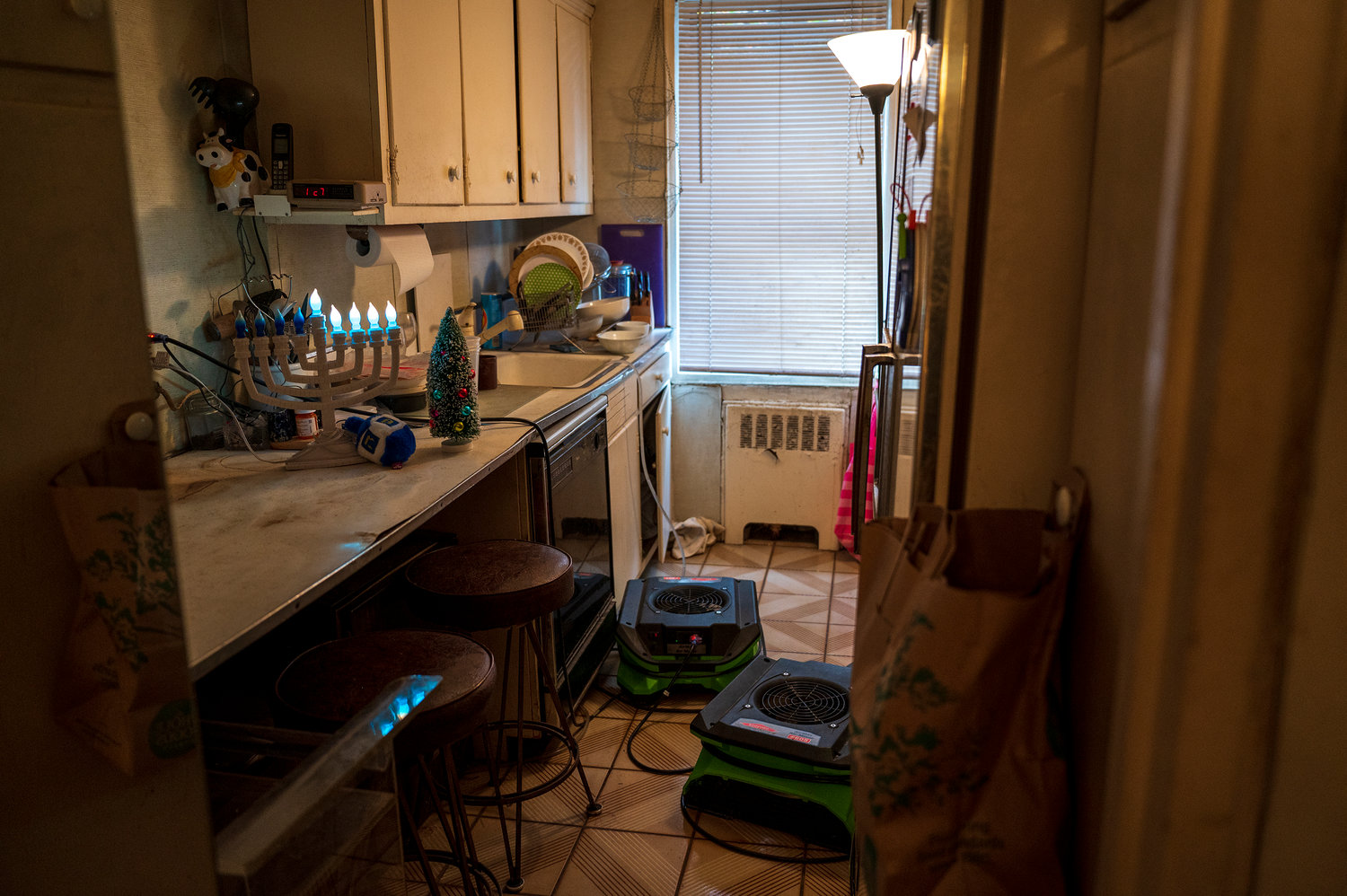 Murray and Rita Hyman’s apartment at 3720 Independence Ave., was flooded last November after what they say was a pipe bursting in their neighbor’s kitchen. Now their kitchen is in dire need of new floors, walls and appliances, they say, but the couple has yet to get answers from their building’s management about when repairs will begin.
HIRAM ALEJANDRO DURÁN 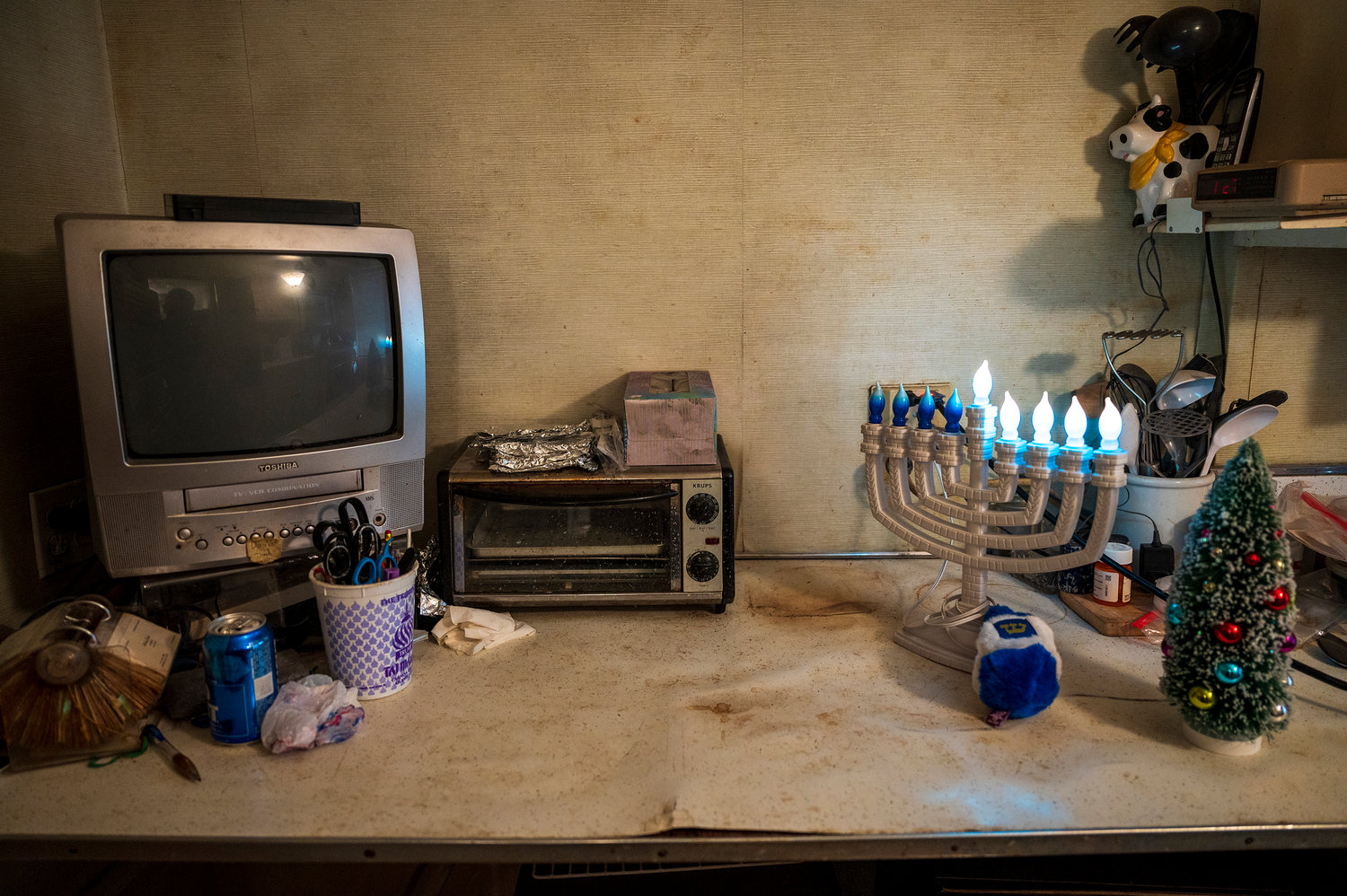 After a flood ravaged Murray and Rita Hyman’s kitchen last November, the couple continues to wait to have their floors, walls and cabinets replaced by their insurance company. The problem is no one has gotten back to them on what the scope of the work will be, and they have yet to hear back from anyone at the building’s management office, either.
HIRAM ALEJANDRO DURÁN
Previous Next

It looked like Niagara Falls gushing through the ceilings and walls.”
MURRAY HYMAN
Support journalism

Live in a co-op for 60 years, one might expect that if something breaks, management will be there to fix it immediately.

When water flooded the kitchen of Murray and Rita Hyman at 3720 Independence Ave., they thought repairs would be quick and easy.

“It’s been extremely difficult for us,” Murray said. “It’s been one disaster after another.”

The water first flowed in last November, and “it looked like Niagara Falls just gushing through the ceilings and walls,” Murray said. “I couldn’t believe it.”

As far as they can tell, a burst pipe in their neighbor’s kitchen is to blame. But for the Hymans, that’s not important — getting their own kitchen back into working order is. And after more than two months waiting, all they say they’ve heard from their building’s management company is silence.

While they waited, the Hymans tried to at least take some steps on their own. They brought in fans and dehumidifiers. But their real problem is the ceramic tile floor as well as their walls. Both have absorbed water, they said, and since November, have been a breeding ground for mold.

“This means that now my home is uninhabitable,” Murray said. “I certainly can’t stay there, nor can I keep paying maintenance for the place either.”

They now room with their daughter, Julie, and can’t move out until renovations are complete.

“We’ve had to throw out so many of our appliances because of the water damage that they sustained,” Murray said. “Nothing would turn on except the refrigerator.”

At first, Murray blamed what he thought was a lack of juice, believing the fire department had shut off power in the apartment. But even when electricity was restored, most of the appliances failed to turn on.

Robert E. Hill, which manages 3720 Independence, did not return a request for comment. Also not saying anything to the Hymans are the co-op’s insurance carrier, or even their own personal insurance. No answers about costs of repair, or even when repair work might begin.

They can’t even make their own repairs, because any such work would have to be cleared with the co-op first.

Murray and Rita Hyman, left, now stay with daughter Julie since the November flooding of their 3720 Independence Ave., co-op. Since then, the couple …

“It’s not as easy to go through an ordeal where both the problem and (solution) are out of your control,” Murray said. “And at my age, it’s not so easy to just have your life interrupted, and then have said interruption prolonged.”

Murray is an 80-year-old retired teacher on a fixed pension and Social Security. Rita will be 75 in March.

The Hymans weren’t alone. Four other units were damaged, including their upstairs neighbor Ronnie Levine.

“My biggest loss is the time it’s taking to repair some of the structural damage,” Levine said. “It really has taken a toll on my work, I’m currently writing a mystery novel I’ve had to put aside because I have to prepare to leave the place temporarily.”

Levine rents a stabilized apartment in the building – unlike the Hymans — but is now forced to remove her belongings as well because her apartment has become uninhabitable as well.

“There are square holes that were made in the ceiling to protect it from collapsing,” Levine said. “And there’s tremendous paint peeling off the walls.”

Yet where there isn’t paint is on Levine’s canvases — and she has a show in March.

“I need to finish some of the artwork that I’ve been commissioned for,” she said. “I actually want to work with the building. I don’t want to raise any issues with them. I do think they’ll come through and the work will be done.”

Murray is a bit more skeptical, but he, too, is seeking peace.

“I don’t want any problems with the building,” Murray said. “I just want to be able to go back to my home and live in a safe and healthy environment.”