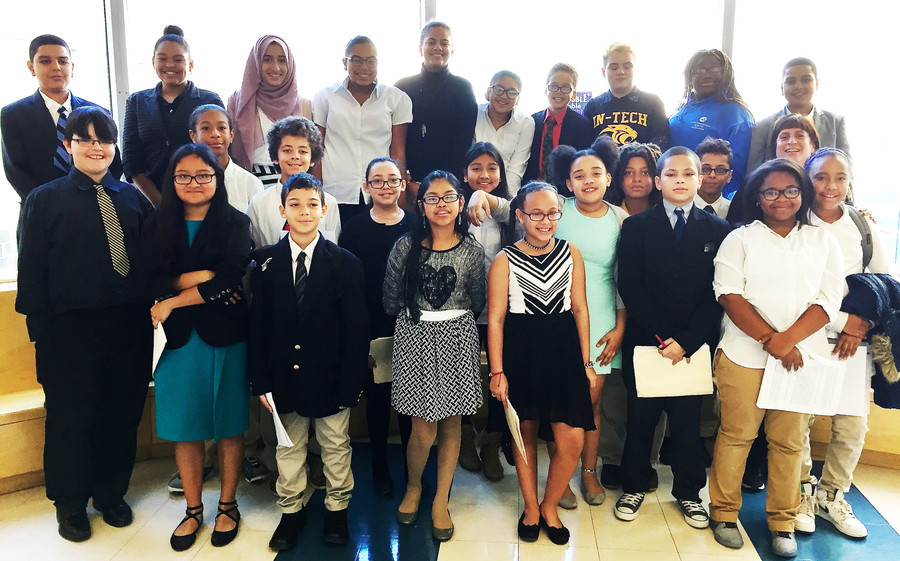 Students at IN-Tech Academy pose for a camera before starting their debate in government regulation of genetic testing. Educators, parents and students alike say that debates such as the one at IN-Tech held in November help improve academic performance and social skills--while they are also enjoyable for students.
Lisa Herndon
By Lisa Herndon

Should the U. S. federal government regulate genetic testing? Five hundred middle-schoolers from around the city argued for and against this hot-button issue during a recent debate at IN-Tech Academy in Kingsbridge, which serves sixth through 12th grade.

The event was a part of a partnership between the Education Department’s Middle School Quality Initiative and the New York City Urban Debate League.

The competition was already a winner with IN-Tech’s parents and students as they said the skills their children learned from the extracurricular activity boosted their grades, self-confidence and social skills.

“I’ve already seen the difference between elementary school and middle school and how much he’s already progressed,” said Diana Hernandez, whose son Jordan, a sixth-grader, joined the team this fall. “He was very shy in elementary school and now he’s more outgoing. He’s more [willing] to actually doing public speaking, which he never liked doing at all. He’s very excited and he’s very proud to be on the debate team.”

Rosanna Mella, whose daughter Kamilah was also debating for the first time, like Jordan, said she was “very excited and proud.” Being part of the debate team has inspired Kamilah to become more interested in academics and to enjoy the reading and research that goes along with preparing for competition, Ms. Mella added. Before the club, Kamilah was primarily interested in the arts, and now her interests have expanded to science and technology, Ms. Mella said.

“My favorite part about it is that when you talk about something, you can let your opinion out about something and you can just be yourself,” Kamilah said. She admitted past trouble in English classes, but said her grades are “in the 80s category.”

Obdulio Martinez, an eighth-grader who has been on the team since sixth grade, said his “speaking and reading and skills were not the best,” but debate helped him to catch up on those skills. “I learned how to read faster and read in a condensed amount of time.”

During the Nov. 19 debate, Obdulio was arguing for the government regulating genetic testing, saying the approach would lower the price of testing for low-income families.

Benjamin Minaya, who has been on the team for two years, said his favorite part of the debate was the crossfire section, during which he “gets to prove his opponents wrong.” He opposed government regulation of genetic testing, saying imposed guidelines would hamper creativity and the limit potential scientific breakthroughs.

IN-Tech’s debate coach and Middle School Dean Wendy Spector said the skills learned from debating also help writing, research, reading and speaking skills for participants. “It’s a structured environment to prove your point, to go back and forth. We all know that teenagers love to do that [and] prove their point,” laughed Ms. Spector. IN-Tech has participated in middle-school debates for four years.

According to figures from the Education Department, IN-Tech students' performance on the state English test has improved dramatically over the past couple of years. In the 2013-2014 school year, only 14 percent of middle school students at the Kingsbridge school met New York State standards on the state English test, compared to 27 percent in the city and 15 percent in the district. The following year, the number rose slightly to 16 percent, but then nearly doubled to 30 percent in the 2015-2016 school year.

More than 30 schools and 500 students took part in the day’s event, which is the group’s largest to date said Jenna Shumsky, executive director of the Middle School Quality Initiative. The program began four years ago with 10 schools and 200 students taking part.

Scott Moore, the Middle School Quality Initiative’s debate league director, said one of the goals of the middle school program is to spark and develop an interest in debating that will continue through high school. He cited his organization’s research that said the skills learned through debating also help to contribute to increased civic engagement and socio-economic growth. “Debate can be kind of a game changer…for students,” said Mr. Moore.

IN-Tech came in at fourth place at the competition and eighth-grader Andrew Skeete won second place for top speaker, according to the spokesperson for the school.