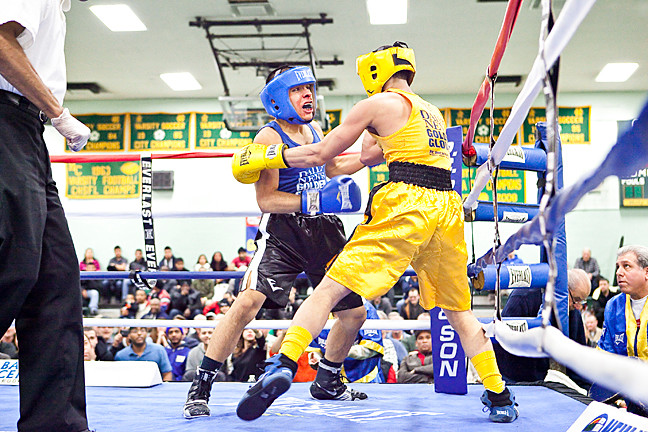 Bloodied and despondent after the first loss of his amateur career, Arnold Gonzalez made up his mind to quit boxing on the train ride from Holy Cross High School in Flushing to his Washington Heights home.

“Do I really want to put my body through this?” Gonzalez asked himself after shedding about 20 pounds and training day and night for the last two months.

Having been accepted to John Jay College of Criminal Justice, the 19-year-old has other options.

After his loss to Joel Lugo in the preliminary round of the New York Golden Gloves in the 141-pound novice weight class on March 7, Gonzalez texted an apology to Joe Brender, who runs the Astral Boxing Club in Kingsbridge where he works out. The next day, he put on sweats and thermals and went for a five-mile run. The day after that, he worked out three straight hours.

Turns out Gonzalez isn’t ready to give up on his dream yet.

“I’m 100 percent sure I can make the big bucks in boxing,” said Gonzalez, who currently has a part-time job serving frozen yogurt on the Upper West Side. “I really want to turn it into a career. It’s not just a hobby for me.”

Never wanting an office job, Gonzalez, who was also a soccer player in his time at A. Philip Randolph High, began his progression in the pugilistic arts two years ago. He won his first four amateur fights, including a three-round decision over Hamza Camara in his first Golden Gloves fight in February.

Then came the bloody nose.

Gonzalez said he was fighting with a hyperextended left elbow, but still believed he was outboxing Lugo in the first round. But with less than 10 seconds left in the round, Lugo landed a solid right hand to Gonzalez’s nose.

Struggling to extend his arm when throwing his jab, Gonzalez was left without his best weapon as blood streamed out of the busted vessel in his nose. Still, his coach Dennis Milton — a four-time New York Golden Gloves champion who was 16-5-1 as a professional — thought his pupil was the fight’s true winner.