Dem club leaders ... forever and ever? 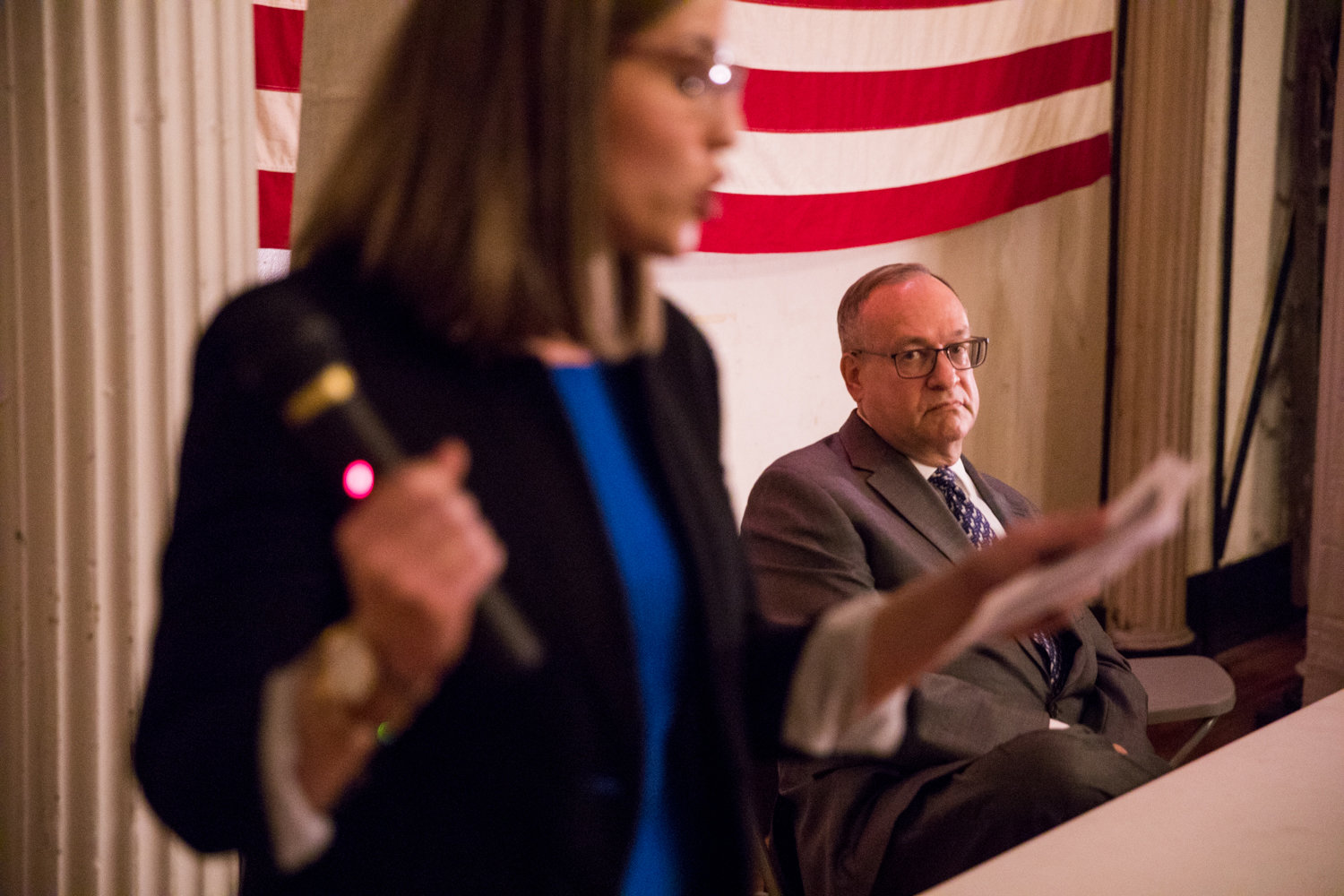 Anyone looking for a rematch in last year’s race for Benjamin Franklin Reform Democratic Club president between Morgan Evers and Michael Heller will have to wait indefinitely. The club voted to postpone its officer elections until likely after the coronavirus pandemic, but decided to move forward with city council endorsements.
JULIUS CONSTANTINE MOTAL/ File 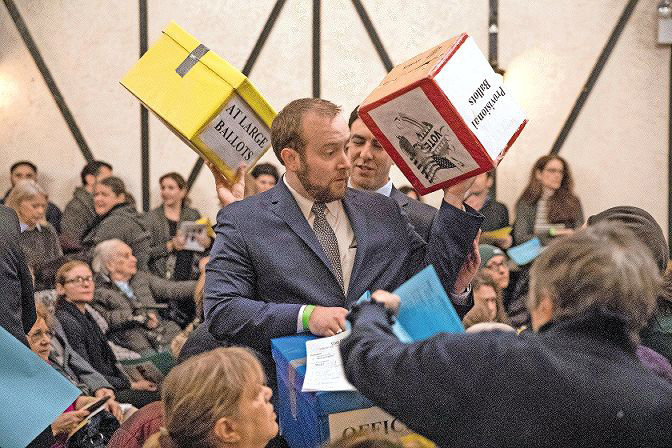 It didn’t take Michael Heller long to come up with plans not only to ensure the Benjamin Franklin Reform Democratic Club could vote on new leadership in January, but endorse someone for Andrew Cohen’s soon-to-be-open city council seat as well.

The plan? Borrow heavily from how state officials conduct mail-in voting every election cycle, and award winners simply on who gets the most votes.

The problem? The majority of Ben Franklin Club members who showed up to last week’s meeting online were all for backing a city council candidate. They just had no interest in voting on club officers like president, vice president, and the club’s powerful executive committee.

“I really would like to support the proposed procedures that you have outlined, particularly for the endorsement of the next city council person who would be our candidate,” said club member Helen Morik, who until last summer’s primary was a state committeewoman for the Democratic Party.

“But I really would like to say that I think we should postpone the club nominations and elections. I think having a dual process like this would be extremely complicated. And right now, I think we should concentrate strictly on the endorsements for city council.”

Heller’s proposed voting scheme — similar to what was proposed for endorsements to what’s expected to be a March special election — would allow those wishing to run for an officer position to collect signatures supporting a nomination. They would then be allowed to share a biography of themselves on the Ben Franklin Club website, and have a chance to make a brief presentation during an online videoconference meeting.

After that, club members would vote on a single ballot for all 23 positions, mail it to the club’s recording secretary in way similar to how absentee ballots are collected by city and state officials, and those with the most votes would win.

It’s different from the club’s existing officer election rules, which require numerous interviews by a nominating committee, along with nominations on the floor, and then club members would have to physically show up to cast a ballot. During this meeting, those who are not elected to higher office could then compete for other offices, like the executive committee, in subsequent ballots.

But making this change, Morik said, was just too much.

“We have in place officers and an executive committee,” she said. “I don’t think anybody would object to postponing the endorsement — the club elections at this time, and just concentrate on the endorsement for city council.”

Last January’s elections giving another term to Heller and other existing officers was challenged by what existing club leadership referred to as an “insurgent” slate led by Morgan Evers and endorsed by state Sens. Alessandra Biaggi and Gustavo Rivera. Although Evers’ slate likely received more votes than any other club officer election in recent history, the turnout to vote was record shattering, ensuring victory for the incumbents.

Evers has not indicated if she was intending to challenge Heller again, but if she does, it’s unclear when in 2021 that will happen — if it happens at all. The club ultimately backed Morik’s recommendation, approving Heller’s plan to endorse a city council candidate and extending officer terms for people like Heller until a date yet to be determined.

Those votes happened despite the concerns expressed by another club member, Jeffrey Otto. He wanted to table the vote, at least long enough for members to read and consider Heller’s proposal. Most of them, he said, didn’t even receive Heller’s proposal until the start of the very meeting they were asked to approve it.

“It seems to me that it’s inconsistent, perhaps, if we were able to decide one process was not important enough to going through this, and the other was,” Otto said. “Is it absolutely necessary that we vote to endorse a candidate? From my perspective, if we collectively think the answer is yes, then I think we should also — for purposes of fairness and trust in the process we’re proposing — I think we should also vote or candidates in a timely manner as we normally would.”

Dan Padernacht, one of the city council candidates ultimately seeking an endorsement from the Ben Franklin Club, told Morik that her priorities on what should come first was wrong. The special election in March would be good for less than a year, since whoever wins would have to immediately defend their seat in a primary election just a few months later while facing a general election in November.

In fact, just last year, the club decided not to endorse in the public advocate special election, Padernacht said, because of the large number of candidates, and the fact it would conflict with holding officer elections in January.

Sylvia Gottlieb, mother of another city council candidate, Eric Dinowitz, corrected Padernacht, claiming the club decided not to endorse ahead of a primary for public advocate last year because they didn’t know the results of the special election.

Minutes from that January 2019 meeting obtained by The Riverdale Press show the club choosing not to endorse in the public advocate special election because there were a large number of candidates running, and it would interfere with the club’s own leadership selection process.

“If we can vote for a special election endorsement,” Padernacht said, “then we can also do a vote for club officers.”

We’ll know when we know

After the meeting, Heller told The Press he was surprised by Morik’s motion. “I though we would do the whole thing,” he said. “But I think people thought about what it meant to have to go through this whole thing for officers, which is even more complicated in some respects — although the procedure that was passed was fairly similar.”

Heller’s role in rewriting club rules — even temporarily — was controversial initially because Padernacht and others felt such a decision should be made by the club, not just its executive committee. Even now, those same members believe a change to the bylaws — even a temporary one — should go through a standard process that usually requires two separate votes by club members.

Heller, however, disagreed, saying temporary measures in extraordinary circumstances doesn’t require those rules to be followed. He also couldn’t say when and how a vote could be picked up again to restart elections, only that all the club has to do is rescind the delay in doing officer elections, and his absentee ballot proposal would then become the new standard if the pandemic still limits groups.

“When it feels right, it will be right, I guess,” Heller said. “There’s no hard and fast rule as to when it will be right. But I think it will become fairly obvious when people believe they can go into a room and start talking to each other without having to sit 500 yards apart from each other.”

Cohen, who was elected to the Bronx Supreme Court, is expected to resign his council seat at the end of the month. When he does, Mayor Bill de Blasio will be tasked to call a special election, which is expected to take place in March.