Despite loss to unbeaten Marshall, no quit in Mathis, Knights 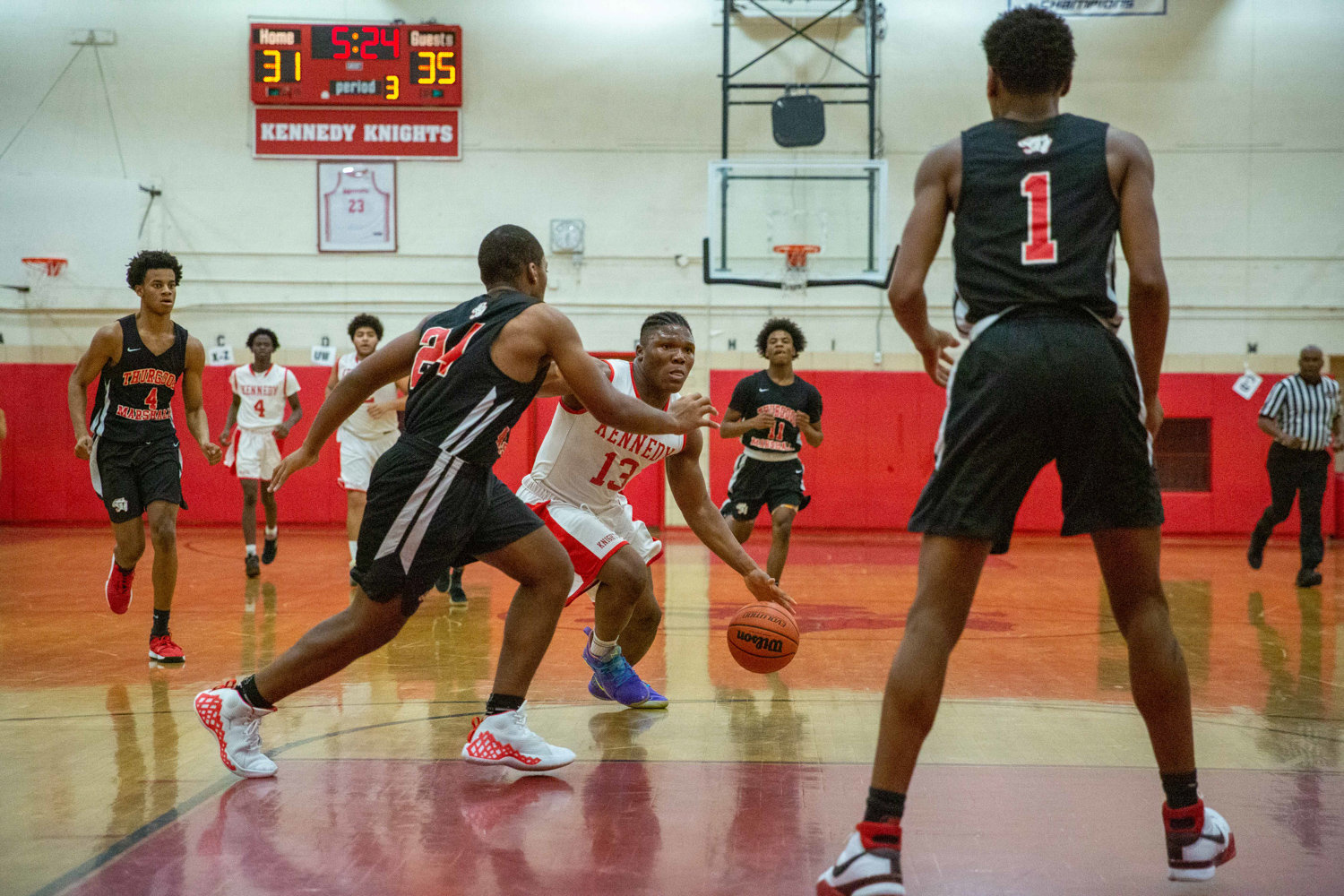 Kennedy’s Emmanuel Nkwocha looks to slice between a pair of Marshall defenders during the Knights’ 62-56 loss to the Panthers last week.
EIAN KANTOR 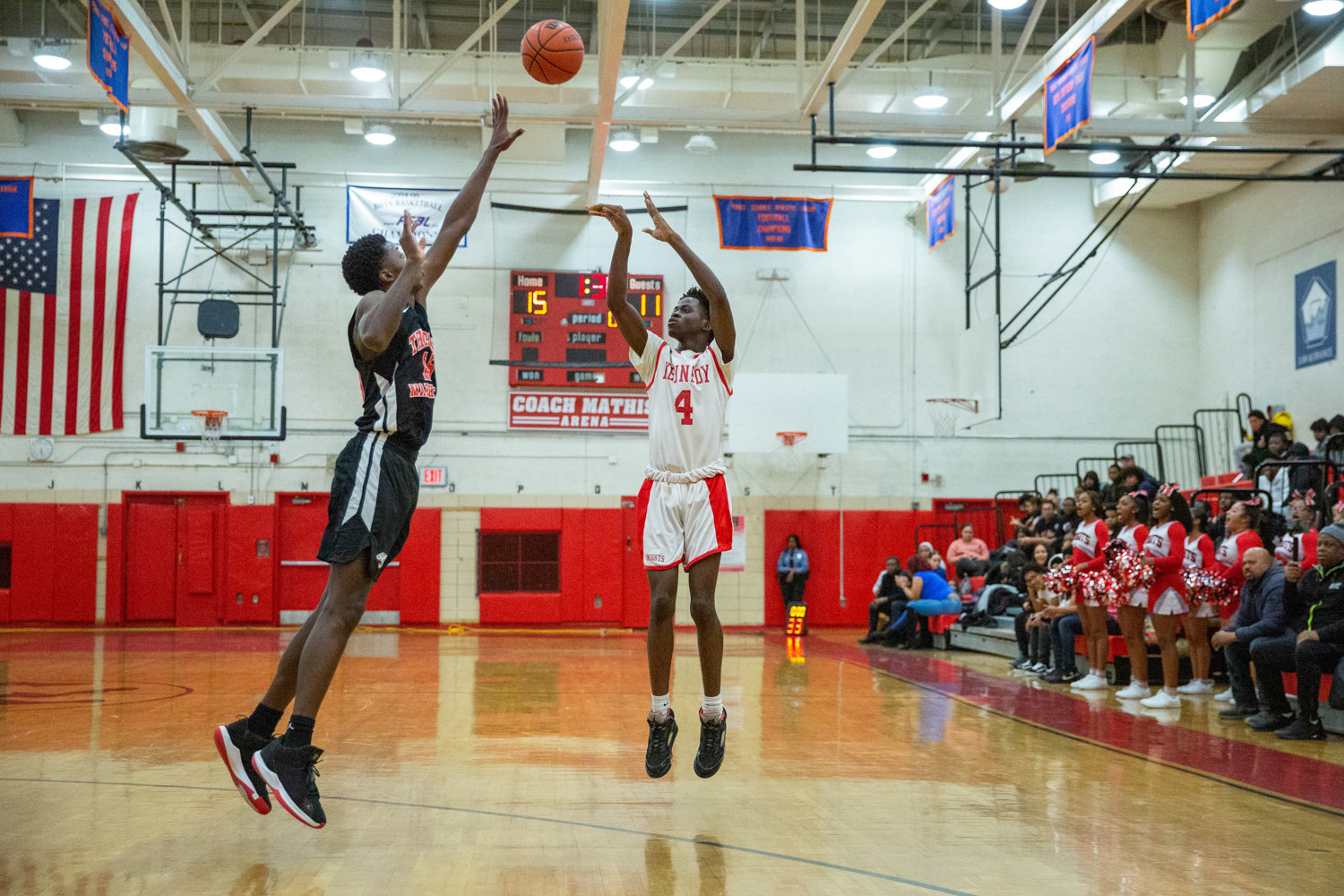 Kennedy junior Prince Asiamah soars above a Marshall defender during the Knights’ loss to the unbeaten Panthers last week.
EIAN KANTOR
Previous Next
By SEAN BRENNAN

The long-time Kennedy head basketball coach first touched on the health of key players Gregory Genross and Emmanuel Nkwocha, a pair of football players-turned-hoopsters for the Knights.

“Greg had a leg (injury) from football, but he’s better now,” Mathis said. “And Emmanuel is better now, but he had also been out for awhile.”

Then he ticked off the names of some other players who turned in strong performances against unbeaten Thurgood Marshall last Thursday.

“We have a young guy like Francis (Garcia) who I thought played very well today,” Mathis said of his junior guard, who scored 12 points, more than double his season average. “And Peter (Asare) also played really well. That was probably his best game since he came here.”

And while Asare scored a team best 17 points for Kennedy, it wasn’t enough to lift the Knights past Marshall. The Knights went toe-to-toe with the Panthers, giving them all they could handle before ultimately falling 62-56 at Kennedy.

“Some days these guys are very good and they’ve learned to play pretty well at home,” Mathis said. “So I think if we can keep getting (performances) like this, we still have a shot to do a little something.”

Mathis was talking about the postseason, of course. But after the loss to 9-0 Marshall, reaching the playoffs is an endeavor that is going to require some major work by the 4-7 Knights over their final four games of the regular season.

“We’ve got to start now,” Mathis said. The Public School Athletic League “takes the top four teams in the division. The last two teams don’t make it, so we still got a shot at it.”

Kennedy is currently clinging to the final playoff spot in the Bronx AA Division, holding a two-game lead over Monroe as the season enters the home stretch.

The problem for the Knights, however, is their schedule. Of their four remaining games, only Gompers — who Kennedy is slated to play on Jan. 28 — owns a losing record.

Still, Mathis seems undaunted by the Knights’ task at hand.

“We’ve got some tough games coming up,” Mathis said. “We’ve got to play like we played today. If we keep playing like this, we’ve got a shot. I liked the way we fought today. They played hard and they really played hard down the stretch.”

The Knights had a plethora of opportunities to pull off the epic upset of Marshall, but they repeatedly misfired on an array of layups and putback attempts that ultimately cost them the victory.

“We had our chances,” Mathis said, his trademark smile still in place. “We have to learn to finish better under the basket. So we’ve got to work on things every day.”

The reason for Mathis’ smile, even after a gut-wrenching loss, was because of something that occurred off the court. That type of news typically has not been the welcomed kind as the 76-year-old coach, who continues his battle with diabetes, currently gets around in a specialized shoe and a walker.

But the news he received early last week was better than any victory on the court as he welcomed his new grandson, Johnny Mathis IV, to the world.

“We’re going to keep it going,” Mathis said of the family name.

Mathis will soon be getting a custom-made shoe to support his surgically altered left foot. And once that happens, he’s expecting to be even more mobile.

“Then I’ll be able to walk a lot better,” Mathis said. “I can walk now, but I still use (the walker) just to be on the safe side. My doctors are always warning me about not falling. At my age that’s not good.”

Mathis has no plans to call it a career anytime soon as basketball remains a big part of his life. And there’s also that playoff spot to chase this season.

“As long as I feel good, I’ll keep going,” Mathis said. “I’m much better now. My foot is finally healed. With diabetes it can take a long time, and it did. But I’m good now.”

Is he good enough to stick around long enough to see Johnny Mathis IV make his debut in a Kennedy uniform?

“I’ve got to see if I can live that long,” Mathis said with a hearty laugh. “We’ll have to see about that.”