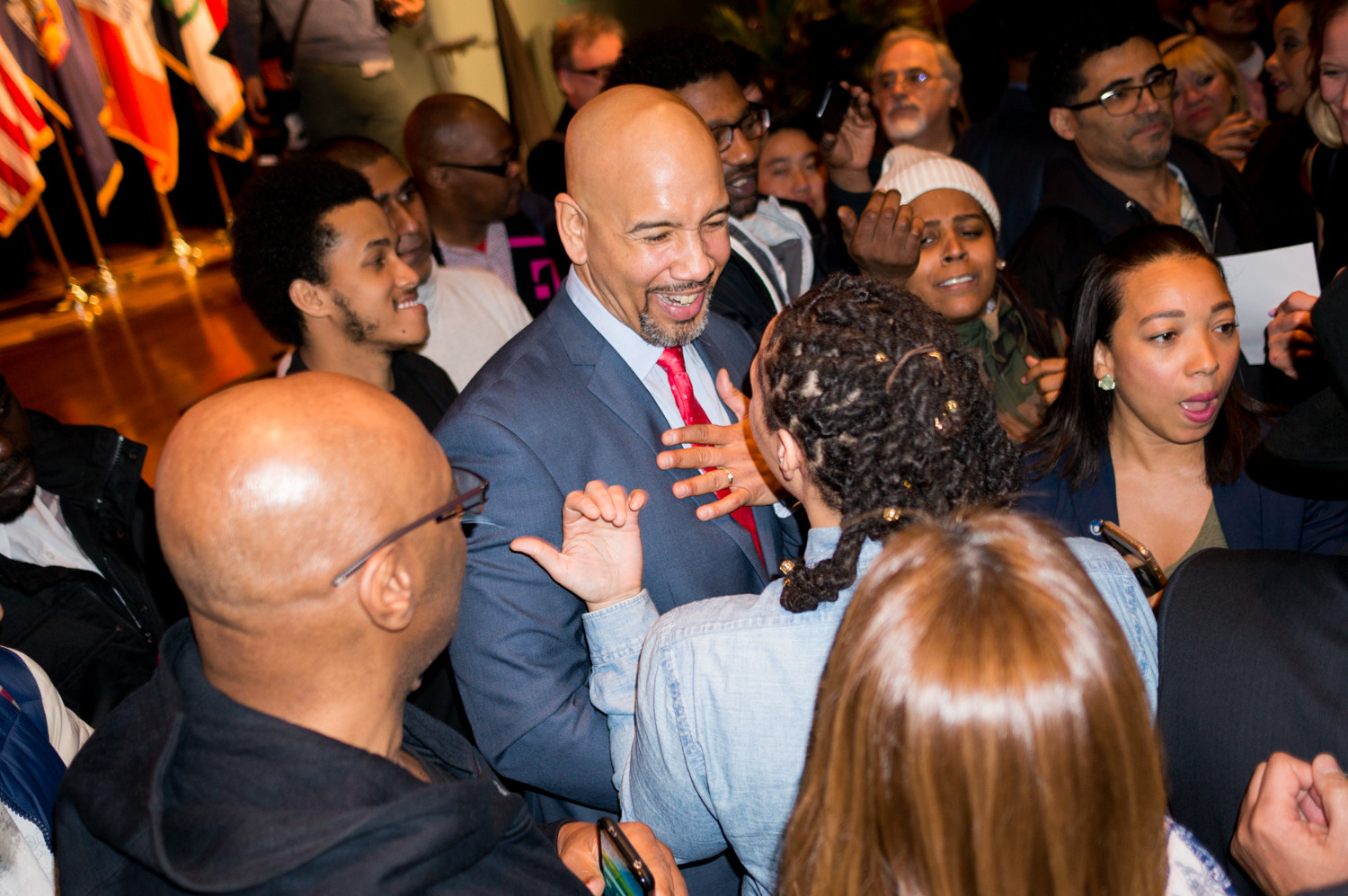 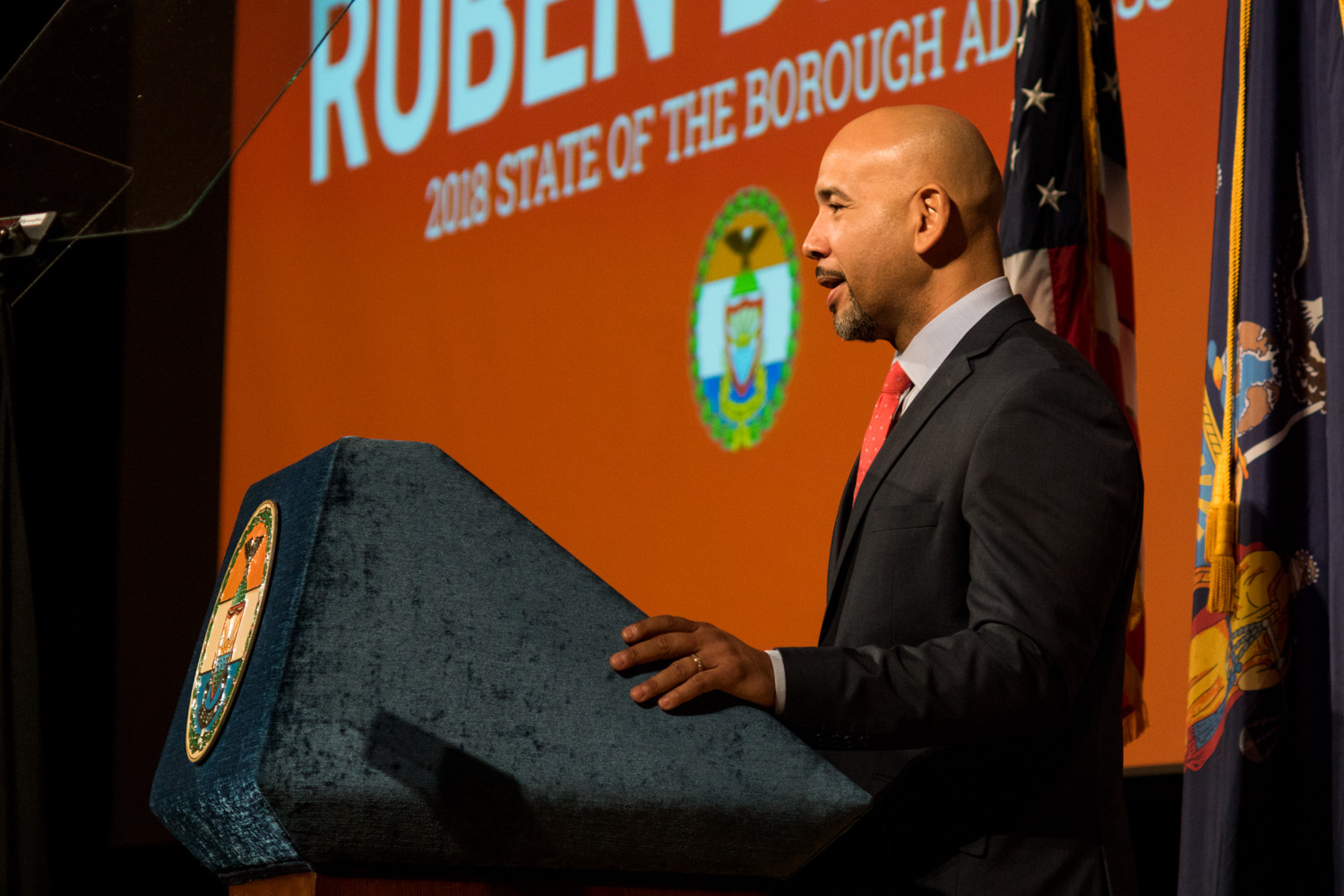 Bronx borough president Ruben Diaz Jr., talks about the strides the borough has made in the last year. One bright spot is the growing economy, with unemployment cut in half, plummeting to 5.5 percent, and more than 110,000 people finding jobs since Diaz took office in 2009.
JULIUS CONSTANTINE MOTAL 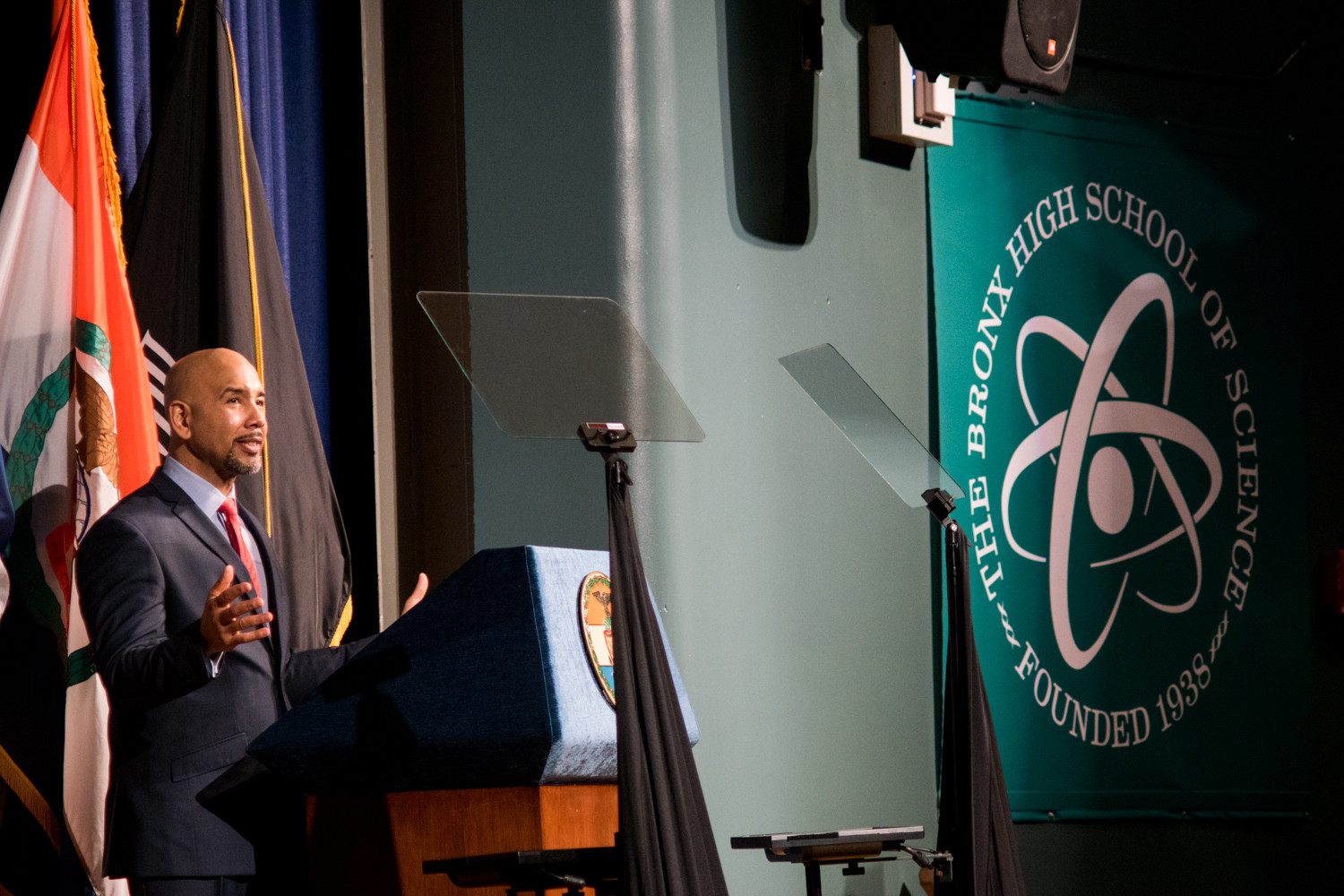 Bronx borough president Ruben Diaz Jr., gives a rousing conclusion to his state of the borough address at the Bronx High School of Science. Having attracted billions of dollars in infrastructure spending, creating thousands of new jobs, helping new businesses expand, and becoming a destination for visitors from around the globe, Diaz called the borough’s future bright.
JULIUS CONSTANTINE MOTAL 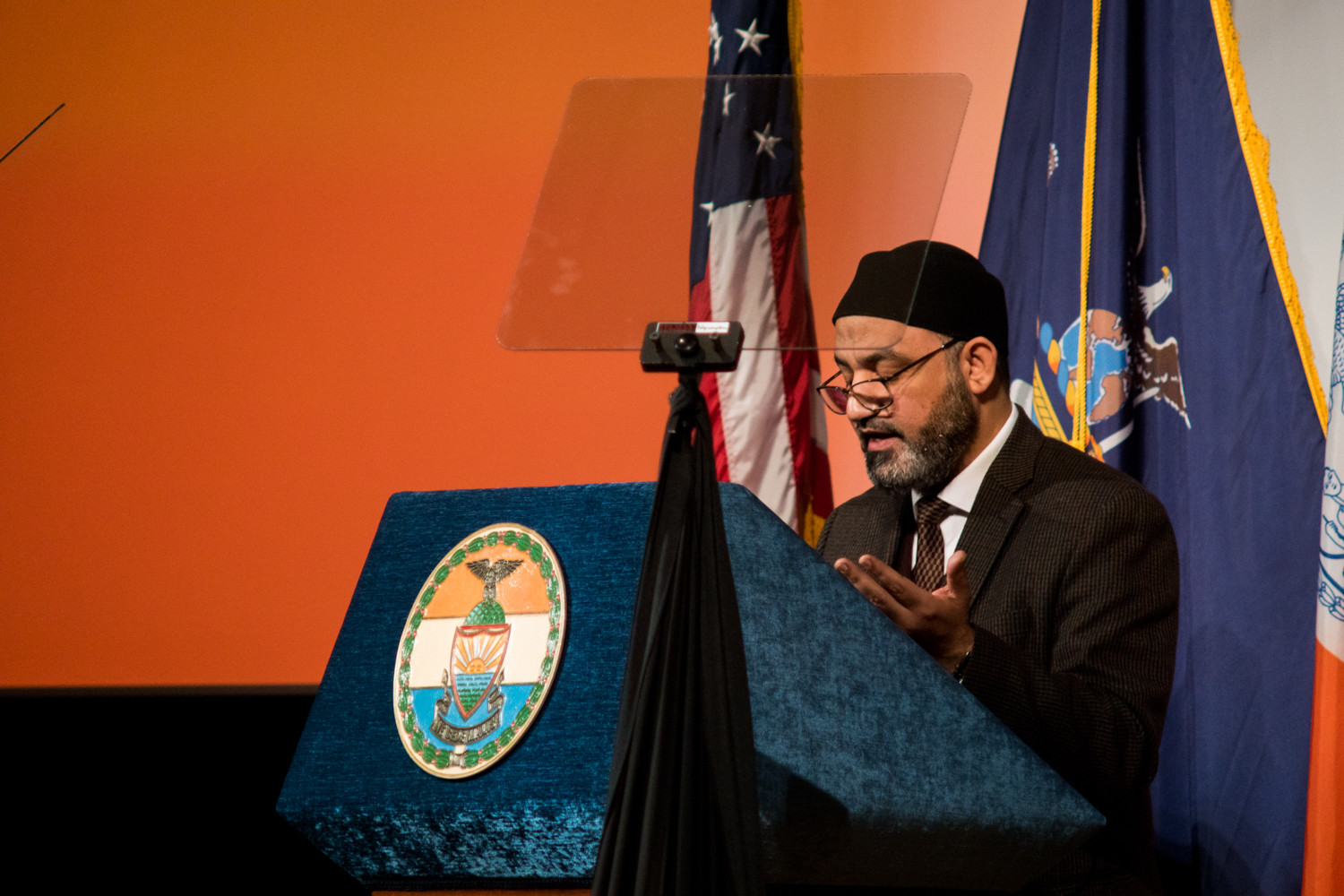 Ali Kamel, an imam at the Muslim American Society’s Upper New York subchapter, raises his hands in prayer as he gives the invocation before Ruben Diaz Jr.’s state of the borough address at the Bronx High School of Science.
JULIUS CONSTANTINE MOTAL
Previous Next
By ZAK KOSTRO

The Bronx is enjoying a groundbreaking resurgence on many fronts, but there’s still a lot that can be improved.

So said borough president Ruben Diaz Jr., taking the podium for his ninth state of the borough address last week at the Bronx High School of Science.

“So far, we’ve done great things,” Diaz said, dapper in a trim suit and red tie. “I stand here proud to report that we executed a transformative agenda that has elevated every neighborhood and community in this wonderful borough. We’re keeping people in their homes, building new housing units for a diverse population, and setting the standard for tenant protection for the city.”

Diaz tackled a number of issues in his state of the borough, especially affordable housing, the painfully underserved New York City Housing Authority, education and youth initiatives, and unemployment — which is down significantly in the Bronx.

He also shared his thoughts on diversity, immigration, pushing for passage of the state’s Dream Act and federal DACA legislation, putting an end to gender and race discrimination, and the city’s much-addled public transportation.

“Our straphangers are barely hanging on,” Diaz said, adding that “fair fares” need to become a reality in helping the working poor.

“We should be making it easier for the economically disadvantaged to find jobs and climb out of poverty.”

One way would be through the expansion of City Ticket, which provides reduced fares on commuter rail, to every day of the week, making rides on services like Metro-North cheaper.

Diaz also stressed his commitment to paving a road to success for young people. That starts with a great foundation, he said, meaning the best in public education and job training for “all our youth, regardless of where they live.”

“We are engaging and challenging more students,” Diaz said, encouraging them to make the leap into civic service joining their local community boards, an opportunity that has been open to teenagers since 2015, after state legislators lowered the minimum age from 18 to 16.

Diaz also heralded the Bronx’s growing economy, noting unemployment has been cut in half, down to 5.5 percent. More than 110,000 people have found jobs since taking office in 2009.

On top of that, the borough is safer. For the fifth straight year, the Bronx saw less than 100 homicides — only three of which happened in the 50th Precinct, where grand larceny was the leading crime. And the number dropped to an all-time low last year, reflecting citywide trends.

“We have done this compassionately,” Diaz said, “and with a commitment to a fairer, more humane criminal justice system.”

These changes, Diaz said, are staggering — especially considering they were achieved in less than a decade.

“Look at how different things are,” he said. “We have set the bar for the entire nation on transformative urban renewal and redevelopment. We are the new standard for revitalization.”

But it wasn’t all good news to report from last year.

Among the biggest challenges facing the borough are a homelessness crisis, public school students whose needs are not fully met, and significant health disparities. And if these issues at home weren’t enough, there looms “a once unimaginable threat in Washington.”

Yet, Diaz said, these are conquerable. An innovative government acts as a safety net, focusing on a number of things, including education.

“The New York City public school system has served as the backbone of this city since 1805,” Diaz said, and with more than 1 million children relying on it for a ladder into higher education and the workforce, the borough needs to evolve.

“Inequality on this front is a major issue,” Diaz added.

Graduation rates are up while dropout rates are down, but there needs to be renewed focus on math and reading, where Bronx scores are still the lowest in the city.

“Too many of our public high school graduates are still inadequately prepared for the future,” Diaz said.

Diaz provided more than $20 million for borough-wide technology and auditorium upgrades this year, having allocated more than $60 million in funding to nearly 400 schools since taking office.

“Think of all the nurses from Lehman who could contribute their talents to the health and hospitals corporation,” Diaz said.

“We must build the bridges to success through synergy.”

But perhaps the most glaring problem confronting the borough is the egregiously underserved residents of the New York City Housing Authority — and providing them with at least a modicum of dignity, respect and decent living conditions.

NYCHA is “facing a crisis of confidence,” Diaz said. “Crime persists. Buildings are dirty. Repairs are late, if they are made at all. And, of course, residents are being left out in the cold.

“Just when you think it couldn’t get worse, you find out the city has failed to properly inspect apartments for lead paint, putting children at serious risk.”

NYCHA officials say their hands are tied, according to Diaz, but so far haven’t provided a viable solution to the boiler issue, where nearly half of all boilers in NYCHA’s developments citywide need to be replaced immediately. That’s leaving residents in places like Marble Hill and Fort Independence houses shivering.

“We are turning up the heat on NYCHA to act as a responsible landlord,” Diaz said. “And if they refuse to do so, I call on the governor to do it for them.”

Looking ahead, Diaz painted the Bronx as an exemplar of economic upward mobility that resonates well beyond the boundaries of the borough and even the city.

“Our future is bright. We will stand on the right side of history, and nothing can hold us back.”